For all those who worried that their beloved game was on the wane, 1994 marked the second coming of soccer in America, and Washington leaders were soon positioning their state to be at the forefront.

Sparked by a tremendous turnout for USA-Russia international friendly and underpinned by one of the largest playing youth populations in the nation, there was a movement to bring back a top-level professional team to Seattle. Meanwhile, two pro teams were already in the works. That's a bright contrast to the preceding four–and some might say 10–years.

Since the demise of the original Sounders in 1983, FC Seattle Storm and the Tacoma Stars sought to fill the void for fans. Still the amateur ranks thrived in the Eighties and early Nineties. Washington Youth Soccer participation figures grew 20 percent from 1983-94, and more adults than ever were active in the game. However, no spike in popularity compares to the 12-month gain from 1994 to '95. Nearly 10,000 more kids and in excess of 200 teams were added to the rolls, and obviously the sport's dramatically heightened visibility was a huge factor.

When 43,651 souls found their way to the Kingdome to see the World Cup-bound teams of the U.S. and Russia face-off on Jan. 29, it was a celebration of community as much as anything. National broadcasters and U.S. players remarked that not only was it a large, loud crowd, it was the most pro-American throng in recent memory. For the record, it was Washington's largest soccer gathering in 14 years. Furthermore, it was an opportunity to see a native son return home. Chris Henderson of Everett was a USMNT starter that night, which ended with a 1-1 draw.

The carryover was reinforcement of the state soccer community's size and passion, and that got the attention of U.S. Soccer and Major League Soccer leaders. They were soliciting bids from communities wishing to secure franchises for the first MLS season, in 1996. Immediately after the match, a 'Soccer Summit' of state leaders was convened for the purpose of organizing an MLS bid. Despite a late start, Seattle submitted a competitive bid, the lack of a suitable stadium was a notable soft spot. Husky Stadium and Memorial Stadium were both far from ideal options. As it turned out, when ceiling tiles began to fall from the Kingdome ceiling later in 1994, it may have proven a boon to eventually landing an MLS club.

Fans wouldn't have to wait for MLS to see the return of pro soccer. The Seattle SeaDogs spent the year preparing for their 1995 start indoors. As for the full-field, traditional game, former Microsoft executive Scott Oki and former Seattle coach Alan Hinton brought back the Sounders brand, launching their first A-League season in July and featuring a Who's Who of Washington players in their lineup. Better still, the born-again Sounders boasted both the league's best record (14-6) and best attendance (6,347), including a sold-out Memorial for their final regular season home game.

With the arrival of a World Cup in America for the first time, great excitement spreads across the continent and ushers in a new era. The Sounders name is reborn and the drive for an MLS franchise takes its first steps.

Seattle Pacific University receives a $2 million gift for construction of a soccer/track facility from the M.J. Murdock Charitable Trust. The gift equals the largest ever given by the trust and the largest single cash gift ever received by SPU. Since starting in 1968, SPU men's soccer has never had a home field.

Washington and Washington State each post road upsets in their NCAA women's tournament debuts. The 18th-ranked Huskies blank No. 15 Oregon State, 3-0, and the No. 19 Cougars oust No. 11 Wisconsin, 3-1.

Lisa Gozley is hired as women's coach at Washington State, replacing Lisa Fraser, who resigned to take over at Arizona.

Despite beating Colorado 4-1 in the second game of the semifinal, the Sounders' playoff run ends in a series-determining shootout, 2-1. Dick McCormick and Jason Dunn each scored twice in regulation.

Olympia's Kasey Keller, voted MVP of Millwall in the English League First Division, is denied a tryout for the USMNT. The U.S. will host the World Cup. Keller had served as a back-up goalkeeper in 1990.

Seattle's Bernadette Noonan, a native of Ireland, is honored as one of 24 foreign-born U.S. residents who made outstanding contributions to the growth of soccer prior to the Italy-Ireland World Cup match at East Rutherford, N.J. Earlier in the week, she met soccer legend Pele at a reception, and Noonan, the only woman honored as a "soccer ambassador," received the most applause.

Seattle's Michelle Akers scored two and assisted on two other goals as the defending champion USWNT secured passage to Sweden '95 by drubbing Jamaica, 10-0, in a CONCACAF semifinal in Montreal. Akers was later named tournament MVP following 6-0 victory over Canada in the final.

Chris Henderson, 23, of Everett is one of three final cuts to the U.S. roster for the World Cup. "No matter what happens, I've got a career," Henderson, the youngest member of the 1990 team. "I'm going to be playing for a long time."

Kicking off the MLS bid campaign in earnest, local organizers mail some 70,000 ticket sales brochures to Seattle soccer fans in hopes of gaining their support. If they can reach the goal of 10,000 ticket deposits by May 15, they will be eligible to gain one of 12 charter franchises in the new league.

Jason Dunn is named A-League Rookie of the Year after scoring 10 goals in his first season out of Seattle Pacific, and Alan Hinton is voted Coach of the Year for guiding the Sounders to the regular season title.

Debut in the Woodshed

After playing their first four away, the Sounders make their home debut in the Tacoma Dome. David Hoggan and Gary Heale, who once starred for the Tacoma Stars, score in a 2-0 victory over the Colorado Foxes.

Not For Men Only

A Leader of the Pack

Unbeaten for 57 games over three seasons–the best run in the nation–Shorecrest's streak of girls state championships comes to an end. Kennedy upsets the Scots, 2-1, in a 2A state quarterfinal playoff at Highline Stadium. Shorecrest had allowed only two goals the entire season.

Seattle becomes the eighth team in the American Professional Soccer League, otherwise know as the A-League, and takes the name of the former NASL club, the Sounders.

Confronted with a price tag double of previous estimates, Washington AD Barbara Hedges suspends plans to build a 3,000-seat soccer stadium. Originally slated to open for the 1994 men's and women's seasons, construction estimates climbed to $3 million. The budget was $1.2M.

The Sports and Events Council of Seattle/King County organizes a "soccer summit" and notifies Major League Soccer it will begin the process of bidding for a charter franchise. Meanwhile, the Sounders report orders for 1,500 season tickets, despite not having a home or schedule.

Lacking a suitable facility, Seattle is bypassed by Major League Soccer in determining its final cities for its inaugural season of play, in 1996.

Before a record crowd of 3,155 at Husky Soccer Field, 8-time defending NCAA champion North Carolina ends Washington's 15-game home win streak, 2-0. "We had our chances," UW coach Lesle Gallimore said. "We weren't nervous or intimidated. We didn't panic. The best thing about this match is that is shows us we can play with the best of them."

Seattle submits its bid for an MLS club backed by 1,300 season ticket deposits. However, the area lacks a suitable long-term stadium option.

A sellout crowd of 11,874 in Memorial Stadium cheers Seattle to a 3-0 victory over Vancouver, clinching the A-League regular season title in the Sounders' first season. Nineteen of the 25 roster players came through Washington Youth Soccer Association.

Jason Dunn and Marcus Hahnemann, former teammates at Seattle Pacific and fellow rookies for the Sounders, earn call-ins for the national team. Bellevue's Hahnemann starts and Olympia's Dunn comes off the bench in a 1-0 friendly at Port of Spain, Trinidad & Tobago.

The Northwest Collegiate Soccer Conference disbands after 23 seasons. The NCSC featured divisional alignments for Division I, II, III and NAIA men's, women's and club programs, including a promotion/relegation format.

Defending champion Seattle Pacific surrenders a 2-goal, second-half lead and the title to Oakland (Mich.) in overtime, 6-4, at the NCAA Division II semifinal in Tampa. The 5th-ranked Falcons had taken a 4-2 lead in the 59th minute on Phil Bullard's third goal.

Throughout the state, fans of all ages begin flocking to TV screens as World Cup USA begins. Anticipating increased interest, ethnic restaurants, taverns and clubs extend hours and upgrade their big screens. The July 17 final rates a 9.5 rating in Seattle.

Washington names Lesle Gallimore, women's soccer coach at San Diego State University for four seasons, as Huskies' new coach. Gallimore, 30, replaces the Dang Pibulvech, who had started the program and guided it to a No. 19 national ranking after three years.

“
I wish we could play in front of this crowd every week. They're loud, they've got passion. Fans elsewhere could take a lesson from Seattle.
— Alexi Lalas, USMNT player after Russia friendly
“
What we're saying is, get 10,000 season tickets committed. Then we'll come in and make it work.
— Hank Steinbrecher, U.S. Soccer executive director, regarding Seattle's bid for an MLS franchise
“
Kids need to see soccer on a high level. That's what kept me going and focused on making a pro team. Kids need something to shoot for.
— Chris Henderson, Everett native and USMNT player
“
More kids try it when they are young and stick with it. I can tell it's growing. There is always a shortage of fields, and it's hard to get coaches, but there is never a shortage of players.
— Steve Friebel, Northwest Soccer Camp co-director
“
They are sold on football (at UW), but there are days when football isn't playing. That's something that has to be a priority - selling them on all sports.
— Dang Pibulvech, departing UW women's coach
Collegiate Men's Records
Collegiate Women's Records
Founders Cup Winners
State Youth Recreational Cup Winners
Washington State Youth Champions
WIAA Championship Games 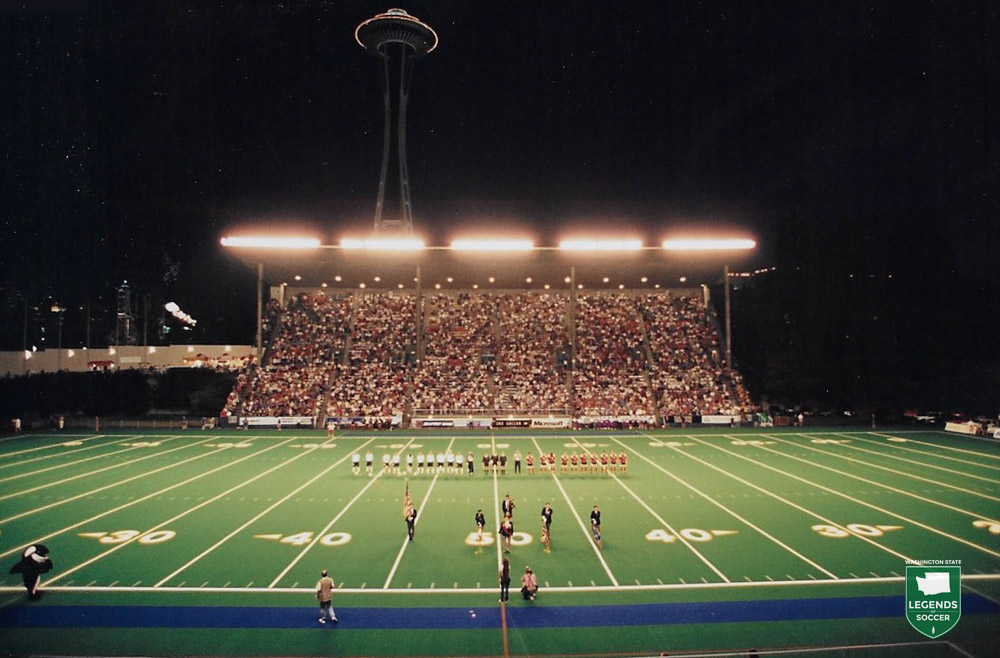 A capacity crowd greets the Sounders and Vancouver for the final 1994 regular season game at Memorial Stadium. 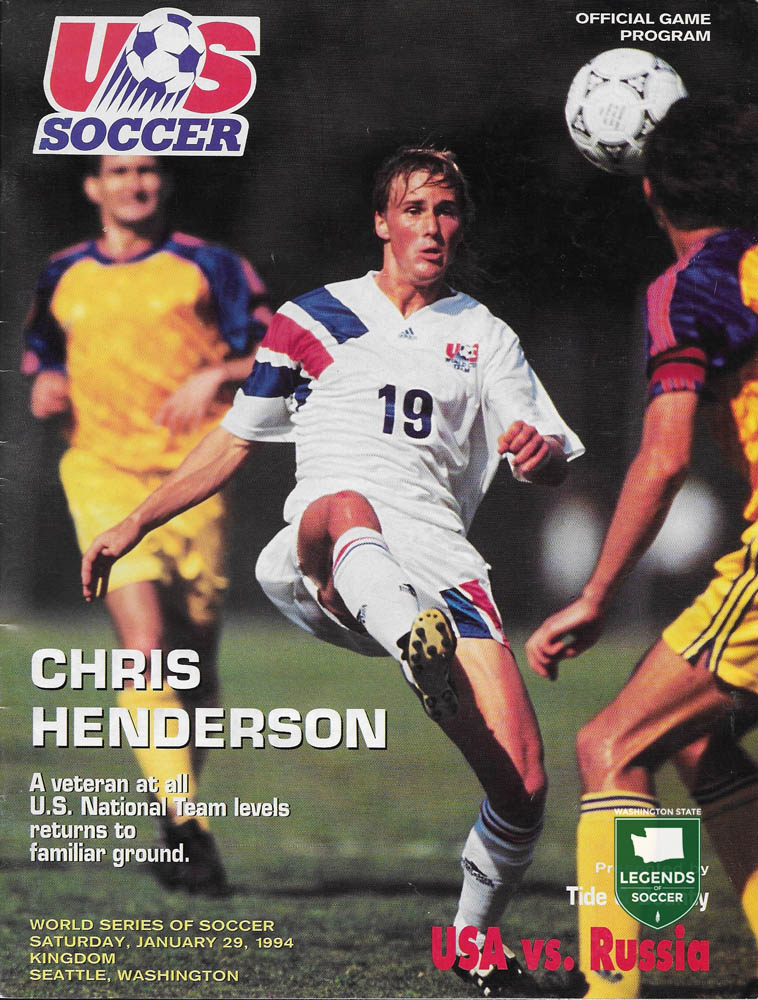 Everett's Chris Henderson featured on the cover of the USA-Russia match program. 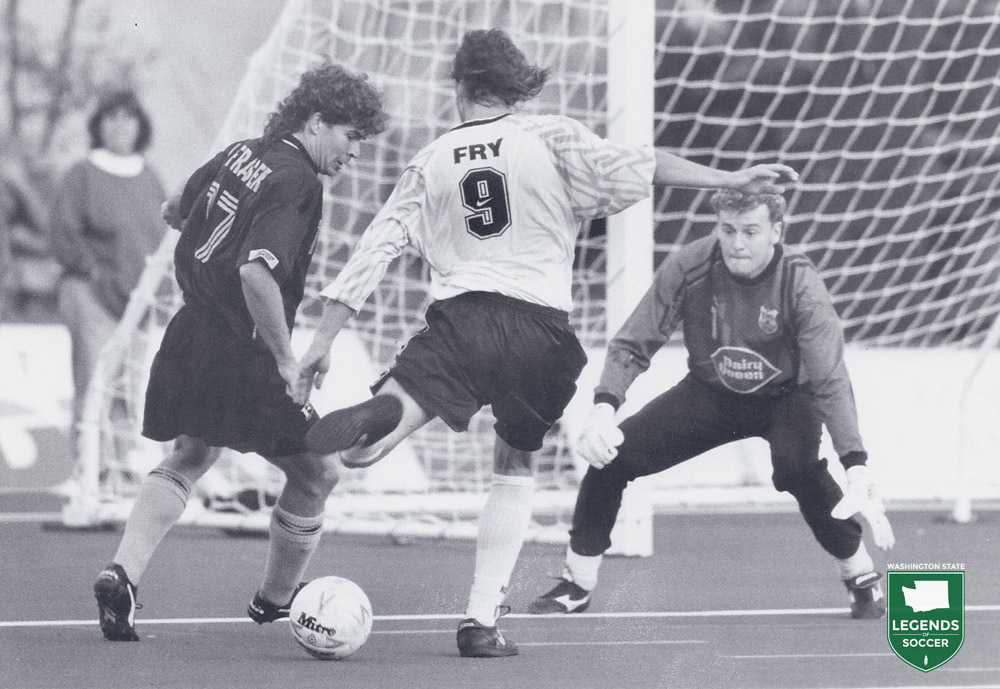 Chance Fry is loaded for goals. The Bellevue native scored 11 to lead the Sounders in 1994. 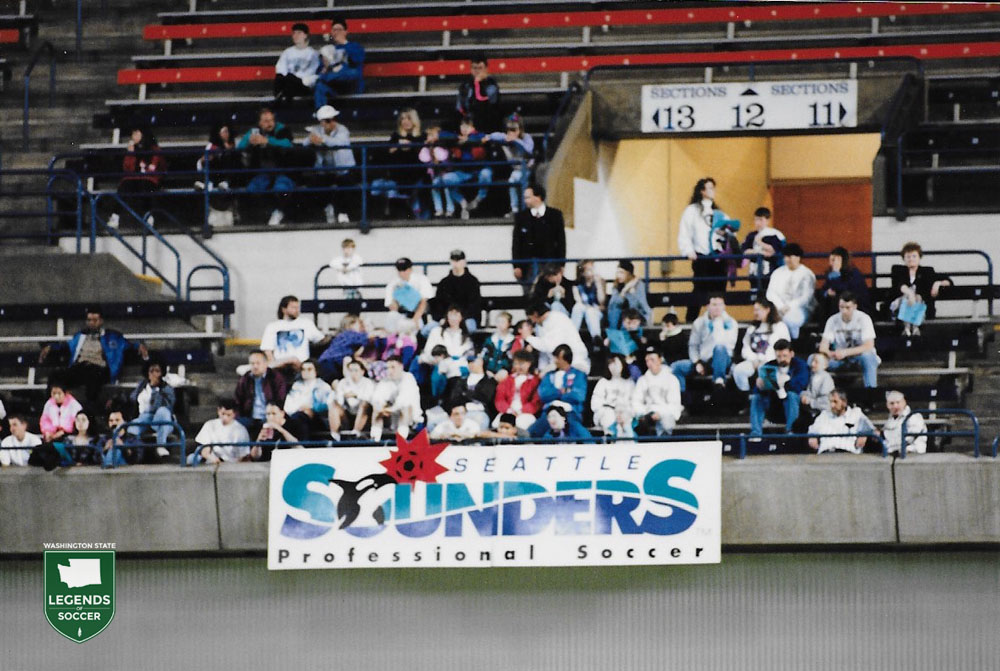 Born-again Sounders made their home debut at the Tacoma Dome. 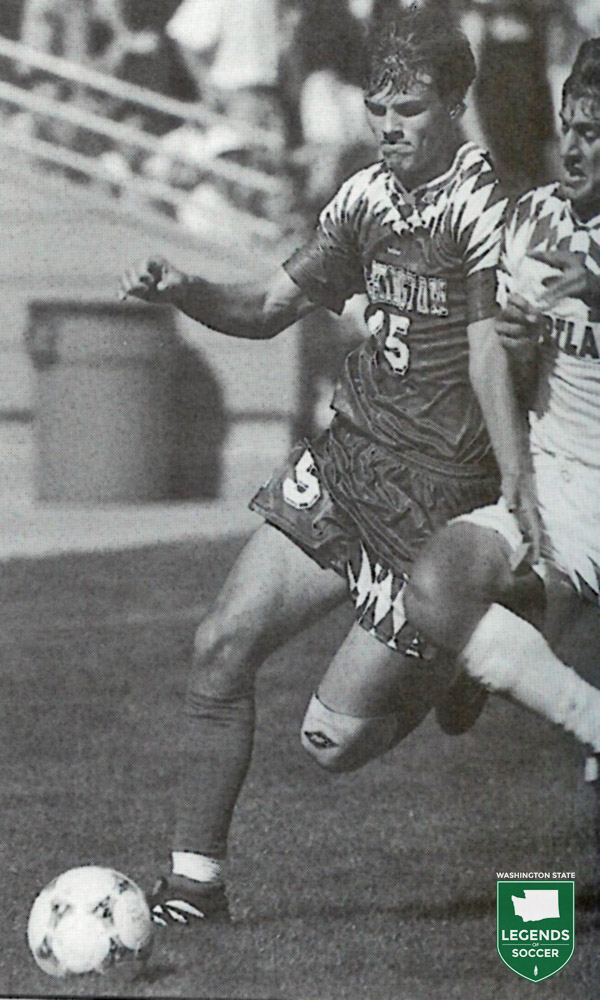 Washington's Craig Waibel challenges for the ball versus Portland. 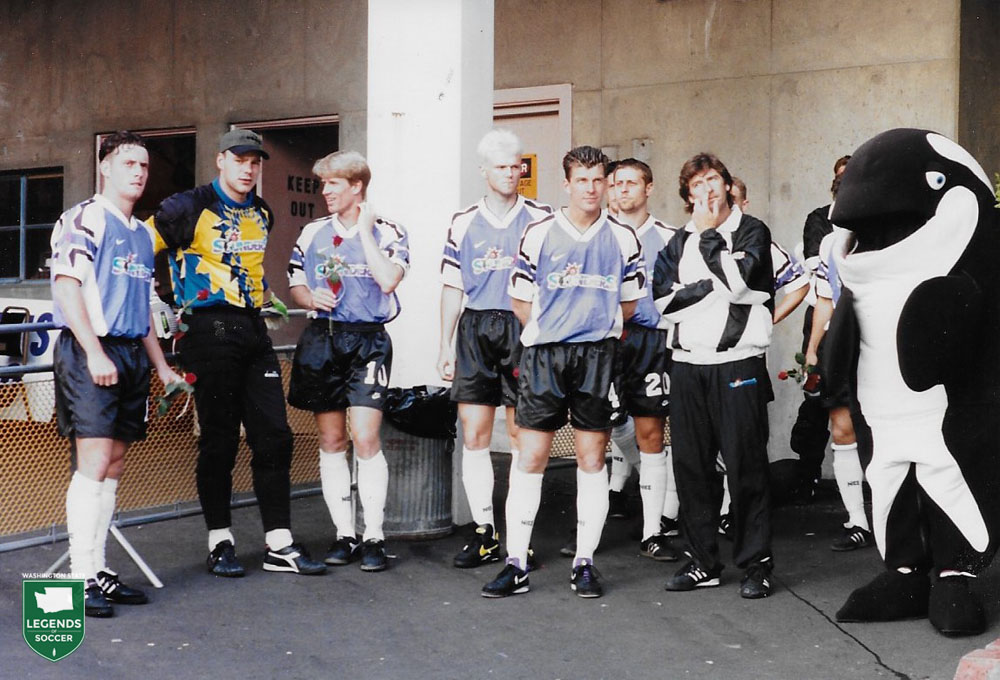 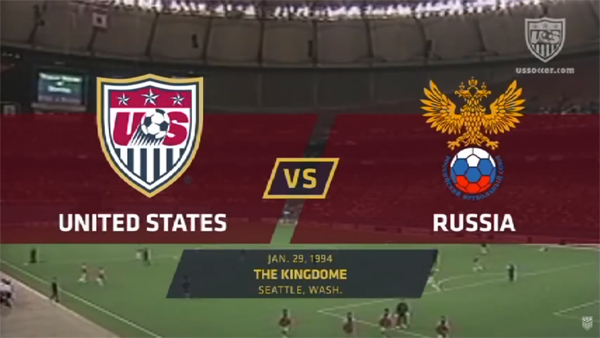 VIDEO: USMNT vs Russia in Kingdome 1994 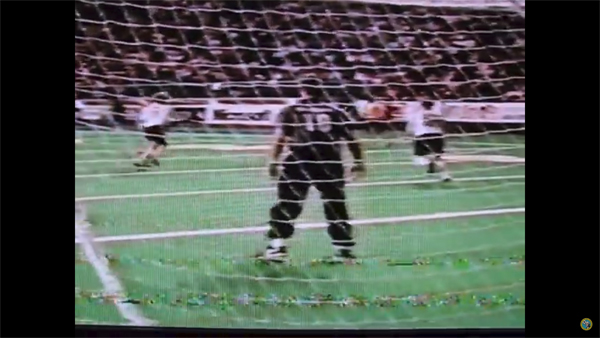 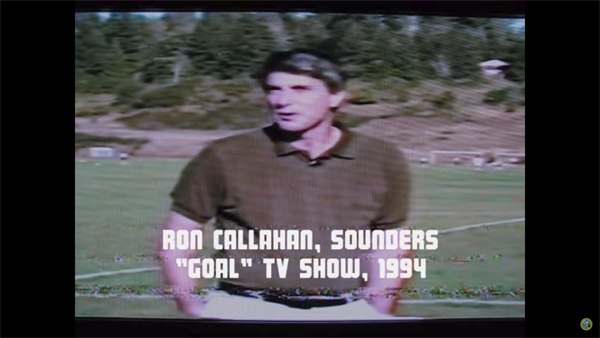 On this Day in History
At the Washington State Youth Soccer Annual General Meeting in June, girls soccer becomes part of the organization, with state tournament play to commence in 1973.
More from 1972 ›
Kei Kinoshita comes on as Sounders first-half substitute vs. Colorado, becoming first Japanese player to play professionally for a U.S. team. Kinoshita, 25, had played for Vissel Kobe of the J League.
More from 1997 ›
Brad Evans and Clint Dempsey score as Seattle wins the second leg of the Western Conference Championship, 2-1, but falls on away goals to the LA Galaxy in front of a franchise postseason record crowd of 46,758. Juninho scores the decisive goal for the away side. Sounders FC went up 1-0 in the 26th minute through Evans. Six minutes later, Dempsey, scores his 17th across all competitions. The Galaxy now hosts New England in MLS Cup.
More from 2014 ›
Morgan McCoy’s goal in the 3rd minute of overtime lifts Washington into the second round of the NCAA tournament with a 2-1 home win over Stanford. Jason Boyce had staked the Huskies to a 1-0 lead.
More from 1997 ›
© Washington State Legends 2020.