As the Korean War rages on, passage of the 22nd Amendment limits Presidents to two terms and the Rosenbergs are sentenced to death for treason. Washington launches its state ferry system and Seattle’s KING broadcasts the first live television news program in the Pacific Northwest.

While the Washington top tier’s geographical footprint would shrink, the state senior league would add two sponsored clubs’ whose names would grow synonymous with championship contenders for many years to come.

Throughout the Twenties and Thirties the Vikings moniker was activated and associated with squads primarily of Scandinavian heritage. The pirates of the Norse are brought back once more, following a 13-year hiatus, for the 1950-51 season. It’s not truly a new team, as the Vikings are a rebrand of Acme Tyee, the defending champions. Different name, same outcome the Vikings claim a total of five prizes, including the league, knockout cup and finally the Northwest champions with a resounding 7-0 rout of Oregon’s Clan McCleay.

The other new club is just growing into its skin. The Buchan Baking Co. sponsors the youngest entry in the top division, a cast created predominantly from the Fremont Boys Club. Eddie Craggs brings his Bakers into the senior circuit. They debut versus eventual league finalist Seattle SC and only fall, 1-0. They would take their share of lumps but also stayed out of the league cellar by winning a few matches.

By the second half of the campaign all six teams are from Seattle, a city celebrating its centennial year. Black Diamond, once a force in the region, leaves the league after a humbling first half when the Miners were humiliated by the Vikings, 11-nil, and only managed to field a respectable side by picking-up players from the disbanded E&E Meats.

The Vikings found themselves on the other end of such lopsided loss, albeit in a friendly, a few months later. Stockholm’s AIK, just the second touring professional club to visit Seattle, delivers a 12-2 beating. Still, it’s an occasion to bring together the game’s extended family, with an outstanding turnout of 5,000 at West Seattle Stadium.

There's some new kids in town, the Bakers, and Vikings become the team to beat. Meanwhile, Black Diamond's days on pitch are done.

Sponsors Step Up to Secure Swedes

Five major individual sponsors step up to provide a $2,000 guarantee for Sweden’s AIK to visit Seattle. AIK’s tour will begin on the East Coast, with matches in New York and Massachusetts before moving on to Detroit and then Vancouver and Seattle. Einar Carlson, Axel Thornberg, Ivan Anderson, Austin Gunderson and Barney Kempton are the sponsors for the June 17 friendly versus the state champion Vikings at West Seattle Stadium. AIK was recently relegated from Sweden’s first division, the Allsvenskan.

The Vikings lift their fourth trophy of the season by winning the 16-team five-a side tournament at White Center. Five of the entries are form Vancouver, including Sunset Memorial, the British Columbia junior champions who fall to Vikes, 3-1 in the final. Erling Hansen, Einar Eliasson and Emmett Brennan score in the 15-minute match.

A crowd of 5,000 packs West Seattle Stadium for an international friendly featuring Sweden’s AIK. The Stockholm side, which had already beaten the ASL All-Stars in New York, 4-0, throttle the state champion Vikings, 12-2. G. Nillson opens the scoring after three minutes and B. Blackwell nets four times for the Swedes.

In their second cup final meeting in three weeks, the Vikings avenge a loss to Sunny Jim in the league knockout cup. A goal in each half by Thor Ronning carries Norselander to a 3-1 win at White Center.

Sunny Jim, after finishing the second half of league play with two defeats, regroups and rises to blank the Vikings, 3-0, in the George Washington Cup final at White Center. Sunny Jim, coached by Gordon Roberts, gets goals from Ben Weischer, Ivor Merryfield and Walter Clark.

Vikings get two goals and an assist from Norwegian Per Petersen to overpower Seattle SC, 5-2, for the league championship and McMillan Cup at White Center Stadium.

Seattle SC Clinches on Own Goal

A late own goal gifts Seattle SC the decisive goal in the second-half title race with Sunny Jim. SSC (8-0-2) earns the title with a 2-1 win at Lower Woodland. The decline for Sunny Jim began a week earlier when league secretary Vic Weston ruled they had used an ineligible player in a 9-1 victory over Buchan. The Bakers were awarded a forfeit, the Jims’ first loss of the stage.

Teen Steps Up for Vikes

In the absence of regular keeper Perry Stangvik, 15-year-old Bob Moser, usually a midfielder, steps between the sticks for the Vikings’ 5-1 win over Black Diamond in the semifinals of the league knockout cup.

“
AIK carried the attack all the way, dribbling, butting and feinting the ball to coast to the lopsided win. The Swedes let the ball do the work while the Seattle eleven chased it under a warm afternoon sun.
— Seattle Times match report for Vikings v AIK 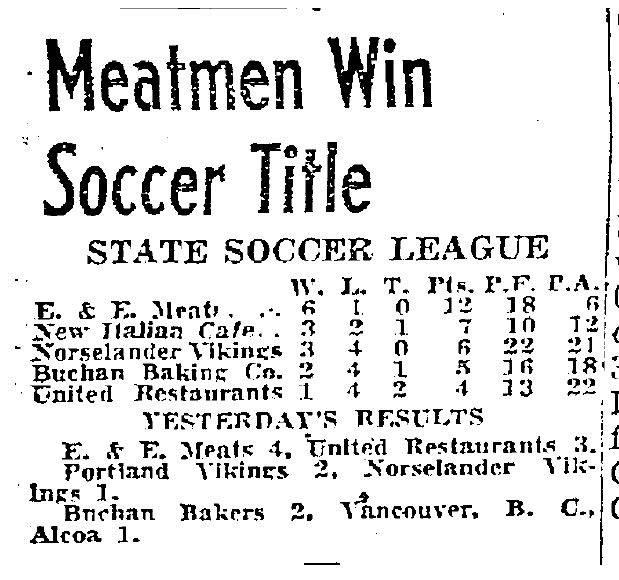 On this Day in History
Washington ends its first women's season on a seven-game unbeaten run with a 4-0 win over Simon Fraser at Everett High School. Kathleen Juergens bags a brace, bringing team-leading total to seven. The Huskies (10-6-2) go 6-0-1 down the stretch, with the sole blemish a 0-0 draw at eventual NAIA champion Pacific Lutheran on Oct. 30. Four of the losses are to teams ranked in the top 12.
More from 1991 ›
Lamar Neagle scores his first-career MLS goal and Patrick Ianni adds another, giving the Sounders a 2-1 victory over a 10-man Real Salt Lake at Rio Tinto Stadium. RSL sees its MLS record 29-game home-unbeaten streak snapped while Seattle proceeds to go unbeaten in 11 in all competitions.
More from 2011 ›
Trouncing cellar-dweller United Natives, 7-2, Norselander Vikings (11-1-1) finishes on top of the first-half table to win the state leagues' Roosevelt Trophy. Seattle Hungarians (11-3-0) finish just one point behind. Gudolph Kjairhem gets a hat trick for the Vikings.
More from 1959 ›
Washington ventures east of the Rockies for the first time, traveling to Dallas to play Southern Methodist. The 2-1 loss is part of the Huskies’ three-game, four-day swing through Texas, including a 4-3 win vs. North Texas and a scoreless draw at Texas Christian.
More from 1990 ›
© Washington State Legends 2023.