Muhammad Ali is stripped of his heavyweight boxing crown after refusing to be inducted into the U.S. Army, the first NFL-AFL Championship Game (later named the Super Bowl) is won by the Green Bay Packers over Kansas City, 35-10, and Rolling Stone magazine publishes its first issue. Locally, Interstate 5 is completed from Tacoma to Everett, Ivan the Gorilla takes up residency at Lakewood’s B&I Store, Boeing’s 737 makes its maiden flight from Boeing Field and the art deco-styled ferry Kalakala makes its final run across Puget Sound.

Investors in American professional soccer, emboldened by the high viewership ratings for the 1966 World Cup final, creates 22 teams and two warring leagues in 1967. Vancouver secures a United Soccer Association franchise, the Royal Canadians, and there is rumored interest in expanding soon to Seattle.

With that as the backdrop, local promoters arrange to bring Chelsea to Memorial Stadium once the English season is completed, on May 28. The Blues finish ninth in the first division and advance to the FA Cup final, where they fall, 2-1, to Tottenham on May 20. They promptly take flight to the West Coast of North America where they also make stops in Los Angeles, Vancouver and Victoria. It’s all part of a 24-day tour through the U.S., Canada and Bermuda.

Rarely was admission charged and attendance taken at soccer matches around Puget Sound to that point, so the Chelsea game would serve as the first barometer for soccer as a business. Tickets were priced $2 in advance and $1 for students and children.

Elsewhere, some of Chelsea’s touring dates featured another foreign invader. Seattle settled on a local contingent. The Hungarians might have been more rehearsed and cohesive as a team, but instead Alex Lennox was appointed manager and it became a select squad. The Hungarians were well represented, and all of the Northwest All-Stars were foreign-born. Baldwin, the future Sounders midfielder, scored twice in Chelsea’s 5-0 win.

More importantly, the match attracted 6,400 spectators – a respectable turnout and comparable to most NPSL and USA games. It was sufficient to spur further discussion of Seattle acquiring a team for a few months, and for the next five years European clubs would come calling for springtime friendlies.

However, the notion of getting a professional franchise waned when the two leagues, both facing financial strains, agreed to merge before 1968. Instead of expansion there was contraction, down to 17 total teams.

Effectively, the Chelsea match was the last significant sporting event played on the old, rocky (and in winter, muddy) Memorial sod. In August, the Seattle School Board voted to install Astroturf, making it the world’s first football and soccer facility to do so (although the college stadium in Bloomington, Indiana, was the first to stage a competitive event).

As the Hungarians make their case for readmission the Pacific Coast League, Mike Kuczi fires six goals past Vancouver’s Moslem Thistle in an exhibition win, 9-2, at West Seattle Stadium. Les Mueller bags two goals and Zoltan Mako the other against the Mainland League club.

The Hungarians dethrone four-time Five-a-Side tournament champion Vancouver O’Keefe’s, 1-0, on Les Mueller’s strike with 30 seconds to go in the final at West Seattle. Thirty-two teams from Washington, Oregon and B.C. started the day, with 19 being Canadian. A Bellevue teams featuring four juniors shocks the senior Vikings, 4-0, in the first round but bows out to the Hungarians at the quarterfinal stage.

Edgemont Theatre in Edmonds screens “Goal,” official film of 1966 FIFA World Cup. State league coach Alex Lennox and Huskies coach Mike Ryan serve as hosts. The Seattle Times reports: “One does not have to be a soccer fan to appreciate the color, the crowds, the action caught by the cameras in ‘Goal!’

Hungarians Opt Out of PCL Return

Balint Ducz decides to withdraw the Hungarians' application to return to the Pacific Coast League due to costs of renting West Seattle Stadium. The PCL had concerns about a suitable playing facility since the Magyars first joined the league from 1962-64.

Hat tricks by Mike Kuczi and Les Muller fuel Seattle Hungarians’ 9-0 rout of Portland All-Stars at West Seattle Stadium for their third consecutive Northwest championship. Portland’s team, its nucleus from the tops side Amsterdam, held on through the first half, trailing only 2-nil after Kuczi and Tommy Major (penalty) score in the first 11 minutes. However, the onslaught is unrelenting in the second period, with Kuczi, Mueller and Alex Bogdan (twice) pushing it to 7-0. Following a Con Tagios goal, Mueller cracks a shot off the crossbar and in. Oregon has not won the title since 1955.

Another impressive Hungarians exhibition win versus Canadian opposition concludes the 1966-67 season at West Seattle Stadium. The Magyars defeat the Pacific Coast League’s New Westminster Royals, 3-2, on goals from Tommy Major, Mike Kuczi and John Phelps. The Hungarians, who have requested re-entry to the PCL in the fall, are also making a case for representing the local area vs. Chelsea, rather than an all-star team.

Dale Lenz scores the first goal, his 13th of the year, and Seattle University goes on to beat Washington, 3-0, in the first competitive intracity meeting between intercollegiate teams at Lower Woodland. Mike Carney doubles the lead and Tom Yagle completes the scoring. The two teams met Oct. 6 in a non-counting game after the Chieftains had just four practice sessions. The Huskies won that, 3-0, at Lower Woodland.

Heavy rain and poor drainage leaves Interbay Field unplayable for a state league doubleheader. Over two inches of precipitation has been measured in December's first three days, and more is on the way. Another series of storms two weeks later make both White Center and Lower Woodland unplayable and postpone state league matches until the New Year.

Considered a bellwether for whether Seattle could support a team in one of the two new professional league, FA Cup runner-up Chelsea visits Memorial Stadium. The young Blues (oldest starters age 26), featuring $225,000 signing Tommy Baldwin, beat the Northwest All-Stars, 5-0, before a crowd of 6,400. The Blues get first-half goals from John Broyles, Baldwin and Joe Kirkup. Baldwin and Barry Lloyd add more in the second half. The visitors are unimpressed by the playing surface, which is less grass and mostly dirt with gravel mixed in.

The Tacoma Wanderers depart for a three-week tour of England, where they train under English FA coaches, play several schoolboy teams and meet the legendary Sir Stanley Matthews, now manager of Port Vale. Frank Hall's U16 team of 14 players raised nearly $7,000 through raffles and donations. The Wanderers, proclaimed the first American youth team to play in England, goes 0-2-2 versus teams from Staffordshire, Stockport, Oxford and Woking.

Seattle University earns its first varsity intercollegiate victory, 1-0, over Shoreline Community College on Joe Zavaglia’s goal at Lower Woodland. The Chieftains, who formed their program hastily in September, proceed to win the next five games.

Monsanto begins installation of Astroturf at Memorial Stadium, making it the first football and soccer facility to do so. The Seattle School Board voted to purchase the rug as a cost of $174,468. Parking concession funds will pay for the turf. Memorial also installs ‘slingshot-type’ goalposts. The first competitive event on the carpet is the Sept. 22 Metro Jamboree football games. Harvey Lanman, Metro League athletic director, had been seeking to upgrade the surface for four years. It is the first installation of Astroturf outdoors Houston’s Astrodome was the first to use it.

The Hungarians (7-0-1) clinch the state league's second-half title and avert a championship playoff by blanking the Continentals, 2-0. The Magyars eventually finish 9-0-1. Mike Kuczi scores goals in each half and Walter Schmetzer’s penalty kick hits both posts before bouncing out for the Continentals. Elsewhere, Otto Myrold scores six goals in the Vikings’ 12-0 rout of United Hungarians.

The fifth year of the Canadian Exchange features still more teams crossing the border. In all, 127 Seattle area teams participate, with the Americans improving their record to 27-52-19.

Despite dominating the number of chances, the Seattle Hungarians fall to the San Francisco Greek Americans, 1-0, on a goal in the second minute, in the West semifinals of the National Challenge Cup before 2,500 at Balboa Park. Kirk Apostolidis beats Willi Lindner, and the Greeks nearly make it 2-nil moments later. Seattle then asserts control. The Magyars pepper the goal with shots, get a penalty appeal denied and Alex Bogdan's late try is cleared off the line.

Renton’s city council votes to appropriate $92,000 to build new stands, locker rooms and other improvements to Liberty Park, long the favorite site for all athletics, including soccer, in that city.

Steve Furjesi of the Hungarians signs as a placekicker with the Denver Broncos of the American Football League. Lou Saban, Broncos coach, is impressed that during tryouts Furjesi could kick field goals with either foot.

State association secretary Ed Craggs notes that the 18 first and second division teams feature players from 39 different countries, many of them having played professionally or semipro before coming to the state league.

“
I would like to register a complaint about Channel 7’s decision not to carry telecasts of the National Professional Soccer League on Sunday afternoons…Are not station officials aware that soccer is the world’s most popular athletic game?
— Letter to Seattle Times editor, after KIRO delays games up to six days and pre-empts others
“
It’s like a dream, to get the kids out of the mud.
— Harvey Lanman, Metro League athletic director, on the installation of Astroturf at Memorial Stadium
“
The players do not want to be known as the Hungarians or the Germans or what-ever, they want to be known as Americans playing for Seattle.
— Zoltan Mako, Hungarians star midfielder, after representing Northwest All-Stars versus Chelsea
“
Seattle’s next major-league venture in professional sports will not necessarily be in the field of football or baseball. It is more likely to be soccer.
— Vince O’Keefe, Seattle Times
“
It’s going to be even better than I imagined it would be. It’s thicker and nicer. Just think, no more mud or gravel or sand or rocks. Rain or shine, makes no difference.
— Harvey Lanman, Metro League athletic director, on Memorial Stadium's newly-installed Astroturf
Collegiate Men's Records 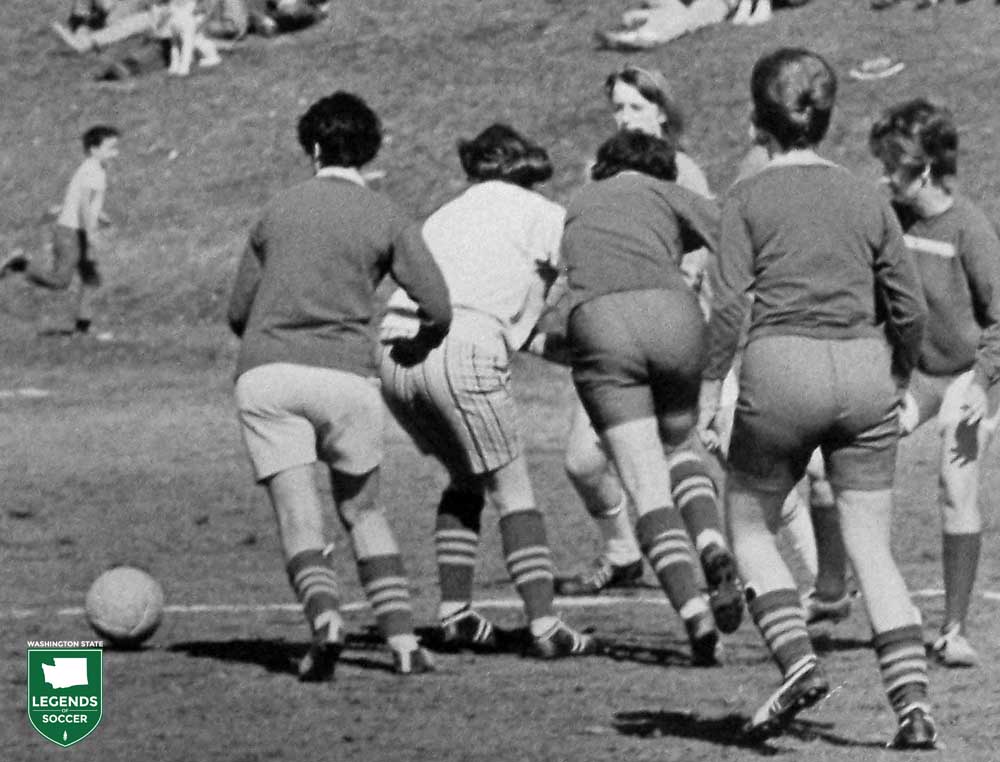 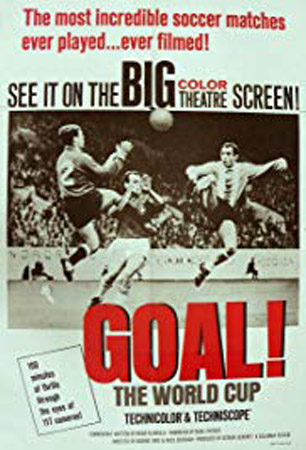 A year after the World Cup spurred creation of two U.S. professional leagues, the official film is screened in Edmonds. 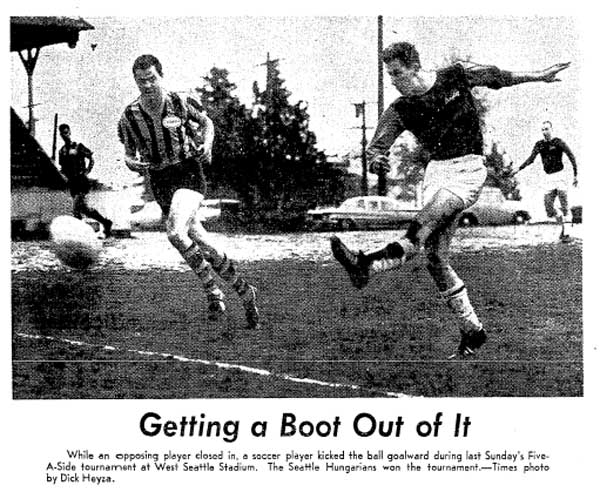 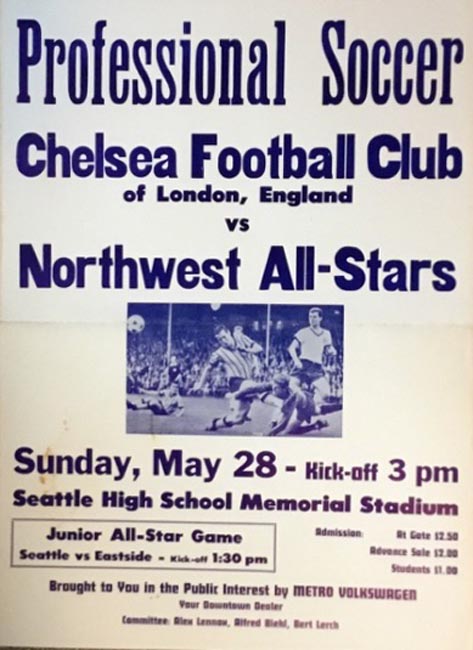 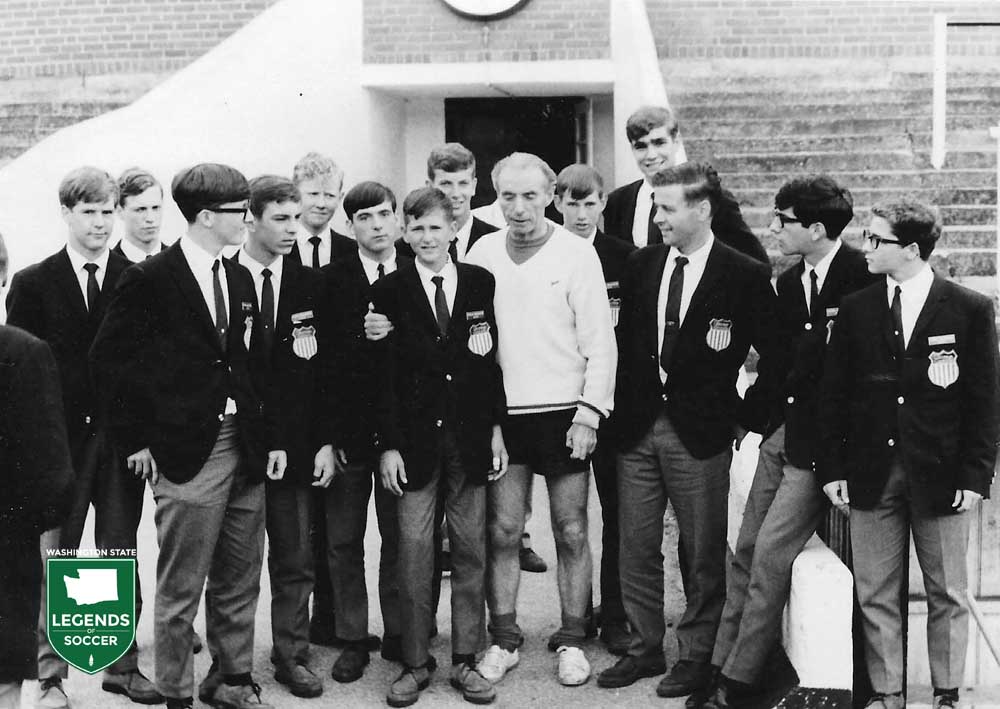 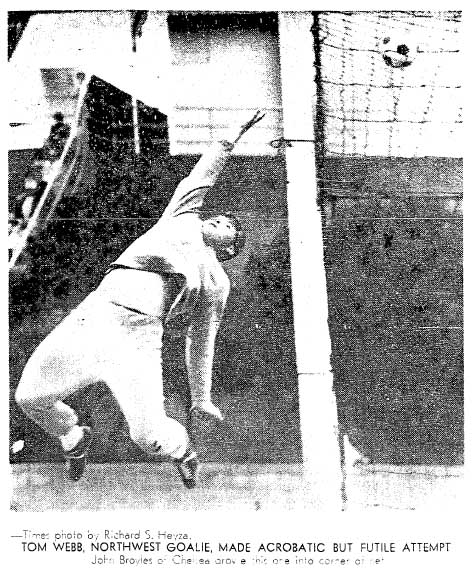 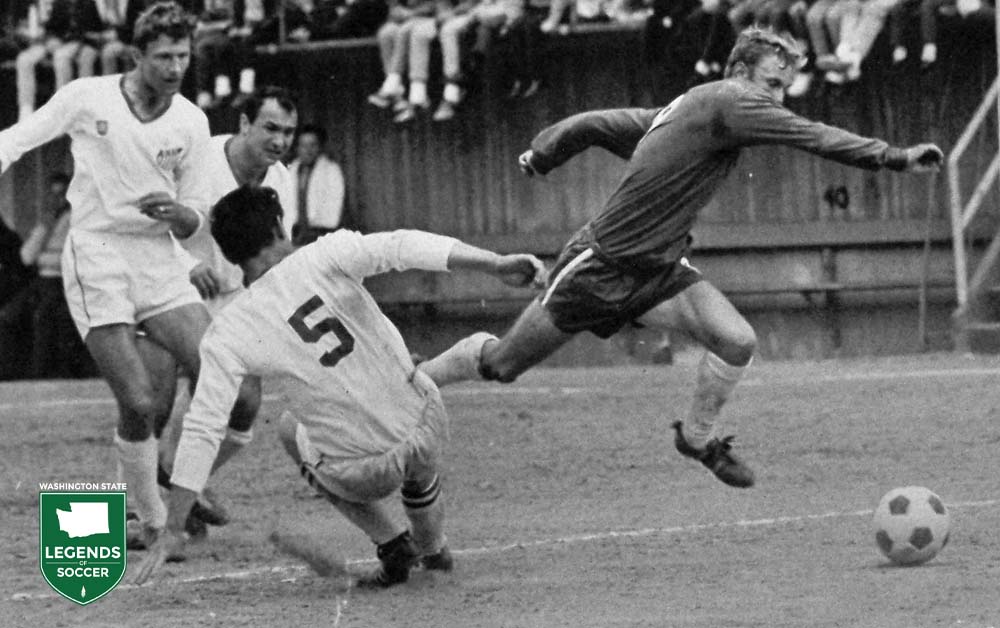 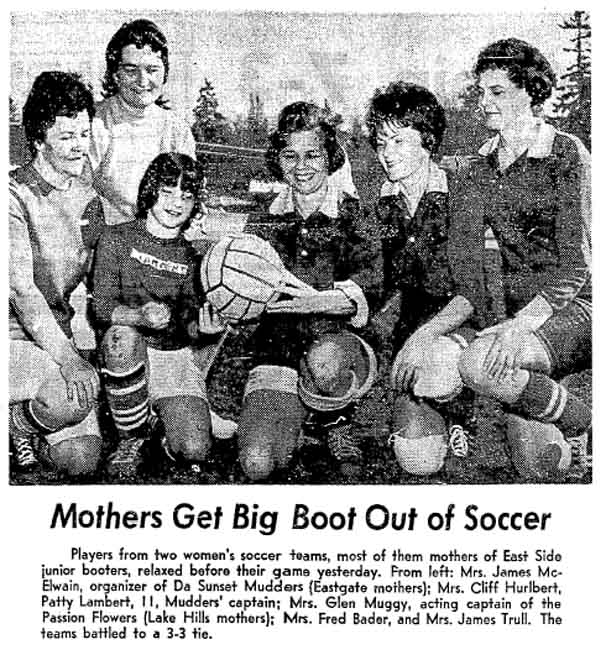 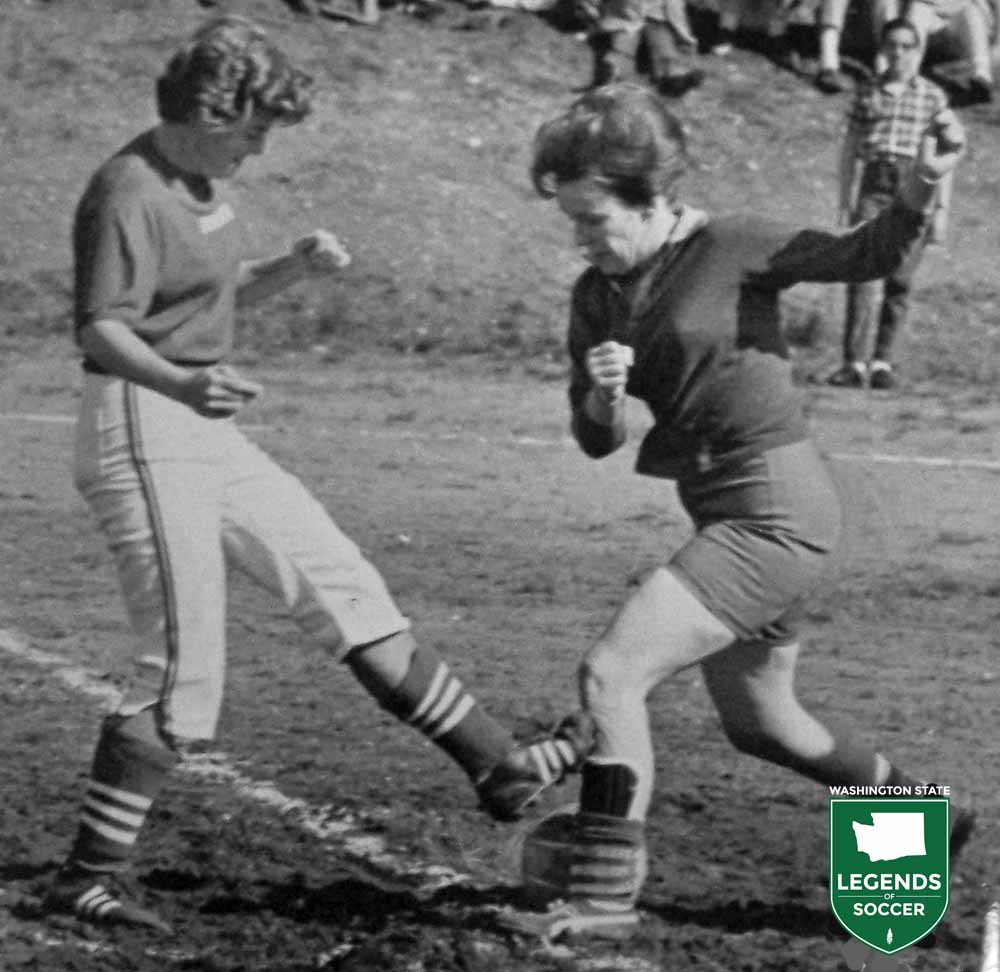 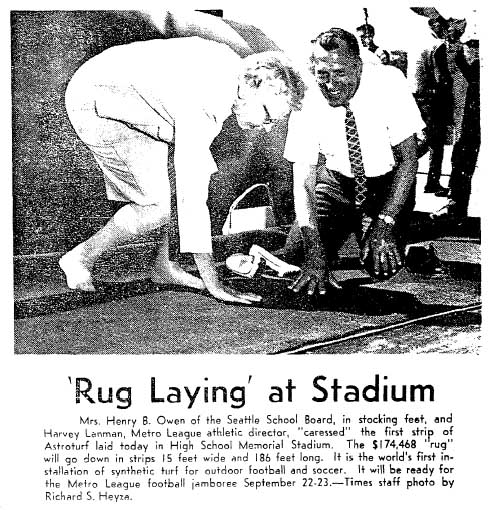 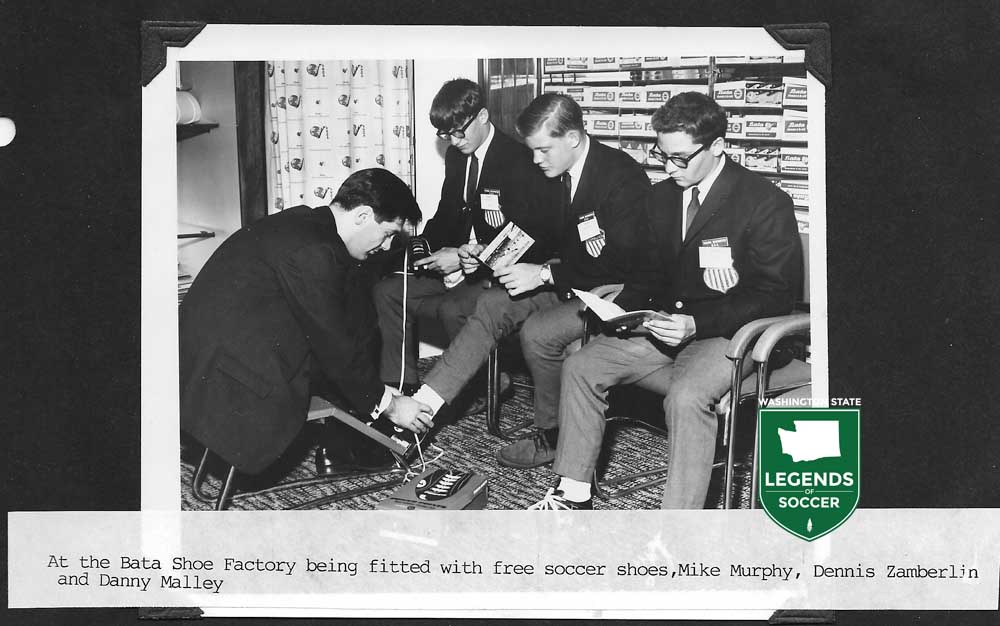 While in England, Tacoma Wanderers players got fitted for some new boots. 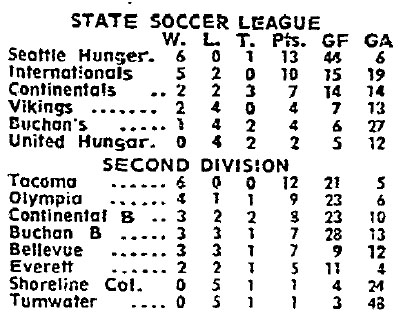 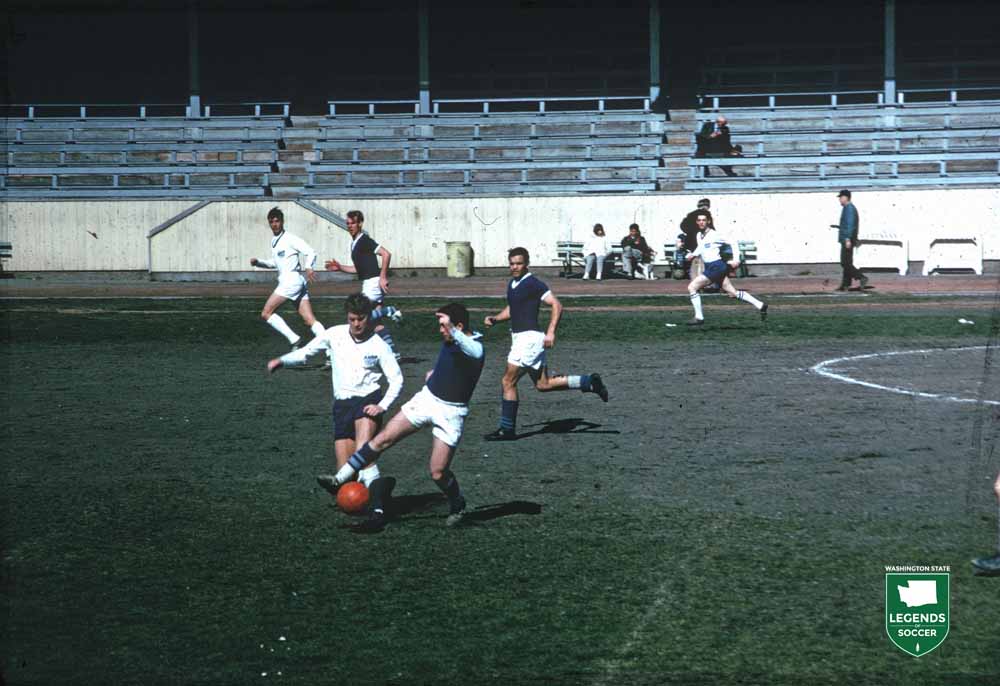 On this Day in History
Ending a month-long scoring drought, Blake Bodily scores and Ethan Bartlow notches his first collegiate tally as No. 25 Washington beats No. 22 Oregon State, 2-0, in the regular-season finale for both teams at Husky Soccer Stadium. A four-match win string lifts UW to 12-7-0, and a day later Washington gets its third straight NCAA bid.
More from 2018 ›
Seattle Pacific begins an ambitious road schedule with a 6-1 win at the University New Orleans where Peter Hattrup scores four goals. SPU crisscrosses much of the continent twice during the season, racking up some 14,000 air miles while playing in seven states and provinces, including two trips to Florida. A midseason trip takes the Falcons to Wheaton (Ill.) and the season ends back in Tampa.
More from 1983 ›
Denny Buck and Todd Schilperoort, both assistant coaches at Washington, depart for Saudi Arabia. Buck, 27, and Schilperoort, 24, have been hired by the U.S. Sports Academy to coach the Royal Saudi Air Force team and develop other programs.
More from 1981 ›
Nancy Mikacenic and Jenny Skinner score in the final five minutes to push Lakeside past Highline, 2-0, in the state girls' 3A final at Federal Way. The Lions pepper the Pirates with 22 shots through 75 minutes, but then Skinner cuts the ball back to Mikacenic to score from 18 yards. One minute later, Lisa Jensen finds Skinner for a 2-nil advantage. It's Lakeside's third title in four years. Their only loss in the last 69 games was the 1997 final.
More from 1998 ›
© Washington State Legends 2023.