1958 ľ Around the World and Close to Home

Perhaps John Zavaglia saw something of himself or certainly his own immigrant family when he first laid eyes on his new assignment. The young men arriving that evening at Seattleĺs Beacon Hill Playfield had very little in common with one another, except their age and their passion for playing football. Only here, in the nation where they came to study, it was known as soccer.

A few days earlier, Zavaglia had been a captive audience to his dentist. While having a crown installed on a tooth, he listened as his dentist shared the story of the Husky Soccer Club. It was a collection of international students attending the University of Washington, and they were playing in the State League on Sundays. But according to Dr. Rogers, they werenĺt maximizing their talents they werenĺt playing together.

Zavaglia, the fortysomething son of an Italian immigrant, was intrigued. Born in Black Diamond, the early-century hotbed of local soccer, he had taken to the game, as well as baseball, at a young age. He played for Boeingĺs State League entry and had successfully coached the boysĺ CYO team at St. George School, a couple miles away, also on Beacon Hill.

Itĺs doubtful that the Husky SC had designs on vying for trophies. After all, they were playing in the shadow of established clubs such as the Vikings and Buchan Bakers, plus the emerging Hungarians.

ôThey were just a good, fun-loving group,ö recalled John Zavaglia, the coachĺs son, decades later. ôThey were from all over the world, foreign exchange students. The problem was that they were all individualists. They each had their own style they didnĺt play well or gel as a team.ö As their coach, John Zavaglia hoped to change that.

College soccer in the late Fifties was about to experience a growth spurt. Varsity play had expanded west of St. Louis to California and then Colorado. As the NCAA announced plans to initiate championship play in 1959, Husky SC was effectively the seedling that would grow to a towering evergreen in following decades. It was partially funded by the Visiting International Studentsĺ Association, which represented approximately 500 students on campus. Husky SC had played under the VISA flag beginning in 1957-58 and would continue on through to the establishment of a UW varsity program.

Much like the first few editions of the UW varsity to come, Husky SC was comprised of students hailing primarily from Europe and Africa. John Nketiah and Emmanuel Kwapong, both of Ghana, possessed dazzling attacking abilities. Alex Fry, the goalkeeper, was the lone local. One player who preferred to avoid attention would go on to contribute greatly to both the Huskiesĺ heritage and the greater Seattle community.

Dick Aguirre, who grew up around the game in southern California, was becoming a key contributor to Jim Owensĺs UW football team. Aguirre started at tight end on Washingtonĺs Rose Bowl-winning teams in 1960 and ĺ61 and was a fullback for Husky SC.

ôDick was chiseled, in perfect shape and said he wanted to stay in shape during the offseason,ö explained Joe Zavaglia, who often tagged along with his dad to practices. Aguirre wanted his participation to remain under the radar to coach Owens, however. ôIt was all hush-hush because he was doing this on his own, on the side.ö

Aguirre would later introduce himself as Ricardo and a Chicano. In 1972 he joined other activists in occupying the abandoned Beacon Hill School, a few blocks south of that playfield, demanding that the building be converted into a community center that served Latinos. City officials eventually gave in, and El Centro de la Raza ľ The Center for the People of All Races ľ was created. Aguirre became a founding member of the nonprofit and would serve there for more than 40 years, becoming well-known to youth for his regular visits to neighboring schools.

John Zavaglia and Ricardo (Dick) Aguirre: sons of immigrants who endeavored to make other immigrants to Washington feel at home.

Guided by the son of an Italian miner, International students gather to form the University of Washington's first soccer team, the forerunner of the varsity program.

The Associated Press reports soccer's popularity as a participant sport is surging in America. More than 200 colleges are now fielding teams. The National Challenge Cup boasted a record 148 entries with another 179 in the Amateur Cup. The U.S. Seventh Army also reports 3,000 soldiers are competing on 180 teams.

An early second-half header from Larry Peterson is the difference as Norselander Vikings reclaim first place from the Hungarians, 1-0, at Lower Woodland Park. The Vikings, who trailed the Magyars by a point going into the game, proceed to clinch the first half trophy the following week.

A last-minute goal from John Phelps delivers the 15th annual Five-a-Side trophy to Scotty's Fish & Chips, 3-2 over Taurus of Vancouver at Catholic Memorial. It's the 10th goal of the day for Phelps, who scored his team's second. Scotty's wins all four matches and by a goal differential of 15-6, and the tournament field of 24 is the largest in many years.

George Goers scores a hat trick, but it's his fourth goal that seals the Scotty's Fish & Chips victory over Norselander Vikings in the Puget Sound Power & Light Cup final, 4-3, at Lower Woodland. Goers scores three times for a 3-nil lead. However, it's wiped out by two from Larry Petersen and a penalty rebound conversion from Bob Simonsen. In the closing minutes of regulation, Goers hits a penalty kick to secure the third trophy of the season for Scotty's.

The NCAA Executive Committee approves sponsorship of a soccer championship tournament during meetings in Philadelphia. A survey had shown 104 member institutions are interested in competing. In 1959, the first tournament is conducted. The University of Washington begins a varsity program four years later.

Art Smith's three goals proves ample firepower for Scotty's Fish & Chips to down Husky SC, 6-1, to win the state league second half at Lower Woodland. Scotty's finishes 11-1-0, with a six-point cushion over Germania, whom they defeated, 3-1, a week earlier behind a Smith brace. The Puget Sound Navigation trophy is the first prize for Scotty's sponsor Bob Wyllie although manager Bill Chenoweth has won several before. Scotty's, which also won the first half, also takes the overall season crown.

Seattle Hungarians thrill a big crowd at Lower Woodland with both style and scoring in winning the Pacific Coast Coal Cup, 3-1, over Norselander Vikings. The undefeated Hungarians go to the wings to avoid the Viks central defense and score after 15 minutes through Al Mraz. Charlie Boyer doubles it after scoring from a long defensive clearance. Thor Ronning mounts a comebacks for Norselander, but it's blunted when teenager Les Mueller gets the Magyars' third to clinch the knockout trophy, the first of many over the coming decade.

“
The Hungarians have shown real craft, letting the leather do the work and leaving the big kick out of the game.
— Ron Tullis, Seattle P-I reporter 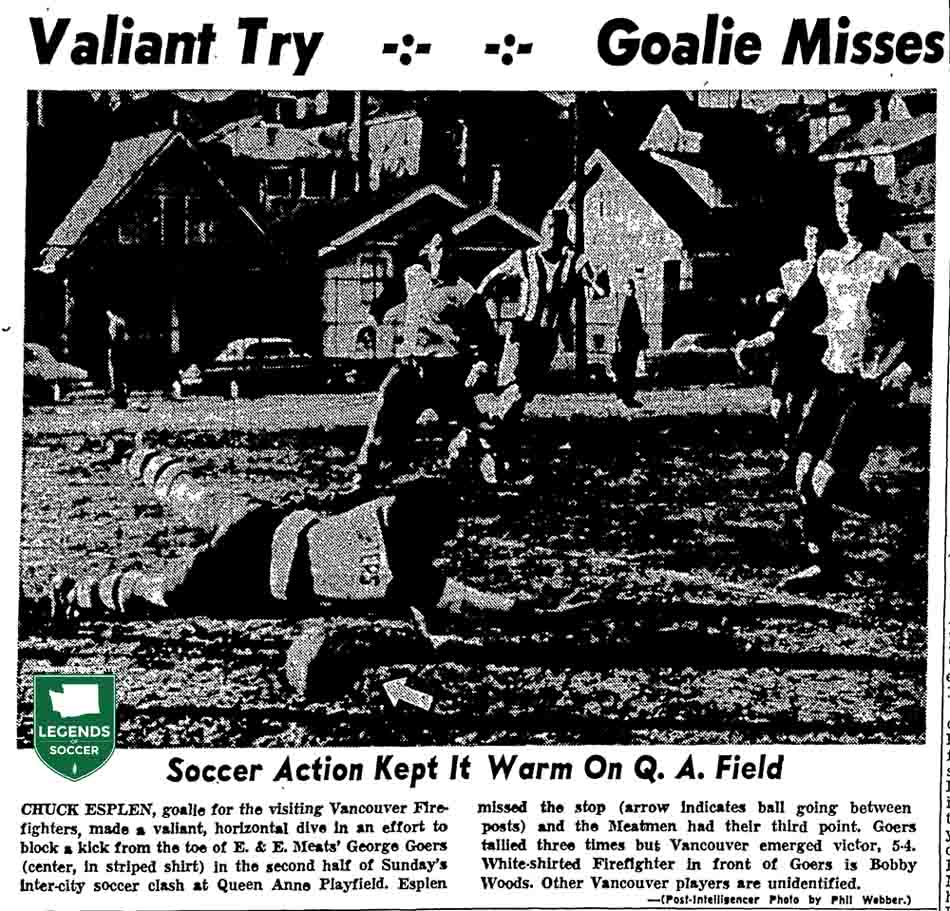 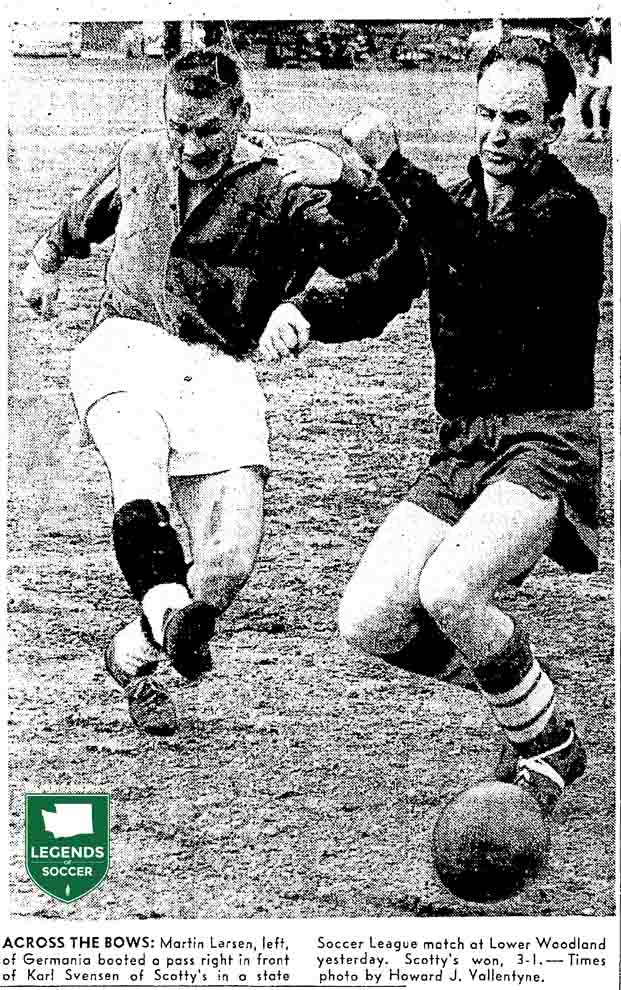 On this Day in History
Mike Pardini's first-half strike is the only goal as the Yakima Reds punch their ticket to the PDL finals. The Reds blank the Colorado Comets, 1-0, at Spokane's Joe Albi Stadium. Pardini, a sophomore at Seattle Pacific, gets clear of a scrum and laces his shot into the net in the 36th minute.
More from 2000 ›
Fredy Montero stretches the net twice in a three-minute span in propelling Seattle Sounders to their record fifth consecutive victory, 2-0, at FC Dallas. Bryan Meredith continues his spotless spell for the injured Michael Gspurning, making five saves to extend his scoreless streak to 225 minutes. Dallas looks in control until the 68th minute, when Montero maneuvers around two defenders and beats Kevin Hartman near post from 15 yards. His second goal comes in the 71st minute from short range. Seattle (7-1-1) is now unbeaten on the road in eight games.
More from 2012 ›
Jason Boyce scores in the second overtime and the 146th minute overall to give Washington a 2-1 win over Santa Clara in the first round of the NCAA Tournament before 1,401 at North Creek Complex in Bothell. Boyce takes a pass from Rees Bettinger and chips the ball over Broncos goalie Joe Cannon. Bettinger ties it at 1-1 in the 66th minute. Washington, making back-to-back tournament appearances for the first time in 23 years, is the No. 1 overall seed in the field.
More from 1996 ›
Runner-up a year earlier, Shorecrest wins the second WIAA girls' state tournament behind a Michelle Akers goal, 1-0 over Cascade at Auburn's Troy Field. In the second half Akers brings down a Kristine Anderson free kick, turns left and roofs it left-footed from 20 yards. Wendy Stubenrauch is called upon to make a handful of saves in the final 10 minutes to secure the Scots' shutout.
More from 1983 ›
© Washington State Legends 2023.