×
A World Cup Every Sunday

After West Germany is brought into NATO, the Soviet Union forms an Eastern Bloc with seven neighboring nations. Domestically, Rosa Parks refuses to sit in the back of a Montgomery bus, and Martin Luther King leads a black boycott of that transit system. In Washington state, test pilot Tex Johnston performs a rollover maneuver of a prototype 707 during the Seafair hydroplane races and the Kalakala begins ferrying between Port Angeles and Victoria, B.C. Syracuse and Fort Wayne contest the NBA Finals while the Los Angeles Danes become the first West Coast club to reach soccer’s U.S. Challenge Cup final.

With the Cold War as a backdrop, the 1954 World Cup in Switzerland served as a spectacle, not only of unbridled attacking play (5.38 goals per game) but also a few high-stakes East-West matchups, the most prominent of which was the Miracle of Bern, the final between all-powerful Hungary and West Germany. The Germans, 8-3 first-round losers to the Magnificent Magyrs, went down 2-nil in the first eight minutes only to rally and conquer, 3-2.

Washington’s follow-up season to that World Cup is contested by six clubs with an increasingly multi-national makeup. In January 1955, Alfred Apsler of The Seattle Times described to the masses the distinct Sunday afternoon scene at Seattle’s Lower Woodland Park:

“Small knots of spectators huddle around the chalked outlines of a playfield…the footballers in their long-sleeved blouses, the short pants that leave the knees bare and woolen stocking pass, kick and dribble enthusiastically…Listening to the players chatter about next Sunday’s engagements, one notices the strong representation of foreign accents. The Scottish brogue stands out clearly, but Scandinavian, German, Slavic and Southern European inflections also blend into the conversation.”

The first division this season consists teams with clear ethnic heritage. The champion Buchan Bakers are sponsored by a Scot and represented by a largely British cast, as do Scotty’s Fish & Chips. The Scandinavians tend to congregate on rosters of the formidable Vikings and Scandia, a new entry. Also relatively new to the circuit are the Greek-Americans. The sixth side, Harvey’s United Restaurants, is an outgrowth of Catholic Youth Organization all-stars in other words, local youth.

Refugees from Eastern Europe are beginning to arrive in Seattle, along with international students attending college. Many, writes Apsler, “are homesick for the sport with which they grew up. So, it appears soccer is supported mainly by those who lived in foreign countries or under the strong impact of foreign traditions.”

Barney Kempton, the junior soccer commissioner for the Puget Sound area, estimates 75 percent who participate or watch local matches are immigrants or sons thereof. Kempton’s youth leagues are swelling, and a club of young adults such as Harvey’s will share the pitch with those old enough to be their father. Austin Gunderson of the Vikings is a 47-year-old grandfather.

This may not be the World Cup, but soccer in Washington is very much a world game.

Many languages are spoken at Lower Woodland while playing a common game.

YEAR IN REVIEW
Bakers Make It 3 In A Row

Buchan Bakers complete the second half undefeated in 10 matches (8-0-2) with a 3-1 victory over Greek-Americans and five points clear of the Vikings. The Bakers clinch their third straight league title, having also won the first half.

Norselander Vikings deny Buchan a third major prize by beating the Bakers, 3-1, for the Pacific Coast Coal Trophy, emblematic of state soccer championship. Joe Njoku-Obi scores twice in the first half. The game, played before a ‘fine crowd’ at Olympic Stadium in Hoquiam, raises $500 for Grays Harbor Society of Crippled Children.

At Vancouver, Cathedral School of Seattle ties at Vancouver North Shore 2-2 to clinch the Oldershaw Trophy series, 4-3 on aggregate. Cathedral won the first leg at home, 2-1, on goals by brothers Fred and Gene Hall.

Vic Weston is among the organizers of a benefit match to raise funds for families of four miners lost in the Landsburg mine disaster. The sudden January 29 cave-in 600 feet underground occurred near Ravensdale. The game features oldtimers from Black Diamond and a Seattle selection.

It's St. John's in Extra Time

Alan Anderson, 12, of Highland Park School, wins The Seattle Times-Seattle Park Board Old Ossie title. Anderson, who learned to kick while playing soccer, kicked 11 punts, made one pass and one drop-kick for 16 points. Old Ossie is essentially a football punt, pass and kick contest.

WSFA officials decline to sponsor a stop by England’s touring Huddersfield Town in the spring. Huddersfield goes on to finish mid-table of the first division and plays friendlies versus local selections in Vancouver and Calgary, as well as five other cities across North America.

Joe Obi scores in each half as the Norselander Vikings pull away from the Portland State Vikings, 5-3, for a second straight Northwest championship at Catholic Memorial. First-half goals by Bob Simonsen, Obi and Thor Aanes put the hosts comfortably ahead at the break. Jimmy McGillivray's two strikes cut the lead before Roy Windsor and Obi respond. In the second part of the doubleheader, Buchan Bakers nip North Burnaby Legion, 4-3, in a Cascadia friendly.

Bill Conterio scores five goals for Buchan Bakers in a 12-3 romp over Harvey’s at White Center while Andy Phillips kicks 4 goals for Scotty’s Fish & Chips in a 4-3 win over Scandia at Woodland Park.

John P. Jones, former secretary-treasurer of the Washington State Soccer Football Association, dies of an apparent heart attack. Beyond his official role, Jones had been a referee and longtime promoter of the sport. He was born in England and raised in south Wales before arriving in Seattle in 1926.

Thor Aanes of Vikings, top scorer in league, sent off with 10 minutes left vs Greek Americans at Lower Woodland, was confronted by Greeks fan outside locker room. The Vikings win, 3-0. A December 19, 1954 meeting between the teams had resulted in a fight that prompted suspension of two Vikings by the WSFA.

A state league match between Scandia and Greek-Americans at Lower Woodland Park is halted in the 72nd minute when the ball goes flat. With no other ball available the game is abandoned with Scandia leading 3-1. League officials rule that the final 18 minutes must be played five weeks later, following the completion the teams’ second meeting, won by Scandia, 4-1. Greek-Americans, trailing by 3-1 when the initial game was suspended, rally with three goals to prevail in the restarted contest, 4-3.

“
Listening to the players chatter about next Sunday’s engagements, one notices the strong representation of foreign accents. The Scottish brogue stands out clearly, but Scandinavian, German, Slavic and Southern European inflections also blend into the conversation.
— Alfred Apsler, Seattle Times reporter, observing the atmosphere of a Sunday afternoon of state league play at Lower Woodland Park
“
Seattle used to be a great soccer town. The public schools played it till about 1932. Now there’s a movement to bring it back.
— Barney Kempton, state junior soccer commissioner 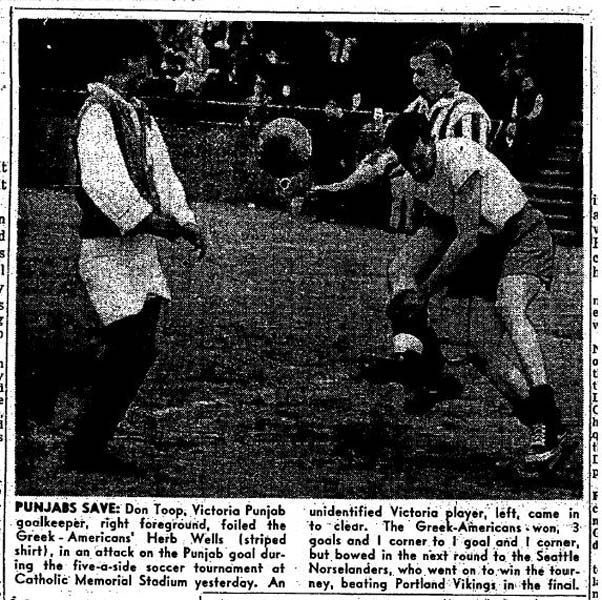 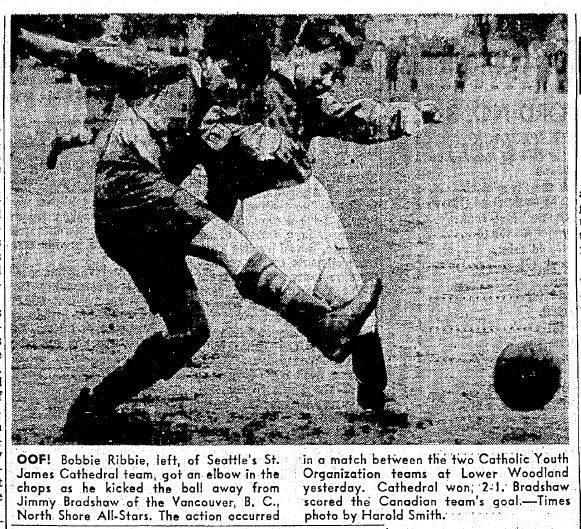 A vital win in the first leg put St. James in front, and Cathedral sealed the Oldershaw title with an away draw the next week. (Courtesy Seattle Times) 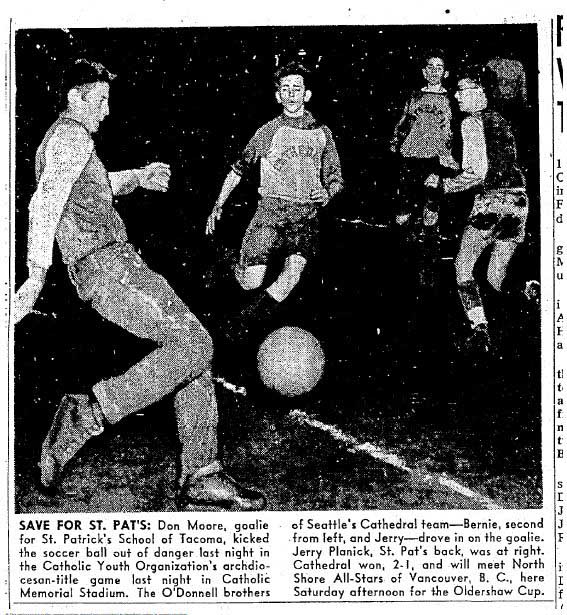 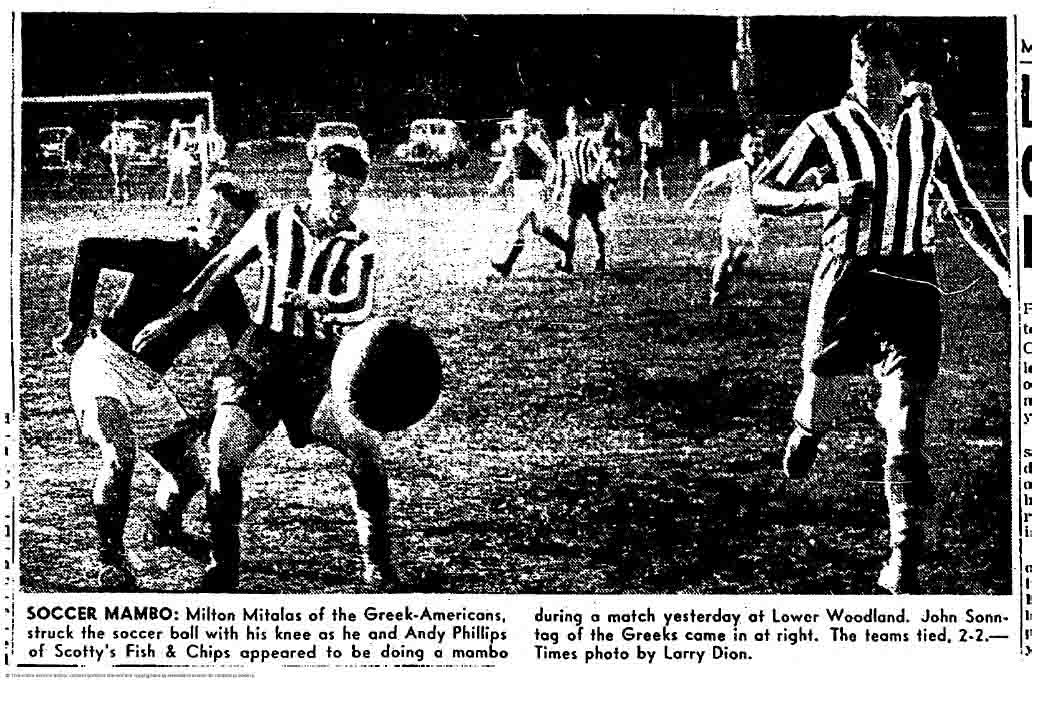 Immediately upon arriving at Lower Woodland the Greek-Americans were recognizable in their striped shirts. (Courtesy Seattle Times) 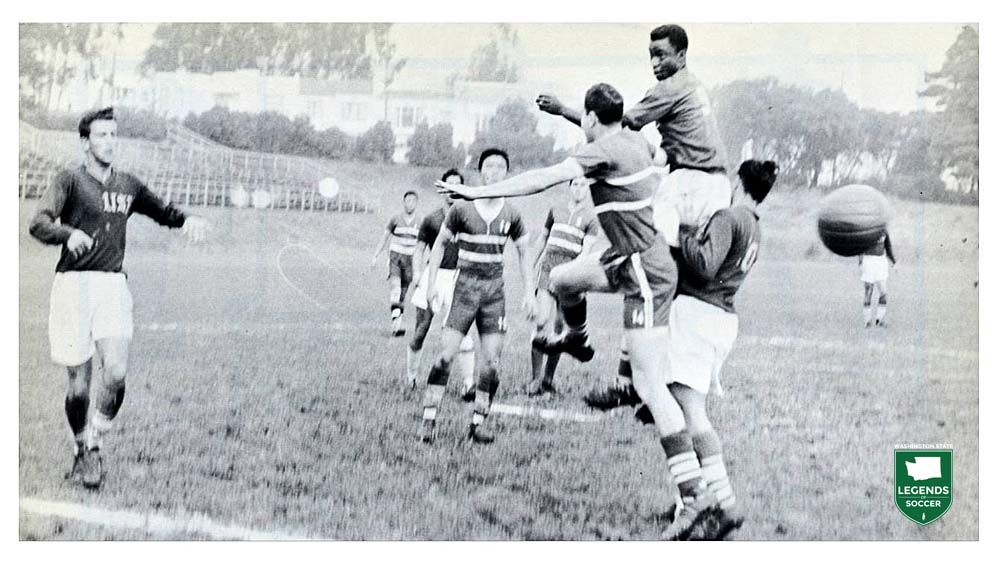 On this Day in History
Spokane Shadow completes an undefeated regular season by drawing at home with Kitsap Pumas, 1-1. Chase Reidt's volley from 30 yards puts Spokane ahead in the 66th minute. Tomas Jamett levels it with two minutes to go. It turns out to be the Pumas final outing. The Shadow win the NPSL Northwest Division at 7-0-5.
More from 2018 ›
Booth Gardner and Baseball Club Tacoma are approved as owners for an American Soccer League team after paying a $70,000 franchise fee. The team, later named the Tides, will share Cheney Stadium with the Twins of the Pacific Coast League. Because the Tides did not participate in the college draft, commissioner Bob Cousy will allow 11 foreign players rather than the normal limit of seven.
More from 1976 ›
Tacoma Rovers successfully repeat as boys' U19 state cup champions in Renton, with Brent Goulet scoring twice in a 2-1 defeat of Seattle's Wallbrook Wanderers. The same two teams met with an identical result in 1982. Goalpost, formed by a merger of Federal Way's Tigers and Wolfpack, blanks Sporthaus Schmetzer, 2-0, in U16s.
More from 1983 ›
Mike Washington, one of the state's longest-tenured college coaches, retires as Whitman College men's head coach. For 17 years, Washington guided the Missionaries, beginning with some lean seasons. But, over his final eight campaigns, Whitman won 10 or more matches four times, including a mark of 11-2-7 in 2008, when it was Northwest Conference runner-up. Washington is succeeded by Jose Cedeno.
More from 2015 ›
© Washington State Legends 2023.