Sunday afternoons at Seattle's Woodland Park had always been thick with a stew of western European accents and the sight of a fast, physical and direct style of soccer. Yet as a new decade dawned, a decidedly different and far more powerful brand broke free of the pack. The Hungarian revolution and arrived in full force in Washington.

Three [check] years after entering the state's first division, the Seattle Hungarians began to hit their stride and left the rest of the Northwest in their dust. Funded by Balint Ducz, whose Burien bakery put thousands of pastries on United Airlines flights each day, the Hungarians won the first of their league trophies in early April, then quickly added two more cup victories before May. It was the start of a run that would see out the Sixties.

Unlike many of the Germans, Irish, British, Italian and Scandinavian men of the state's first division who had come to postwar Seattle seeking opportunity to work in aircraft-related industries, the Hungarians were largely refugees. Les Fabri and Mike Kuczi were soldiers who saw their country overrun by Russian army and tanks in the 1956 uprising. They, along with the likes of Les Muller and Lou Vitez, were among the 9 million fleeing the Communists, first into neighboring countries such as Austria and eventually North America. Vitez and Muller came directly to Seattle, Fabri and Kuczi via Vancouver.

At the time of the revolution, Hungary's national team and Budapest Honvéd were regarded as world soccer royalty. The Mighty Magyars won the 1952 Olympic tournament and were runners-up in the '54 World Cup. Honvéd was in the middle of the European Cup play when the revolution was crushed, and many of the players refused to return home, instead finding safe haven in Western Europe.

Across the state, four Hungarian refugees formed the nucleus of the Spokane Spokes of the Western International League. Although those who landed in Seattle were not world-class, several were proven professionals or members of the vaunted Hungarian army selects. In either case, they were the most talented players ever to kick leather around Lower Woodland. In fact, Seattle's soccer playground was among the first stops for the first wave of Hungarian players arriving in late 1956. Soon they were joining up with existing first division sides, however it was not until autumn of 1958 that the Hungarians formed their own club. Once Fabri and Kuczi joined the fold, the pieces had all fallen into place and the trophy hunting began in earnest.

After a second-place showing in the league's first half, the Magyars ran amuck. Displaying an audacious attack and deadly finishing, they averaged more than six goals per game in the second half, going 7-0-1. Loyal Realty managed to battle the Hungarians on even terms for 120 minutes of the final, forcing a replay. But the Hungarians won that and the knockout cup the following week before brushing aside Portland's German Club, 5-3, for supremacy in the Northwest.

Five years after they were forced to flee their home country due to the Soviets' crushing their revolution, a talented cast of Hungarians became the dominant side in the Northwest

Jack Goldingay, a relocated British Columbian, starts the Eastside's first youth program through the Bellevue Boy Club. By 1962, it grows to more than 300 players.

Hungarians forward Les Mueller, 18, stars in sports seemingly year-round in Seattle. When he's not scoring in the state league on Sundays, the Budapest-born fullback and linebacker is a football force at Ballard High School. Nicknamed Crash and Carry, Mueller leads the Beavers to the Metro League championship game on Thanksgiving Day, witnessed by 12,000 fans.

BC Youth Reign in Cascadia

Leaving no doubt virtually from the opening kick, Seattle Hungarians put four goals past Portland's German Club without reply and go on to claim the Northwest Championship, 5-3, at Catholic Memorial Field. It is the third trophy for the Hungarians. It's the ninth straight win for a Washington side in the annual Cascadia season-ending derby. It's one of the final fixtures played at Catholic Memorial, which is condemned later in the year.

Les Mueller scores for the Seattle All-Stars but they drop a 3-1 decision to the Victoria All-Stars before 1,800 fans at Royal Athletic Park.

Italian I.S. manages a 2-2 draw with the Hungarians, delaying their clinching of the first-half title. The Italians (1-8-1) surprisingly go up 2-nil on Peter DiValentine’s free kick and Earl Olsen doubles the lead out of a goalmouth scramble. Alex Csabay cuts it to 2-1, and Alex Bogdan ties it on virtually the last kick on a sloppy West Seattle pitch.

Mike Kuczi scores four goals and Les Fabri three as the Hungarians rout Loyal Realty Vikings, 8-2, in the state knockout final at Lower Woodland. Fabri opens the scoring, Alex Bogdan hits from 20 yards and Kuczi’s free kick make it 3-nil at halftime. The Vikings briefly pull a goal back before the onslaught resumes.

In a replay of the state league final, second-half winner Seattle Hungarians edge defending champion Loyal Realty, 2-1, at West Seattle Stadium. It marks the first state league title for the Magyars. The teams tied, 2-2, two weeks earlier. Alfonso Aquila and Les Farkas stake the Magyars to a 2-nil lead within the first 10 minutes. Fridy Kristiansen gets the lone Vikings goal on a second-half breakaway.

The Spokane Spokes of the Western International Soccer League reach the Knockout Cup semifinals with a 6-0 rout of Scotty's. Roy Quellnal leads the Spokes with a hat trick. Spokane features four Hungarians who fought in their country's 1956 revolution.

Touring first division side Third Lanark, one of the highest-scoring teams in Scottish history with 100 goals the past season, is merciless in humbling the Seattle All-Stars, 9-0, before 2,000 at Memorial Stadium. After Les Muller misfires on two early Seattle chances, the Redcoats carve up the All-Stars with crisp, short passes. Matt Gray leads Lanark with a hat trick.

Ivo Ceschi's brace is the difference as the University of Washington club beats Washington State counterparts, 3-1, at Pullman. The Huskies sweep their eastern trip, having also won at Whitworth, 3-1.

Buchan Bakers sponsors a screening of the much-heralded 1960 European Cup final featuring Real Madrid and Eintracht Frankfurt before 135,000 in Glasgow. The 90-minute film, after multiple sold-out showings in Vancouver, is shown at Seattle's Palomar Theatre, with Bob Robertson-narrated highlights of the 1960 Rome Olympics and U.S. college season completing the fare.

“
This is the best side in our state in 10 years.
— Eddie Craggs, National Soccer Hall of Fame member, after seeing the Seattle Hungarians win its first two matches by a combined 11-1 score
“
I would like to have a scholarship to college. I prefer the University of Washington. But if that doesn't happen I will probably try professional soccer in Europe or South America.
— Les Muller, Ballard High School football and Seattle Hungarians star 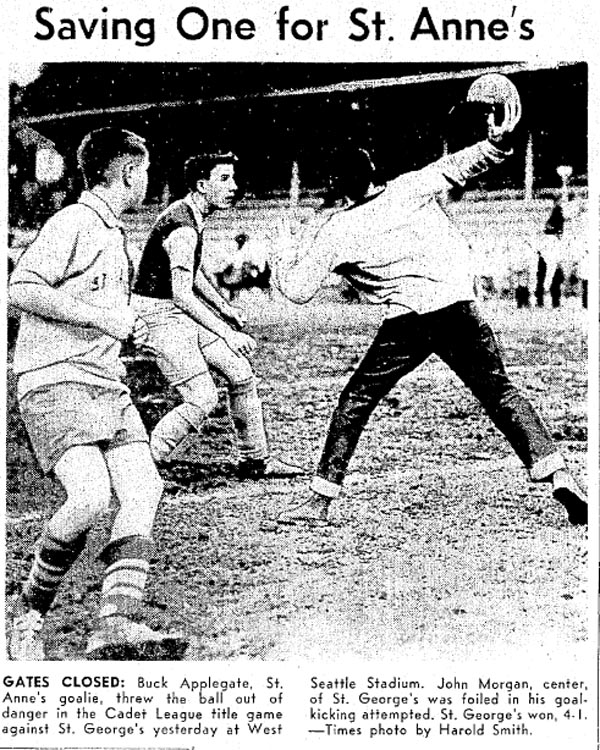 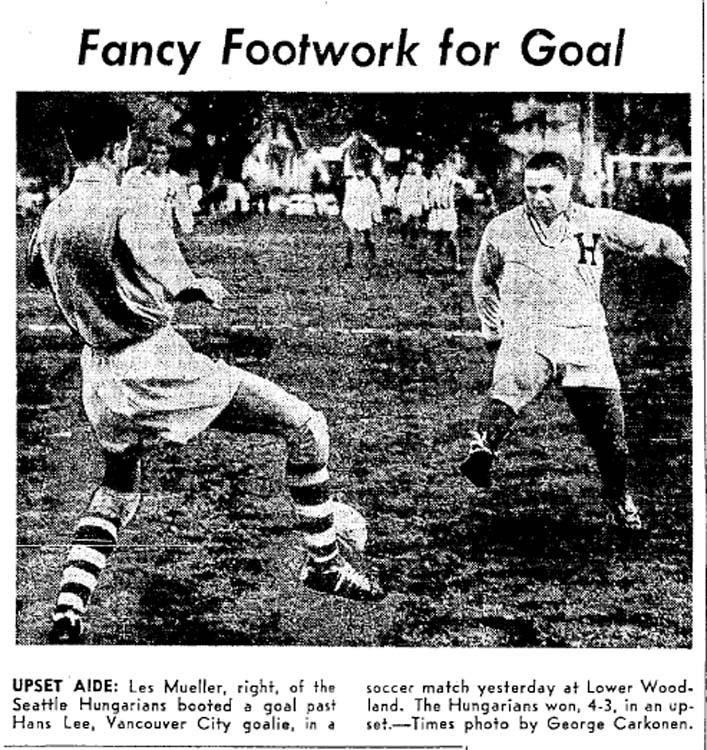 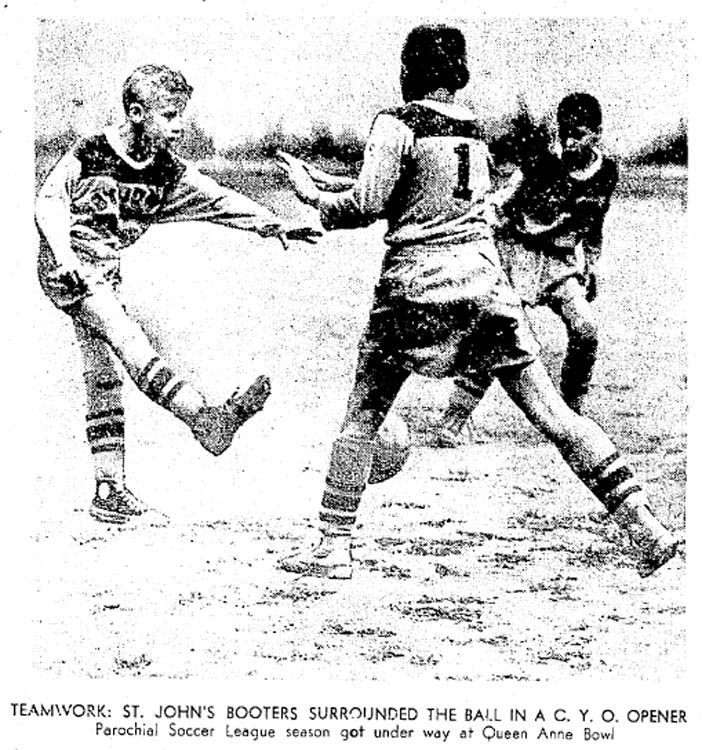 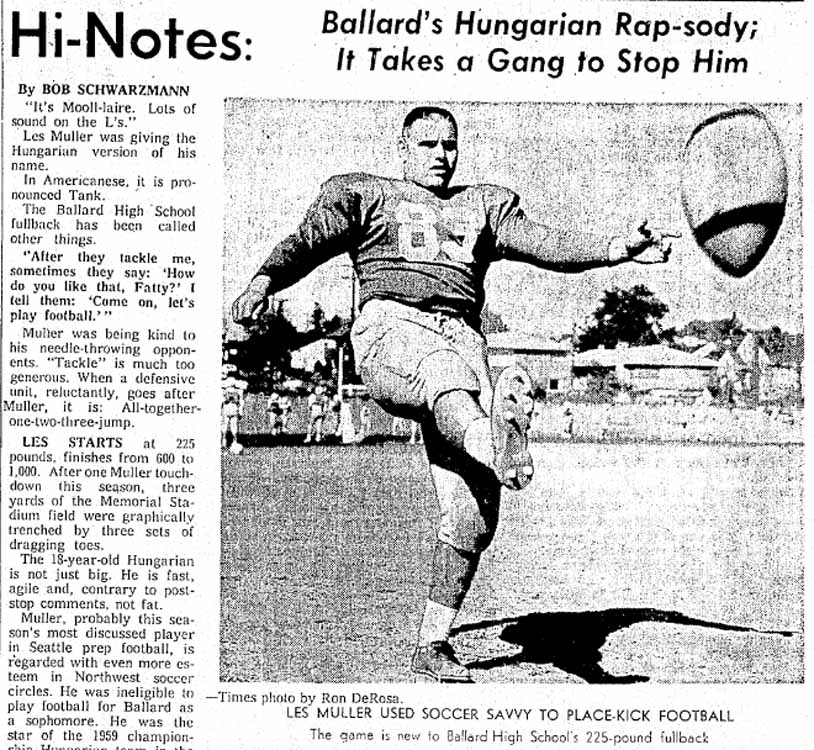 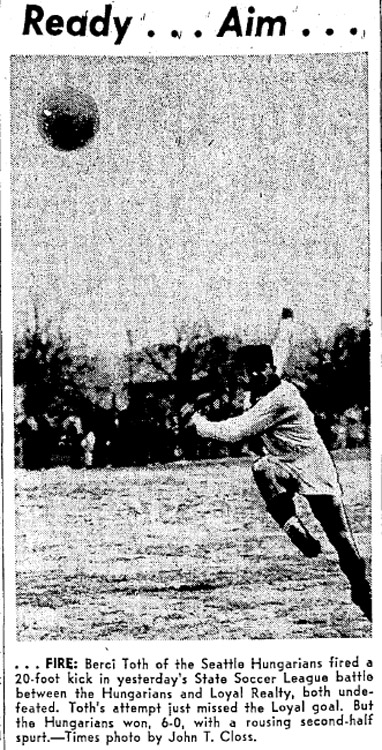 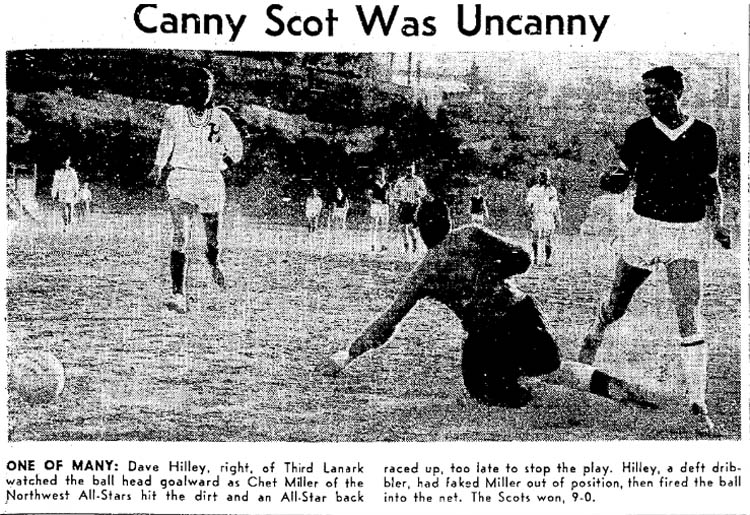 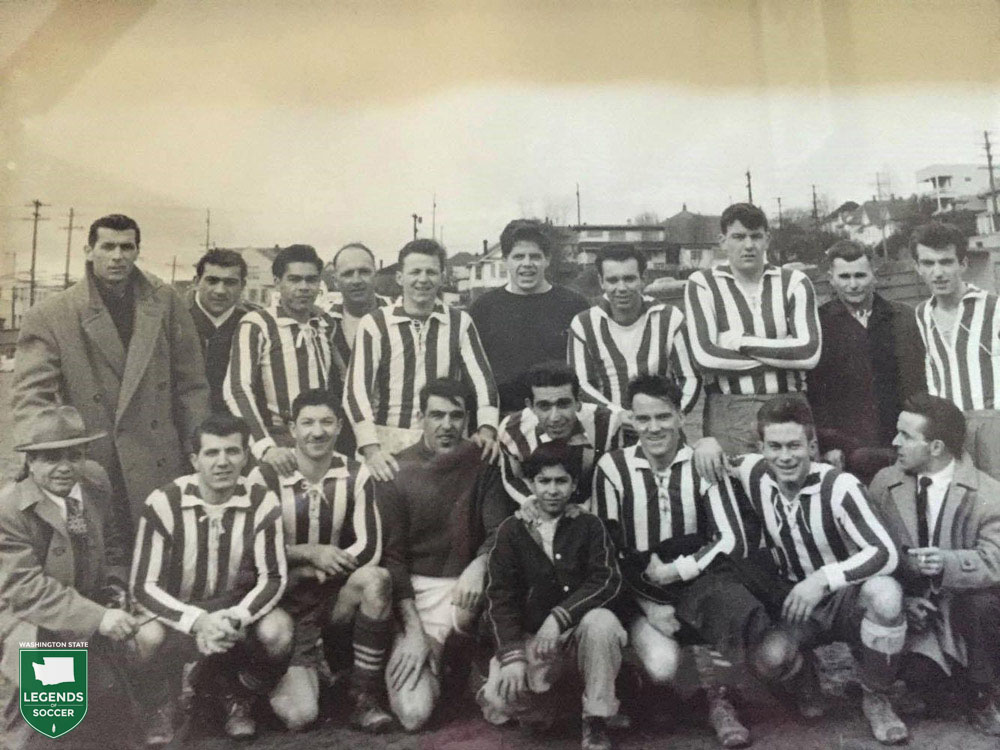 On this Day in History
Eighteen immigrant high-school boys who attend a special public school to learn English are excelling with their feet as a soccer team this spring. The students attend the Secondary Bilingual Orientation Center (BOC) on Seattle's Queen Anne Hill and are coached by Juan Carlos Torres, an instructional assistant at the school. The first-year team is 4-1-2 playing a schedule against high-school junior varsity and "C" teams.
More from 2006 ›
Without their top scorer, the Sounders cannot must much of an attack and fall to Montreal, 2-0, in the A-League final before 13,648 at Claude Robillard Sports Complex. Welton Melo serves his suspension after being sent off in the semifinal second leg at Vancouver. He had scored 12 goals, inclduing five as the sounders went 7-2-1 since August 2. Seattle manages just seven shots and is held scoreless for the first time in 11 matches. Mauricio Vincello put the Impact in front in the 33rd minute, but substitute Craig Tomlinson nearly equalizes in the 74th. Tomlinson tries loft softly over Greg Sutton but the Montreal keeper deflects it off the bar. Frederick Commodore seals the verdict with a goal four minutes later. It marks the final match for Jason Farrell (career assist leader with 30) and Darren Sawatzky. Both are retiring after lengthy careers with the Sounders and MLS.
More from 2004 ›
John Olu Molomo completes his second hat trick of season as the SeaDogs wrap-up their second season by drubbing playoff-bound Detroit, 11-5 before a record crowd of 6,592 at KeyArena. Olu Molomo, a midseason acquisition from San Diego, finishes with 17 goals and eight assists in 12 games. During those 12 games, Seattle is 6-6. The SeaDogs score six straight goals beginning late in the second quarter and extending into the fourth. Local products Tim Bartro, Ben Erickson and Shannon Murray score two goals apiece, and Erickson has team-high 22 goals altogether.
More from 1996 ›
Seattle CYO officials ban the St. Joseph’s fourth grade boys' team after using a 7-year-old girl through its first five games. The remaining games will be forfeited. Marisa Monroe is considered one of the team's top three players by St. Joe's coach Jere Carrasco. CYO officials say that while there is no rule prohibiting girls, it would “undermine the girl’s program and leave it high and dry.”
More from 1986 ›
© Washington State Legends 2023.