×
Collegians Step Up in Class

Collegians Step Up in Class

Apart from the annual U.S. Challenge (Open) Cup encounter, Washington soccer's exposure to the outside world was almost entirely limited to Oregon and British Columbia. That began to change in the autumn of 1972, with a couple of college coaches enticing visitors from afar. Better still, they maximized the opportunity by validating the rising quality of their respective teams.

Seattle Pacific's Cliff McCrath arrived in 1970 with a Rolodex packed with contacts back east, where he had coached for 11 seasons. One of his associates was 1950 World Cup hero, Harry Keough, and now the coach of the most dominant collegiate program in the land, St. Louis University. Long a city rich in talent and tradition, St. Louis had claimed seven NCAA championships and McCrath rang Keough's number. The Billikens were about to embark on their first regular season trip to the West, and McCrath was keen on luring them north in late September. So, in addition to stops in Denver and San Francisco, Keough agreed to play two nights only in Seattle, at Washington and Seattle Pacific.

While McCrath was working the phones, the Huskies' Mike Ryan was dreaming of drawing big crowds into cavernous Husky Stadium to see the best teams in the West each October. To that point, Washington had never ventured outside the Northwest but for a disastrous 1968 postseason debut. Now, through fundraising, he was offering return games in exchange for four proven California schools– California, Chico State, UCLA and San Jose State–entering a three-day, three-game tournament involving four Washington teams (SPC, Seattle University, Washington and Western Washington). These were the first steps in traveling and testing homegrown selections against the best in the region and, in the case of St. Louis, the nation.

St. Louis arrived on Montlake having drubbed Air Force and Metropolitan State by a combined count of 12-2. Washington proved a stingy host, holding on for a scoreless draw. The following night, across town at Memorial Stadium, the Falcons scored their first upset of a Division I power, getting a late equalizer to end 1-1. St. Louis was playing for the fourth time in as many nights, yet would end the trip with two wins in the Bay Area. By December, Keough would lift the NCAA trophy for an eighth time.

Soon Ryan was mobilizing the youth clubs around Puget Sound to come see the Husky Soccer Classic. Tapping into the enthusiasm generated by the results versus St. Louis, over 3,000 tickets were sold in advance for the tournament's final day, Oct. 14. Although neither the Huskies nor Falcons advanced in the winners bracket, dropping openers to Chico State and UCLA, respectively, a state record collegiate crowd of 5,000 created a lively atmosphere inside the huge arena. San Jose State, with Olympian Jim Zylker playing a prominent role, edged Chico for the tourney title, 1-0. Earlier in the day, Seattle Pacific scored its second shocker in three weeks, beating Cal, 3-0.

By expanding the horizon, Ryan and McCrath and their respective teams reaped rewards for both the short and long run. Washington and Seattle Pacific earned postseason bids in November, and in subsequent seasons each program would grow more competitive with the more established California programs, and local college games began drawing bigger and bigger crowds.

At the top of the state league, a new entity was etched into the trophy base, but it was a familiar cast clutching the cup. Rainier Brewers, runners-up the previous year, won out over Triumph Continentals and Olympia Vikings. The Brewers, managed by Robin Chalmers, feature several members of the Sixties juggernaut Seattle Hungarians, most notably Mike Kuczi, Zoltan Mako, Alex Bogdan and Les Muller. Rainier, the second-half winner, beat the Olys, 5-1, to cap the campaign.

Washington and Seattle Pacific finish on even terms with powerhouse St. Louis en route to returning to their respective NCAA tournaments

Mike Kuczi's brace leads Rainier Brewers to a 5-1 victory over defending champion Olympia Brewing Vikings at Memorial Stadium. The Vikings had won the first half of the season's first division and Rainiers had claimed the second half. Washington State won the second division and Pacific Lutheran the third tier.

Seattle Pacific goalkeeper Rex Yoder saves a record 14 shots in vain as Cal State Fullerton completes a two-match sweep of the Huskies and Falcons with a 3-1 win at Interbay Field. Rafael Ramirez scores twice and sets-up the third for the Titans. Yoder ties his mark a month later in an NCAA tournament loss at Chico State.

For the second year in a row Seattle Pacific reaches the NCAA Division II tournament, only to again be turned back by Chico State. However, the Falcons, who end the regular season by winning nine and tying one, narrow the gap. After losing by seven goals a year earlier they fall, 3-2.

Gordy McIntyre's second-half goal for Shoreline High School proves the difference in the state's first high school championship game against Everett, 1-0. The unsanctioned title featured the winners of the Metro and Wesco.

Soccer a Threat to Football?

Junior high school principals in Kingco approve adding boys soccer, and since it is not yet a sanctioned sport for WIAA, players can participate in both school and club games during the fall.

A longtime institution on Sundays at Lower Woodland, the state league's first division moves to the Astroturf of Memorial Stadium with a triple-header and admission fee of $1.50 for adults.

National Soccer Hall of Fame member Eddie Craggs, 75, is honored with a banquet. The State league championship trophy is named for Craggs, who states: "I had to coax them to leave the word 'memorial' out of the engraving. I figure to be around presenting it for years to come."

St. Joseph's gets a late header from Mike Gates to claim the CYO Cadet Division title, 3-2, over St. Luke's.

Washington returns to the NCAA tournament for the first time in four years and, after remaining scoreless for the first half, is humbled by UCLA, 5-0. The Bruins go on to face St. Louis in the NCAA final.

Northwest Soccer Camp begins when Cliff McCrath and Mike Ryan share with each other that soccer was growing so fast that neither of them can keep pace with the scores of requests from players, coaches, and parents to assist them with player development, coaching seminars, and training sessions. It all begins at Camp Casey on Whidbey Island: one week, 30 resident campers, four coaches and a budget of $2,200. Meals are donated and no cost to campers.

Tom Webb is elected president of Washington State Soccer Association, along with a new board that includes Jack Mickelberry as secretary-treasurer, replacing Eddie Craggs, who retires after more than 20 years at the post.

Diehard fans flock across the border to see Pelé and Santos visit Vancouver's Empire Stadium. Pelé doesn't score but his Brazil teammate Edu does twice to crush the B.C. Premier League All-Stars, 5-0, before 16,300.

At the Washington State Youth Soccer Annual General Meeting in June, girls soccer becomes part of the organization, with state tournament play to commence in 1973.

During February and March, Washington and British Columbia youth players flood the border crossings for the 10th annual Canadian Exchange Series, promoting the game as well as friendships between teams from the Seattle and Vancouver areas. In all, 703 teams from U8 to U16 participate.

Eight-time NCAA champion St. Louis University would go on to take its ninth title less than three months later, but Harry Keough's Billikens do not emerge unscathed from their first visit to Washington. First, the Huskies and freshman keeper Ed Fillion hold SLU to a scoreless draw. One night later, out-shot 5-8, Seattle Pacific gets acrobatic saves from Rex Yoder and a long-range equalizer from Doug McKenna for a 1-1 tie at Memorial Stadium. St. Louis features Hermann Trophy winner and Olympian Mike Seerey among its many future professionals.

Billed as the state's first professional club, the Seattle Wolves debut with a 3-1 win over touring Wolfsburg-Goettingen of West Germany's second tier. If all goes well, Wolves owner Johnny Haas intends to petition for an NASL club in 1973 or '74. However, less than a thousand attend the Highline Stadium exhibition which stars guest player Jackie Charlton.

Pacific Lutheran's diminutive forward, Abraham Abe, is voted player of the year in the Northwest Collegiate Soccer Conference, despite the Lutes finishing a distant third behind Washington and Seattle Pacific. The Falcons' Ken Covell finishes as top scorer with 18 goals and Ward Forrest sets a new UW mark with 14.

“
We started (four years ago) with 40 boys. Now we have 2,000 boys and girls in an area that equals the Lake Washington School District.
— Burt Dutton, co-founder, Lake Washington Junior Soccer Association
“
The kids all stay with families, but any parents who travel with the teams stay in hotels. For the parents, it can almost be a second honeymoon, getting rid of the kids for a night.
— Tommy Grieve, youth publicist, regarding Canadian Exchange
“
As the sport grows in popularity because of the kid program, markets will also grow. Here in Seattle, we feel we already have a market. We consider Seattle a soccer city.
— Phil Woosnam, NASL Commissioner
Collegiate Men's Records
Washington State Youth Cup Winners 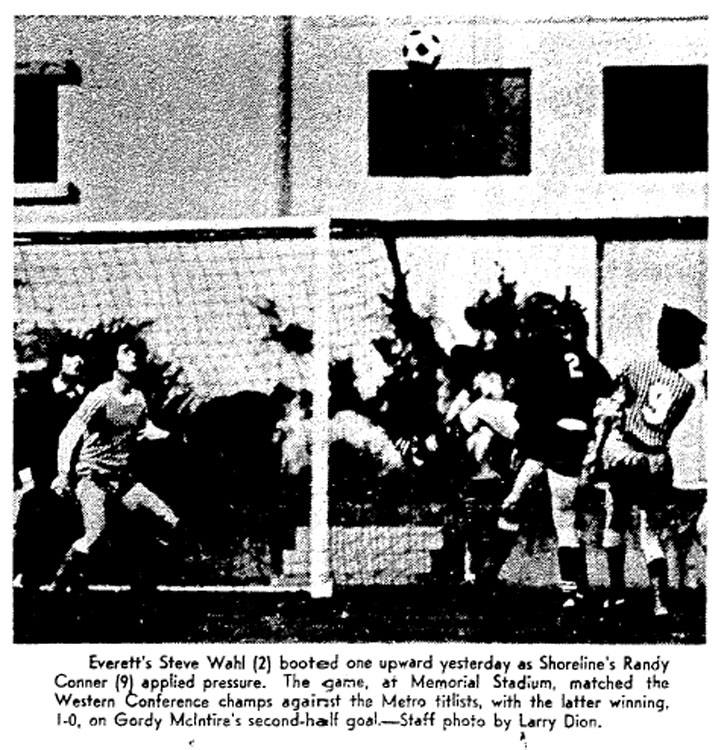 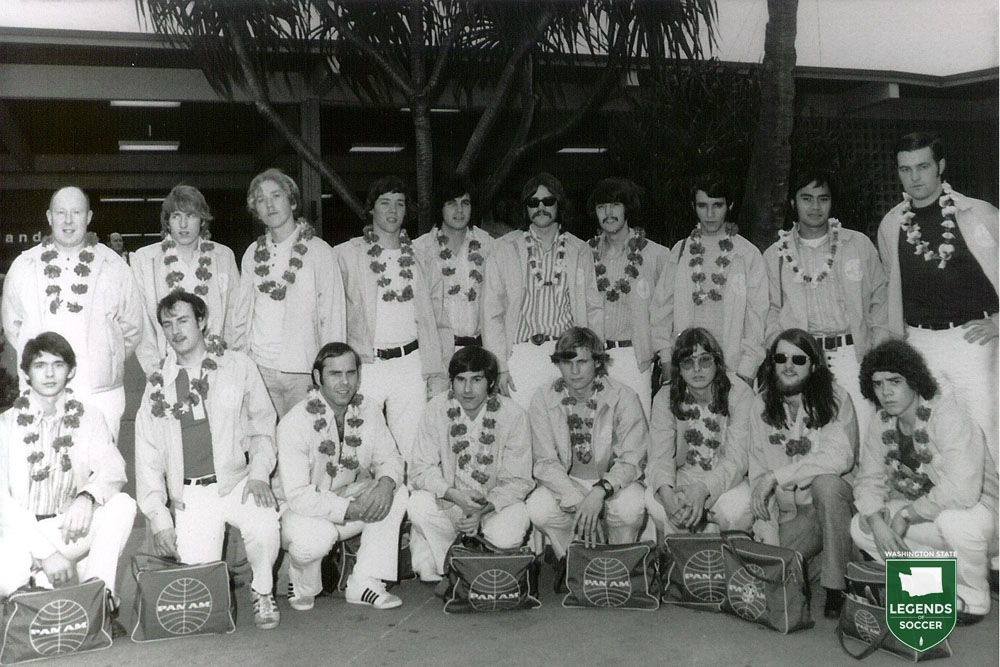 A top side in the state first division, a young Triumph Continental club flew to Honolulu for the Rainbow Invitational in March, taking second to San Jose, 1-0, in the final. 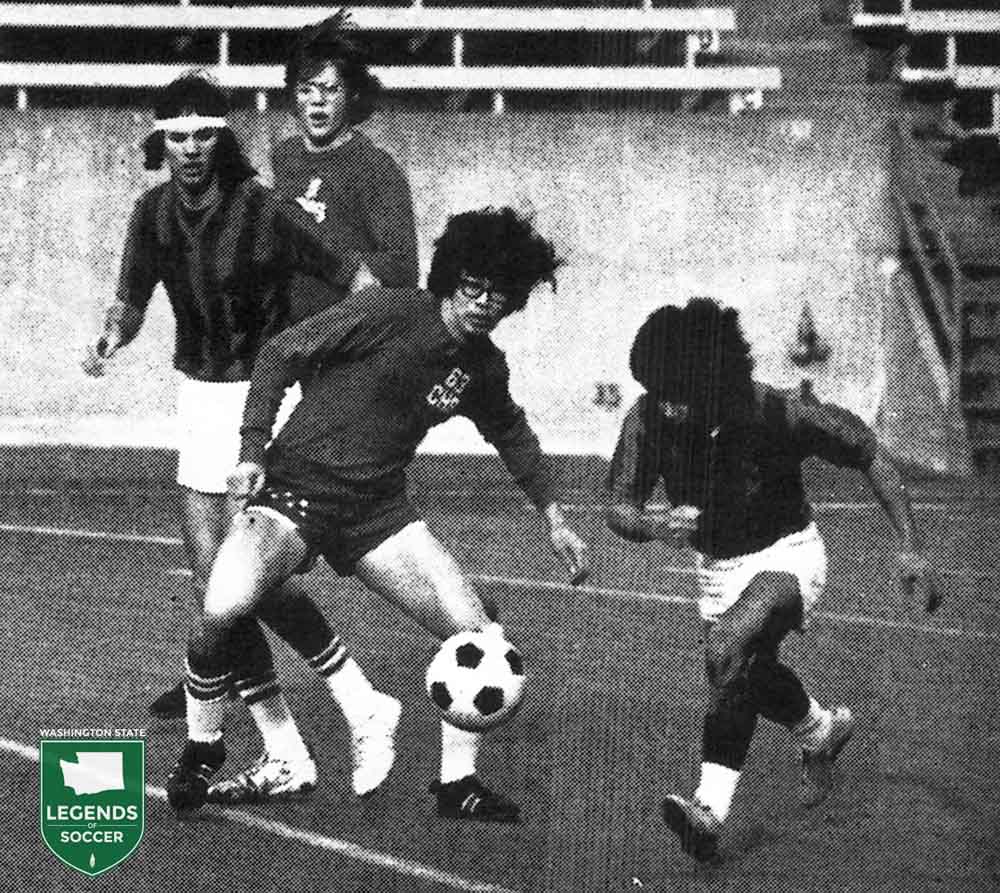 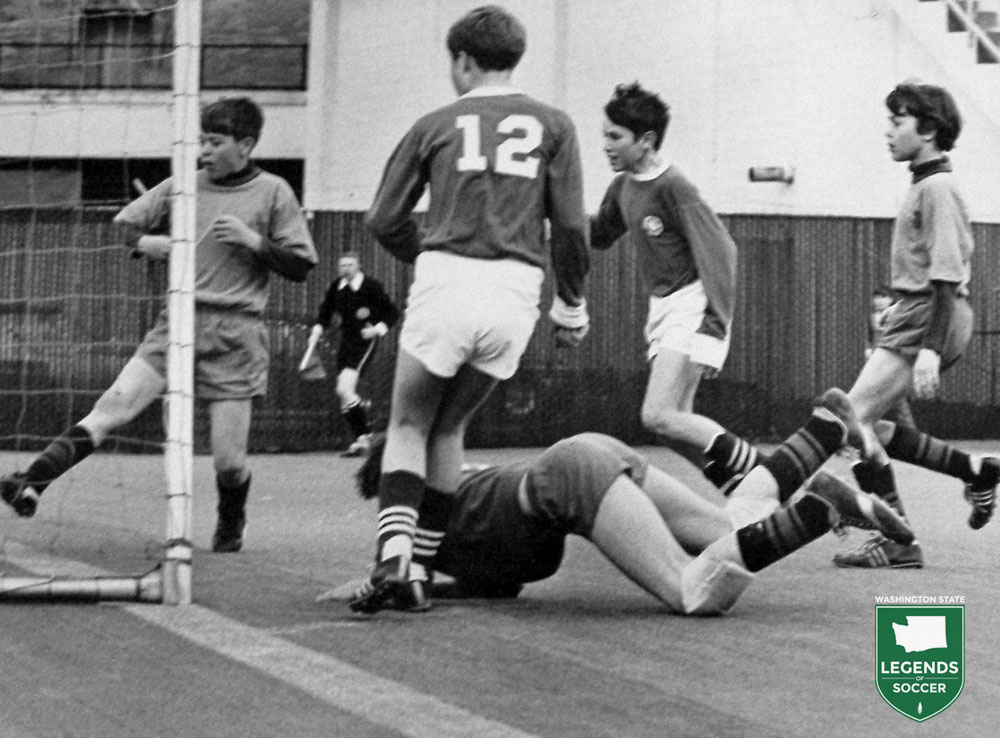 Adding to the kids' thrill of playing for a state championship was the opportunity to do so on Memorial Stadium's Astroturf. 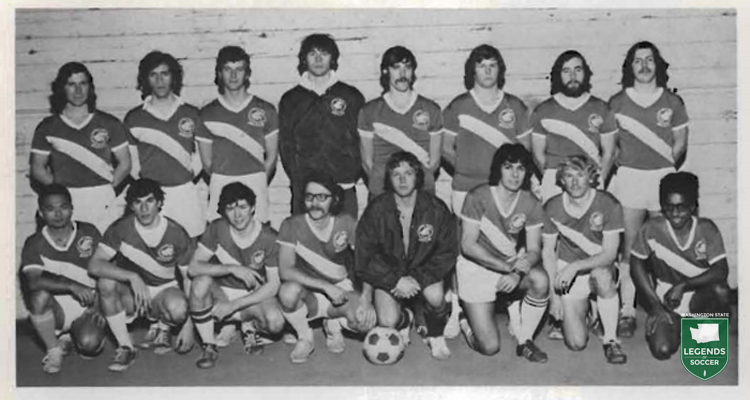 In 1972, only five varsity, four-year collegiate programs existed in Washington. All were men's and located in Puget Sound. However virtually every other school featured clubs, such as Washington State, shown here. 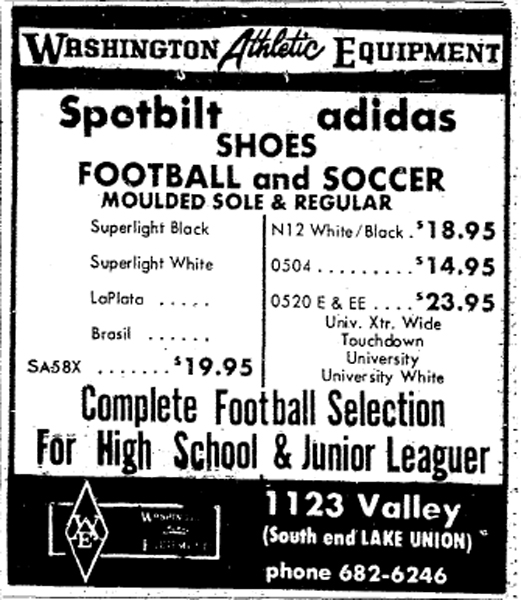 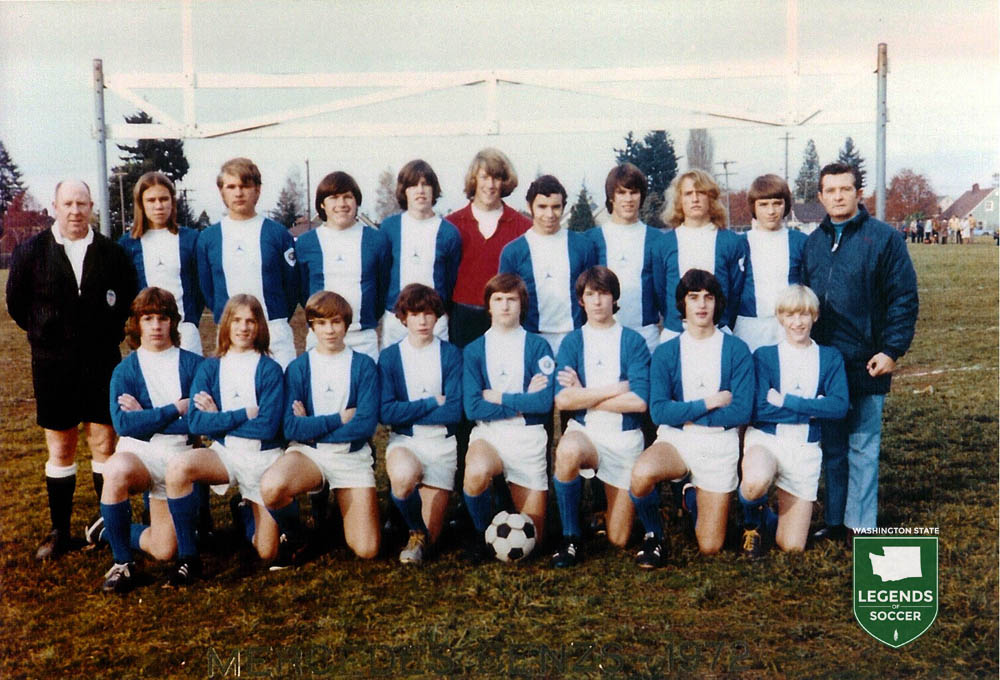 If Mike Ryan (far left) wasn't coaching the University of Washington or a state men's league club, he could likely be found doing so with a youth team such as Mercedes Benz. 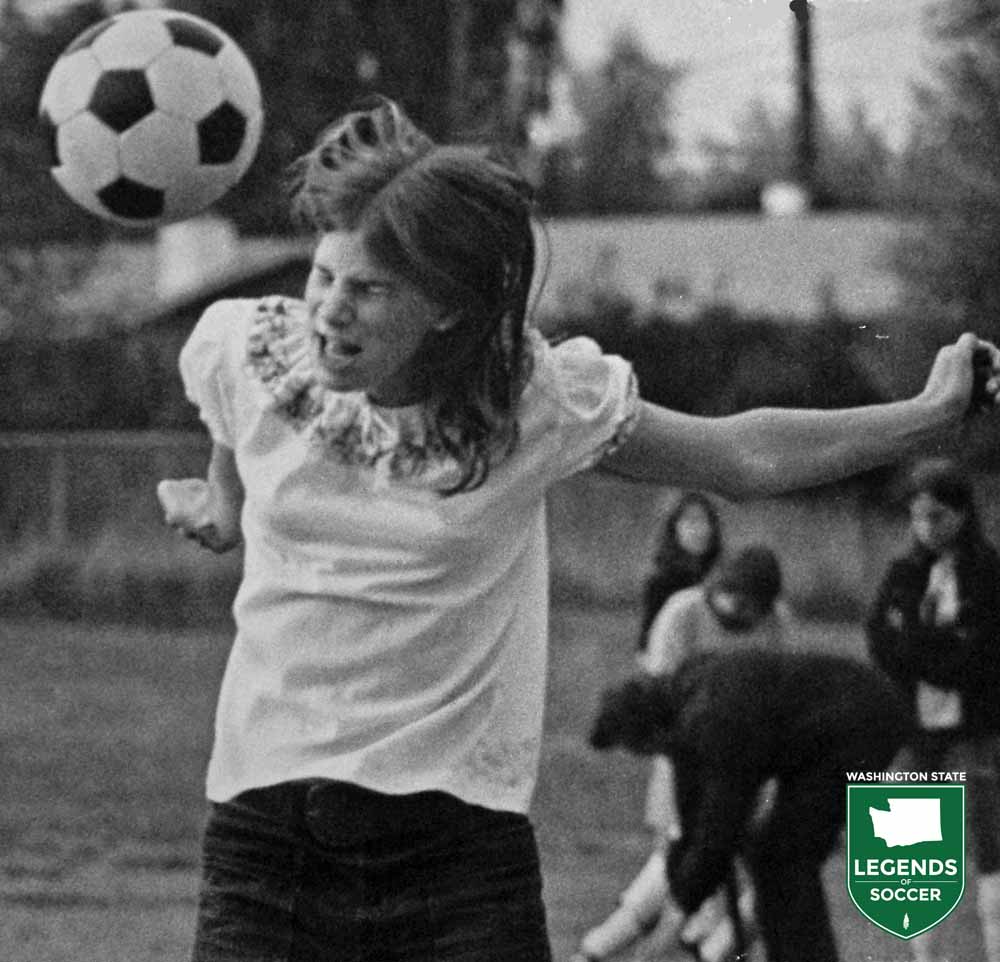 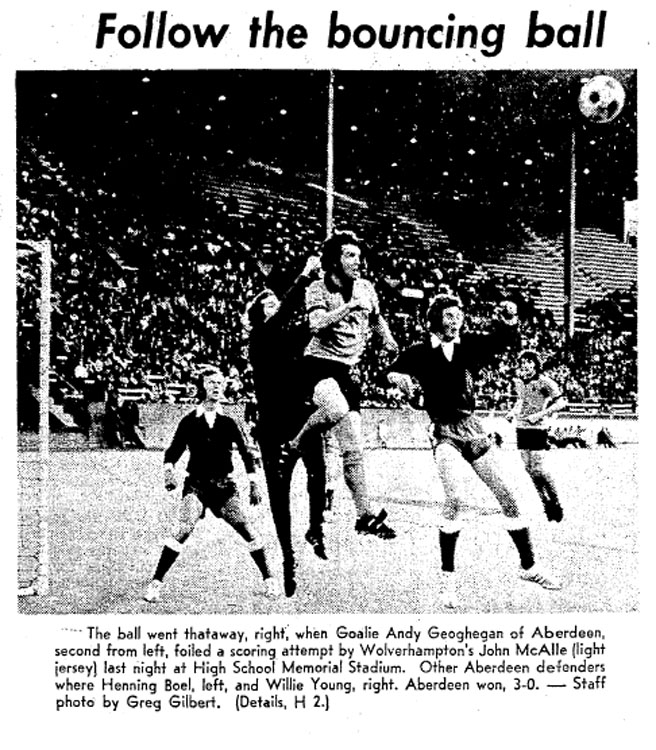 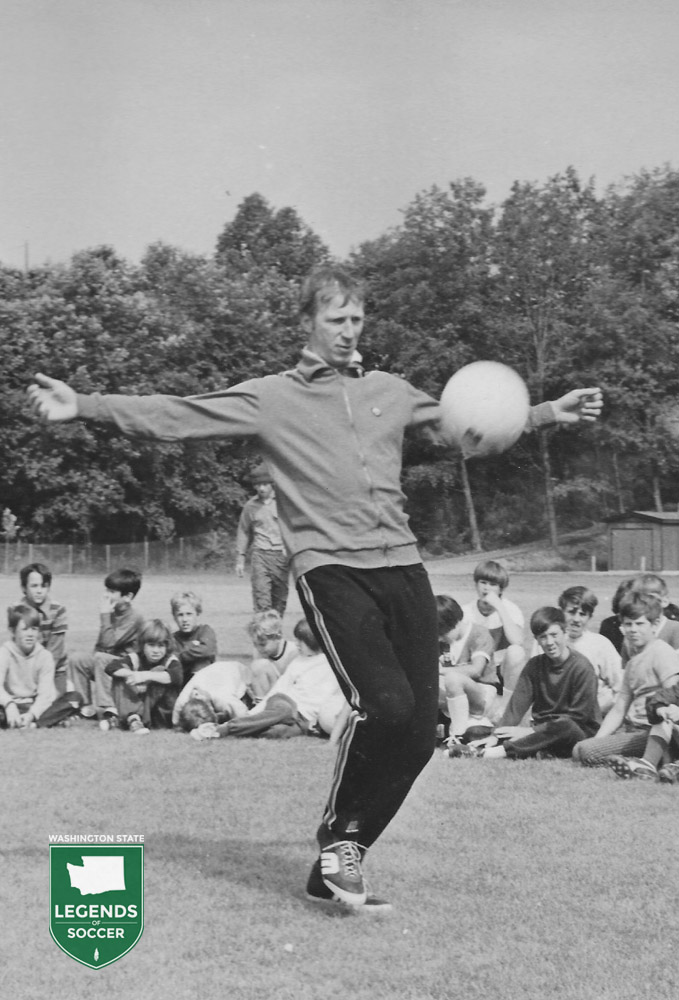 On this Day in History
Defending A-League champion Rochester Ragin’ Rhinos upset the MLS Colorado Rapids, 2-0, in the U.S. open Cup final. Burien native Nate Daligcon starts in midfield for Rochester and Darren Sawatzky is up front for Colorado. Daligcon, traded by the Sounders after starting for their 1996 A-League champions, becomes a fixture in Rochester’s perennial success. He plays in four straight (1998-2001) A-League finals, winning three.
More from 1999 ›
Reign FC's Megan Rapinoe converts two penalty kicks to lead the United States past Spain in a World Cup knockout match, 2-1 at a steamy Reims, France. Rapinoe’s first comes in the seventh minute. With it tied, 1-1 in the 75th minute, video review is used to confirm a foul on Rose Lavelle that gives the pink-haired Rapinoe the game-winner, slotting the ball just under the outstretched arm of goalkeeper Sandra Panos. It's the captain's second and third goals of the tournament.
More from 2019 ›
Senior defender Zach Scott scores only the fifth hat trick in Gonzaga program history – all on headers – as the Bulldogs stun 17th-ranked Loyola Marymount, 4-1, at Martin Field. Taylor McCool stakes the Zags to a 4th-minute lead and Scott's first goal doubles it in the 16th. He adds goals in the 54th and 69th minutes. Unbeaten now in six outings, Gonzaga is ranked No. 16 the following week.
More from 2001 ›
FC Seattle president Bill Sage is announced as a consultant to the U.S. Soccer Federation. Sage, who will be unpaid, will work on a five-year business plan for the new U.S. league due to begin play following the 1994 World Cup.
More from 1991 ›
© Washington State Legends 2021.