Dwight Eisenhower is inaugurated as the 34th President of the United States, several weeks later Soviet leader Joseph Stalin dies and by year’s end the Korean conflict hostilities cease with an armistice agreement. Mount Everest is summitted, DNA discovered and the first open-heart surgery performed. At home, Eastside community of Bellevue, population about 10,000, is incorporated and in Seattle the Alaskan Way Viaduct opens for traffic. In American sports, the Yankees win the World Series over the Brooklyn Dodgers in six games of a Subway Series and the Minneapolis Lakers repeat as NBA champions and the single U.S. National Team soccer match is a friendly versus England before less than 8,000 in Yankee Stadium.

When Eddie Craggs sought a sponsor for his fledgling soccer club, he did not stray far from his Ballard base, nor was it necessary. Seattle’s Wallingford neighborhood was home to one of the region’s foremost bread-makers, as well as title sponsor to a rising amateur basketball power. Craggs convinced George Buchan, a Scotsman and founder of the Buchan Baking Co., that local soccer was fast growing in popularity and the nearby Fremont Boys Club team was worthy of backing.

At the time of his pitch, Fremont ruled the senior youth ranks, and Craggs wanted these growing boys to new play amongst the men of the State Senior First Division. Buchan’s basketball team had grown into a state AAU champion in its first five years. It took Craggs just three seasons to groom their soccer namesakes into a champion in their own right. In 1953, Buchan Bakers upset Norselander Vikings in the playoff for the league championship and the first of the Dough Boys’ five straight titles.

Buchan began the campaign in unspectacular fashion, finishing fifth in the first half. Yet they bolt out of gates in the New Year, winning four in a row, highlighted by a 4-3 rain-soaked win over the first-half winner Vikings. Five weeks later, the Bakers again found the odd goal versus the Vikings, in extra time, to claim their first league prize.

Buchan later consolidates its position as the best in the Northwest by reclaiming the Northwest championship from Portland’s Clan McCleay and taking the five-a-side tournament. Green Lake Bowl, third during the second half, proves master of tournament play. First, they deny Buchan the double by rallying from two goals down in the George Washington Cup final, then lifting the knockout cup in April.

The recipe for repeated state league success involves mixing together a collection of largely Brits to form the legendary Buchan Bakers.

Matt Busby, Manchester United manager, conducts a coaching clinic on behalf of USSF at Seattle auditorium (5th & Wall). The Busby Babes had won the 1952 English first division and Busby had managed the 1948 Great Britain team to the semifinals of the Olympic Games.

Buchan Bakers win their first state league championship with a 3-2 extra time victory over Norselander Vikings at Lower Woodland Park. Jim McGilloway gets the winner. Twice the Bakers were forced to pull a goal back. Hewitt McCloskey canceled out Tommy Grieve’s opener and Bill Phillips sent the game into extra time after Erling Hansen put the Vikings in front again.

Manual Ortiz fires home all three goals as Buchan Baking Company reclaims Northwest bragging rights for Washington with a 3-1 defeat of Portland’s Clan McCleay at Catholic Memorial Stadium. In the first half of the doubleheader, Norselander Vikings shell the Portland Vikings, 9-1, to retain the Sandy Bergman trophy.

Bakers Cook in Second Half

Fit to Be Tied After 150 Minutes

Wickman’s Pies and Tacoma play 150 minutes without settling matters in George Washington Cup first-round match at Seattle’s Georgetown playfield. The teams are tied 2-2 after regulation, 3-3 after 30 minutes of extra time and 4-4 following another period. Players from both teams are exhausted and unable to play on.

The Foot of Thor Scores 8

Thor Aanes explodes for eight goals as Tacoma AC crushes Harvey’s, 9-4, at Jefferson Park. In Seattle, George Craggs scores for Buchans in a 1-1 draw with Scotty’s. 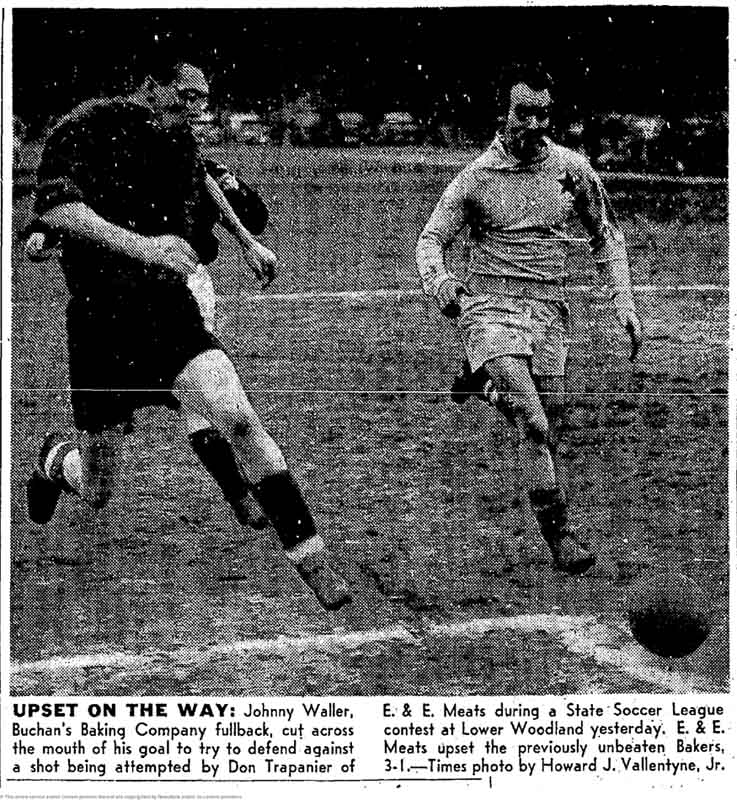 With the distinctive star over their heart, E&E Meats delivered one of the few blemishes to the Bakers' 1953 championship campaign. (Courtesy Seattle Times)

Thor Ronning, an attacking force for the Vikings, was unable to score and stop Buchan Bakers from winning their first state league title. (Courtesy Seattle Times) 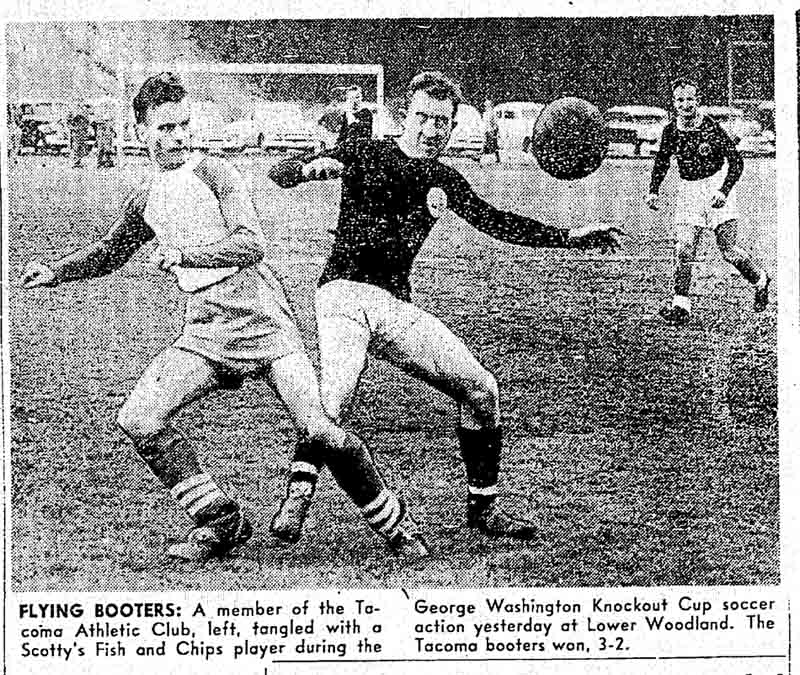 Tacoma and Scotty's, two teams that finished out of contention in league play, meet in a first-round knockout tie. (Courtesy Seattle Times) 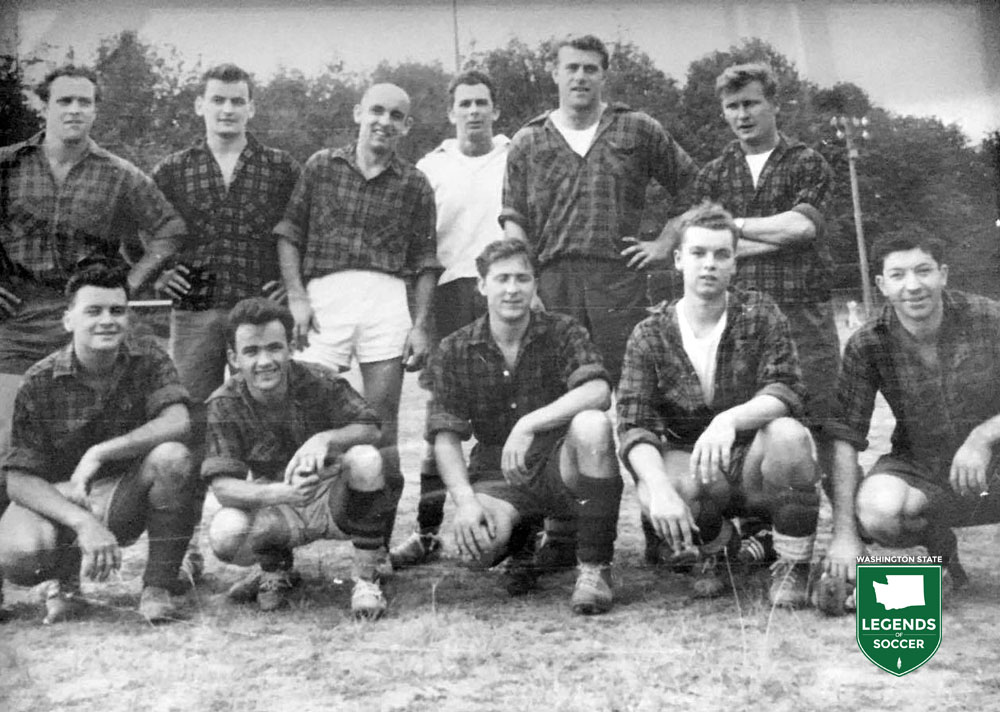 Common attire in the state league was a work shirt, but Buchan Bakers took it to another level by donning a red tartan to resemble the bread wrapper of their sponsor. (Courtesy Peter Mitalas) 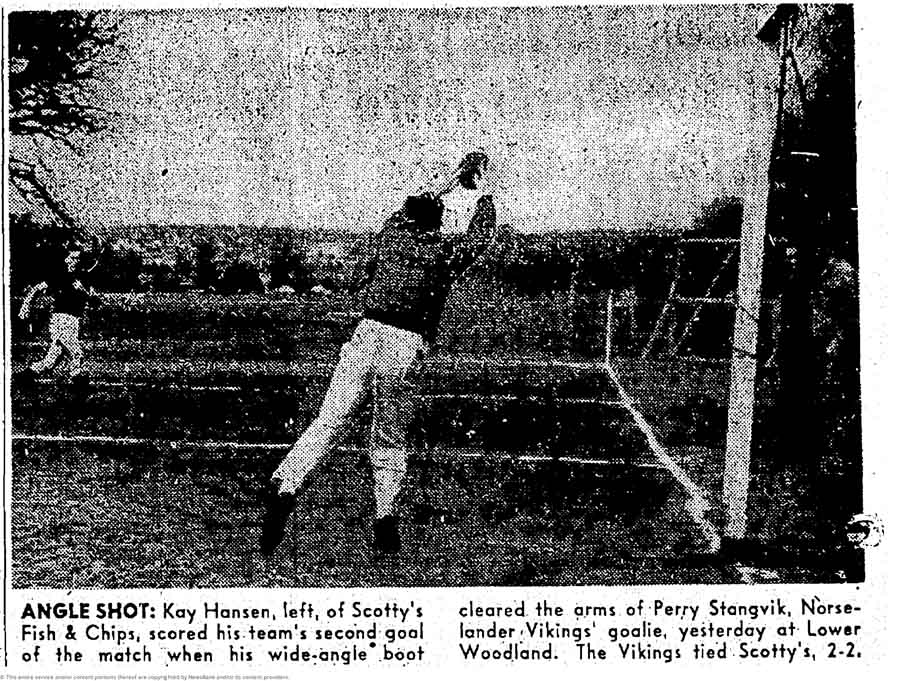 Vikings keeper Perry Stangvik was beaten here, but he always had another sport to fall back upon. Stangvik, who starred at Seattle Pacific College from 1949-52, then signed with the Brooklyn Dodgers organization. (Courtesy Seattle Times)

On this Day in History
Two years after being eliminated by Georgetown, Washington returns the favor at the NCAA semifinal stage. Making their College Cup debut, the Huskies dispatch the Hoyas, 2-1, at Cary, N.C. After 45 minutes without either side mustering a shot on goal, Lucas Meek breaks the ice. In the 54th minute Meek whips a ball with pace and spin through the box and into the back of the net. Only three minutes later, Charlie Ostrem increases the UW lead with a firm, bending shot from outside the box to the far post. Georgetown, which beat Washington in a 2019 quarterfinal, pulls a goal back in the 80th minute.
More from 2021 ›
Leah Wymer's hat trick and Ashley Porter's three assists lead Seattle University past Northwest Nazarene, 6-0, at Championship Field. Porter, a senior, becomes the GNAC career leader in assists and goes on to total 14 for the season.
More from 2005 ›
Dusty Hudock, Washington's standout senior goalkeeper, is named to the second team of the NSCAA men's All-America team for the second time. Hudock finished with a 0.97 GAA as the Huskies went 9-5-4. Melanie Brennan, UW defensive MVP, becomes the first All-American for the women's program, also making the second team.
More from 1993 ›
Washington wastes no time in getting in front in its NCAA opener and goes to to blank Liberty, 3-0, in Matthews, N.C. It's UW's biggest postseason margin of victory since 2010 and a 4-nil scoreline vs. Oklahoma. Just 67 seconds into the match, Ameera Hussen put the Huskies up. Karlee Stueckle and Olivia Van der Jagt tally on either side of halftime.
More from 2021 ›
© Washington State Legends 2023.