×
Soccer Pivots Toward the Light

If there was a month when American soccer – and Washington along with it – pivoted toward the light, it was July 1988. With the professional outdoor game under water and now Major Indoor Soccer League beginning to circle the drain, the soccer community was in dire need of good news. It arrived in the wee hours of Independence Day.

The world’s game had long struggled to gain a firm foothold in America, and FIFA sought to remedy that by awarding the 1994 World Cup to the United States. Washington state residents are particularly anxious because Seattle’s Husky Stadium is among the venues under consideration for matches. Still, word of that decision would be 2-3 years away. If there was anything the soccer community would again have to exercise, it would be patience.

For young players, however, the World Cup represented a goal, finally something to shoot for. Included in the U.S. bid was a promise to re-launch a professional league. The national team, which hadn’t played in a World Cup since 1950, would require added investment, if it was to hold its own amongst the globe’s giants in six years’ time.

By the end of the month, there would be other telltale signs that the highest levels of the sport were on the rebound. More than 10,000 attended the final two FC Seattle home games, combined before that, the club gatherings had numbered around 1,500. Some of it could be attributed to nostalgia (a Seattle Sounders reunion game), rivalry (Portland being the opponent in the doubleheader) and the attraction of playing for a championship (the Storm beating San Jose convincingly). Whatever, there was definitely a buzz again.

In Tacoma, the Stars started July on life-support. Despite drawing record crowds while reaching the league finals in 1987, they had been bleeding millions of dollars during their first five seasons, and now MISL, which had helped push the NASL off the cliff four years before, now wavered on the precipice. Less than a week after the World Cup announcement, Tacoma followed three other teams over the brink. Or so it seems.

Less than a month later, a new ownership group emerges, pumping new life into the Stars. They bring back their iconic star, Preki, and rehire Alan Hinton as coach.

With Division I in-state programs relatively under-funded and women’s programs non-existent (Washington State coming online in 1989), Washington’s top players are leading other programs to success. Shannon Higgins propels North Carolina to another NCAA crown and Kasey Keller is among a cast of locals who help Portland reach the men’s finals. Michelle Akers, whose Central Florida is eliminated by UNC in the quarterfinals, is voted national player of the year.

Brent Goulet is the top scorer for the U.S. Olympic team which reaches the Seoul Summer Games, and Keller is joined on the U20 National Team by Chris Henderson and Clint Carnell.

1988: Soccer Pivots Toward the Light

Pacific Lutheran becomes the state’s first women’s collegiate champions, taking the NAIA title, 2-0, over Hardin-Simmons, in Abilene, Texas. Laura Dutt and Sonya Brandt score for the Lutes, and Gail Stenzel gets her 15th shutout. Brandt is named the tournament’s most outstanding player, and PLU’s Colleen Hacker is voted coach of the year.

At 4:21 a.m. Pacific Time, FIFA executive vice president Harry Cavan announces from Zurich that the 1994 World Cup will be coming to the U.S. Morocco and Brazil finish second and third in the balloting. A gathering of soccer community leaders and players gather with local media at Seattle Pacific University, where coach Cliff McCrath predicts soccer will take “center stage” in the nation by 2000. Husky Stadium is among 18 stadia in 16 cities under consideration to host matches.

Michelle Akers, who prepped at Shorecrest and now plays for Central Florida, is named the college player of the year by the NCAA and the National Collegiate Soccer Coaches Association of America. Akers scores 11 goals to help UCF reach the NCAA quarterfinals. Also named to the Division I All-America team were Lori Henry of North Carolina (Shorewood), Colorado College's Kerri Tashiro (Interlake) and Shelley Separovich (Shorecrest), and California's Kathy Ridgewell (Evergreen).

Alan Hinton returns to coach born-again Stars, six months after being dismissed by former owners. His contract of $72,000 is nearly $50,000 less than what he was paid the first time around.

Cruz Azul, featuring five Mexican internationals, drubs Seattle Mitre Eagles, 9-0, in the first leg of the CONCACAF Champions Cup. The Eagles’ flights are delayed and connections missed. Instead of arriving the night before, their bus arrives at the stadium 20 minutes before kickoff, in 100-degree heat.

Following an unsuccessful, last-minute season ticket drive with an objective of 2,000 new sales, the Tacoma Stars fold. They are joined by Chicago and, since the season ended, St. Louis and Minnesota. “The grass-roots support for this team was tremendous,'' said board chairman Lowry Wyatt. ''But the business marketplace was just not able to support this size of an operation.'' 'It's an incredible loss,'' said Nancy Mendoza, a 13-year resident of Tacoma who organized 100 volunteers in an effort to meet the goal of selling 2,000 season tickets. ''The Stars provided the energy that a community needs to move forward. Now we just have to regroup.''

Eagles Draw, Go Out on Aggregate

In the second leg of their Champions Cup series, Seattle Mitre Eagles hold Mexico’s Cruz Azul to a scoreless draw in a steady rain at Memorial Stadium. The Eagles finish with a 15-5 advantage in shots, 8-1 in corner kicks. Attempts by Paul Retchless and Peter Hattrup hit the post and crossbar, respectively. Most of the estimated 500 fans root for Cruz Azul.

A crowd of 12,218 greets the resurrected Tacoma Stars on opening night. The Stars, featuring Schmetzer brothers, Brian, Andy and Walter, lose to Dallas, 6-5, in triple overtime. Peter Ward scores three goals for Tacoma. Walt Schmetzer is stretchered from the field in the fourth quarter with a season-ending knee injury.

Finnair Mavericks end the four-year reign of Cozars as state women’s champions. Bonnie Broughton scores the only goal in the final.

Peppering Portland with a league-record 33 shots, FC Seattle rallies to win in overtime, 3-2, before its largest crowd in four years – 6,427. Peter Hattrup’s goal in the 13th minute of extra time seals it and clinches a playoff berth.

Freshman goalkeeper Kasey Keller of Olympia is among several Washington state players who lead the University of Portland to the NCAA Division I finals in Bloomington, Indiana. The undefeated (21-0-0) Pilots, who also feature WA products Garrett Smith, Jason Russ, Wade Webber, Jim Weber and Robb Sakamoto, are the first Northwest program to advance that far. Portland loses to eventual champion Indiana, 1-0, in the semifinal.

Hinton Out, McAlister In for Stars

With a 17-18 start following a runner-up finish the year before, Tacoma Stars fire Alan Hinton and replace him with Jimmy McAlister, 31. The team, reportedly rife with dissension in the locker room, goes 10-11 the remainder of the regular season.

Brent Goulet of Tacoma scores, but the United States is eliminated from the Olympic Games by a 4-2 loss to the Soviet Union in Taegu, South Korea. The U.S. (0-1-2) needed a win in the final group stage match but fell behind 4-0 before Goulet's screamer from a Ricky Davis assist in the 65th minute.

After not scoring during the regular season, Bob Bruch scores twice in first eight minutes of the WSA championship match as FC Seattle smashes San Jose, 5-0, before 4,321 at Memorial Stadium. It’s the fifth straight win for the Storm, who leave the following day for a five-match tour of England and Scotland.

Tacoma's Brent Goulet scores twice within 16 minutes, lifting the United States to a 4-1 victory over El Salvador in an Olympic soccer Group A qualifying match in Indianapolis. The U.S. had already clinched a berth in the Seoul Games. Goulet leads the team with six goals during qualifying.

Thomas Jefferson reclaims AAA boys title, beating defending champ Cascade on penalties after drawing, 3-3. The Bruins score three times in the final 13 minutes to lead, 3-2, before the Raiders tie in the final minute. "In the history of high school state championships, this game has to be put down in every book," said Jefferson coach Jim Judson.

Stars Staring at the Brink

Tacoma Stars seek $500,000 from new investors by June 30 or they will either fold or suspend operations. The Stars lost $1 million the past season and nearly $9 million since starting in 1983.

Preki, 24, returns to Tacoma, taking a pay cut from his $75,000 salary. Portgual’s Estra De Amdadora had signed him to a three-year contact during the summer but the Stars negotiated his release.

Kent’s Shannon Higgins scores three goals to lead North Carolina to its third straight NCAA title, 4-1 over North Carolina State in Chapel Hill. Higgins, the Tar Heels’ leading scorer with 13 goals and 17 assists, is named the most valuable offensive player after four goals and two assists in the semifinal and final.

Tacoma is officially readmitted to MISL. Jim Manza, Fife restauranteur, heads a new group of investors who negotiate with the City of Tacoma for $400,000 in concession revenue, flexible Tacoma Dome scheduling and a waiver of dome rental fees and staffing charges.

The Northwest Collegiate Soccer Conference votes to adopt a two-division men’s format, with the Olympic Division comprised of the top six teams from 1987 and the Cascade consisting of the remaining six. Following the 1988 season and from thereafter will be promotion and relegation.

John Hamel scores twice in the final 20 minutes at San Jose to clinch the WSA regular season title for FC Seattle, 3-1, and home-field advantage in the championship game.

“
Eddie (Henderson)'s been a revelation to us. 'Everybody expects something exciting to happen when he gets the ball.
— Tommy Jenkins, FC Seattle coach, on the Storm’s celebrated new catalyst
“
It's hard not getting paid, but at least we're going to be around next year.
— Chance Fry, former pro now playing for FC Seattle
“
We played Cruz Azul to a standstill and dominated the game. If not for some unlucky breaks it could have easily been 4-0, Seattle.
— Mike Mikacenic, Seattle Mitre Eagles manager
“
We want to win this thing, even without the luxury of fans. I don't miss all the pressure the coaches exerted on us. I find amateur soccer really refreshing, playing for the joy of the game, not the money.
— Eddie Krueger, former pro now electrical engineer playing for Seattle Mitre Eagles
“
This will help the Storm. They need to play this type of soccer when we come in and when they come out to England. They are the best in the Northwest by quite a ways.
— Bruce Rioch, Middlesbrough manager and former FC Seattle coach
“
We've spent our money on tours instead of salaries.
— Bill Sage, FC Seattle president
“
The trickery of Preki, the strength of Zungul, the cunning of (Erik) Rasmussen. They put on a super show.
— Alan Hinton, Tacoma Stars and MISL West All-Star coach
“
(Peter) Hattrup adds another dimension up front. He is a player who loves a one vs. one situation. I think he could become one of the stars of the league.
— FC Seattle coach Tommy Jenkins
“
There’s a great need for quality soccer fields. So many of the fields are simply dirt and gravel.
— Washington Youth Soccer manager Mike Snodgrass
“
I'm sad for the sport, I'm sad for the players and I'm sad for the community.
— Jimmy McAlister, Tacoma Stars coach after the original ownership group folds the club
“
We don't draw the biggest turnouts with the Storm, but we have a core of real soccer people. It's nice to get out of the carnival atmosphere of indoor soccer. I guess I'm a purist.
— Jeff Stock, who leaves the Tacoma Stars to play with FC Seattle
“
We don't have the deep pockets. We've got to run the team like a business and stay within our budget.
— New Stars part-owner Jim Manza after signing Alan Hinton to coach for far smaller figure than his former salary 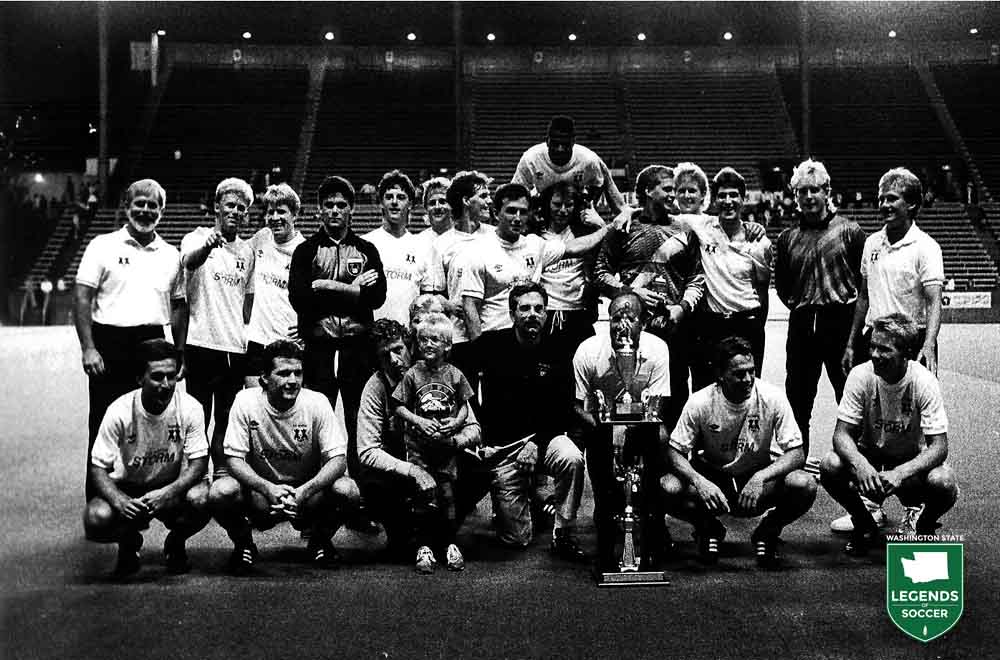 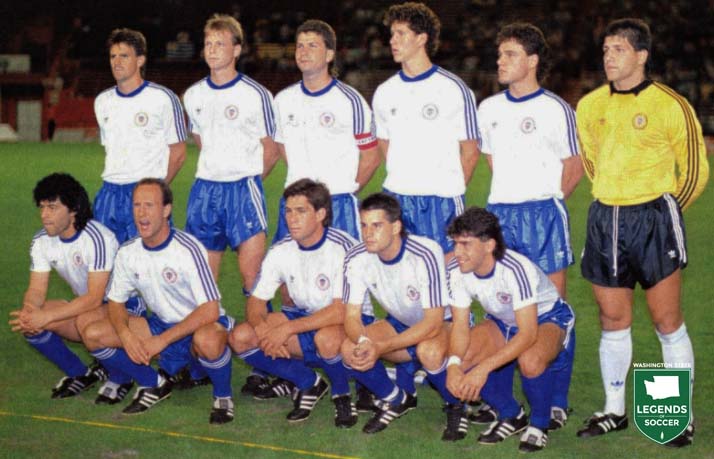 Tacoma's Brent Goulet (back row, second from right), represents the U.S. at the Seoul Summer Games. 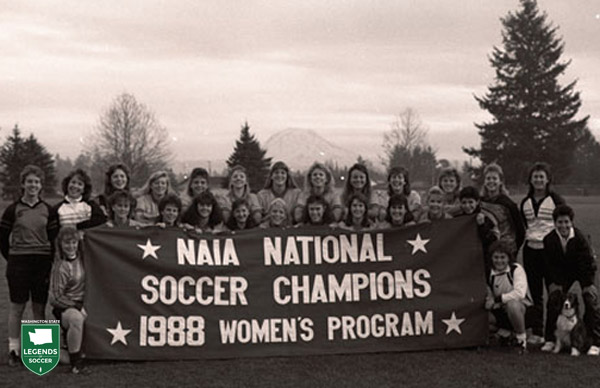 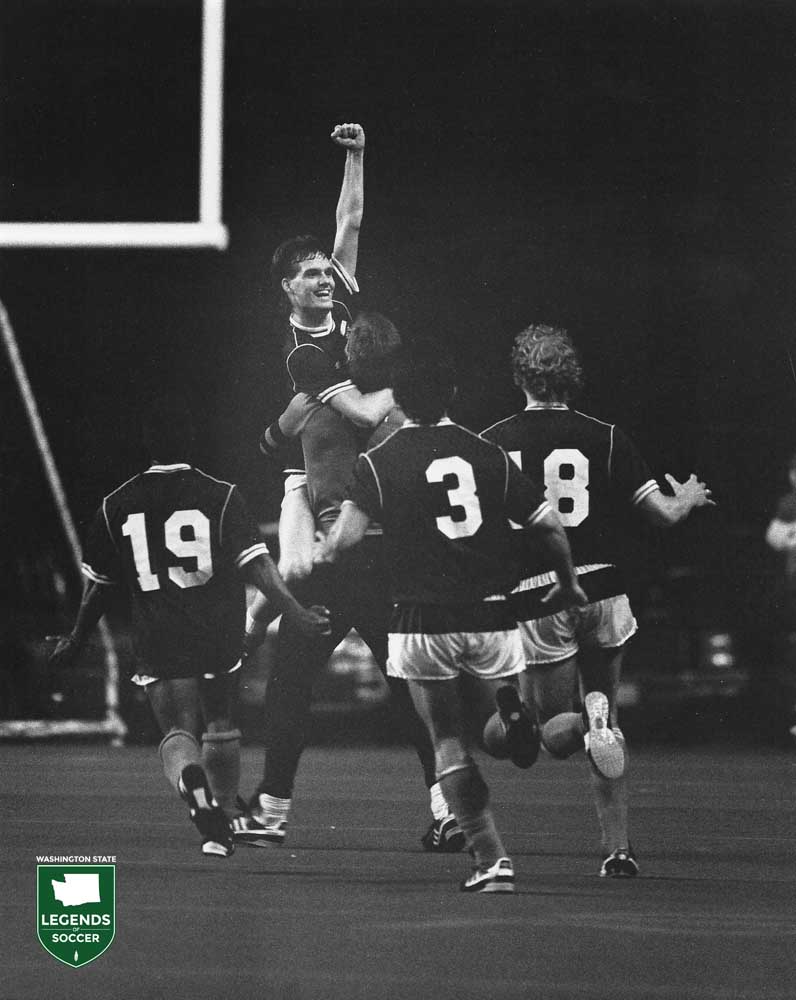