Spanish dictator Francisco Franco dies after 36 years of rule, the Vietnam War ends after 20 years for the U.S. with withdrawal and the fall of Saigon, Jaws becomes the highest grossing film of all-time, and Saturday Night Live debuts on NBC. Microsoft is launched by Seattle natives Bill Gates and Paul Allen, developers of the BASIC program, Governor Dan Evans and First Lady Nancy Evans return after three years to Olympia’s restored and remodeled governor’s mansion, and coach Bill Russell guides the Sonics to their first NBA playoff berth.

Even the most jaded of the game’s disciples must have been awestruck in 1975, as the world was now arriving to acclaim on Puget Sound’s doorstep.

Never before had a full international team come to the Northwest, nor any world-class player, for that matter. In one early summer fortnight that all changed. Mighty Poland, one of the world’s top three teams of the early Seventies, delivered a powerful performance against the U.S. National Team at Memorial Stadium.

Eleven days later, along with national TV cameras and international press, three-time World Cup winner .Pele´ led the New York Cosmos into Seattle to face the Sounders before a record crowd. The Brazilian legend and scorer of over 1,000 career goals was unable to add to that total as the Sounders prevailed, 2-0.

The CBS audience saw a sun-drenched crowd of nearly 18,000 delight in the skills and showmanship of Pele´, however they reserved their loudest cheers for their own lads.

In their second season, the Sounders met a new rival. They faced the Portland Timbers a total of four times in heated matchups, three of them for high stakes before huge crowds. “Sports Illustrated” chronicled America’s newest and hottest soccer rivalry, and KOMO televised the first live local broadcast, the Sounders’ 2-1 overtime playoff loss to the Timbers.

Soccer’s boom time was evident elsewhere around the region, with youth and women’s participation rates skyrocketing, and big crowds coming not only to see professionals but the college game. There were three crowds of 5,000 or more, including 7,000 at Memorial on a frigid November afternoon for Seattle Pacific and the NCAA Division II championship game.

The young players from the area began making names for themselves. Tacoma’s Strikers won the inaugural U.S. Youth Soccer Association U16 championship and another Tacoma team, the U14 Wanderers, became one of the state’s first to travel overseas, playing and training in England.

YEAR IN REVIEW
Play in the Snow? You Bet!

Bremerton’s Peewee Association postpones games due to fresh dumping of snow. Disappointed kids bombarded the league office with calls, so the games were played, with the parents marking out the lines on the snow-covered pitches with sand.

Seattle and Portland meet for the first time at the professional level, with the Sounders getting a penalty kick from Jimmy Gabriel and a penalty save by Barry Watling to claim a 1-nil victory in soggy Civic Stadium.

Greg McKeown of Auburn scores San Francisco's first goal as the Dons win the NCAA championship with a 4-0 blowout of SIU Edwardsville. McKeown, one of only three Americans in the lineup, had also assisted on the USF overtime game-winner versus Brown in the semifinals. Greg's brother Brad is a freshman playing for Washington and Darren, 13, won a state youth skills test during the summer.

I don’t believe the fans are interested only in something stamped ‘Made in America.’ I think they want to see the best players available. The way to upgrade American soccer players is through experience and talent, not through legislation.

Best Is First But Fourth

Sounders coach John Best becomes the first soccer personality nominated for “Post-Intelligencer” Sports Man of the Year award at the Olympic Hotel. Best finishes fourth in the voting, which is topped by bowler Earl Anthony.

A pent-up demand to see the Sounders is obvious as big crowds turn-out for preseason games in various communities. Attendance is 6,614 at Everett Memorial Stadium for Seattle's 1-0 win over L.A. Altogether, over 19,000 watch exhibitions in Everett, Yakima, Burien and Tacoma.

Sounders announce that after two seasons and 17 consecutive sellouts at Memorial Stadium, they are moving to the soon-to-be-completed Kingdome. Awaiting them are modern amenities such as parking, replay screens and protection from the elements, not to mention a larger, uncrowned playing surface. There will be no increase in ticket prices.

Steelers No Match for San Jose

Seattle United Steelers equalize in the 11th minute, through assists from Thor Tollefson and Steve Newman to Bruce Walyor, but the San Jose Portuguese pull away to win the U.S. Challenge Cup West region semifinal, 4-1, at West Seattle Stadium.

Mountlake Terrace claims the first official state high school championship, 3-2, over Bellevue’s Newport, on a Dale Buske volley with 3:22 remaining at Memorial Stadium. The Hawks come from two goals down in the final 12 minutes despite losing an ejected player. Attendance for the WIAA final is 1,247.

Washington clinches the Sounders Cup series by hammering Seattle Pacific, 4-0, in front of a record attendance for college soccer in the state – 5,200 at Husky Stadium. Doug Buck scored a brace on two long-distance strikes and twin brother Denny Buck posts the shutout.

USMNT Makes Itself at Home

For the first time the United States National Team hosts a match in the Pacific Northwest. The USMNT faces Poland, winner of the 1972 Olympic Games and third in the 1974 World Cup. Seattle’s Hank Liotart starts in midfield and both Dave D’Errico and Tim Logush feature in the 4-0 defeat before 13,195.

A national TV audience descends upon Seattle for the first time as newly-signed Pele´ visits with his New York Cosmos. The Sounders bring in additional bleachers, boosting capacity to 17,925 at Memorial Stadium. Hank Liotart scores from the spot and Tommy Baldwin seals the 2-0 win.

The largest crowd in 41 years to see an amateur game in Seattle – 7,000 fans – witnesses Seattle Pacific scoring first but then falling in the NCAA Division II final, 3-1 to Baltimore in windy, near-freezing temperatures. Runner-up for a second year in a row, SPC coach Cliff McCrath said, “I’m proud of all my boys. Remember, a lot of gals had to go to more than two weddings before they caught the bouquet.”

New NASL rules in 1976 stipulate squads reduced from 18 to 16 players and each team must have six North Americans.

Sports Illustrated features the Sounders-Timbers series as it moves to Memorial Stadium and the second meeting in eight days. Barry Powell equalizes in the 90th minute, but Seattle wins it in the 93rd on a golden goal by John Rowlands.

Paul Crossley sets-up three goals and both Tjeert Van't Land and John Rowlands score twice in Seattle's 5-1 spanking of 10-man San Jose at Memorial Stadium. The Sounders spot the visitors an early goal, but Crossley's cross to Rowlands is flicked on to Van't Land for the equalizer. The English winger then sends crosses onto the heads of Rowlands and Van't Land in the 23rd and 49th minutes, respectively, to make it 3-1. Crossley, on loan from Tranmere, has assisted on seven goals and scored two in his first 11 matches.

After breaking his leg 13 months earlier, Pepe Fernandez returns and in his sixth game back comes off the bench to deliver a 95th minute Sounders winner, 2-1, versus Denver.

An intracity competition to be known as Sounders Cup is introduced, with Seattle Pacific, Seattle University and Washington vying for trophy in existing home-and-home regular season series between teams.

Ken Hall’s five saves secure the shutout and Daudi Abe gets the goal that avenges previous year’s championship game defeat to Adelphi as Falcons win semifinal before 5,000 at Memorial Stadium.

Seattle reaches the NASL playoffs for the first time and although owning the third-highest point total in the league is pitted against points leader Portland in the first round. Before 31,523 (including an estimated 2,000 from Puget Sound), John Rowlands gives the visitors a lead early in the second half before Barry Powell answers. A pitch invasion ensues after Tony Betts gets the winner in the 97th minute.

“
We’d be here – even if Pele´ wasn’t.
— Seattle fan’s banner at Memorial Stadium for Brazilian star’s first Seattle visit
“
I never had an opportunity to be terribly physical when I was younger. I never competed in sports or in a team situation with women. I am in better physical condition now than I have been in 10 years.
— Mary Hunter, player in Washington State Women’s Soccer Association
“
We’ve been happy in Memorial. We averaged 16,830 a game. But interest indicates we need a larger place. Memorial has only 12,000 seats between the penalty areas. In the Kingdome, we will have 18,000.
— Jack Daley, Sounders GM
Collegiate Men's Records
Professional All-League
Washington State Youth Cup Winners 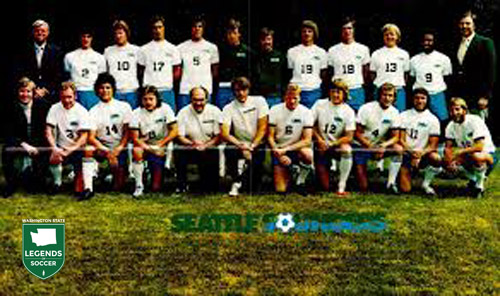 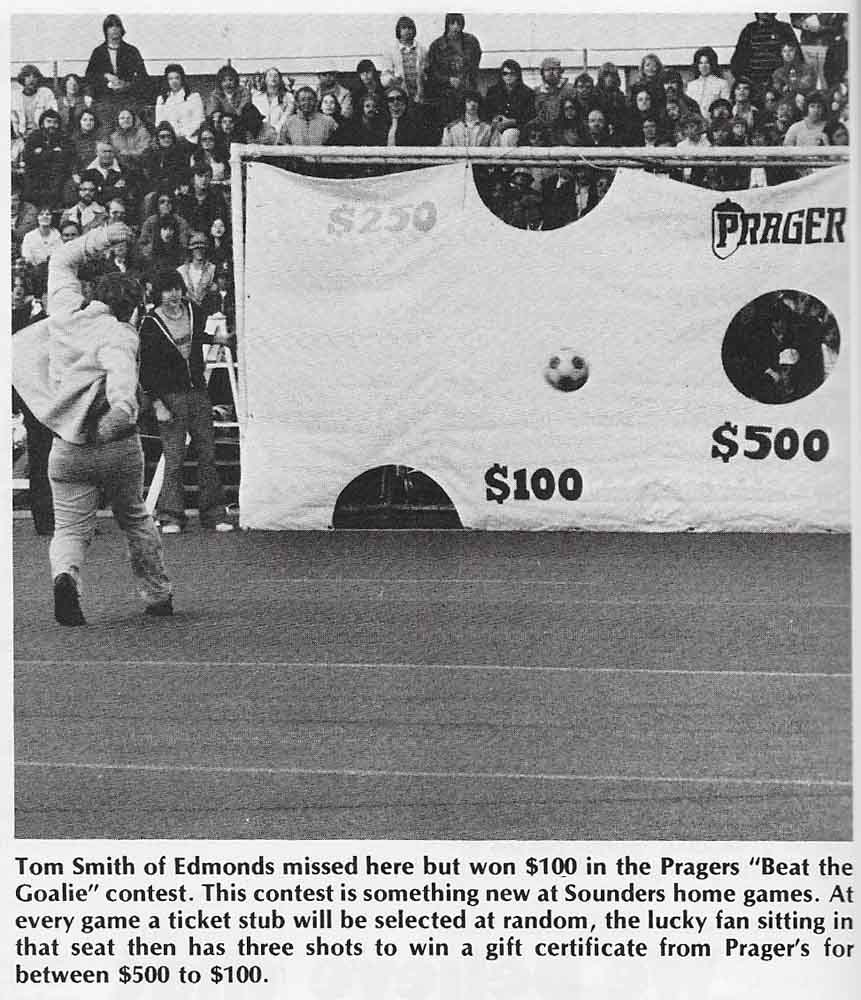 Pele and Mike England during the Cosmos' first Seattle visit. 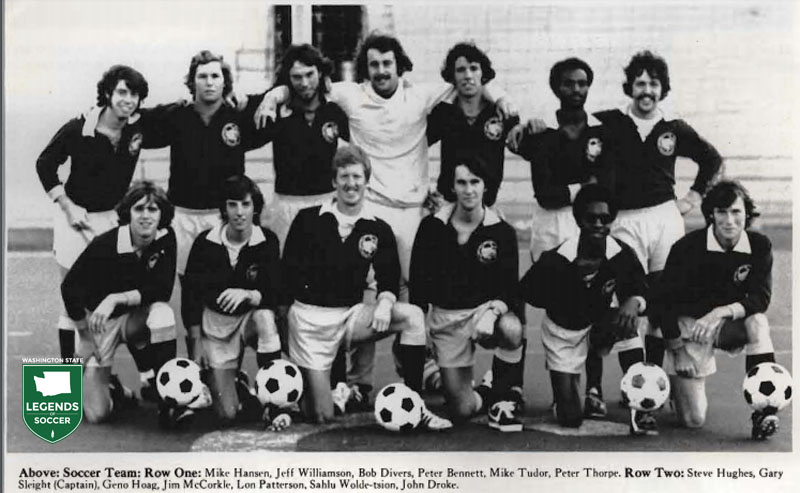 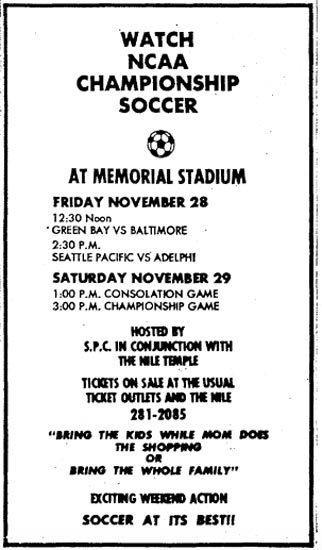 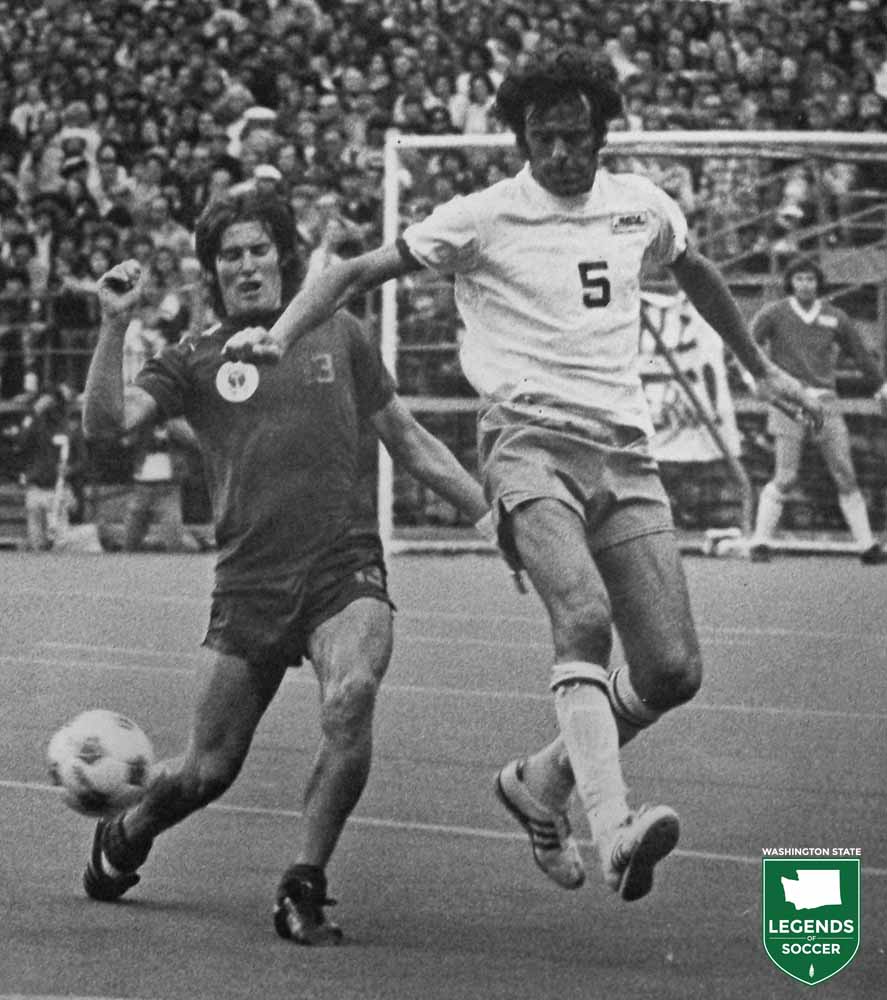 Mike England of Seattle and Chris Dangerfield of the Timbers battle for possession. 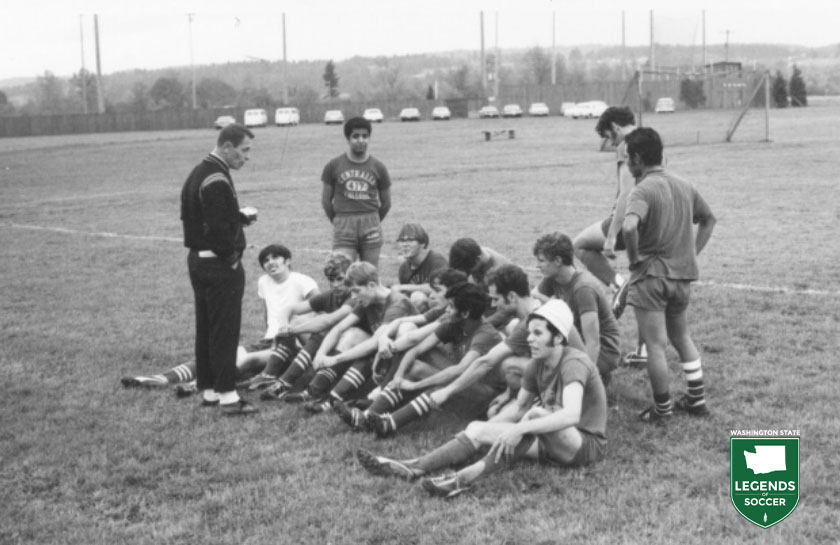 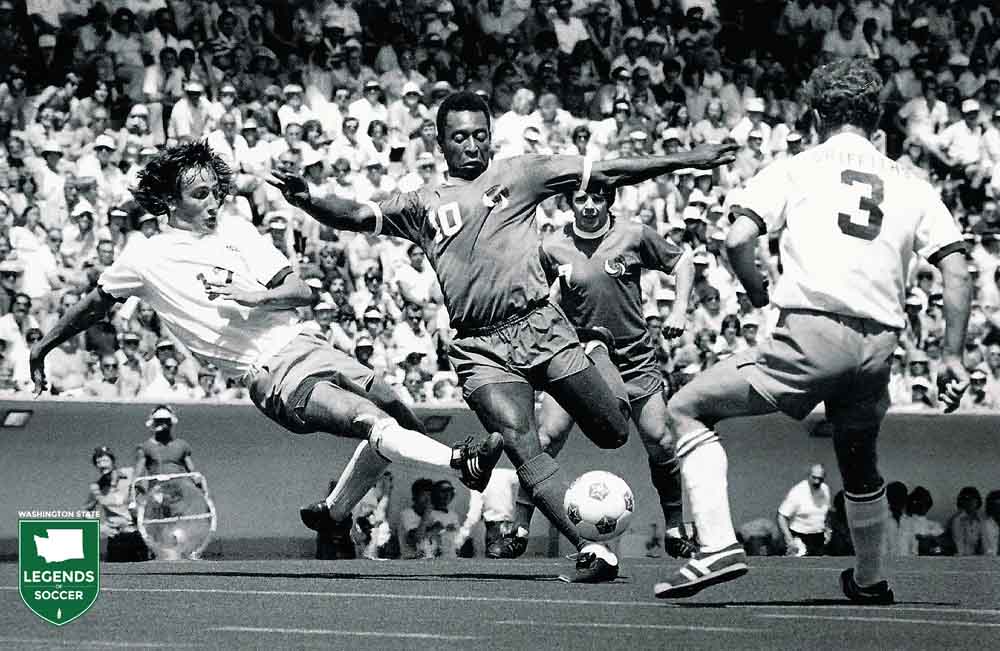 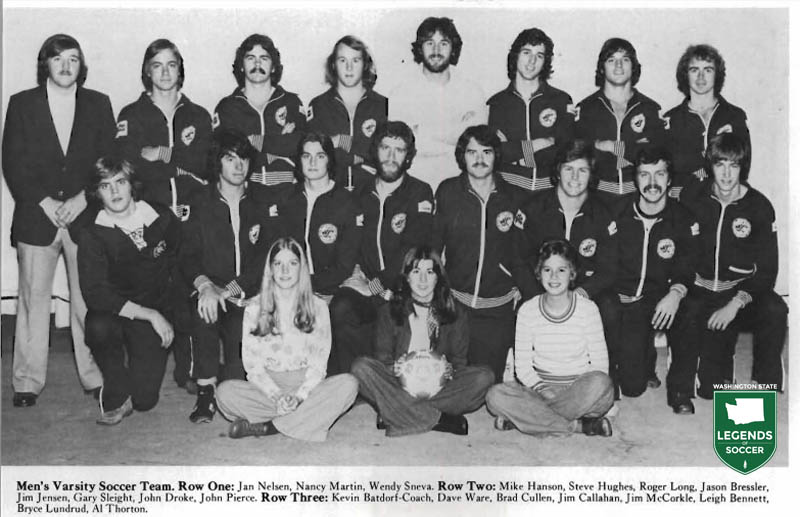 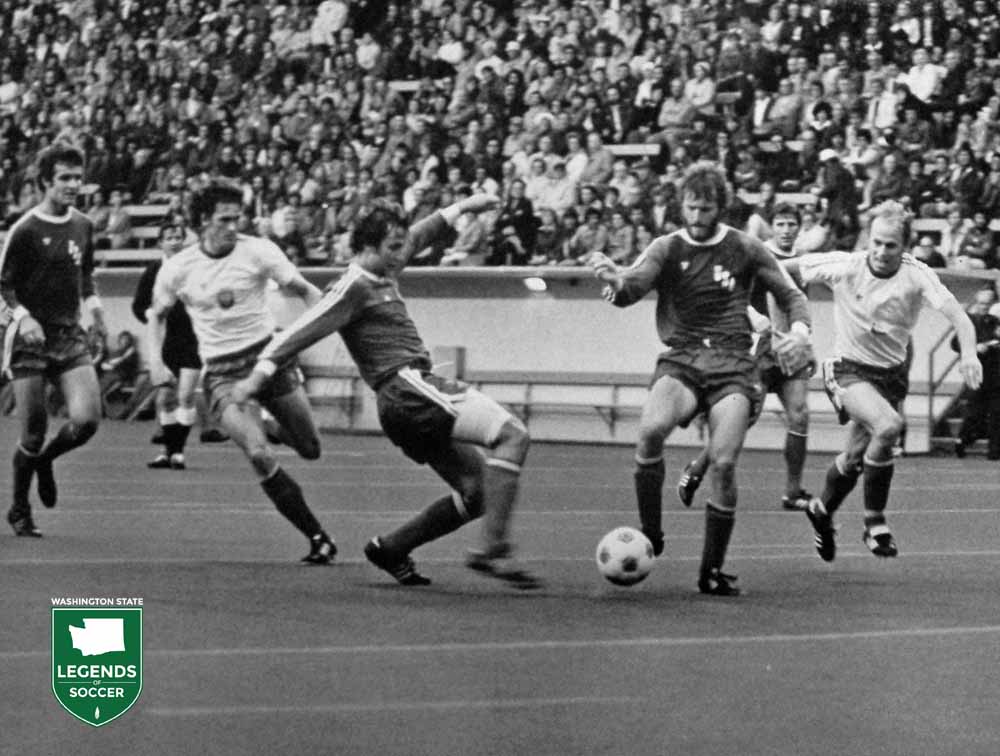 The U.S. National Team finds itself under constant pressure from Poland at Memorial Stadium. 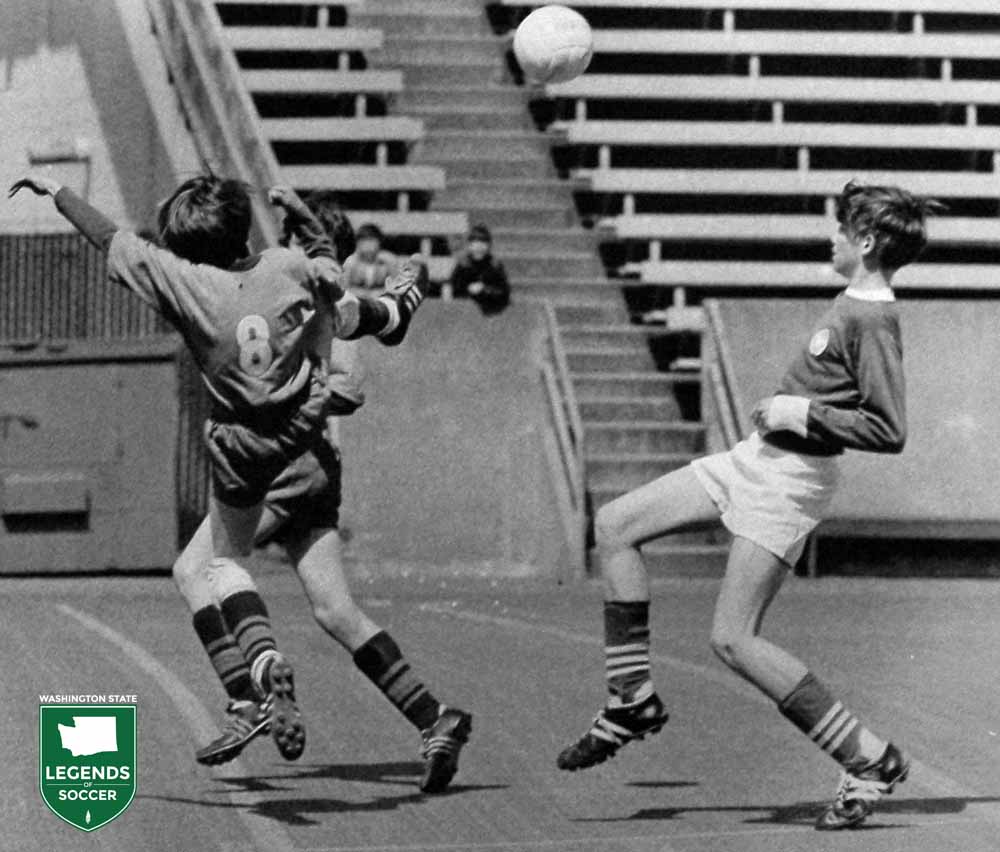 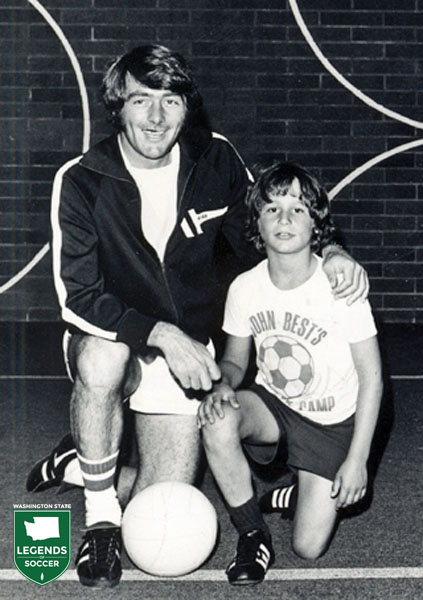 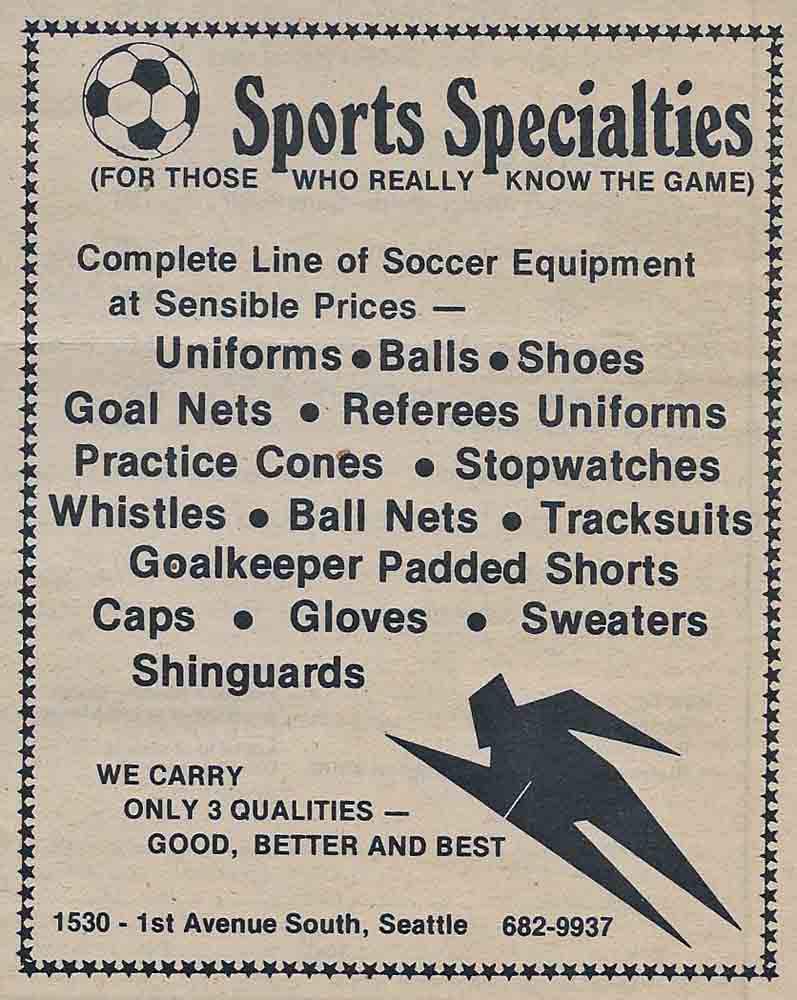 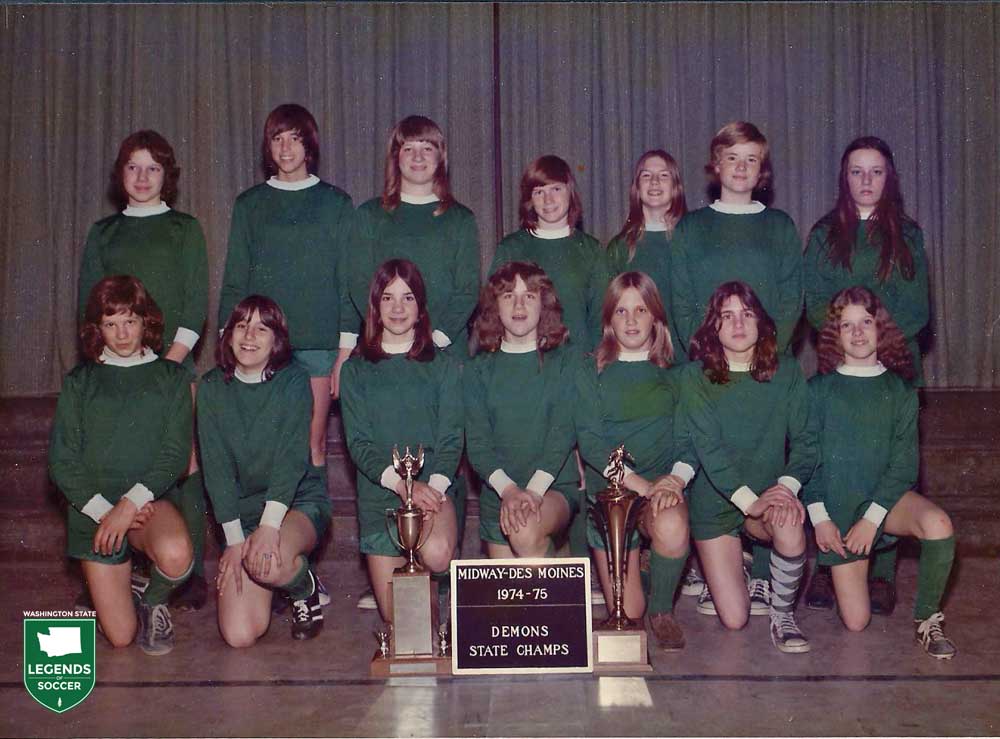 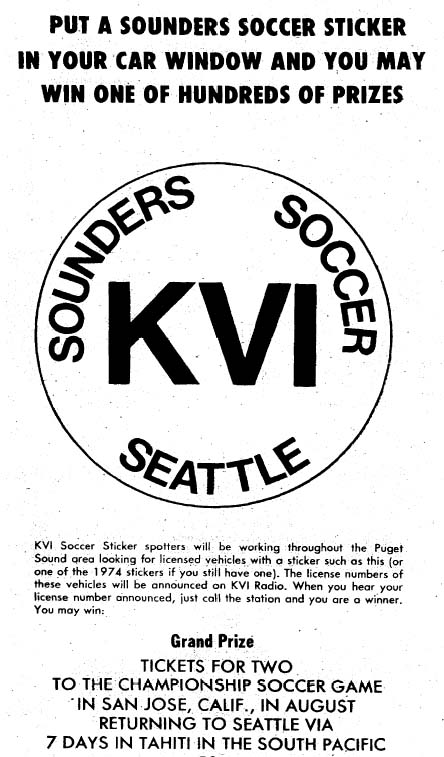 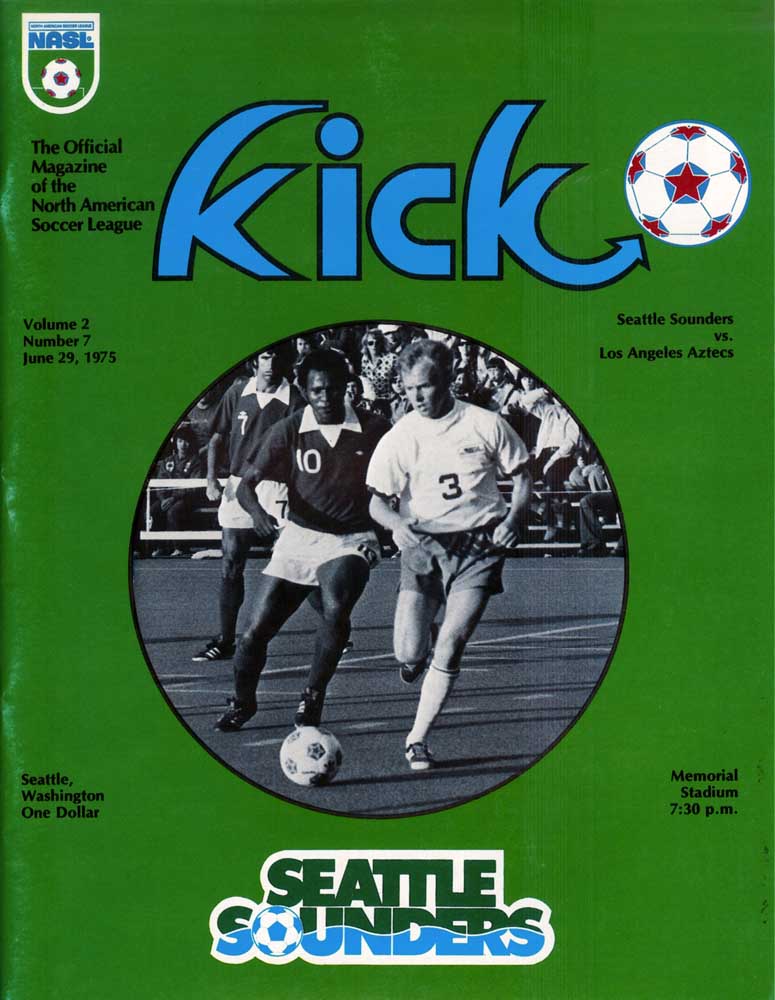 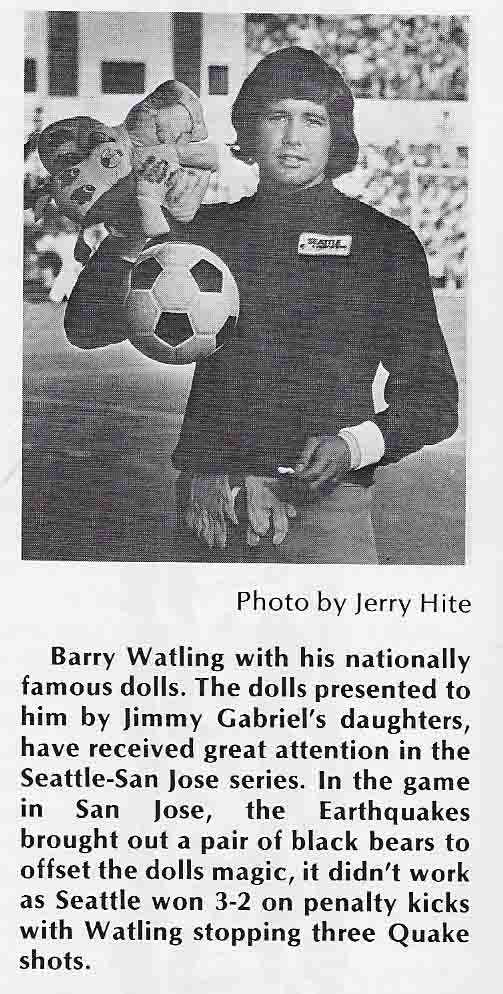 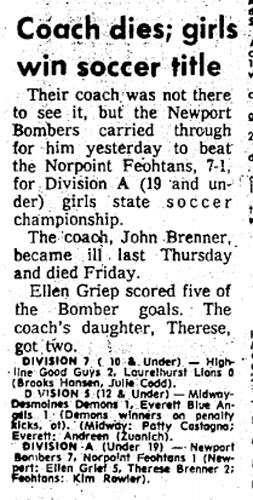 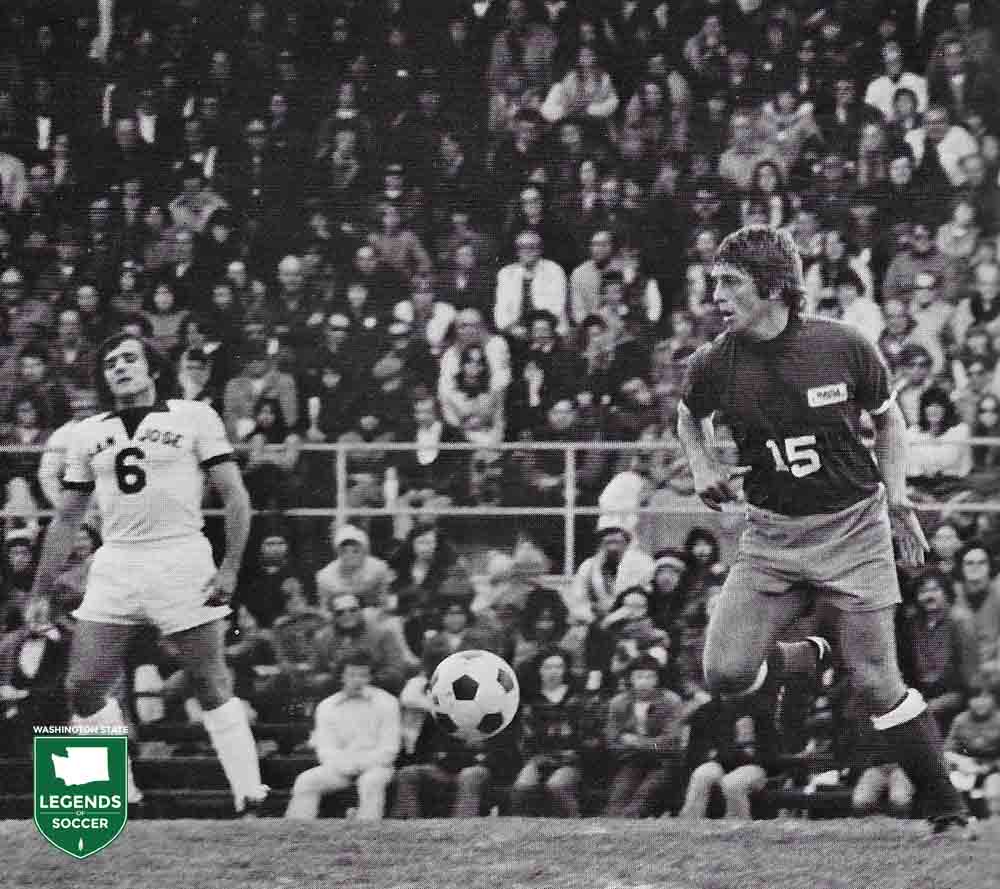 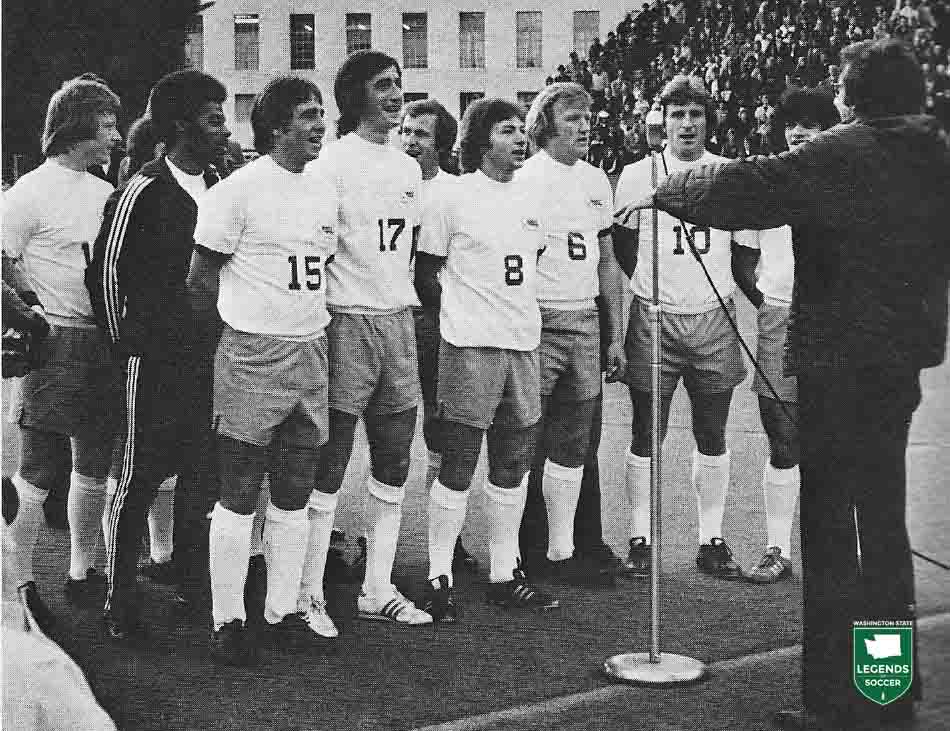 Sounders players gather to sing the Star Spangled Banner before the 1975 home opener. 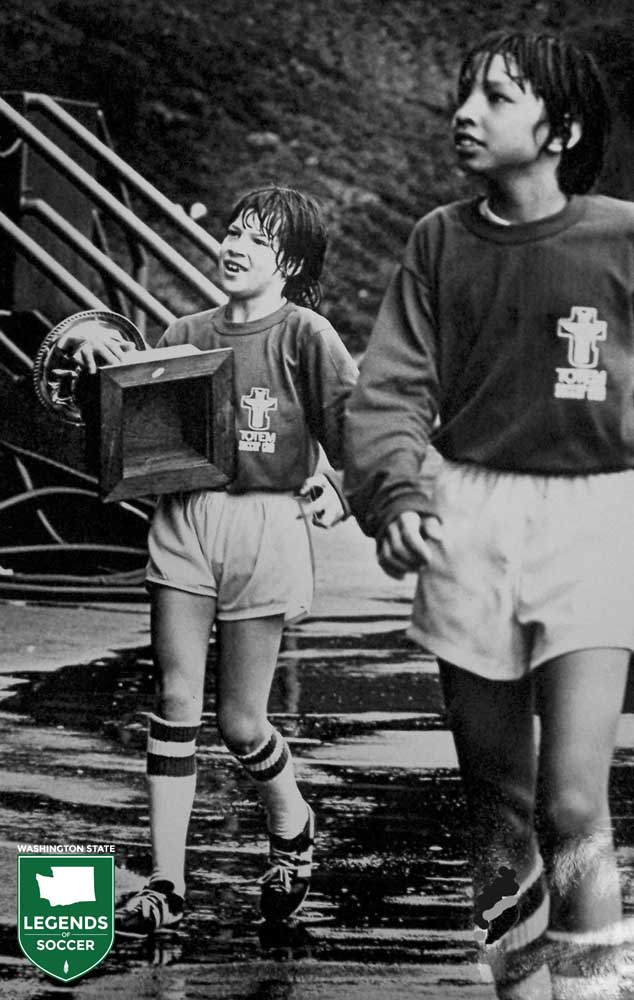 Federal Way's Totem Trappers, winners of the state U11 championship.

One of Washington's first regional champions, the Tacoma Strikers. 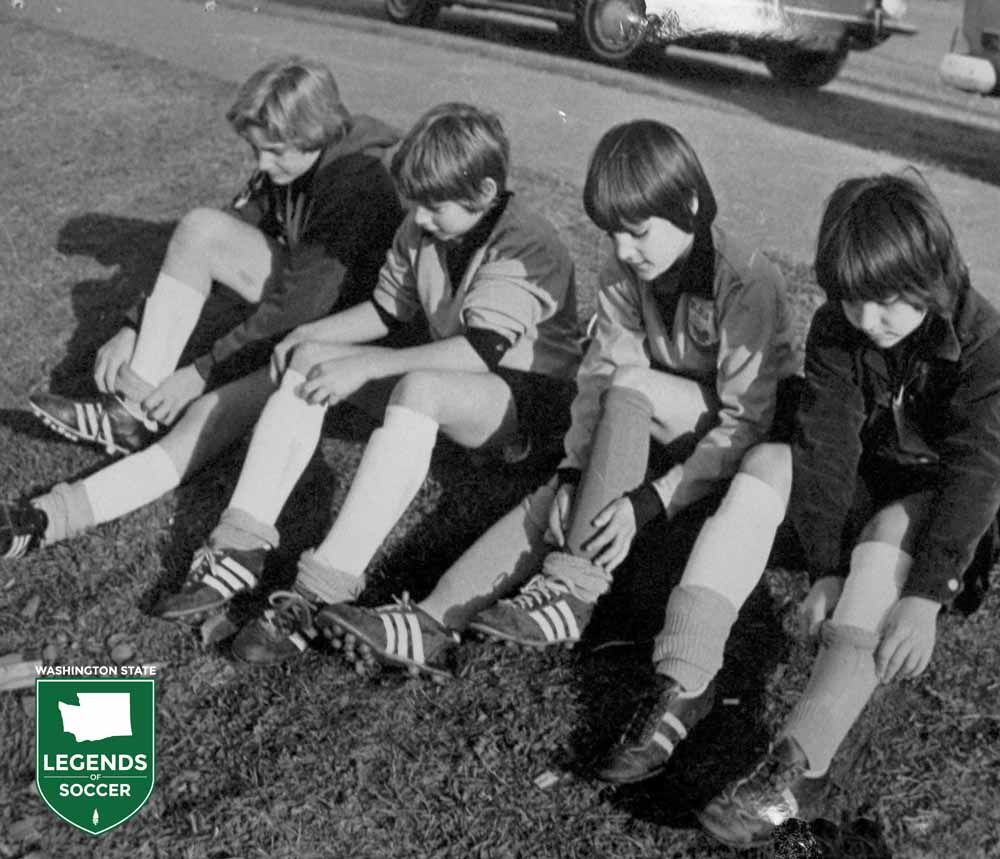 On this Day in History
Sam Hiatt of Newcastle leads the United States out to its first match at the FIFA U20 Women's World Cup. Hiatt, a junior at Stanford, is the captain of the squad, which falls to Japan, 1-0, in Concarneau, France. The U.S. takes third in its group and does not advance.
More from 2018 ›
Les Mueller buries four goals in rival Buchans’ net to keep Hungarians unbeaten (6-0-1) in state first division.
More from 1967 ›
Sounders striker Cam Weaver of Kent is voted USL Rookie of the Year. Weaver finished tied for the league lead in goals (18) and total points (39) with Miami's Romario. He is the club's third rookie of the year in the A-League/USL era, joining Jason Dunn (1994) and Greg Howes (2000).
More from 2006 ›
Former Reign coach Laura Harvey, 39, is named U.S. Under-20 Women's National Team coach. Harvey had spent the past two seasons as Utah Royals head coach. She is about begin the U.S. Soccer Pro License Course and is the second female candidate. On Jan. 9, former Washington State coach Matt Potter is named U23 WNT coach following eight seasons at Oklahoma.
More from 2020 ›
© Washington State Legends 2022.