President John F. Kennedy is assassinated in Dallas, Rev. Dr. Martin Luther King Jr. delivers his "I Have a Dream" speech in Washington, D.C., Beatlemania breaks out across America with the hit "I Want to Hold Your Hand," and zip codes are introduced to the U.S. mail system. Seattle’s Jim Whittaker becomes the first American to summit Mount Everest, Boeing’s 727 takes off on its maiden flight from Renton, the Evergreen Point Floating Bridge opens to traffic across Lake Washington, and the Washington Huskies win six of the last seven games to reach the Rose Bowl.

When Balint Ducz promoted his Hungarians by successfully bidding for a Pacific Coast League franchise, the stakes were raised. The magnificent Magyars left a state league where they were unrivaled against amateurs to a setting in B.C. where the semi-pros around Vancouver and Victoria were already battle-hardened and every bit the equal of Seattle’s best.

While Ducz knew it was going to be a challenge on the field, week in, week out, he was also the first to bet on fan support from throughout Puget Sound. After all, Sunday afternoon matches at Lower Woodland Park were regularly ringed with hundreds and, sometimes, thousands of spectators. There was no gate, no admission and no bleachers, although they might drop a coin or two in the box of Eddie Craggs, who produced the weekly program.

In the PCL, with added costs of travel across the border, including cruises aboard the Princess Marguerite to Victoria, the Hungarians needed to charge admission. Ducz, whose bakery was in Burien, settled in White Center Stadium as the club’s home field. It featured some covered seats and capacity for 2,000. The problem: it was a dozen miles from the region’s soccer epicenter, Woodland Park. Furthermore, once they arrived, they would need to pay for the privilege of watching the finest league north of California and west of St. Louis.

It was not just a change in scenery. Ducz upgraded the roster, adding striker Alex Bogdan from Portland, Tommy Major from Victoria and Zoltan Mako of Denver.

During that first season, the Hungarians would often draw praise and fans – but only on the road. At home in White Center, the turnouts were comparatively paltry. By spring 1963, Ducz was growing increasingly frustrated with the lack of a following. Still, he and the Hungarians stuck with it, returning to the PCL for a second season in 1963-64.

Elsewhere, the University of Washington, in its second season as the state’s only varsity program, opted not to play simultaneously in the state league. Instead, the Huskies scheduled a seven-game slate versus collegiate opposition in British Columbia (varsity) and Oregon (club).

After dominating the state league, Seattle Hungarians become the first American side to join the semi-professional, B.C.-based Pacific Coast League.

Germania Club of state first division offers a public screening of the epic 1960 European Cup final at the German House on Seattle’s Ninth Avenue. For nearly everyone who attends it is the first viewing of the 10-goal classic won by Real Madrid, 7-3 over Eintracht Frankfurt, before 127,00 at Glasgow’s Hampden Park.

College Only for Huskies

Loyal Realty club president Einar Larson, 58, suffers a fatal heart attack while watching his Vikings in a Knockout Cup match at Lower Woodland. Larson, a small newspaper publisher and advertising executive during his career, was prominent in Swedish community affairs and was trying to bring a Swedish club to play in Seattle. Born in Korsnas, Sweden, he immigrated to Spokane in 1923 and moved on to Seattle in 1942.

The biggest crowd of the season sees Germania become the first German team to win a state league trophy with a 3-2 comeback win over Loyal Realty to clinch the second half crown at Lower Woodland. The Vikings (6-2-0) cancel out Bert Lerch's opener with early second period goals by Fred Kristianson and Matti Niemela. Walter Schmetzer knots it and Heinz Ritter fires home from 25 yards with two minutes left for the Germania (7-1-0) winner.

After running roughshod over the state league for two seasons, Seattle Hungarians’ first season in the Pacific Coast League is only good enough for sixth (5-11-4). Hungarians are the only U.S. entry in the eight-team PCL.

Les Fabri opens the scoring in the 35th minute and Mike Kuczi’s 30-yard blast midway through the second half seals it as the PCL Hungarians avert a Germania upset in the Knockout Cup final, 2-0. Willi Lindner makes a diving stop of Germania's Peter DiValentine before Fabri strikes on a header from Tommy Major.

A Pacific Coast League between the Hungarians and Victoria United is abandoned with three minutes remaining due to a melee. Police responded and escorted the officials from the field after the referee was allegedly attacked by a Seattle player while a linesman was reportedly struck by a fan. Victoria had been leading, 4-1, at the time play was halted. One member of the Hungarians was later suspended indefinitely and charged with assault.

Behind the two goals of Fred Kristianson, first-half winners Loyal Realty beat second-half victors Germania, 3-0, for the first division championship and the Puget Sound Power Cup. Reidar Olson completes the scoring in the second half.

Richmond Highland Warriors win the second half title and with it the state junior league championship by drawing, 3-3, with Wallingford Green. Richmond also won the first half.

Loyal Realty follows its state league title with a win over the surprising University of Washington A team in the Five-a-Side final at West Seattle Stadium. Matti Niemela scores the final's only goal. Twenty teams played 19 15-minute games. Washington’s team consisted of young players from Turkey, England, Israel, Spain and Mexico, with Dick Aguirre, a UW football star, being the latter.

Play is postponed throughout the state league and the Hungarians’ PCL match is also called off as the nation mourns the assassination of President Kennedy in Dallas two days earlier.

Bill Miller’s three goals in a 4-1 second leg away victory are the difference as Seattle’s CYO All-Stars retain the Oldershaw Cup in the annual series with British Columbia’s North Shore. The aggregate score is 6-1. Seattle had won the home leg, 2-0, two weeks earlier on scores from Miller and Mike Langdon.

Fort Lewis withdraws from state league’s first division after seven games. The Soldiers are unable to field a team following mass reassignments and deployment of personnel, many of them part of escalating U.S. involvement in Vietnam. The sudden subtraction prompts league officials to suggest that Black Watch Thistle move up from the second flight, however they refuse.

Finally, A Field of Their Own

Seattle Parks Department approves configuration for Interbay sports facility. The $100,000 project features the city’s first dedicated soccer field. Other sports will not be allowed on the pitch, to be built upon the northern portion of the old sanitary landfill.

Hungarians Fit to be Tied

Mike Kuczi’s last-gasp equalizer gives the Seattle Hungarians their fifth draw in 10 games to open the Pacific Coast League campaign. They Magyars catch North Shore, 1-1, at White Center to stay in fourth place (2-3-5). Tommy Major’s penalty kick midway through the second half hits the post. Steve Furjesi, fouled prior to the penalty, crosses to Kuczi to knock home from 5 yards.

“
It is my money I’m spending, and this is really no business of certain individuals who have been so ready to criticize. It’s help – such as a playfield, players, and spectators – we need instead of the criticism we have been getting.
— Balint Ducz, Hungarians sponsor, on criticism of drawing poorly while playing in Pacific Coast League
“
We are not interested in seeing Hungarian sponsor Balint Ducz lose money on this soccer venture and having to play the games at White Center can only result in a loss. The Seattle club must get a centrally located enclosed park which can be turned into a regulation sized soccer field and which is in easy reach for the soccer fan. We want Seattle in our league, but they must have a satisfactory field.
— PCL commissioner Bill Findler, after the Hungarians lose $5,500 in their first season
“
Ironically, the Magyars are an attraction when they play in Vancouver where their style of soccer is greeted enthusiastically by the Italian and Hungarian communities in that city.
— Seattle Post-Intelligencer’s Ron Tullis on Hungarians’ attendance woes, which may force the club to withdraw from the PCL
“
The game can be played from ages 6 to 40 there are 11 men on a side, in constant motion rules are simple equipment is inexpensive and can last for 10 years if cared for properly.
— Stanford professor Leo Weinstein on why Europeans appear to be in better physical condition than Americans
1962-63 Hungarians PCL Results 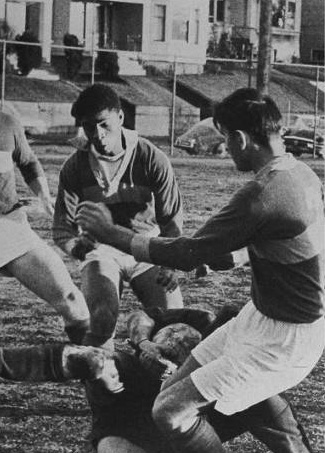 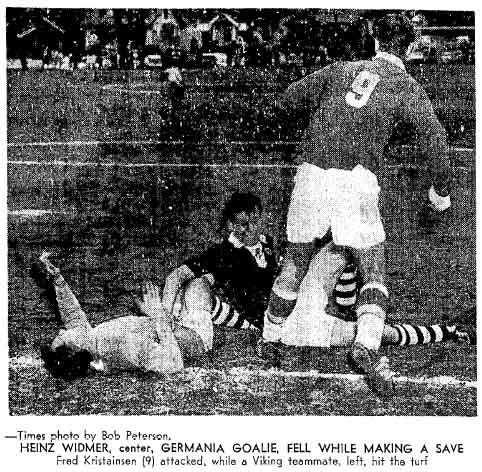 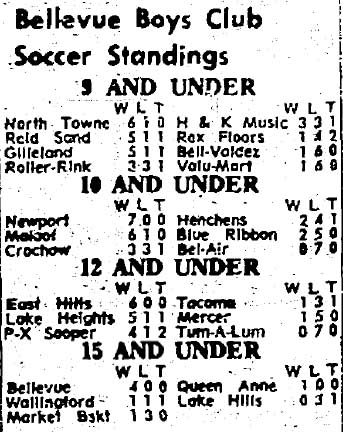 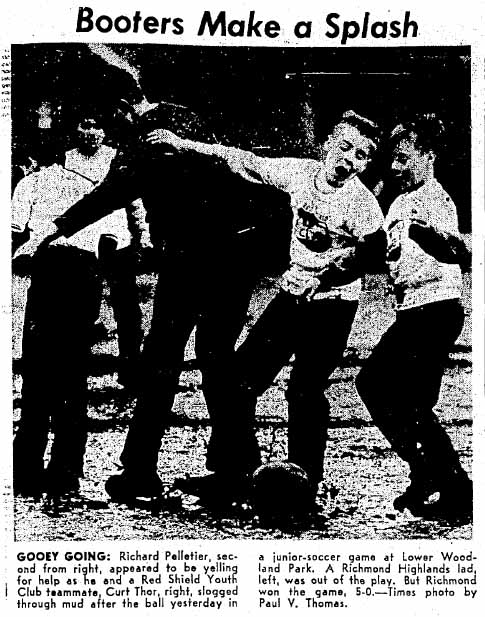 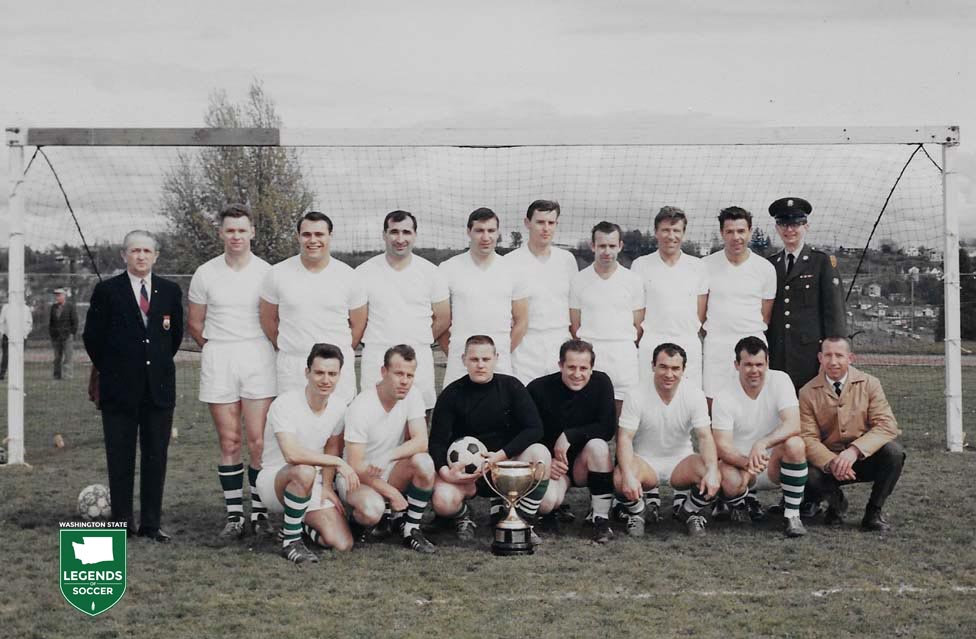 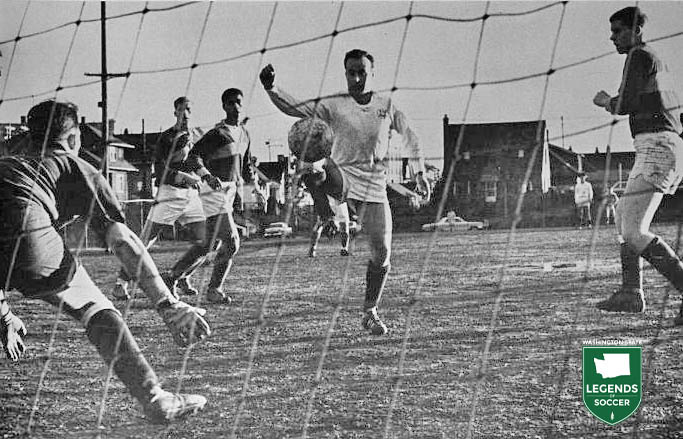 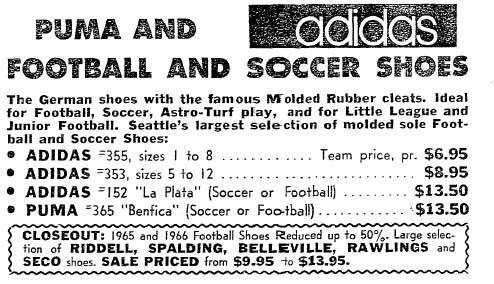 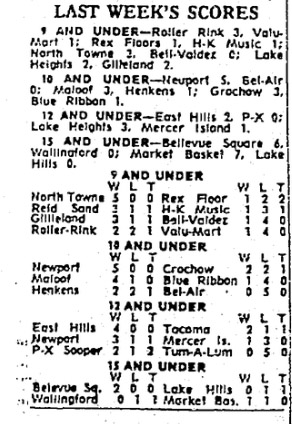 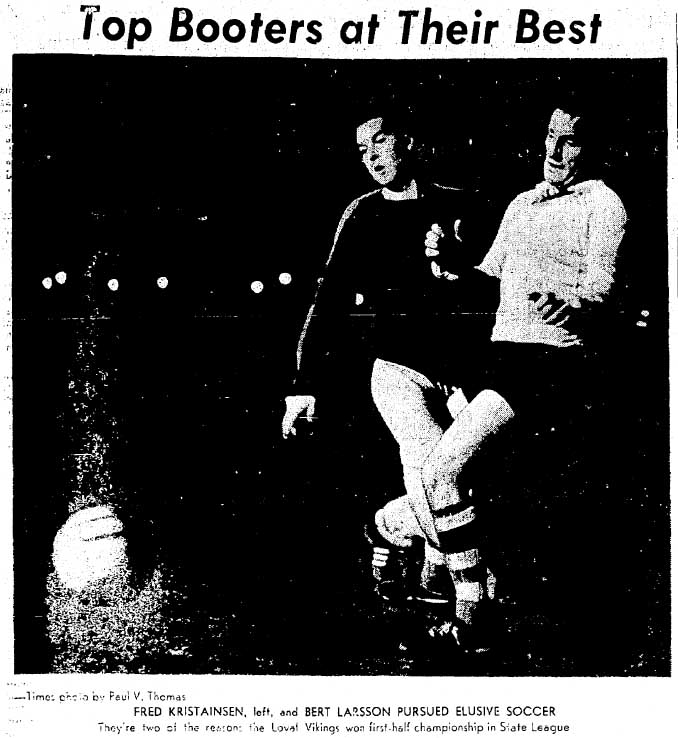 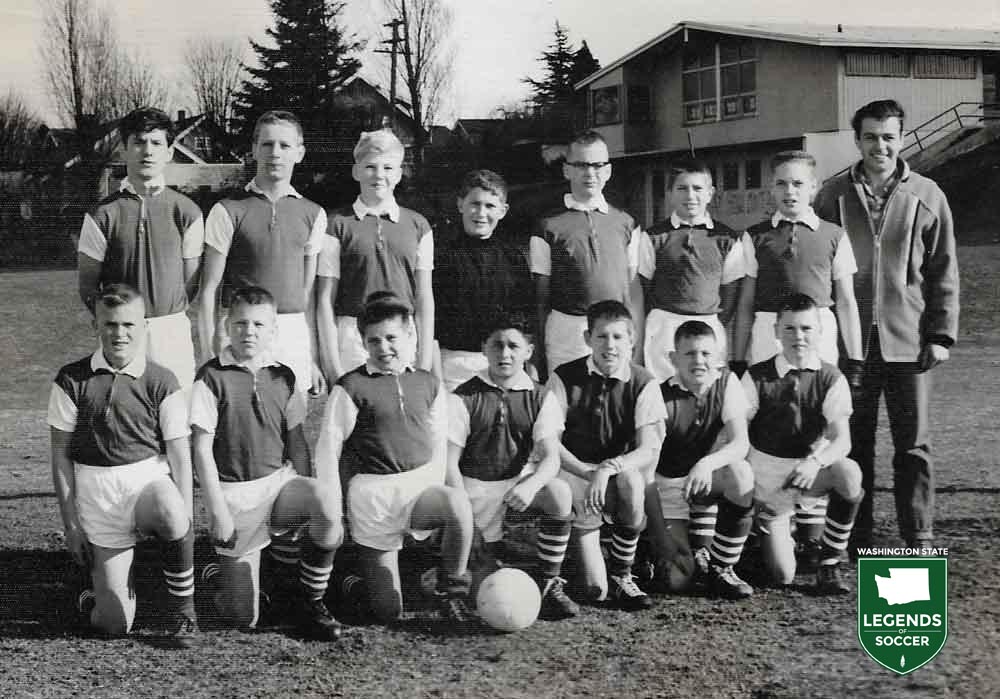 On this Day in History
Kasey Keller keeps a clean sheet as Leicester City claim their first cup in 33 years, defeating Middlesbrough, 1-0, in extra time of League Cup final replay at Hillsborough. Keller, in his first season with the Foxes, denies Boro’s Emerson late on to preserve result. The two sides initially played to a 1-1 draw at Wembley 10 days earlier, with Leicester's Emile Heskey forcing the replay by scoring in 118th minute.
More from 1997 ›
Central Florida honors Michelle Akers-Stahl by retiring her No. 10 jersey. Akers-Stahl completed her career (1984-88) as the Knights' career scoring (52) and assists (30) leader. Ten months later, she is named interim coach while UCF seeks to replace Bill Barker.
More from 1992 ›
Four new grass fields at Plantes Ferry Soccer Complex are opened for the Spokane Cup men's tournament. The tournament, which has been ongoing for 31 years, has typically been held at Franklin or Underhill parks. Half of the 12-team field hails from greater Spokane. The Plantes Ferry fields were seeded in 1998 and unused until now. Eight more fields and three softball fields are scheduled to be built in the future.
More from 1999 ›
It's a sudden change at the top for Seattle Reign, with Laura Harvey resigning as coach and GM and being replaced by ex-Kansas City coach Vlatko Andonovski, 41, on the same day. Harvey, 37, had led the Reign since its inception, taking the team to the best record in NWSL in 2014 and runner-up finishes in 2014 and '15. Andonovski's FCKC had beaten Seattle in both finals. Harvey moves to Utah, where the Kansas City shifted following the season.
More from 2017 ›
© Washington State Legends 2022.