A United Nations coalition force repels Iraq from its invasion of Kuwait six months earlier, the USSR begins dismantling after several former Soviet republics independence, Queen’s Freddie Mercury succumbs to AIDS, and the Internet is made available for unrestricted commercial use, with over 1 million computers signing-on. In Washington, Nirvana’s Nevermind effectively starts the Grunge era with an album release party at Seattle’s Rebar, Seattle Art Museum opens its downtown location, Winslow changes its name to Bainbridge Island, and the Washington Huskies go 11-0 during the regular season en route to a shared national championship.

Integral to the formative phase of the U.S. National Team program, Washington’s women are, if anything, more prominent when the first phase culminates in a world championship. Four young women from Puget Sound wore the national colors that November night in Canton, China, and then celebrated that victory into the wee hours.

It was a struggle that only a close circle could possibly appreciate. The players were compensated by a mere pittance while sacrificing their day job careers. Only pockets of U.S. media share news of that first FIFA Women’s World Cup, and the team returns home to precious little fanfare.

But three weeks later, a local homecoming is held for Michelle Akers, Amy Allmann, Lori Henry and Shannon Higgins – and hundreds of adoring fans squeezed in shoulder to shoulder. For all intents and purposes, it’s the retirement party for the latter three. Akers, whose two goals in the final and 10 altogether lift her into some limelight, will play another nine years.

It is the beginning, and often those whose sweat and toil take place in breaking new ground are not around to bathe in the applause when the capstone is applied.

Each of Washington’s World Cup Four had been forced to go elsewhere in the Eighties to play for college scholarships. By 1991, that changes. Both the University of Washington and Gonzaga begin play, joining Washington State among Division I. It takes the Huskies only a couple weeks to find their way into the national rankings. Statewide, there are now a total of 11 varsity collegiate programs. Those who elect to stay home once more prove quite formidable.

Pacific Lutheran continues to be one of the most powerful programs in the state, at any level, and once again rules NAIA. The Lutes of Colleen Hacker win their third national title in four seasons while playing in four straight finals (they also tied both Washington and Portland).

Michelle Akers scores a record five goals in the first 47 minutes and the U.S. routs Chinese Taipei, 7-0, in the quarterfinals in Foshan. Akers’ masterpiece features two rebounds, a free kick, a penalty and a header.

Tom Fuegmann of Seattle University scores a pair of goals and Jason Dunn, a transfer from Washington to SPU, gets the third as the Washington state U23 team wins the George F. Donnelly Cup, 3-2, over host New Jersey in Newark. Fuegmann, Jason Farrell and James Dunn all receive invitations to the Olympic Sports Festival. Washington was unbeaten (12-0-2) during its run through regionals and nationals.

After losing their fourth straight, 7-6 in overtime at Dallas, the Tacoma Stars head into 1992 with a 5-10 record, with five of those losses by one goal, three in overtime.

Falcons Go Out of NCAA on PKs

Third-ranked Seattle Pacific draws 3-3 with Cal Poly SLO but falls 3-1 on penalties in NCAA quarterfinal that is later overturned as forfeit.

The irony is that game (against UW) counts for nothing, not in the league, not in the NAIA. But it means everything to our players, that they can play with big teams. They're shaking the image of the past.

USWNT opens play at first FIFA Women's World Cup in Panyu, China, defeating Sweden, 3-2. Washington natives Shannon Higgins and Michelle Akers are in the starting XI, and Higgins clears a Swede shot off the line. Thrilling experience, she says, "My heart was about to leap out of my body."

Aviation West of Highline SA soars to a fourth state cup in five years by going out winners of the boys U19 tournament. Three members of the team – Ben Erickson, Joey Mancuso and Rob Lebelle – are chosen for the U20 National Team.

Top-ranked Seattle Pacific, getting early goals from Jason Dunn and Jason Farrell, wins its eighth straight – all by Marcus Hahnemann shutout – over Whitworth, 4-0, at Newport High School in Bellevue.

Michelle Akers, Amy Allmann, Lori Henry and Shannon Higgins return to Seattle and a reception with hundreds of local fans, including Governor Booth Gardner, at Mercer Island Community Center. Allmann, Henry and Higgins all announce they are retiring. They and Akers, regarded as the best female player in the world, earned only $1,000 per month from U.S. Soccer.

Chris Henderson announces he will sign with the USMNT and forego his final two years at UCLA. Henderson has started the last 16 games for the U.S. He was the fourth-youngest player on the 1990 World Cup team.

Two weeks into their inaugural season, the Washington Huskies receive a No. 20 national ranking after drawing, 1-1, at No. 16 Portland.

Forty-eight hours after being blasted, 11-2, in San Diego, the Tacoma Stars respond by beating the Sockers, 10-2, behind Bill Crook’s first career hat trick. The win clinches the West's third and final playoff berth.

Leagues are becoming increasingly popular in eastern Washington, from Tri-Cities to Wenatchee. Migrant farm workers from Mexico and Central America flock to teams. Combined, the Yakima and Lower Valley leagues have about 30 teams and 600 players since starting in mid-Eighties.

Michelle Akers, 25 and 1984 Shorecrest graduate, scores both goals in 2-1 victory over Norway in first FIFA Women’s World Cup final before 59,000 in Canton. Akers intercepts a backpass for the winner into an empty net. She finishes with 10 goals in six games to lead the tournament. Shannon Higgins of Kent assists on the first U.S. goal. Winners will split $50,000.

“
We have the support of the university, but the details are significant and still must be worked out. It's a bit of a burnout from the Goodwill Games, but this is 1994 we are talking about, not 1992.
— Gov. Booth Gardner, optimistic that Seattle will be a World Cup site despite lagging support from the community and University of Washington
“
I used to go to Sounder games and thought Dave Gillett was the most handsome guy in the world. I've got a picture of just his butt in my scrapbook.
— Michelle Akers on her soccer idol as a Seattle area youth
“
I think 10 years from now we will look back on a win here and see it as a beginning,
— Michelle Akers after only a handful of people greet team upon its arrival home from a victorious World Cup in China.
“
What's most impressive is the variety of ways she can beat a defender. She's so physical she just overpowers a smaller defender. If they put a bigger player on her she has the quickness to just blow past her.
— USWNT coach Anson Dorrance on Michelle Akers
“
It is one of the best sites we have seen. I think it would fit well into our program.
— FIFA's Guido Tognoni after inspecting Husky Stadium as a potential 1994 World Cup site
“
After we won the World Cup, I didn't expect America to realize what we had done. The people who were closest to me, the ones who knew how hard I'd worked and how much I'd sacrificed, were the ones who were really disappointed. All I was hoping for was a bigger glimmer in the eyes of Americans when they looked at soccer.
— Michelle Akers at a Mercer Island reception for the four Washington players on the USWNT squad
“
We had some real momentum going. Our program and our fan base (3,500) had been growing year to year. I feel badly about missing a year, but I think in the long run what we're doing is the best thing.
— Bud Greer, FC Seattle owner, after deciding to go dormant for 1991
“
Our potential is unlimited. We can easily be national champions - not this year, but it's a very realistic goal in the future.
— Washington’s Jeannine Jensen, a transfer from PLU and member of the Huskies’ first-year varsity
“
They were complaining that we had some of the best female soccer talent in the country, and the UW didn't have a (varsity) soccer team.
— Ken Hutchinson, state representative and proponent of providing women athletes more opportunities to play varsity sports
Collegiate Men's Records
Collegiate Women's Records
State Youth Recreational Cup Winners
Washington State Youth Champions
WIAA Championship Games 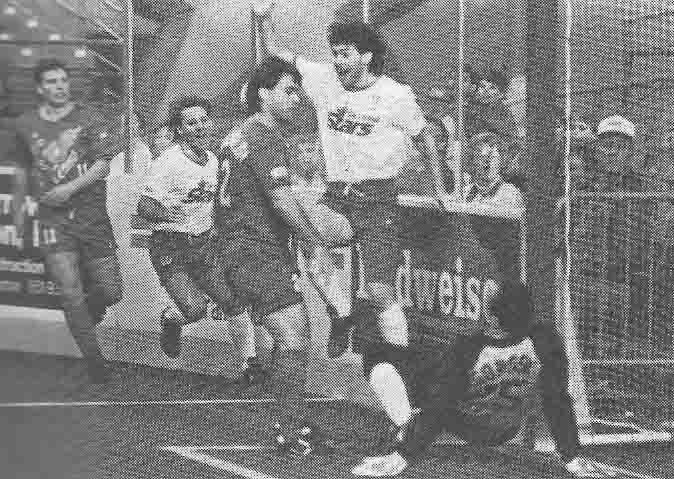 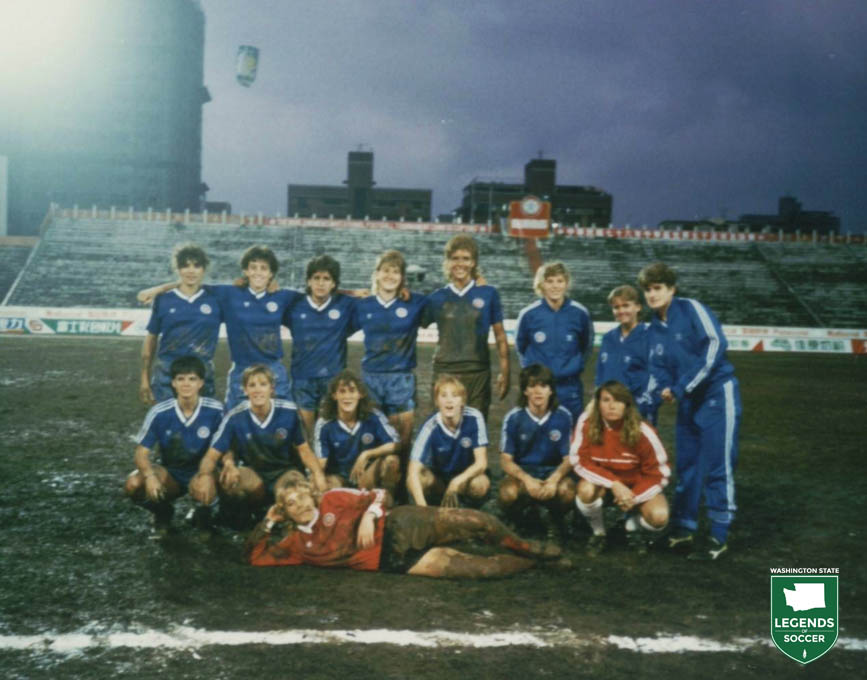 No better time to snap a photo than after a muddy training session in China for the USWNT. 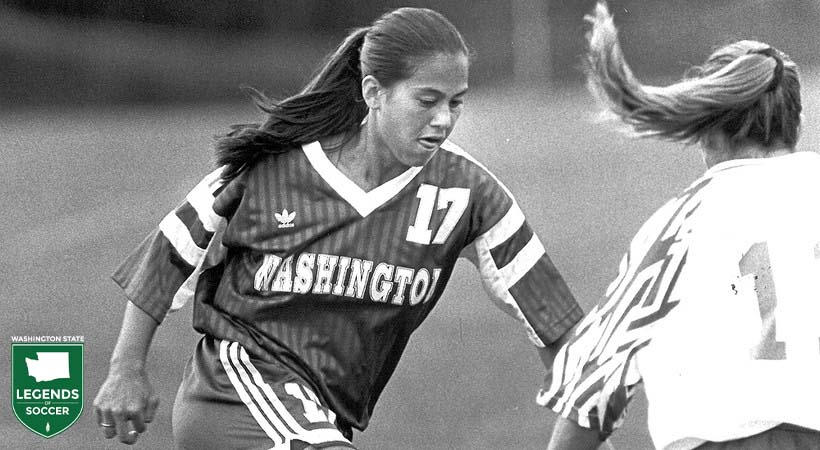 Melanie Jackson is one of the original Washington women's varsity members. 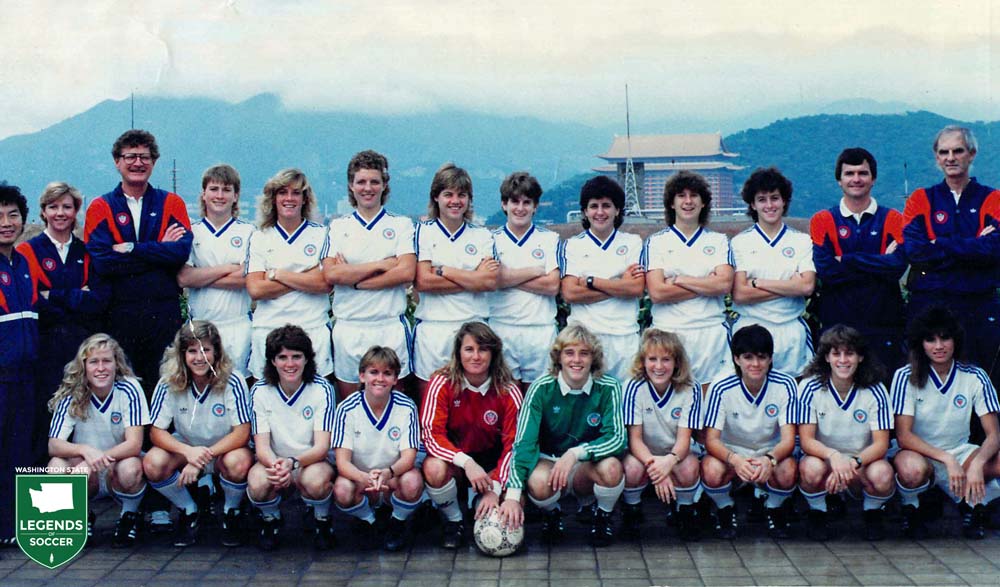 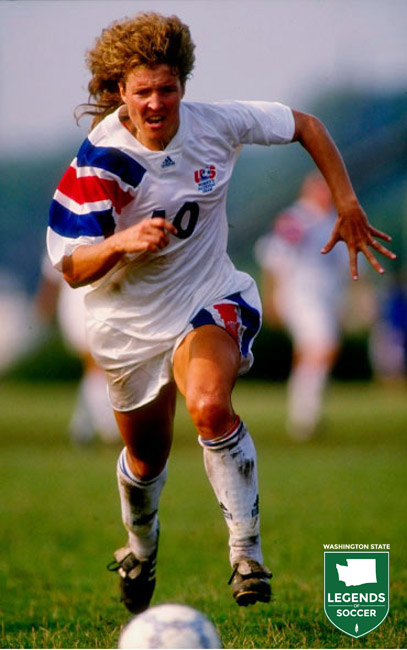 Michelle Akers, winner of FIFA's Silver Ball and Golden Shoe at the Women's World Cup, plus 1991 U.S. Soccer Female Athlete of the Year. 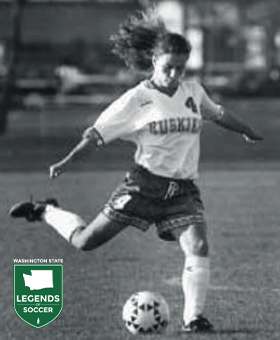 Rhonda Klein is part of the first Washington women's team. 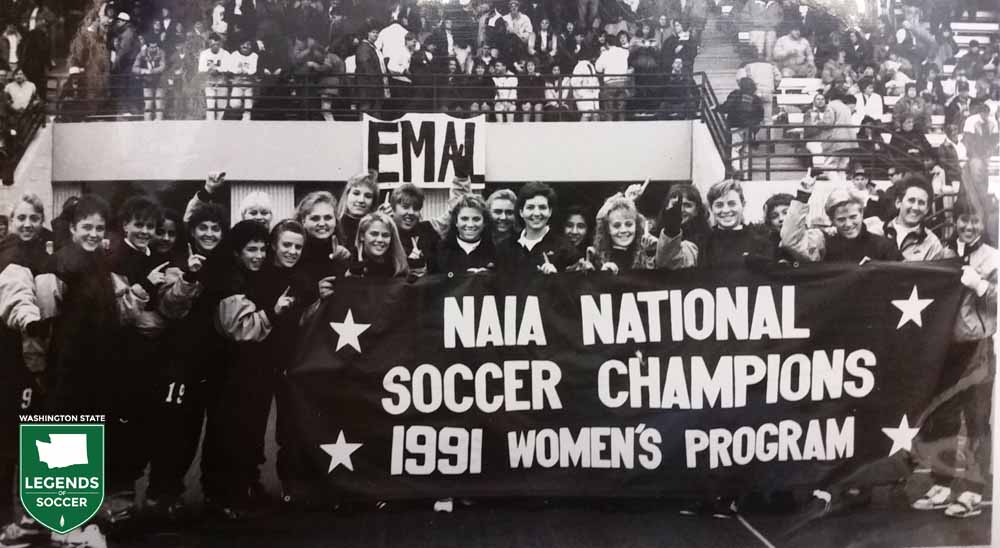 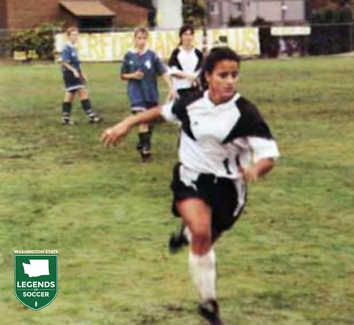 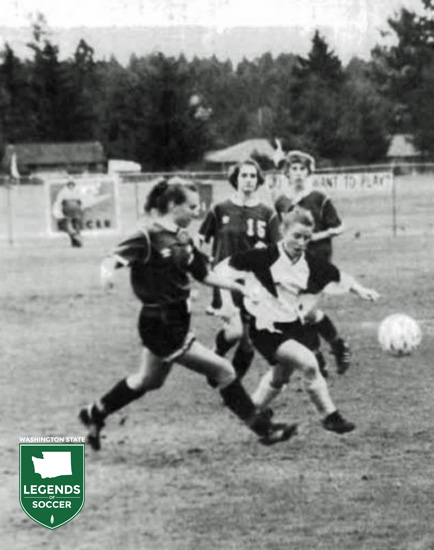 Pacific Lutheran remains the state's collegiate powerhouse in 1991, advancing to the NAIA championship game for the fourth straight year and winning a third title. 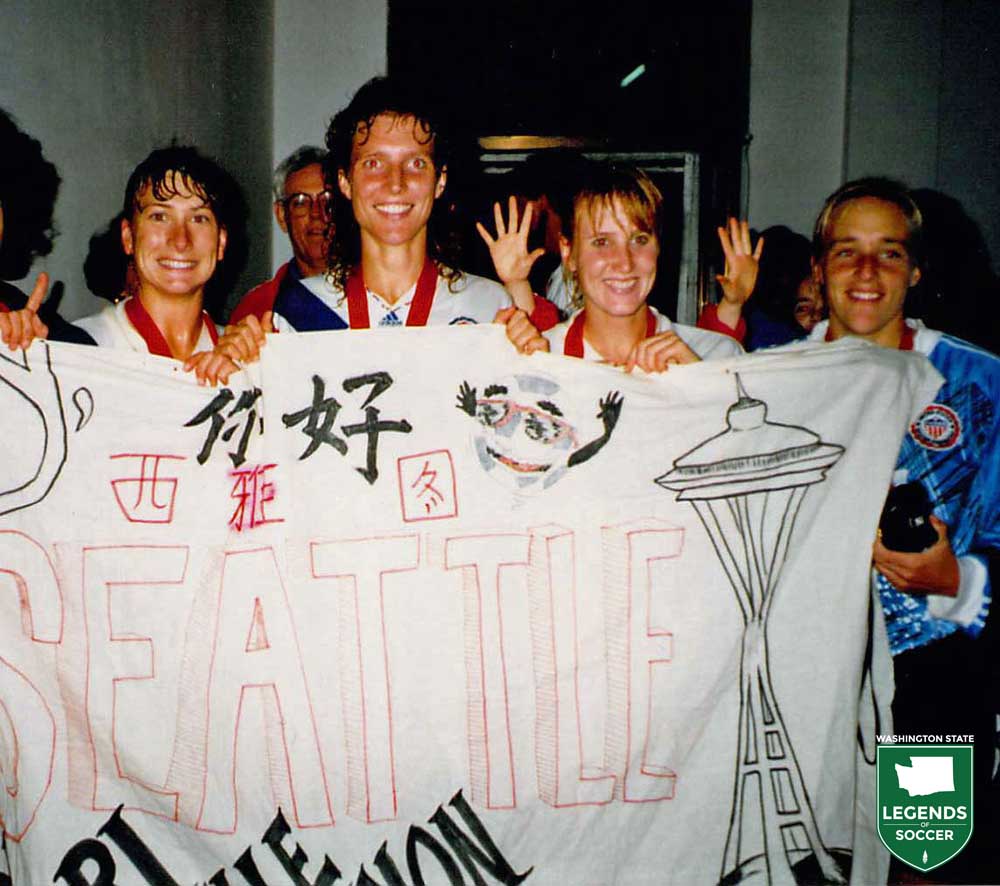 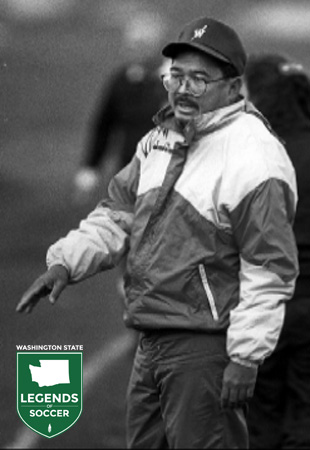 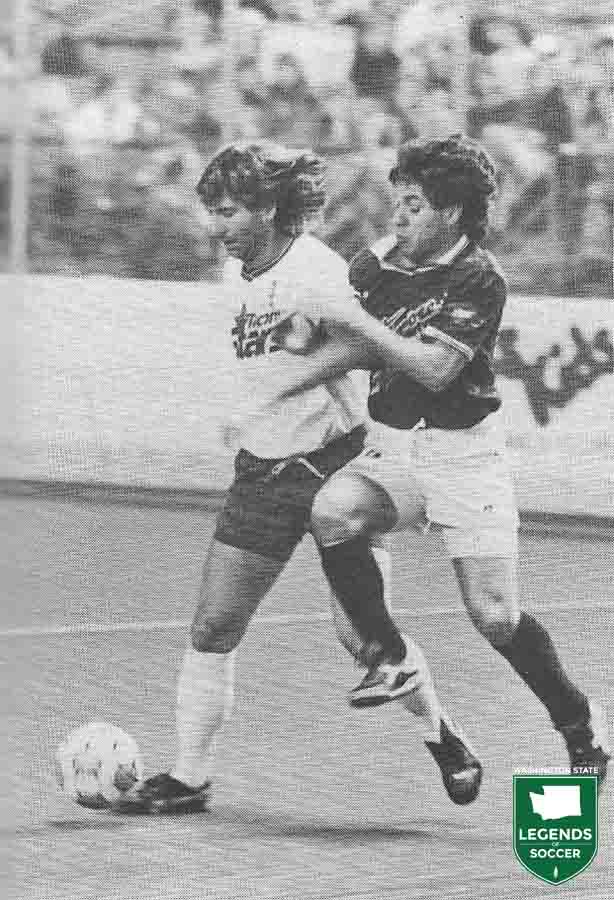 Gary Heale, left, leads the Tacoma Stars in goals and assists in 1990-91 as they reach the MISL playoffs. 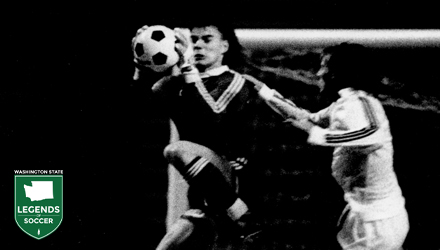 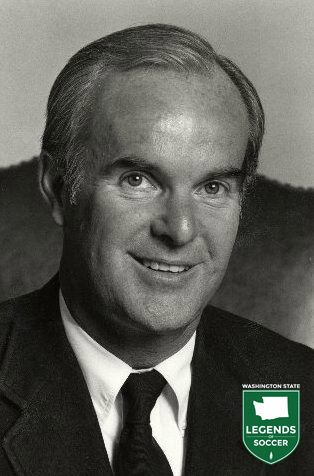 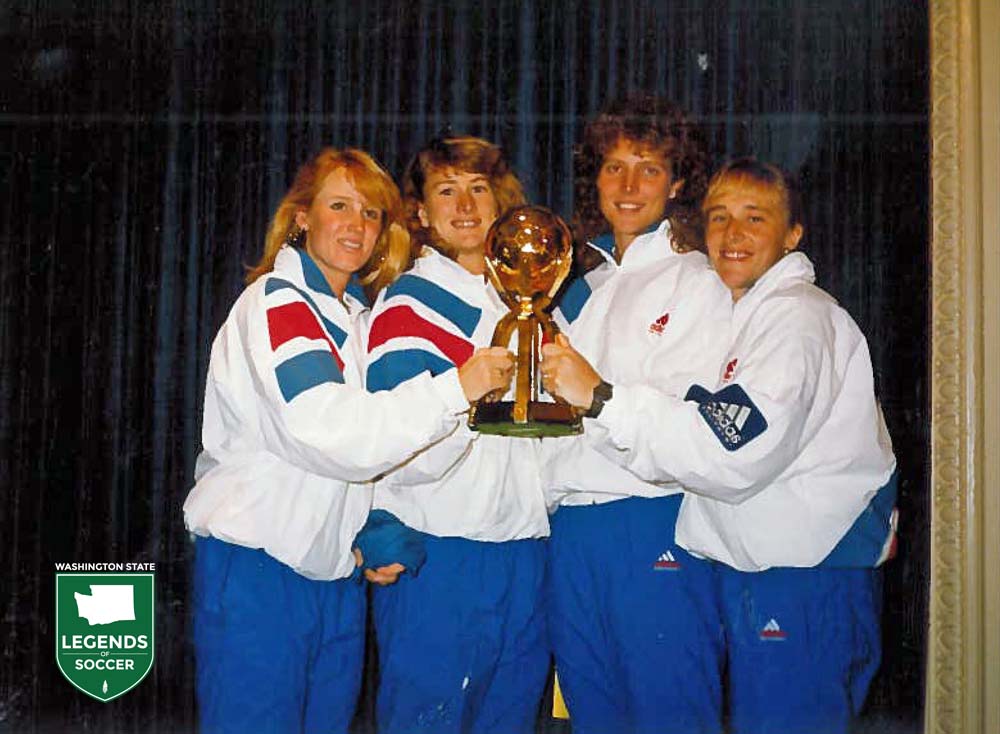 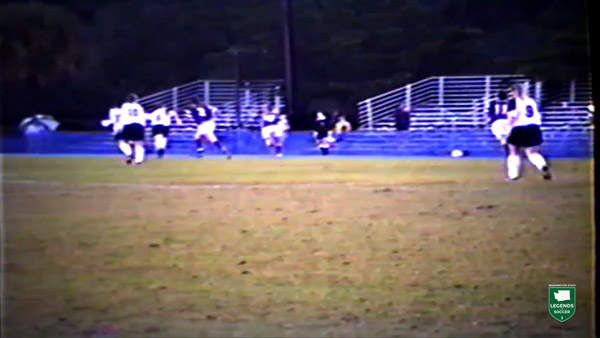 On this Day in History
Ward Forrest's hat trick provides more than enough firepower for the Heidelberg Huskies to dispatch San Jose Portuguese, 4-0, in a West Region semifinal for the National Amateur Cup. Tage Christiansen, like Forrest, a UW varsity player, adds the other goal at Interbay.
More from 1974 ›
Mark Peterson scores with 5 minutes left as Sounders clinch second Western Division title in three years and league's No. 2 seed with 1-0 win at Portland in final regular season game. Seattle has won 16 of 23 (three shootout losses) since winning only one game outright in the first eight. Some 1,000 traveling are rewarded when Peterson converts a corner kick at the near post, his 17th goal of the season. It is the final game for the Timbers in the NASL era.
More from 1982 ›
FIFA technical group completes a weeklong inspection of Husky Stadium, which is included in U.S. bid for 1994 World Cup. Paul Stiehl, head of U.S. organizing committee, claims natural turf can be successfully laid over existing artificial surface. UW athletic director Mike Lude wants assurances that the sand, gravel and sod won’t damage the football field.
More from 1988 ›
Erling Hansen’s hat trick is enough, but the Vikings add four more goals to decisively earn Northwest bragging rights with a 7-nil pounding of Portland’s Clan McCleay at White Center. Emmett Brennan, Sig Edngelstad, Austin Gunderson also score for the Vikes.
More from 1951 ›
© Washington State Legends 2021.