For some, it was a year full of opportunity, hope and success. Yet for many, 1983 will be synonymous with colossal failure. It depended upon one's frame of reference and retrospective.

Yet in the professional ranks, events largely reflected a national shift. The Seattle Sounders, facing financial challenges, were sold to Bruce Anderson, then majority control was later regained by Frank and Vince Coluccio. Meanwhile, on the field the Sounders were unable to navigate a season after undergoing a late coaching change with the firing of Alan Hinton, a leaner budget and losing several key contributors from past years, including Alan Hudson, Roger Davies and Steve Buttle. Seattle failed to make the playoffs for only the third time in 10 seasons, experienced further decline in attendance and ceased business operations days after completing the campaign. In all, the North American Soccer League lost three of its 12 teams during the offseason.

Meanwhile, the 6v6 indoor version of the game was surging, and a new pro venture was underway to the south. A group of prominent Tacoma area leaders purchased a franchise, beginning play in the newly completed Tacoma Dome. Leading the Tacoma Stars was former Sounders coach and GM John Best. By year end, the Major Indoor Soccer League had surpassed the NASL in participating teams.

It might rate as one of the most tumultuous years. Still, the youth and amateur side was advancing, both in terms of participation and pushing teams and players through to elite status nationally.

Several future national team selections led Lowenbrau FC to the national women's open finals for the fourth year in a row. Under Mike Ryan, Lowenbrau had won three national championships, but they succumbed to Dallas via penalties in the semifinal after drawing, 2-2. At a nearby Houston field, Seattle's FOE Eagles' run in the U.S. Open Cup ended with a 4-2 loss to eventual winner New York.

Seven weeks later, Washington's next title bid would not be denied. A team of Federal Way boys, coached by Ron Webber and sponsored by the popular soccer shop on Pacific Highway South, went the distance. Traveling cross-country to Rochester, N.Y., Goalpost first rallied for a semifinal victory over local favorite Oceanside, 4-3. A day later, they etched their name into state soccer history, claiming the Niotis Cup by beating Scott-Gallagher of St. Louis, 3-1.

The capper to the 1983 calendar came in December. In 1978, Seattle Pacific became Washington's first collegiate champion. Five years later, they proved it was no fluke and, as time would tell, they launched an era of dominance. Featuring a team, like Lowenbrau and Eagles, comprised primarily of homegrown players, SPU upset the No. 1 team in NCAA Division II on the road. Gerard McGlynn's goal and Bill Glandon's shutout gave the Falcons a 1-0 win over Tampa.

While the Sounders closed their first era, an alternative version of the game took root in Tacoma. Meanwhile, the state's youth began flexing their muscle on the national stage.

Tacoma lands a Major Indoor Soccer League franchise after securing primary tenant rights away from a bid by the Sounders. Tacoma ownership buys the mothballed Denver Avalanche franchise for an undisclosed price, just over four months before the season starts.

SPU On the Road Again

Seattle Pacific crisscrosses much of the continent twice during the season, racking up some 14,000 air miles while playing in seven states and provinces, including two trips to Florida. It all begins with a 6-1 victory at New Orleans before moving on to Florida and Georgia. A midseason trip takes them to Wheaton (Ill.) and the season ends back in Tampa.

After 10 seasons, the Sounders confirm they are ceasing operations, two days after a season-ending, 2-1 loss to Golden Bay at San Jose. Ownership squabbles, the loss of popular players and the poorest on-field performance in the club's existence all contributed to declining attendance and significant financial losses. The Sounders were one of three NASL teams to fold, leaving the league with nine teams for what proved to be its final season, in 1984.

Seattle’s Husky Stadium is listed as one of 14 potential venues in the U.S. Soccer Federation’s formal application to host the 1986 World Cup. Colombia’s withdrawal as host has prompted FIFA to accept offers from Mexico, Canada and the U.S. Husky Stadium would be one of four sites requiring grass installed over the existing artificial turf. On March 30, FIFA unanimously selected Mexico to host.

A crowd of 12,284 is on hand for the inaugural Tacoma Stars game in the Tacoma Dome. Danko Grgic scores the Stars' first goal, but the L.A. Lazers go on to win, 6-2.

Bidding for a fourth straight national women's amateur championship in Houston, Seattle Löwenbräu is dethroned by Dallas Michelob Ladies via penalties (2-2, pks) in the semifinal. Sharon McMurtry and Jan Smisek each scored equalizers for Löwenbräu. Dallas went on to win the title.

Over 800 boys and girls from 54 teams throughout the western U.S. and B.C. converge on eight North Seattle fields for the fourth annual Shorelake SC Invitational.

FOE Eagles fall to defending champion New York Pancyprian Freedoms, 4-2, in the semifinal round of the U.S. Open Cup in Houston. The Freedoms went to take the championship over Kutis of St. Louis.

In the Sounders' final home game, Peter Ward scores all three goals in a 3-2 victory over San Diego. However, the Kingdome attendance is only 7,331 and Seattle went on to lose its final two games, failing to make the playoffs for only the second time in nine years.

Annette Duvall scores a record six goals in Western Washington’s 8-1 pummeling of Puget Sound in Bellingham. A junior, Duvall scores five times in the second half as the Vikings pull away from a 1-1 halftime tie. Four of her goals come in a span fewer than 15 minutes.

A Change on Montlake

Tacoma's Jeff Durgan, 21, scores in his U.S. National Team debut, a 2-0 road victory over Haiti. The big central defender left the Cosmos after three seasons to serve as captain for the newest NASL club, Team America, in Washington, D.C.

Seattle's Mike Ryan is named first head coach of the U.S. Women's National Team which will debut in early 1984. "This is something I've always dreamed about," said Ryan, who guided five women's teams to national titles since 1980.

Sean Connors is named to U19 national team while Darren Royer and Robb Sakamoto are both selected to U15s.

The first sporting event in newly-opened Tacoma Dome features the Sounders hosting Brazil Internacional in their EuroPac tournament opener, a 2-1 loss before 6,340.

Mark Peterson of the Sounders scores the first goal at BC Place, but the Vancouver Whitecaps rally to beat Seattle, 2-1, before a record Canadian crowd of 60,342.

Joan Dunlap scores and adds an assist in North Carolina's convincing 4-0 victory over George Mason for the NCAA championship in Orlando. A 22-year-old freshman from Seattle, Dunlap figures in two of three UNC goals during an 11-minute span. She strips a defender at the top of the box and drives in to make it 3-nil. A few minutes later Dunlap feeds Amy Machin. The Tar Heels finish 19-1-0.

An early counterattack goal from Gerard McGlynn stakes Seattle Pacific to an early lead that is never relinquished as the Falcons silence a capacity crowd of 4,000 and top-ranked Tampa's potent attack, 1-0, to claim the NCAA Division II championship. Bill Glandon made seven saves as the Spartans were shut-out at home for the first time in three years.

Beginning of the End

“
I love the Sounders. I don't want to see them leave.
— Sounders fan
“
Pitch is what you get on your hands when you take out the Christmas tree. Lad is what I call my dog.
— Bruce Anderson, new Sounders owner, bent on Americanizing club
Collegiate Men's Records
Collegiate Women's Records
State Youth Recreational Cup Winners
Washington State Youth Champions
WIAA Championship Games 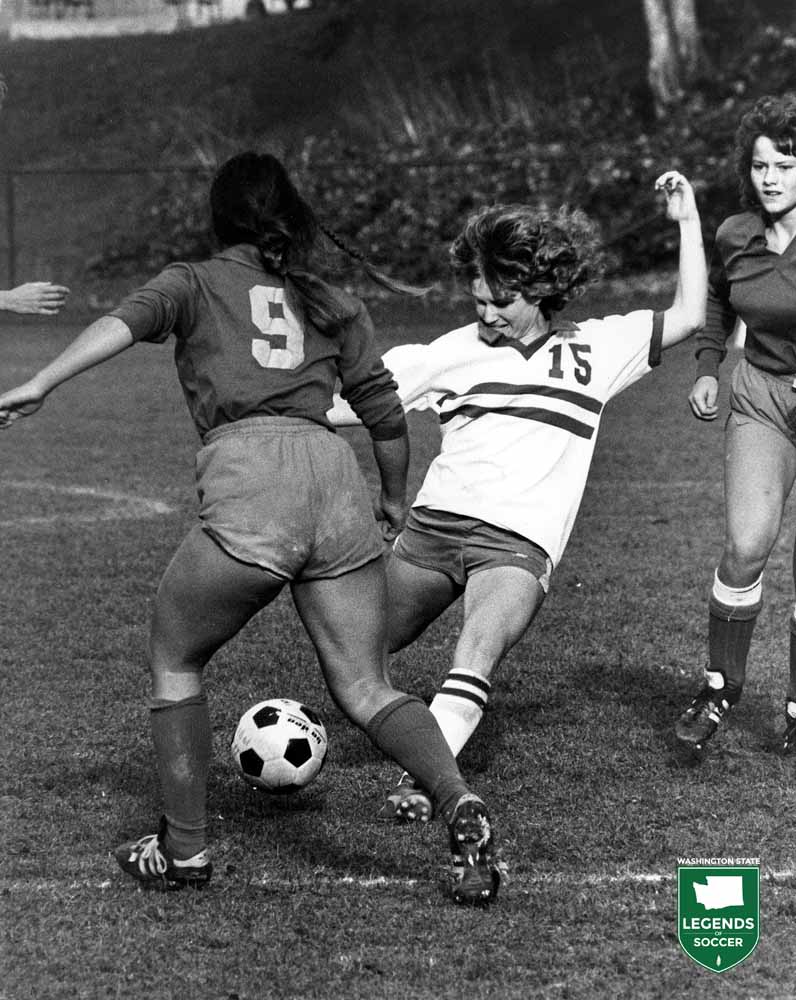 Tacoma's Jeff Durgan left the Cosmos for Team America and debuted for the USMNT in 1983. 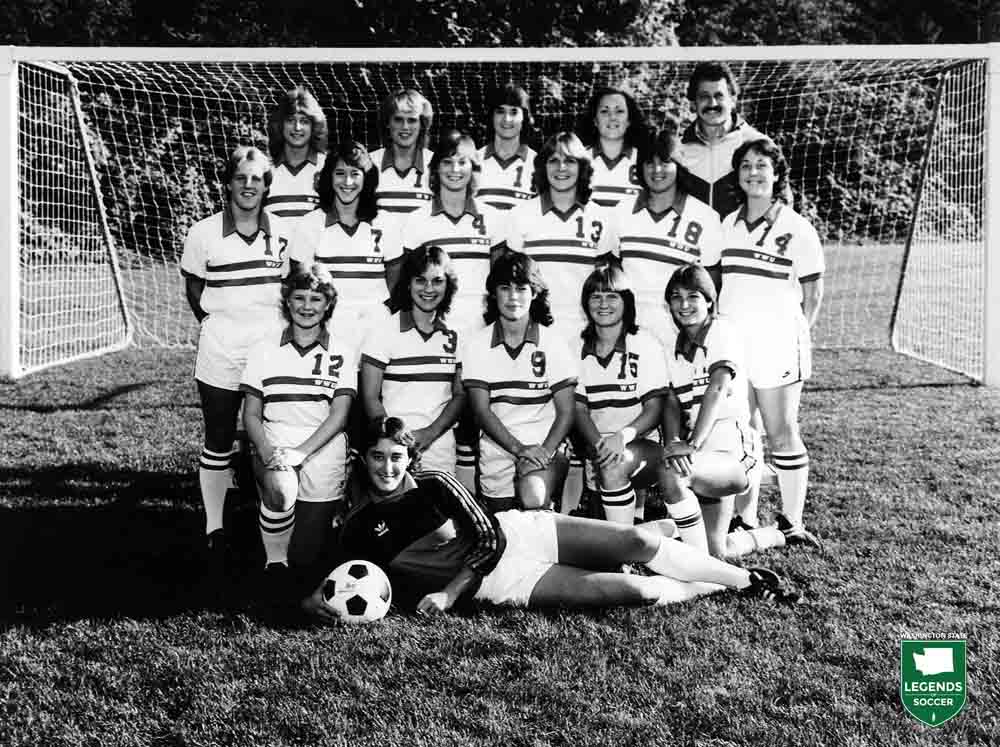 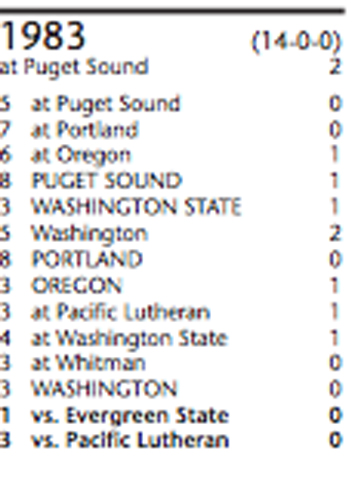 After losing out to the Stars for indoor rights in Tacoma, the Sounders briefly considered far-flung options. 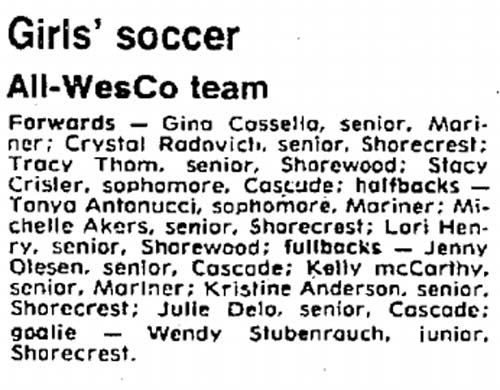 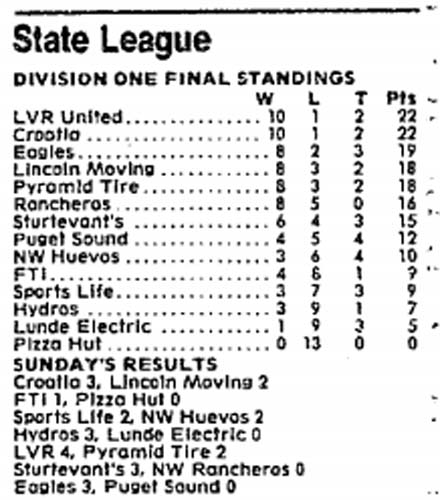 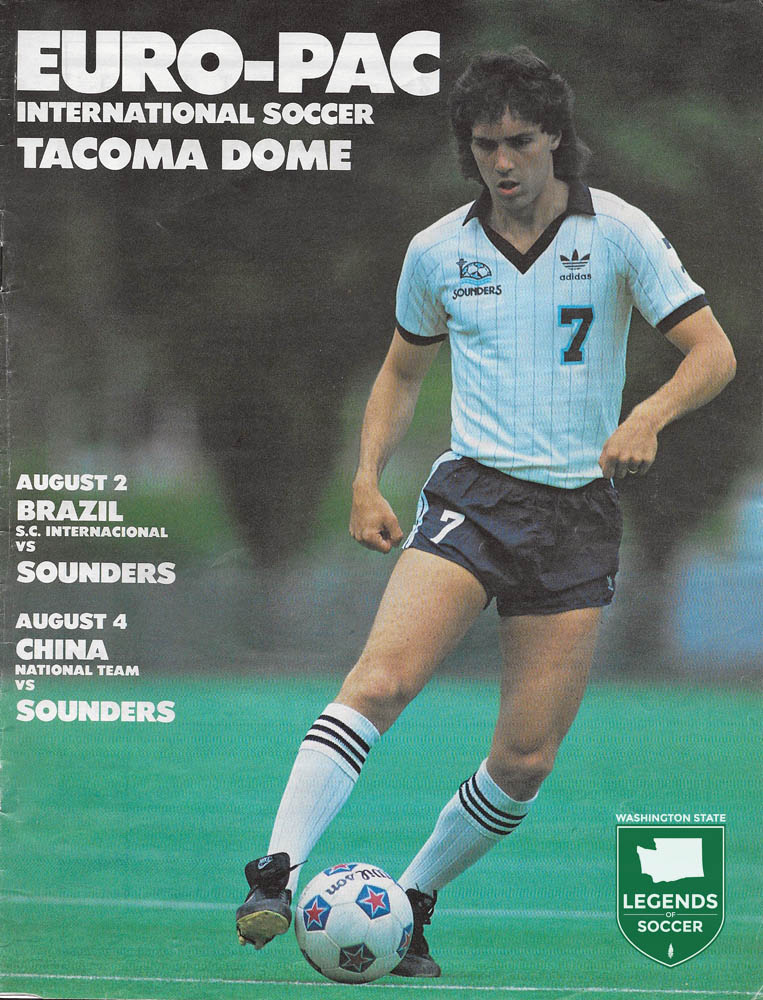 When the Sounders hosted the first sporting event in the Tacoma Dome, it was only natural to have a native son, Mark Peterson, on the program cover. 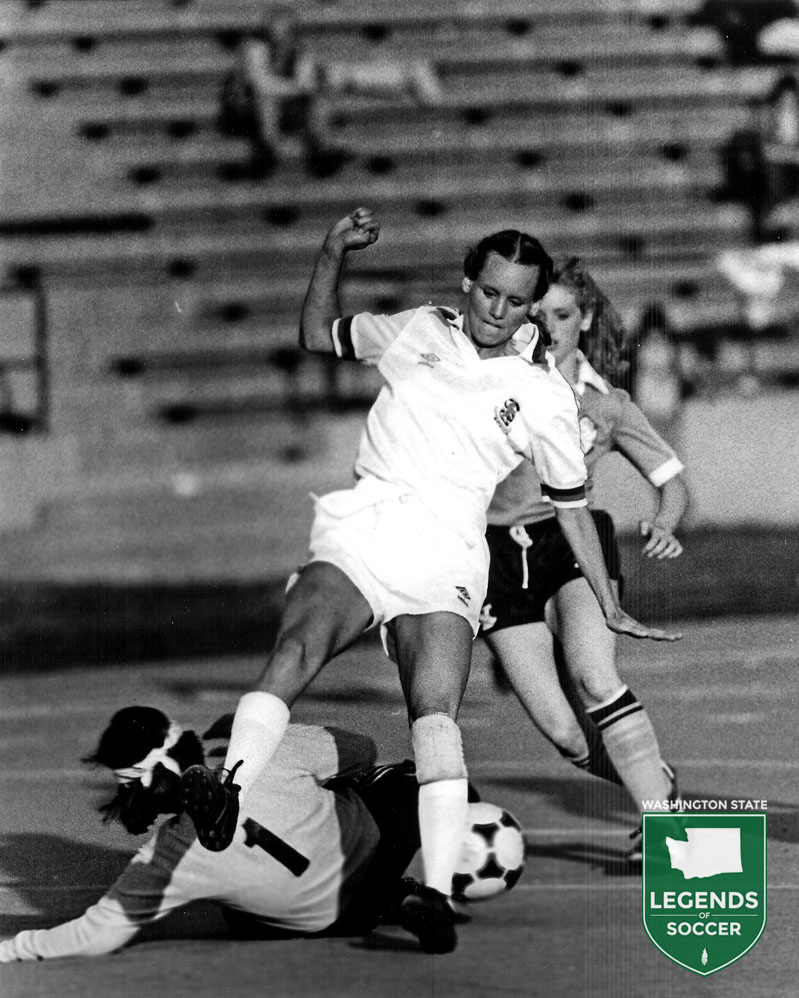 Mark Peterson celebrating one of his final goals for Seattle.

Mike Enneking proved an attacking force for the Washington Huskies. 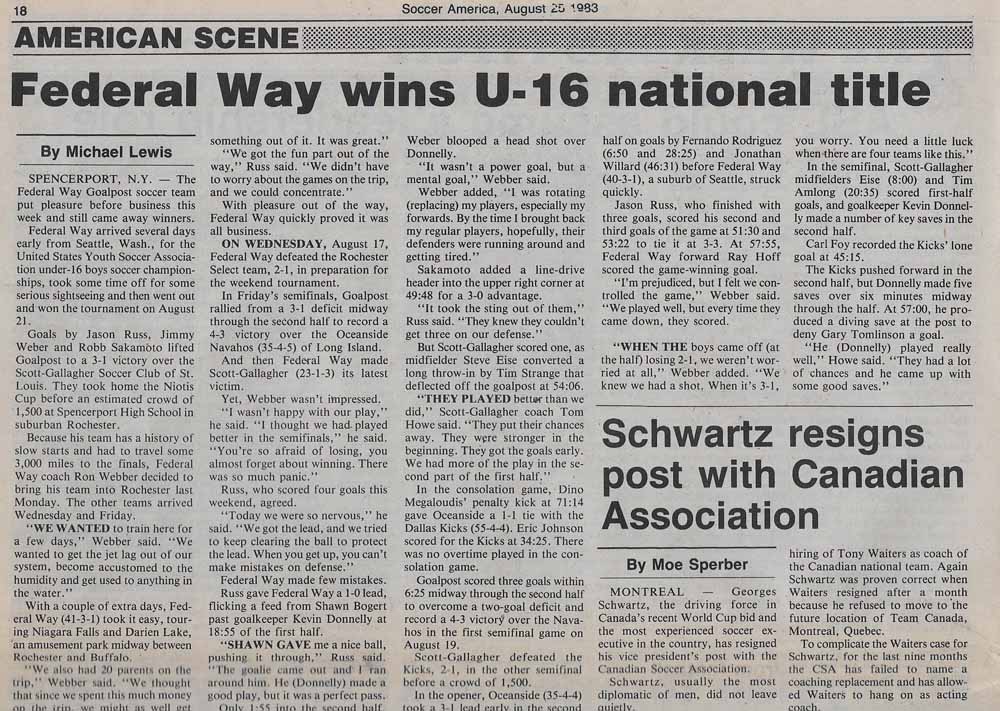 From the pages of Soccer America magazine. 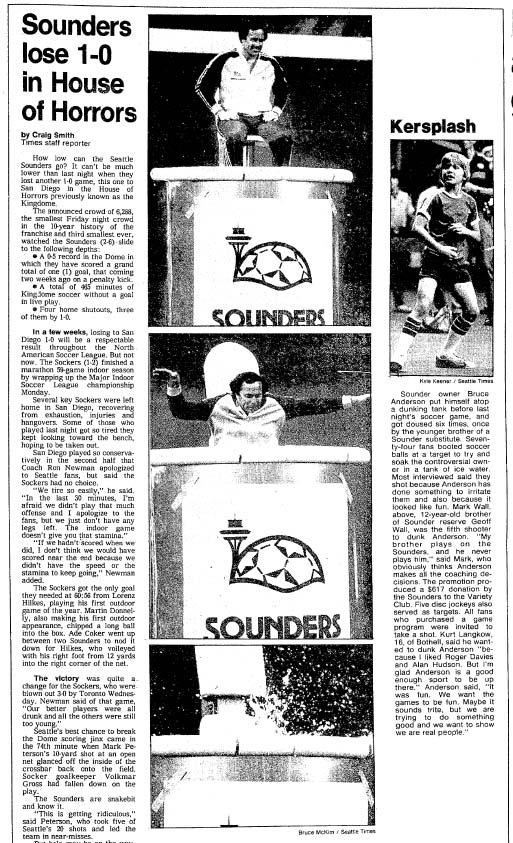 New Sounders owner Bruce Anderson made a desperate attempt to win back public favor, submitting to a dunk tank where fans took aim.

One of the brights posts in the final Sounders season of the NASL era was the emergence of their homegrown rookies, including forward Chance Fry.

Brazil's Internacional takes the field prior to the Tacoma Dome's first sporting event, the EuroPac Cup. 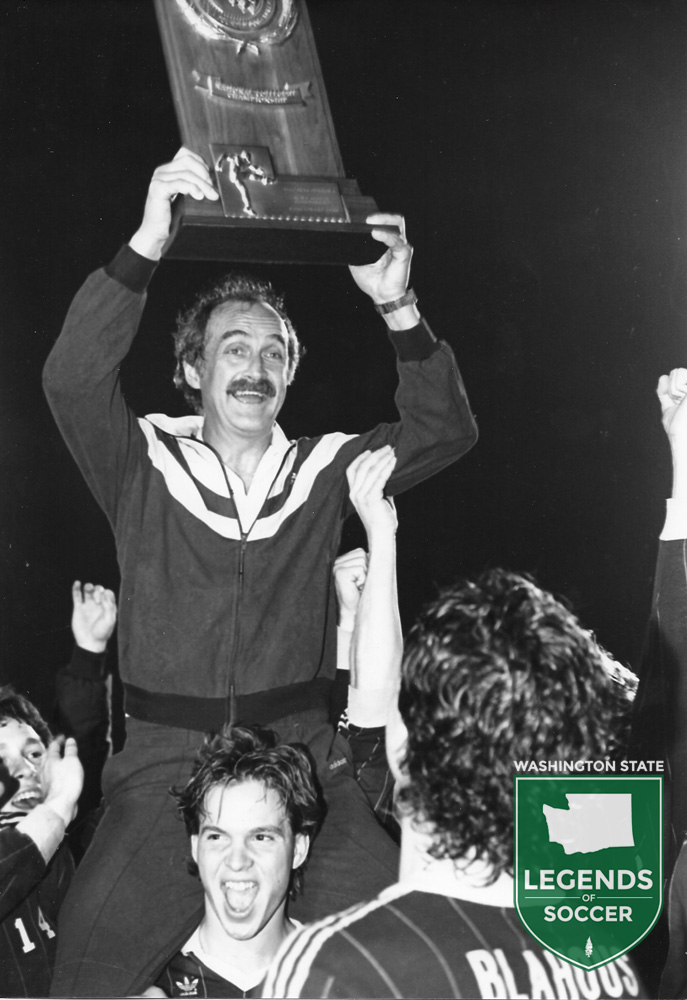 Lifting the NCAA championship trophy in Tampa was none other than Seattle Pacific coach Cliff McCrath.

Alan Hinton was fired by new owner Bruce Anderson after leading the Sounders to Soccer Bowl the previous season. 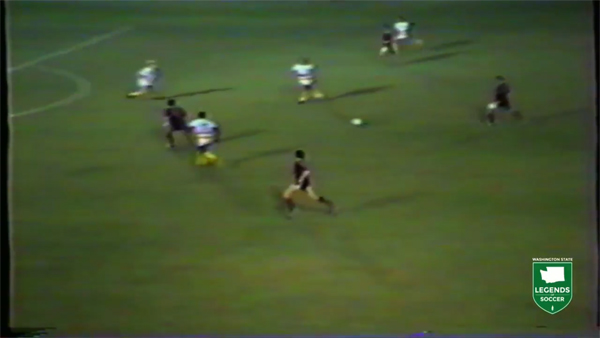 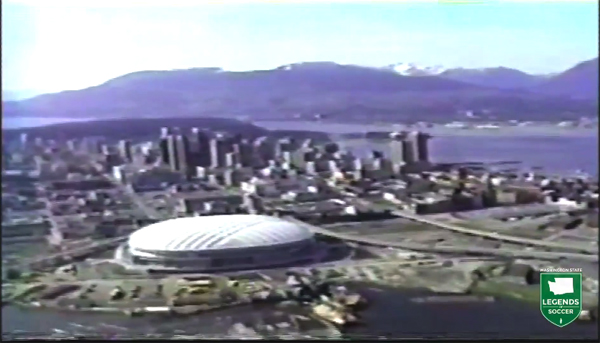 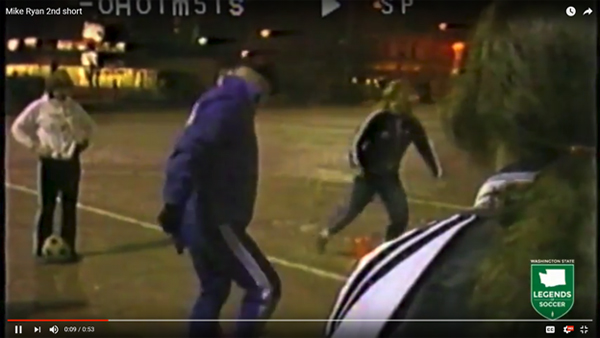 On this Day in History
Dick McCormick and Jean Harbor score two goals apiece and Seattle wins, 7-1, at Houston to sweep the CISL Championship series. The SeaDogs finish the playoffs 6-0 and 27-7 overall in their third season.
More from 1997 ›
Renton Elks host benefit game for youth activities – Boy Scouts, bowling, talent show and scholarship awards – at Renton High School Stadium. It matches Vancouver Firefighters vs. Washington State Football Association all-stars. Vancouver defeats the Washington all-stars, 3-2.
More from 1955 ›
Puget Sound's bid for an NCAA Division III women's championship goes all the way to penalty kicks, where the Loggers are denied by Wheaton. The Thunder make all five penalty attempts to prevail, 1-1 (5-4), at Greensboro, N.C. Elizabeth Pitman puts UPS (22-2) ahead by scoring her sixth goal of the season on a header from Cortney Kjar in the 36th minute. Wheaton, which had never trailed in regulation this season, ties it with in the 61st minute. It is Kjar's record 14th assist of the season.
More from 2004 ›
Sounders’ string of wins over MLS clubs in U.S. Open Cup ends before 10,385 at Qwest Field with a 2-1 extra-time loss to FC Dallas. After a scoreless 90 minutes, Carolos Ruiz strikes in the first minute of overtime, before an Abe Thompson penalty kick doubles the lead in the 118th. Leighton O’Brien gets a stoppage time consolation goal for Seattle.
More from 2007 ›
© Washington State Legends 2022.