×
Ripple Effect of a Revolution

The Space Age begins when the Soviets send Sputnik into orbit. Meanwhile, humankind’s first artificial satellite circles the planet every 96 minutes while within Earth’s atmosphere three Boeing B-52s, all built in Seattle, circumnavigate the globe nonstop in just over 45 hours. Elvis Presley, the newly-crowned King of Rock and Roll, pays Washington a visit for the first time, staging three late-summer concerts in Spokane, Tacoma and Seattle, gyrating and performing hits singles such as "All Shook Up” and “Hound Dog.” Elvis pulls over 16,000 to Sicks’ Stadium, the overwhelming majority being teenage girls. Ten days earlier, a larger and much different crowd came to the ballpark to see Yakima’s Pete Rademacher, an Olympic gold medalist, fight (unsuccessfully) for the heavyweight title versus holder Floyd Patterson.

Ripple Effect of a Revolution

Soccer’s a world game and in the jet age the planet seems to always be shrinking. Just weeks after the Hungarian Uprising, refugees begin arriving on in America, many with uncanny skills shared with those of the world-renowned Magical Magyars and their initial introduction of total football. By springtime they are finding their way to fields in Seattle.

Some of the Hungarians were professionals or members of the military-sponsored clubs back home, and others were aspiring amateurs with occupations ranging from musician to electrician. They are eager to absorb American culture, attending pro hockey and college basketball games, but soccer is part of their fiber.

Istvan Biro, 29, played for Budapest Lokomotiv of the second division. Biro rates local soccer as good but nothing close to the level he left, where crowds were 5,000-10,000.

Tibor Farkas, formerly of Debrecen Lokomotiv, is anxious to form a team of fellow countrymen, stating, “We hope to get in a league here next year.”

The refugees first congregate in 1957 as a state first division club under as United Milk, sponsored by Stephen Balough, the Hungarian-born president of United Milk Service.

In reality, it would be two years before a primarily Hungarian club forms. It will be worth the wait.

1957: Ripple Effect of a Revolution

Both a testimonial match and banquet are held for the ailing Barney Kempton. Proceeds go toward Kempton's medical expenses. Over 500 see Vancouver's Royal Oaks defeat a Seattle all-star selection, 2-0, at Catholic Memorial. Former mayor Bobby Harlin, sports promoter and newspaper editor Royal Brougham are among the banquet speakers who toast Kempton's years of service to the game over 40 years. Besides being an outstanding winger in his day and key administrator, he is credited with keeping the youth game alive, having helped organize the sport in Parochial schools under auspices of the CYO.

Newly-arrived Hungarian refugees form a team to play an exhibition versus Norden, the state league's fourth-place club. They win, 2-1. All fled their homeland in the fall of 1956, during the uprising, and arrived in Seattle in January.

First-half strikes from Pat Brown, George Goers and Mike Kligerman get Buchan Bakers on track for the Northwest championship. The Breadmen hang on for a 3-2 victory over Portland Vikings at Catholic Memorial Stadium.

In a decisive display of attacking soccer, Buchan Bakers win an unprecedented fifth straight league championship. Unbeaten during the second half of the campaign, Buchan erupts for six goals in pounding Norselander Vikings, 6-2, at Catholic Memorial Stadium. Mike Klingerman leads the way with a brace.

The Washington State Soccer Football Association requests permission from the Seattle Park Board to charge 50 cents admission for reserved grandstand seats at Sunday state league games at Lower Woodland Park. WSSFA proposes that the City would receive 10 cents of each admission. General admission bleachers would still be available free of charge.

Scotty's Sails Thru First Half

Scotty's Fish and Chips beats United Milk, 4-1, to clinch the first half at Maple Valley. Andy Phillips, out the previous few weeks, returns to score two first-half goals. Scotty's (7-2-1) stand three points above both Buchan and the Vikings.

Stan Czenis is involved on all three goals in Buchan's 3-0 win over North Vancouver Celtics. It's only the second time in six years a Washington team had beaten a Canadian side. Czenis scores the first and assists Gus Zotos and Tommy Grieve.

Stephen Balogh, sponsor of United Milk, is among the hosts of a holiday party for some 200 Hungarian refugees marking their first Christmas in America. Balogh invited every Hungarian he encountered at a recent United Milk match. Members of the Hungarian Resettlement Service and newly-founded Hungarian-American Society baked cake and pastries, Seattle businesses donated food and toys were distributed to the children attending the party at the Eagle s Temple.

It took just under six hours to whittle the field from 22 teams to one victor at the 14th annual Five-a-Side. And the last team standing is Buchan Bakers, 2-0 winners over Vancouver's Taurus at West Seattle Stadium.

“
We gather to acknowledge publicly the debt we owe Barney. He spent many laborious hours without compensation, toiling for the good of the sport. He has been an inspiration to all of us who worked with him.”
— Frank Webb, longtime referee, celebrating Barney Kempton's many contributions to the game at his testimonial banquet
“
I’d like to earn my living from the game but living in this country is enough. We just hope to make soccer a little livelier here and get more people out for it.
— Karloli (Charlie) Szilagyi, Hungarian refugee who opportunities to play professionally elsewhere but chose the U.S. and Seattle, specifically
“
If our team gets in training and starts rolling, they’ll play the most beautiful soccer Seattle’s ever seen.
— Andy Goodman, Hungarian immigrant 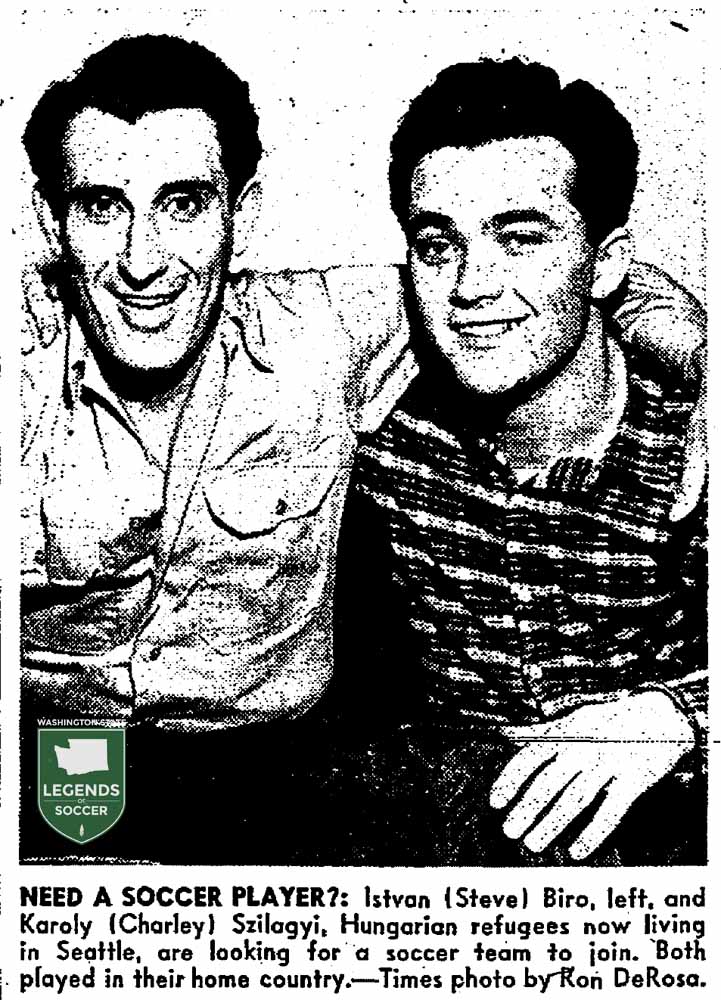 After playing in Austria, Karoly Szilagyi reportedly turned down offers to play pro in Mexico and South America before arriving in Seattle, where he played accordion. Istvan Biro had played in Hungary's second division. (Courtesy Seattle Times) 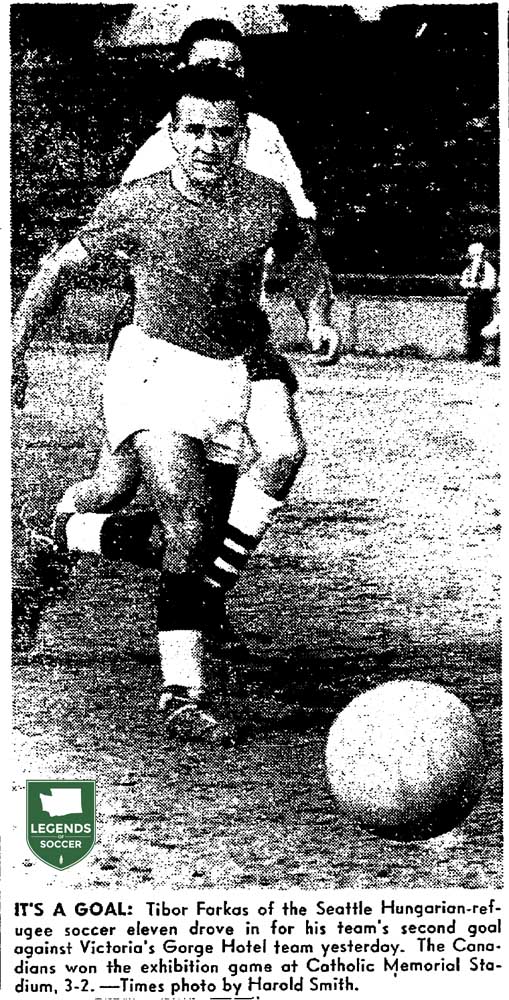 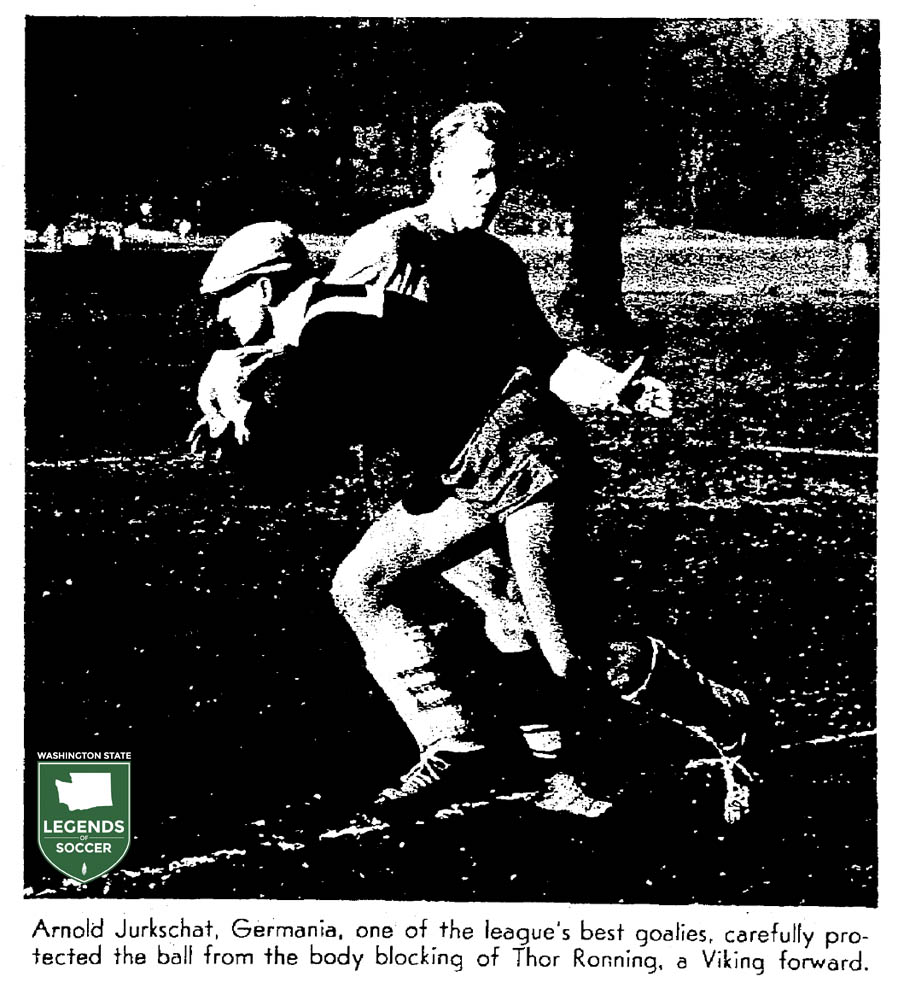 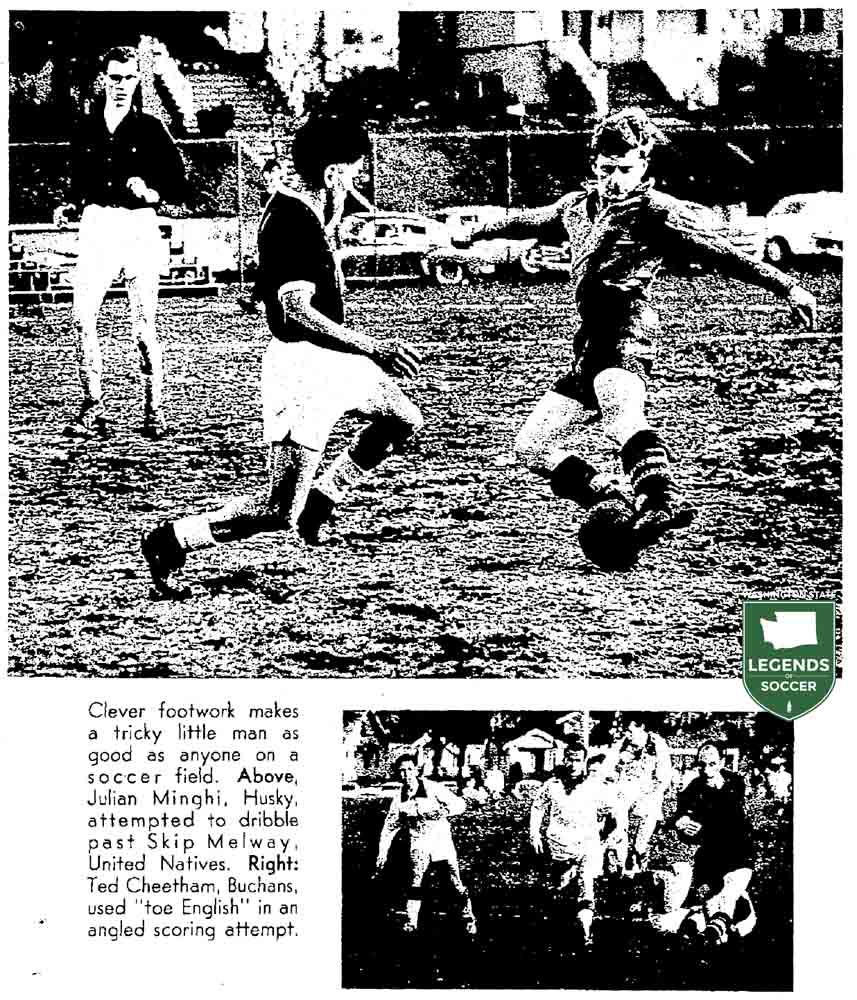 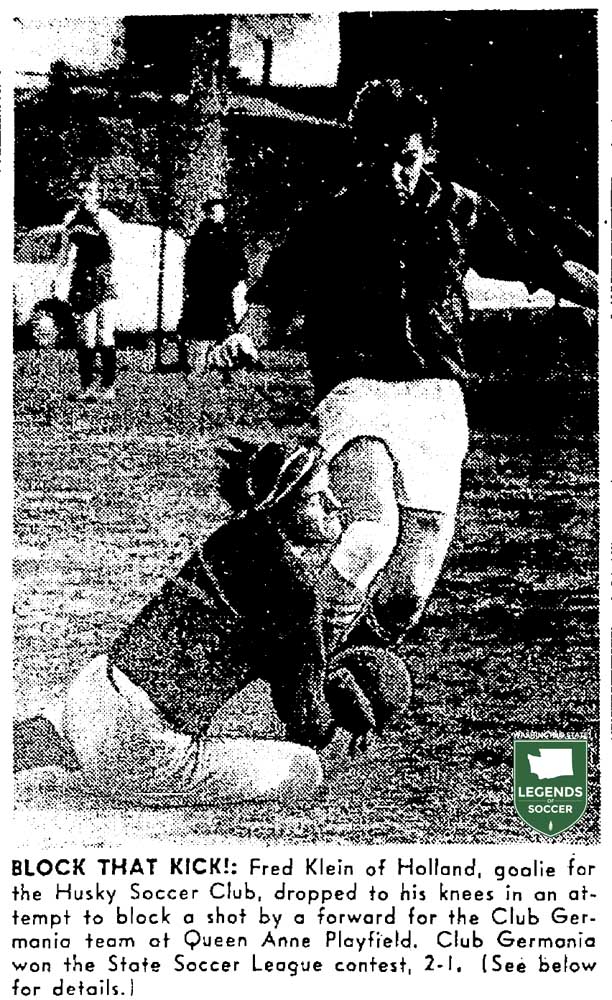 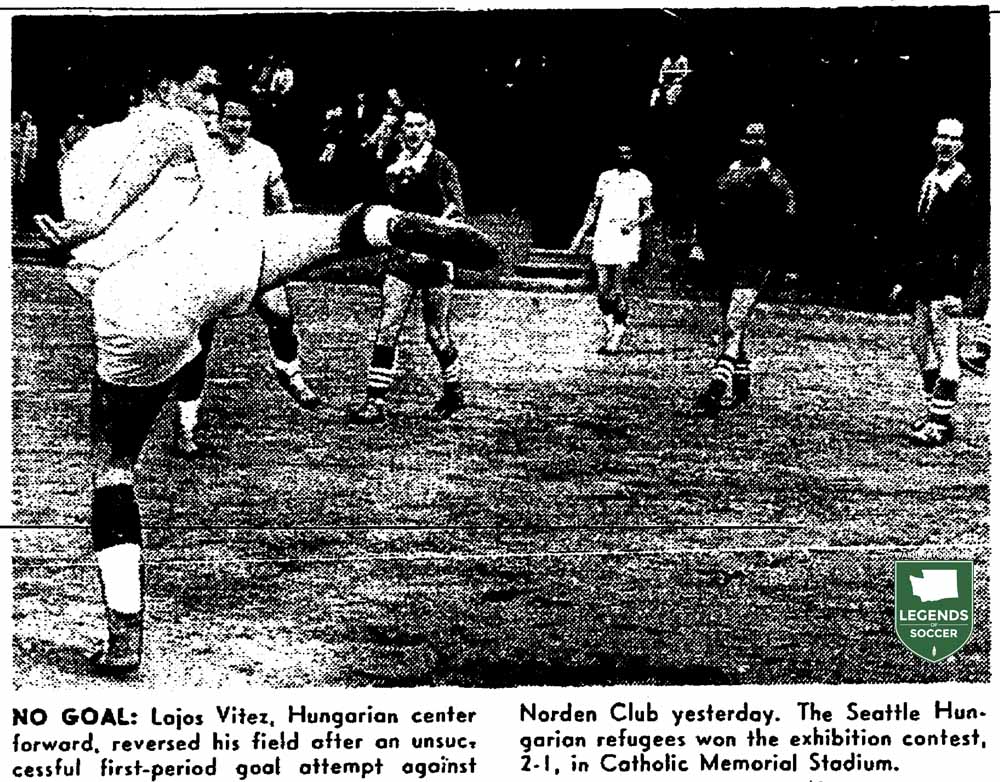 On this Day in History
I don’t believe the fans are interested only in something stamped ‘Made in America.’ I think they want to see the best players available. The way to upgrade American soccer players is through experience and talent, not through legislation.
More from 1975 ›
Shoreline freshman Lori Henry plays blanketing defense and Federal Way's Gretchen Gegg gets the shutout as North Carolina (24-0-1) defeats Colorado College, 2-0, for the NCAA championship in Fairfax, Va. Passes from Kent freshman Shannon Higgins led to the first two UNC goals in a 3-2 overtime semifinal win over George Mason. Henry, at right back, holds the Tigers' top scorer, Kerri Tashiro of Bellevue, to a single shot. Colorado's Shelley Separovich, also from Shoreline, makes the all-tournament team.
More from 1986 ›
Reidar Olsen ends his year with a bang while igniting the Vikings' run to start the second half of the state league. Olsen scores five goals in Loyal's 9-1 lambasting of E&E Meats. Fredi Krisitansen adds his 17th goal in 10 games.
More from 1962 ›
Peppering Portland with a league-record 33 shots, FC Seattle rallies to win in overtime, 3-2, before its largest crowd in four years – 6,427. Peter Hattrup’s chip over Todd Strobeck from 15 yard in the 13th minute of extra time seals it and clinches a playoff berth. Dennis Gunnell and Eddie Henderson also find the net for the Storm.
More from 1988 ›
© Washington State Legends 2023.