West Germany is allowed to rearm and admitted to NATO, England’s Roger Bannister is first to break the 4-minute mile, and both J.R.R. Tolkien’s Lord of the Rings and William Golding’s Lord of the Flies are published. The Supreme Court rules on Brown v. Board of Education, unanimously banning racial segregation in public schools. Wisconsin Senator Joseph McCarthy is censured by the Senate following the Army-McCarthy hearings, and the World Series (New York Giants sweep of Cleveland) is first broadcast in color. The battleship USS Missouri arrives in Seattle before its decommission in Bremerton, Dick’s Drive-Ins begins flipping burgers in Seattle’s Wallingford neighborhood, and Mountlake Terrace (pop. 5,000) incorporates.

Throughout America, soccer is viewed as a game for immigrants. Regional leagues from coast to coast are stocked with clubs whose identity is plain to see: Newark Portuguese, Brooklyn Hispano, New York Maccabi and the Los Angeles Scots. It is no different in Washington.

While commercial sponsors such as Scotty’s Fish and Chips and The Norselander restaurant might drop a gauzy veil, the thick British accents or Scandinavian names are obvious giveaways, and the likes of the Greek-Americans leaves nothing to the imagination. Over the next decade, more and more imports, particularly from Europe, will raise the level of play and interest in the Sunday docket. Still, the largest influx of new state league players will be those born in the United States.

Beneath the firm, well-established surface, junior programs are spreading roots on a more sustained basis following the upheaval of two world wars.

In the midst of World War II, the Associated Boys Clubs of Seattle started sprouting programs. Beginning in 1948, parochial schools were forming teams. As the Fifties approached the decade’s halfway line, young American males were earning more minutes and prompting more youth to take an interest in this heretofore foreign exercise. For the game to go forward, it needs renewable resources, and there were further indications in 1954 that fresh crops could be counted upon.

The Buchan Bakers, an outgrowth of the Fremont Boys Club, win the state cup competition, their second trophy in as many years. Far from a fluke, the Bakers are settling into a long run at the top of the state league. In Pierce County, Tacoma parochial schools field soccer teams for the first time, their winners meeting the Seattle area CYO champion.

Our friends north of the border continue to prove a fount of ideas and expertise. British Columbia coaches conduct clinics for Seattle Public Schools teachers, providing a base course for instruction during physical education classes. To aid in awakening the competitive spirit, the top teams from Vancouver and Puget Sound’s CYO leagues are pitted in a season-ending series for the J.R. Oldershaw trophy. It proves a gateway to exchanges and competitions to come.

A pair of Bill Smith strikes cements the Buchan Bakers' grip on the state league first-half championship by virtue of a 2-1 playoff defeat of defending champion Norselander at White Center Stadium. The two teams had finished the first half tied at 7-1-0 and split their two meetings. Chet Miller, back from the U.S. Marines, starts in goal for the Bakers. It's his first game action in several years. Smith starts his brace with a penalty kick and then converts a right-wing cross from Michael Conneely.

Mike Klingerman's two overtime goals give the Buchan Bakers a 4-3 decision over the Norselander Vikings for the Puget Sound Power & Light trophy at Catholic Memorial. Austin Gunderson scores twice for the Vikings. The second of George Goers's goals for the Bakers forces extra time. Oake Forsman gets the other Norselander score.

Cathedral Wins But Falls in Oldershaw

Mike Murray scores 20 minutes into the second half for Cathedral School's 1-0 second-leg win over the North Shore All-Stars of British Columbia at Catholic Memorial Stadium. However, it's the Canadian boys who hold the Oldershaw trophy, taking the series, 2-1, on aggregate.

E&E Meats earns its second trophy of the campaign and exacts a bit of vengeance on Norselander. The Meatmen defeat the Vikings, 3-0, in the Pacific Coast Coal Cup at Catholic Memorial. Earlier, E&E had won the second half title but lost to Norselander in the state championship game.

Victoria’s Esquimalt Drydockers win the 11th annual Five-a-Side at Catholic Memorial Stadium. They beat Vancouver’s Marpole, 2-1. Esquimalt scores 12 goals in four games, with Jackey Bievens and Kenny Barnes accounting for 10 of those. Local troublemakers included the CYO Leprechauns who won their first two matches before going out to the Vancouver Firefighters, 6-0. Only the Buchan Bakers’ A and B teams reached the quarterfinals.

Cathedral School defeats Sacred Heart, 3-1, under the lights and on the slippery surface of Catholic Memorial for the Seattle CYO Bantam League championship. Wayne Haley scores all three Cathedral goals in the first half. Jack Danson nets a late goal for Heart. Twenty-six teams entered the competition.

From Hiatus to Five Goals

Glen Norberg celebrates his return to civilian life in a big way. Norberg, playing his first game since completing a two-year hitch in the U.S. Army, scores five times for E&E Meats in an 11-2 thrashing of Harvey's in a state Knockout Cup match at Catholic Memorial Stadium.

Emmett Brennan, a state league star and later top referee, is elected president of the Washington State Soccer Football Association. Vic Weston is reelected secretary. At the annual meeting, Weston is asked to contact the U.S. federation about the possibility of Washington teams entering the National Challenge Cup for the first time.

Scoring seven goals for the second time in three weeks, E&E Meats clinches the second-half title by blasting Tacoma, 7-0, at Lower Woodland. Eddie Banchero's team finishes the second half at 5-0-1 to earn a place in the season championship match against the first-half winner Norselander Vikings.

The Norselander Vikings stage a second-half comeback to take the Northwest championship, 4-1, over Viking Sports Club at Portland's Westmoreland Park. Allen Quinto takes a pass from Oake Forsman to score the opener. Roland Krug replies for Portland. But Austin Gunderson, Henry Gambino and Forsman score in the second half as Seattle pulls away for the Vikings' second title in three years.

Seattle leaders invite the U.S. Soccer FA to hold its 39th AGM in the city in 1955. It’s part of a move to lure U.S. Olympic Team trials in 1956. William T. Hobson, chair of the bid committee, believes Seattle is a natural departure point for the U.S. team to depart for the Olympics in Melbourne, Australia.

The Norselander Vikings win their first state championship in three years, beating E&E Meats, 3-1, for the McMillan Cup at Lower Woodland. The Vikings had won the first half of the season and finished third to E&E and Buchan in the second half.

A near-riot ends the action 20 minutes early at Lower Woodland Park. Referee Harry Dawes blows the state league contest between the Norselander Vikings and Greek Americans to an abrupt halt moments after the match is tied, 2-2. Vikings players object to the Greek Americans equalizer, arguing a handball was involved. Players, coaches and spectators pour on to the field, resulting in numerous altercations. One player from each team is later suspended by the WSSFA for setting off the fracas.

When the Buchan Bakers deal the previously unbeaten Norselander Vikings a 2-0 loss, it's good news for E&E Meats. After the league suspended play for two weekends because of snow-covered fields, the Meatmen take control of the state league first division in emphatic fashion, routing the Greek-Americans, 7-0, at Lower Woodland.

Finnish exchange student Oake Forsman and Austin Gunderson each score twice in the opening 30 minutes in the Norselander Vikings' 7-3 romp over E&E Meats at Catholic Memorial. It's a state semifinal replay after the two sides tied, 2-2, a week earlier. Norselander will meet Buchan in the final.

British Columbia’s Soccer Coaching Commission conducts a clinic at Seattle School District headquarters. Tod Sloan, Dan Kulai and Austin Delaney are the presenters to an audience of elementary and intermediate instructors who teach soccer as part of their physical education program.

“
It was like the World Series, a heavyweight championship fight and the Kentucky Derby rolled into one in Germany today. The occasion was the world championship soccer game in Bern, which the German team won over Hungary in a great upset, 3-2. Helmut Rhan scored the winning goal with 5 minutes to go.
— Associated Press lede, as it appeared in Seattle P-I, for 1954 World Cup final 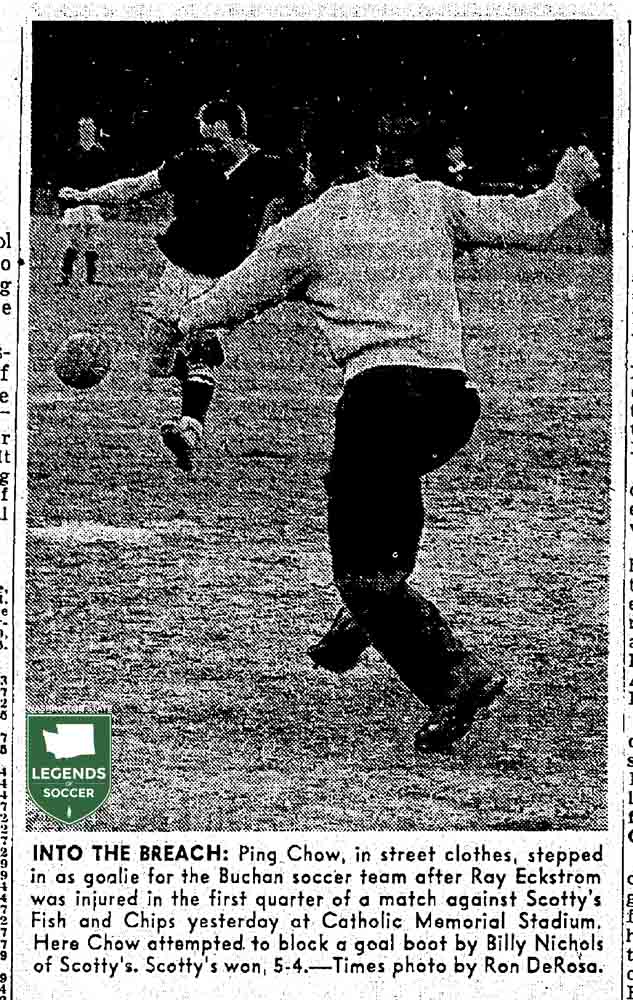 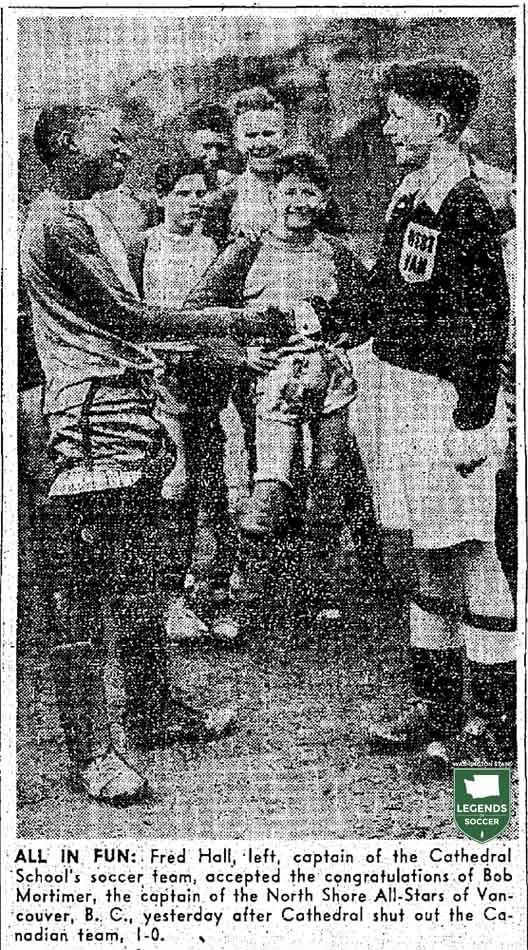 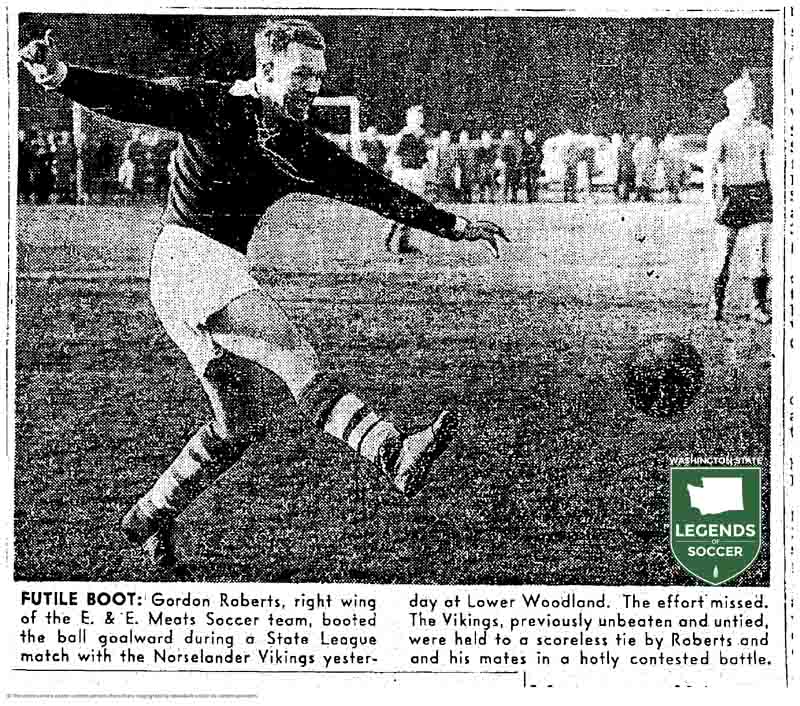 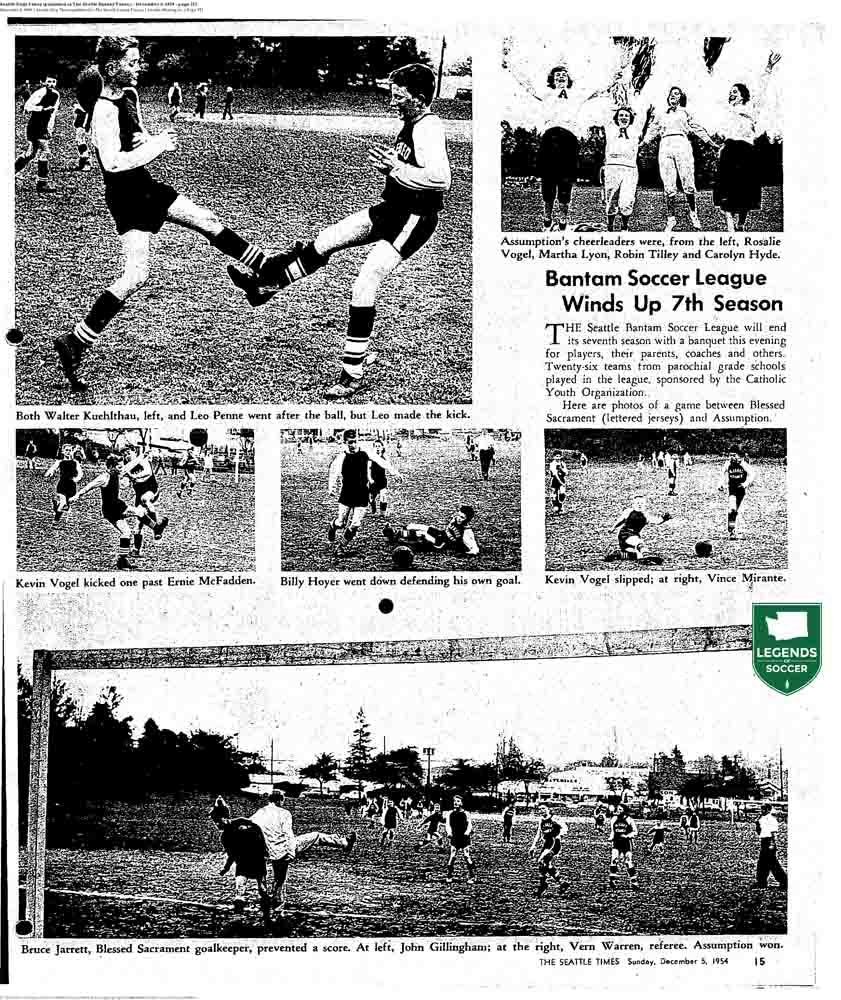 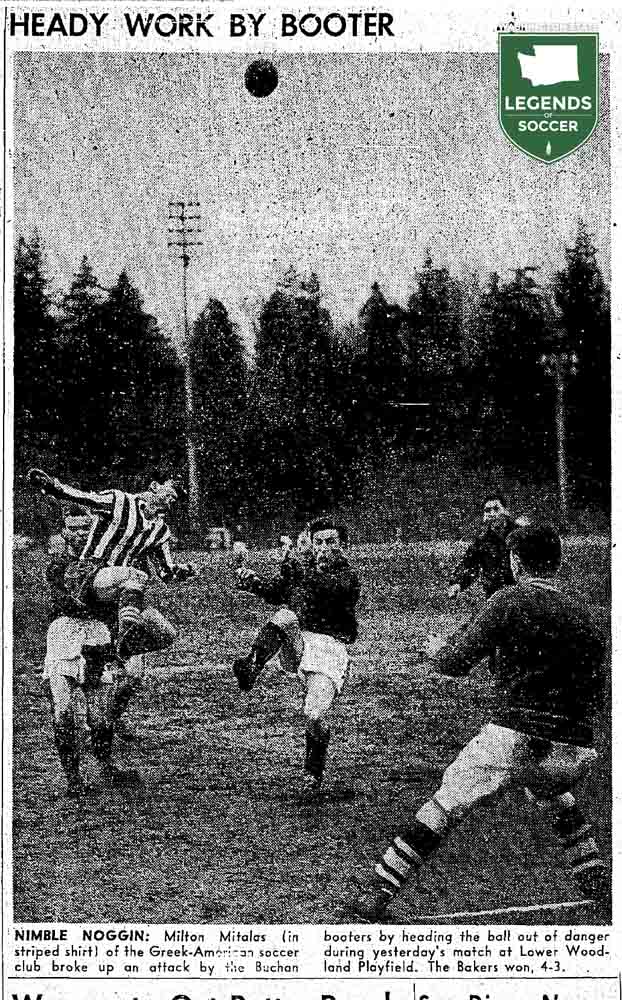 On this Day in History
Seattle mounts a miraculous comeback to keep its season alive at Fort Lauderdale. Down 3-2 with less than two minutes remaining, second-half substitutes Ian Bridge and Roger Davies are involved as Davies heads home with 73 seconds to go in regulation. Davies then heads Peter Ward's cross to a wide-open Kenny Hibbitt for the golden goal 3:43 into overtime. The two teams will meet to decide the playoff series two days later, in Seattle.
More from 1982 ›
Seattle Hungarians score first but cannot hold on in San Francisco, losing a regional semifinal to Greek American AC, 2-1, at Balboa Park. The visitors go in front when John Phelps chips the keeper in the fourth minute. But the Greek Americans dominate the second half, tying and then winning on Jim Frame's drive from 15 yards in the 50th minute.
More from 1965 ›
Adrian Webster blankets George Best and a stout Sounders defense frustrates the high-scoring Los Angeles Aztecs during a 3-1 playoff triumph at the Coliseum. The visitors go in front in the 63rd minute following a remarkable effort by Steve Buttle. After winning the ball, Buttle the ball, makes two dissecting passes on the counterattack and heads in Jimmy McAlister’s cross. Less than four minutes later Micky Cave finishes a cross from Jimmy Robertson, who had scored the opener. The Aztecs entered the match with an NASL-best 65 goals. More than 500 fans greet the team on its arrival the next morning at SeaTac Airport.
More from 1977 ›
Joe Watson’s second-half goal ends 23 years of frustration for Seattle University trying to win on Seattle Pacific’s home field, 2-1, before a near-capacity crowd at Interbay Stadium. The Redhawks score on their first shot, taken by Evan McNeley, in the fifth minute. Watson doubles the lead in the 54th before 23rd-ranked SPU cuts the deficit on Brent Egbert’s strike with 10 minutes to go. Seattle U takes the lead in the GNAC race it eventually finishes 4-0-0.
More from 2001 ›
© Washington State Legends 2023.