Overcoming a near-disastrous start, the Sounders catch fire down the stretch and reach Soccer Bowl for the first time. There, despite being huge underdogs to the Cosmos of Pele┤, Franz Beckenbauer, Carlos Alberto and Giorgio Chinaglia, Seattle battles and nearly nips the tying goal in the final minutes before falling, 2-1.

Also reaching a national final and finishing runner-up is Seattle Pacific. The Falcons take second for the third time in four years, this time to Alabama A&M, 2-1.

Most of the SPU players hail from in-state, and the SoundersÆ Jimmy McAlister becomes an overnight sensation. McAlister, 20, wins a starting job at left back, then is named NASL Rookie of the Year and, soon after, becomes the first Washington native to earn a U.S. National Team cap.

The youth soccer explosion continues unabated, jumping 41 percent, to 46,874. However, there is growing friction between the clubs and high school programs, whose players face conflicts in play and training.

WomenÆs soccer begins to get sponsorship at the collegiate level. Five years since the Title XI ruling, Whitman College is the first to be granted varsity status. Meanwhile, club programs are initiated at Seattle Pacific, Washington, Washington State and Western Washington.

A late-season surge sends Seattle to Soccer Bowl and a meeting with Pele┤ and the mighty Cosmos, where they come up just short.

Seattle gets a 13th-minute header from Jocky Scott, and Adrian Webster marks out L.A. star George Best as the Sounders defeat the Aztecs, 1-0, before a raucous crowd of 56,256 to advance to Soccer Bowl. A potential late equalizer by Des Backos bounces behind goal line but is ruled out. It is the fifth straight win in the playoffs.

Newport Bombers win fifth straight state title, this time as U19 girls, with 6-5 double overtime win (after trailing 5-3 with 2 minutes to go) over Highline Dirty Dozen at Renton Stadium.

Out of Order in Rochester

Three red cards ¢ players on each side as well as the LancersÆ trainer ¢ and eight yellows are issued by referee Henry Landauer in SeattleÆs 2-1 loss at Rochester. Dave Gillett, the SoundersÆ ejection, needed a security escort past 50 belligerent fans. The game was halted for 10 minutes to restore order after Gillett and the LancersÆ Ibrahim Silva scuffled, before Mel Machin decked Silva. Adrian Webster had been stretchered off with a knee injury beforehand. A total of 55 fouls were whistled.

Dan Vaughn completes his career as WashingtonÆs scoring leader, getting his 16th of the year and 52nd overall to open the 4-1 victory over Seattle University at Husky Stadium.

The Sounders' new play-by-play announcer is Wayne Cody, and his preseason call of Sounders-Aztecs is in Aberdeen, where trap-door entrance to Stewart Field press box is too small to accommodate CodyÆs 325-pound girth. Instead, he is lifted through a window via a crane, featuring a basket marked ō30-ton limit.ö

Seattle native Jimmy McAlister, 20, is voted NASL Rookie of the Year. McAlister, who grew up in West Seattle and attended Kennedy High School, was also named to the NASL all-star third team. ōI didnÆt come out of college like the No. 1 draft choices. I just came out of high school. Gabriel and Bobby Howe really put me in over my head, but they had confidence in me,ö said McAlister.

Falcons Are First to Travel Afar

In the final competitive game for legendary Pele┤, the star-studded New York Cosmos defeat the underdog Sounders, 2-1, before a Portland record crowd of 35,548 in Soccer Bowl. SeattleÆs tying goal by Tommy Ord is scored while the TVS broadcast is in commercial break. Steve Buttle hits the post with 7 minutes left after earlier equalizing attempts by Mike England and Dave Gillett hit the post and are saved, respectively. ōDavid did not beat Goliath,ö writes The Times.

Jimmy McAlister becomes the first Washington native to earn a cap for the U.S. National Team. Fresh from being named NASL Rookie of the Year, McAlister, 20, comes on as a substitute in 2-1 win over El Salvador in San Salvador.

Tommy Ord scores SoundersÆ historic first hat trick in 4-1 win over Connecticut Bicentennials at New HavenÆs Yale Bowl. All three goals from less than 6 yards out. Ord had been acquired from Vancouver only eight days earlier.

Down 2-0 to Portland at home and winless in the first three games, Sounders coach Jimmy Gabriel inserts himself into the game in the second half, sparking a three-goal fight back. Paul Crossley ties it and David Butler scores twice, netting the winner in the 86th minute.

TVS, which syndicates NASL national telecasts, instructs KIRO 7 to delay broadcast of the Sounders-Cosmos game for one week. Short of a sellout, crowd of 41,720 sees Seattle beat Pele┤, Franz Beckenbauer & Co., 1-0. KIRO, which argued for an 11-hour delay, opts not to show week-old replay.

A flurry of eight shots in the final minutes does not produce the game-tying goal, and SPU succumbs to top-ranked Alabama A&M, 2-1, in the NCAA Division II championship game in Miami. The Bulldogs go in front, 2-nil, on deflection and a rebound. Servando RiveraÆs penalty in the 82nd minute queued the late rally. Earlier, the Falcons miss a penalty attempt. Scott Chase is named the gameÆs defensive MVP.

“
Our fans are a great advantage to us. TheyÆre like magic. But for players like George Best our stadium and our fans lift them a bit. And that can be a disadvantage for us.
— Jimmy Gabriel, Sounders coach, about huge crowd expected for NASL semifinal
“
We have no super names or anything like that. Some of our players are very, very young, and they are going to come through and be tremendous. I just thought we played a better game than they didģ.WeÆre sorry. We lost it. But we gave it everything we've got.
— Jimmy Gabriel, Sounders coach, after Sounders fall to Cosmos, 2-1
“
He has good technique. He does everything we ask of him and more. HeÆs a blue-chip bet.
— Jimmy Gabriel, Sounders coach, on his youngest signing, Eddie Krueger
“
With young children, what you are after is development of ballhandling skills. They donÆt play a true team game at this level. They all go for the ball. ItÆs like advanced kickball. The kids are like a swarm of bees after honey.
— Marietta Gruber, on Lynnwood-Edmonds youth clubs implementing 7-a-side games
“
We're about 30 feet in the air, and the guy running the crane said the only thing I didn't want to hear: 'Uh-oh.' We're caught there for about 25 minutes, swaying in the rain...So we get to the press box and there are no phones. Then this little telephone guy shows up with a pink Princess phone and a green Princess phone. He plugs them in and we call the station and we're on the air ¢ 40 minutes late...I went over to a Chinese restaurant after that game and had a very long conversation about soccer with Jack Daniels and Jim Beam. That was the first soccer game on KIRO.
— Wayne Cody describing his entrance to broadcasting soccer, at Aberdeen
“
New York has got $3 million players and we donÆt have anything like that. WeÆre just down to earth.
— Sounders fan after Soccer Bowl loss to Cosmos
“
If ever that concrete lid was going to crumble, it would have last night as 56,256 devotees of the Sounders cheered themģOn the basis of decibels expended per goals scored, it must have been a world-record din.
— Seattle Times columnist Georg Myers on crowd's effect on Seattle-Los Angeles semifinal
“
ōWe have eight football teams in Midway and 39 soccer teams. All they need is shoes and a $10 fee for uniforms. Everything else is volunteer.ö
— Highline area youth coach
“
HeÆs only the greatest player who ever played. I asked him right before the end of the game and he said I could have it. If I ever have any kids IÆll give it to them.
— Jimmy McAlister, Sounders homegrown rookie defender on Pele┤giving his jersey following his final competitive match
Collegiate Men's Records
Collegiate Women's Records
Washington State Youth Cup Winners 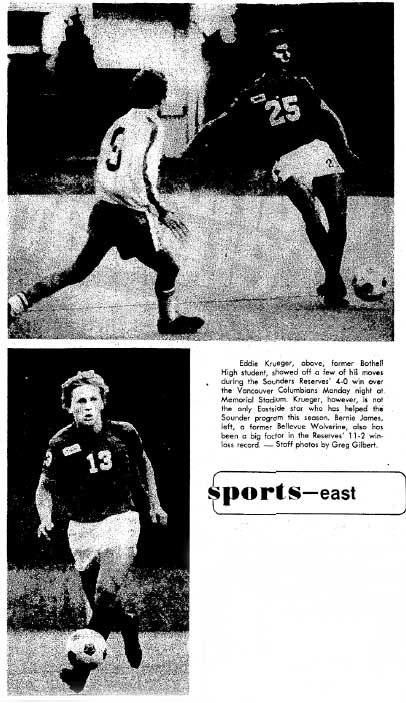 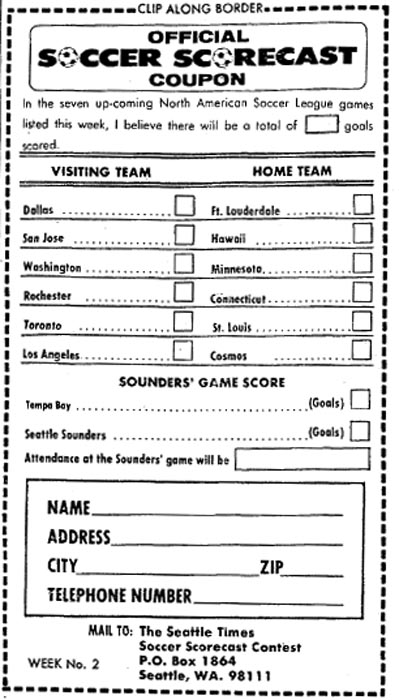 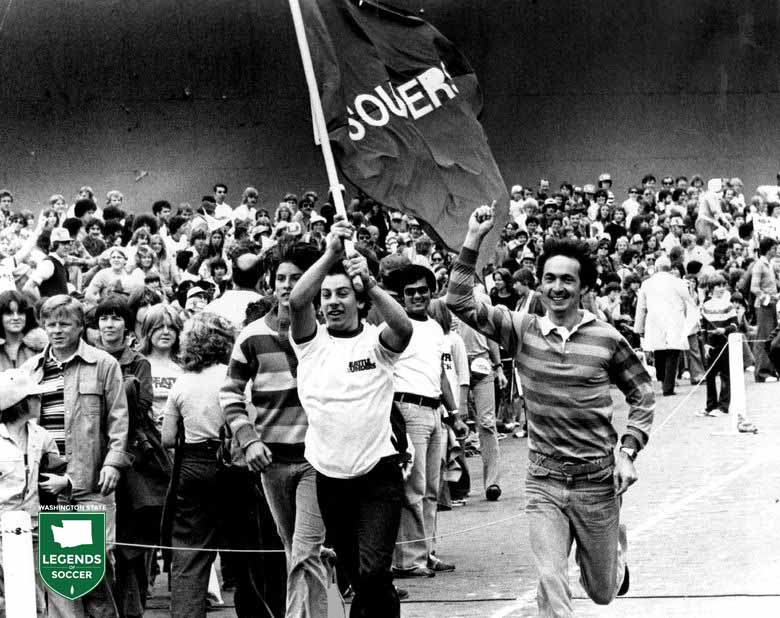 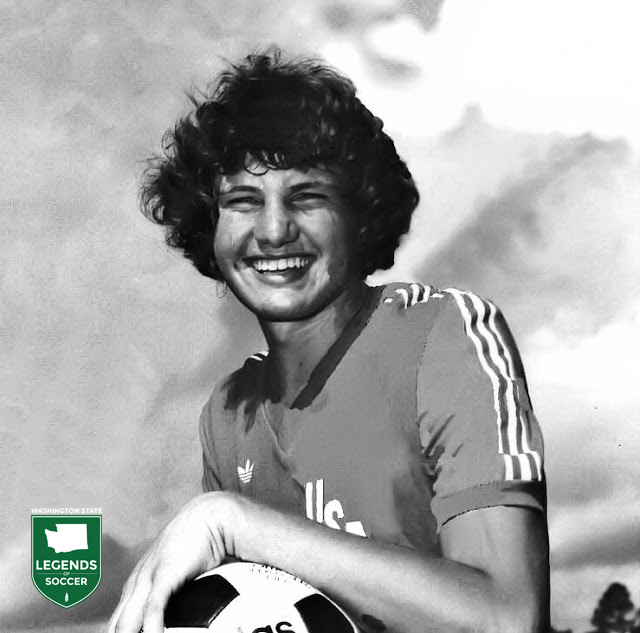 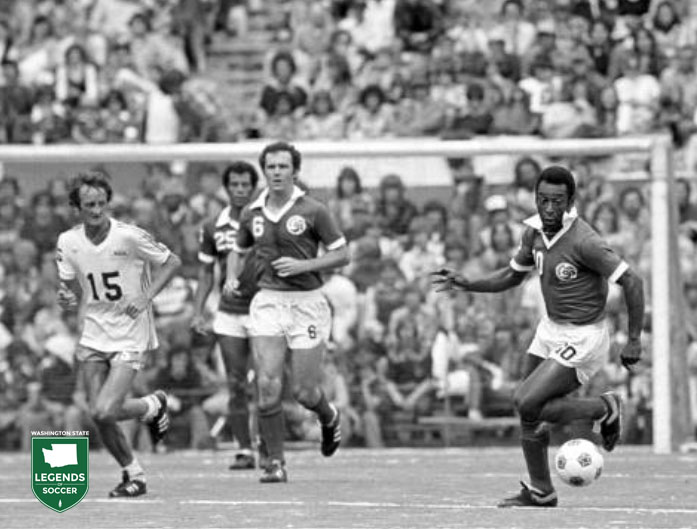 Seattle's Steve Buttle keeps an eye on Pele┤, far right, as the Cosmos' Carlos Alberto and Franz Beckenbauer look on. 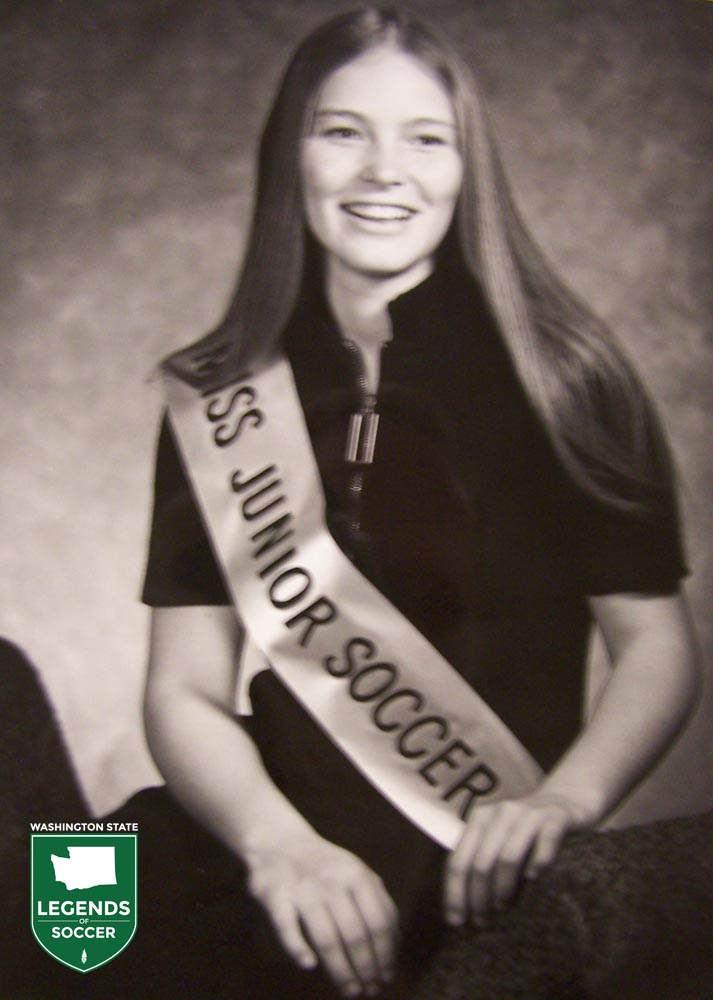 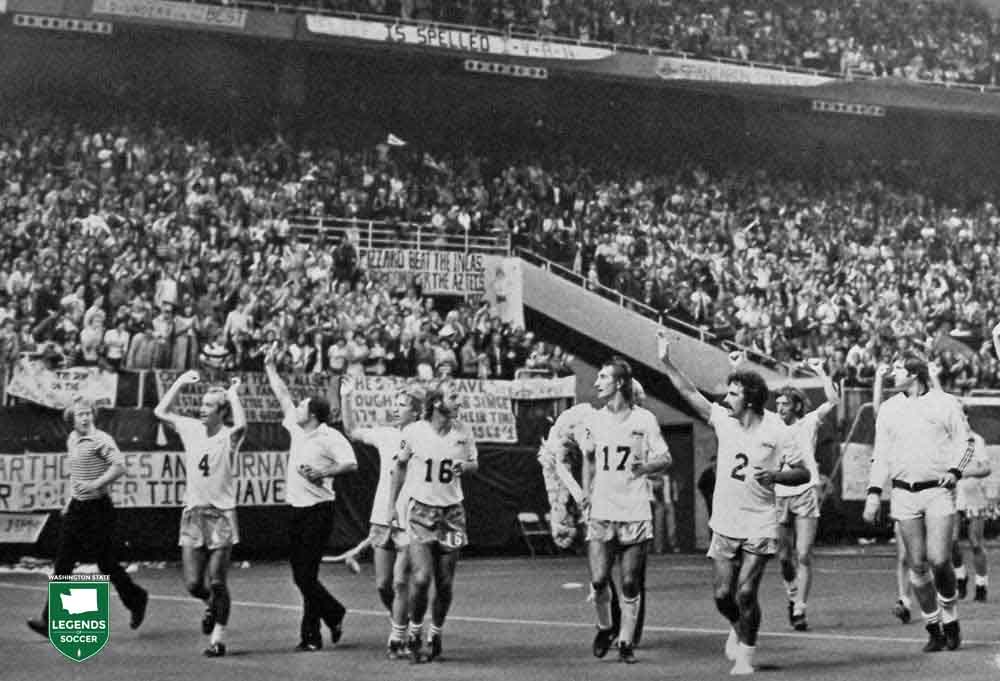 To the delight of more than 56,000, the Sounders take a victory lap after beating the Aztecs in the playoffs. 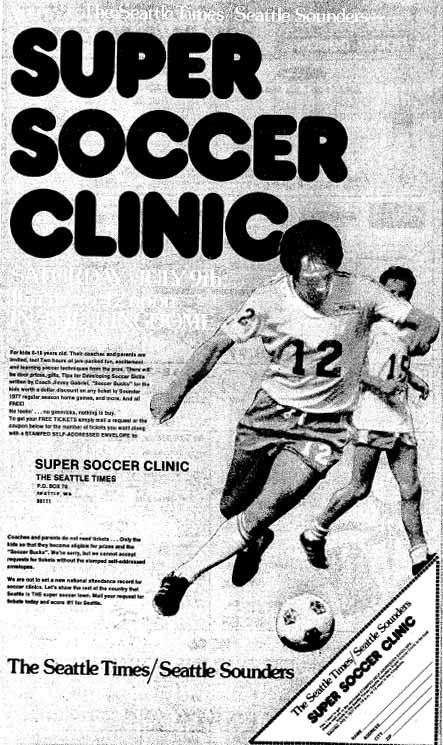 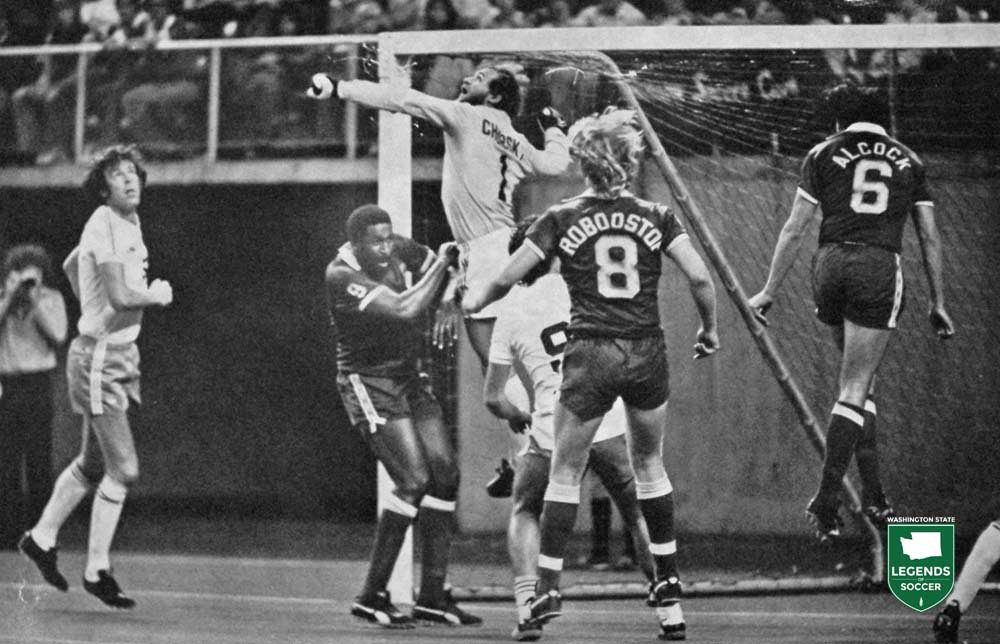 Tony Chursky rises to punch out a Portland cross to Clyde Best. 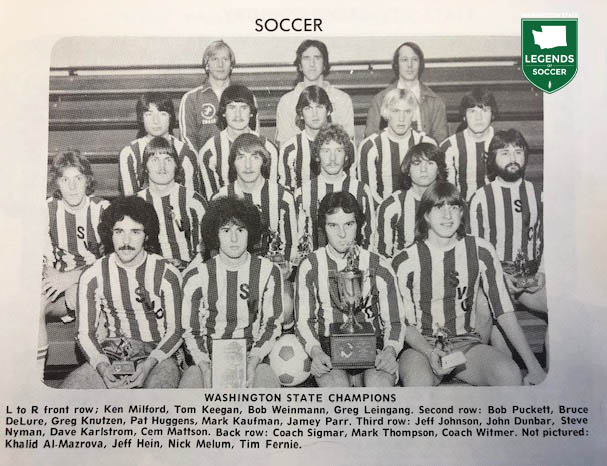 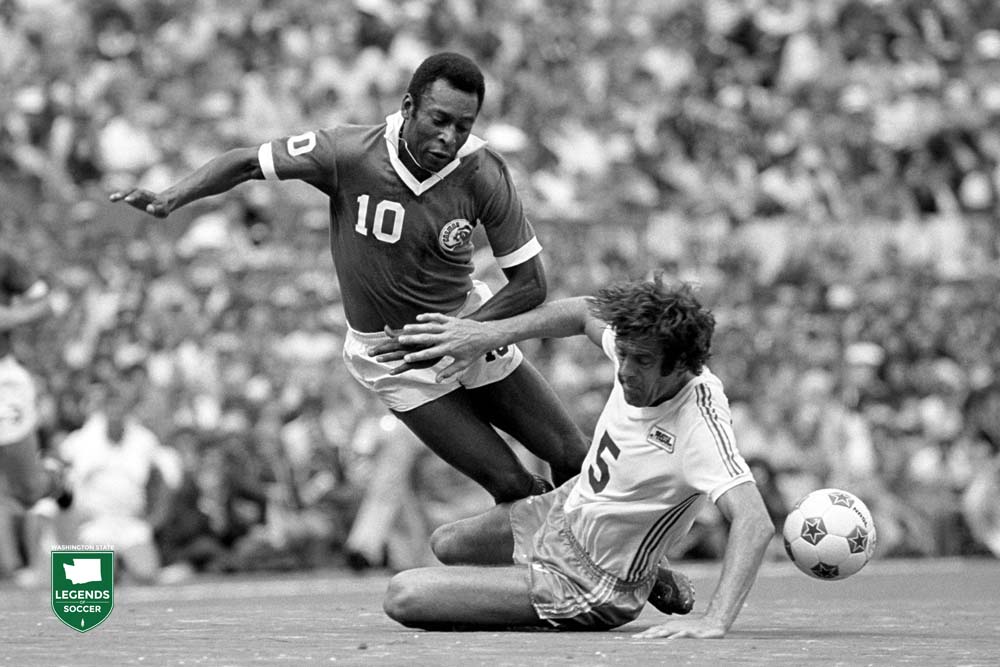 Mike England of the Sounders goes in for the tackle on New York's Pele┤. 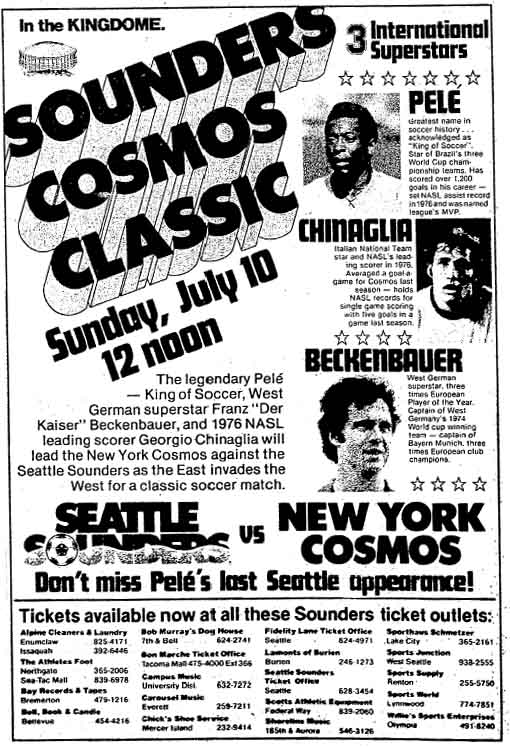 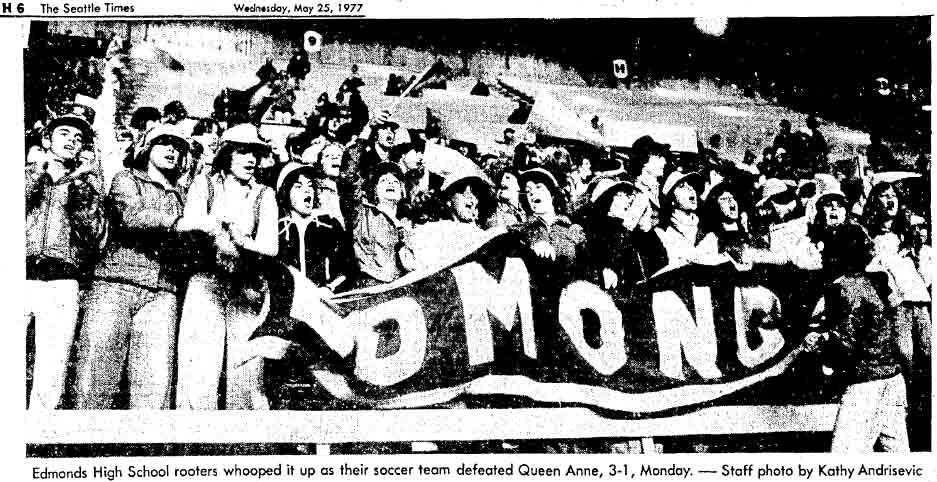 On this Day in History
KentÆs Shannon Higgins scores three goals to lead North Carolina to its third straight NCAA title, 4-1 over North Carolina State in Chapel Hill. Higgins, the Tar HeelsÆ leading scorer with 13 goals and 17 assists, is named the most valuable offensive player after four goals and two assists in the semifinal and final.
More from 1988 ›
Husky Soccer Stadium opens with the Washington women losing to Portland, 5-0. Two Washingtonians factored in the No. 3-ranked PilotsÆ romp. Wynne McIntosh of Seattle and Roosevelt High, scores twice on assists from Federal WayÆs Justi Baumgardt.
More from 1997 ›
Reign captain and midfield stalwart Keelin Winters announces her retirement, effective at the end of the season. Winters, 27, has anchored Seattle's defensive midfield for four seasons and, before that, the Sounders Women.
More from 2016 ›
FIFA technical group completes a weeklong inspection of Husky Stadium, which is included in U.S. bid for 1994 World Cup. Paul Stiehl, head of U.S. organizing committee, claims natural turf can be successfully laid over existing artificial surface. UW athletic director Mike Lude wants assurances that the sand, gravel and sod wonÆt damage the football field.
More from 1988 ›
© Washington State Legends 2020.