×
The Most Magical Magyar

The Most Magical Magyar

It’s no wonder the fans and future teammates were so anxious for Les Fabri’s arrival in Seattle. His credentials were impeccable, and he would spark the onset of a decade of dominance for his club. As it turned out, however, Fabri’s debut for Seattle Hungarians, while successful, was later stricken from the record.

On October 2, 1960, the Budapest-born Fabri ill-advisedly was run-out onto the dusty Lower Woodland pitch by manager Balint Ducz for the State Knockout Cup final before a big crowd versus Buchan Bakers. Fabri dazzled the fans, and his fellow debutante, Mike Kuczi, scored the game’s only goal. However, a few days later the outcome was reversed Fabri and Kuczi were confirmed ineligible, and Buchan was awarded the trophy.

There would be more cups for Fabri and Kuczi. Many, many more. Together, they would spearhead the first of seven state championships for themselves and the Hungarians the following spring. Beyond his lengthy and silver-lined career, Fabri’s highly stylized artistry left lasting impressions on just about everyone around the game. There is no more colorful character or attacking magician in state league history.

Leslie Fabri had already assembled some tall tales before setting foot in Washington that mild, early autumn afternoon. He and Kuczi were among the thousands of freedom-seeking Hungarians to flee the Soviet bloc in 1956.

A crafty winger for the army team in Hungary’s second division, Fabri was forced to escape when the Russians moved swiftly to put down the citizens’ revolution. He crossed the border into Austria, then England before reaching British Columbia. He played with Vancouver Hungarians while Kuczi joined Westminster Royals. In his second full season, Fabri totaled 15 goals in Pacific Coast League play. That, and some sparkling displays for the B.C. All-Stars against touring British clubs, attracted the attention of Ducz, who had designs of making his Seattle Hungarians a regional and national power. Both were induced to move south with the promise of a better job, plus some pocket money for playing.

In the prime of his career at 27, Fabri was clearly a step ahead of every defender in the state league. When he and Kuczi were finally cleared, officially, to play, Fabri scored twice in a 6-2 victory.

“He was better than anyone around here,” remembered Joe Smith, 50 years later. “He could do stuff with the ball he’d beat everyone (on the dribble), then come back and do it again.”

“He was as good as they get, a fabulous player,” recalled Robin Chalmers, like Smith, a state league veteran.

Often compared to George Best, then Manchester United’s mercurial forward, Fabri unfortunately brought along some of the same baggage as Best.

“Fabri was a very gifted player,” said Hungarians keeper Willi Lindner. He was a super quiet guy, tough to get to know. A lot of the Hungarians drank rather heavily. Fabri could be in a dead drunk and he’d still play better than anybody on the field.”

Remembered Mike Ryan, an opposing midfielder for Buchan, “He was one of the best. You couldn’t catch him. (But) he drank a lot of wine, and he showed up 10 minutes before one game eating a cheeseburger,” later adding that Fabri then scored two goals.

It was an unhealthy constitution, yet Fabri’s shelf life outlasted the Hungarians. After Ducz dropped out as sponsor, Fabri kept winning trophies. He was still a regular state league all-star when he finally bowed out in 1972, at age 37.

For more than a decade, Seattle Hungarians star Les Fabri was clearly a step ahead of every defender in the state league.

YEAR IN REVIEW
First Half Ends in Snow

Snow blankets the Queen Anne playfield but the Seattle Hungarians still manage to be creative and an attacking force in their final game of the first half versus Buchan. The Magyars, paced by a Larry Tamas brace, beat the Bakers, 4-2.

At long last, Lower Woodland Playfield will be lighted for night play. Seattle Park Board members vote for the installation of floodlights for the softball, soccer and football fields south of Green Lake. Earlier in the year, plans go forward with building a covered 4,000-capacity grandstand at Sealth High School in West Seattle.

Seattle Hungarians clinch the second half by outscoring Ballard Oil, 5-4, but it’s Buchan’s 2-2 draw with Loyal Realty that assures the Magyars of the title with a game to spare. After building a 5-2 advantage, Pete Ruhmor's hat trick made it close at the end. Meanwhile, the Vikings blow a 2-nil lead when Tom Robinson and Fridy Kristiansen bring the Bakers back level.

Loyal Realty retain their Northwest championship by beating Portland's German Club, 4-2, at Delta Park. Pat Brown leads the Vikings with two goals, with Sven Randeberg and Gudolf Kjaerhain adding the spares. It's the fifth NW title in 11 years for the Vikings.

A late goal from Ted Galvin gives Loyal Realty Vikings a draw with the Seattle Hungarians and an unbeaten (9-0-3) mark to finish the first half of the state league season at Lower Woodland. Galvin shoves the leather over the line with three minutes to go. Charlie Boyer's early goal put the Hungarians (8-2-1) in front early. Hundreds of curious fans come early for the doubleheader which features a Brazilian Navy selection facing a combined squad of Buchan and Seattle Kickers players. Pete Ruhmor's hat trick puts the hosts ahead to stay in a 4-2 result. The crowd is impressed by the Brazilians' short, quick passing game.

Hungarians Begin to Pull Away

Strikes by Gus Zoto and Karman Koteles lift the unbeaten Seattle Hungarians to a 2-1 win over rival Loyal Realty at Lower Woodland. With five wins in as many outings the Magyars are three points in front of Buchan.

Seattle CYO Cadet champion St. John's forces the Vancouver North Shore All-Stars to overtime before losing, 2-1, at Lower Woodland. Usually a two-leg competition knowns as the Oldershaw Cup, this edition scrubs the B.C. leg due to a conflict with the Grey Cup and is rebranded Catholic War Veteran's Trophy.

Seattle Hungarians exact some revenge on Loyal Realty with 4-1 thumping in Knockout Cup final at Lower Woodland before a sideline bulging of fans. Les Mueller snaps a 1-1 tie, sets up Charlie Boyer for a third, and then Mueller scores a second. In the undercard, a Ballard-Buchan mix beat Coquitlam, 8-4, with Fridy Kristiansen scoring four goals.

First-half winners Loyal Realty dig deep to defeat Seattle Hungarians in four overtimes, 2-1, at Lower Woodland for the state league championship. George Gyonosis gives the Hungarians the lead in the second half, but soon after Tore Vollen ties it by heading in a free kick. Hungarians forward Tibor Farkas nearly wins it with 25-yard effort against the crossbar in the dying seconds of regulation. The Vikings, playing with 10 men for the last 75 minutes, find joy in the fourth 15-minute overtime when Bjarne Heglie feeds Pat Brown for the winner.

League-leading Loyal Realty proves no match for a hungry and fully-loaded Hungarians squad at Lower Woodland. Les Fabri scores twice and assists on another as the Magyars rout the previously undefeated Vikings, 6-0, trimming the first-half lead to one point. Newly released from his football commitments, Les Mueller also scores.

“
It promotes better teamwork when the players get together off the field as well as on. Look at our team last Saturday:. Just two days after we formed the club, our team upset the Hungarians, 2-0.
— Newly elected Buchan Bakers president Willi Besmanoff on the benefits of a social club surrounding the Bakers
“
We’re really pointing toward the future. During Century 21, we’re planning to bring in some of the world’s greatest soccer teams to play our local squads.
— Newly-installed Washington State Football Association president Scott Mylie 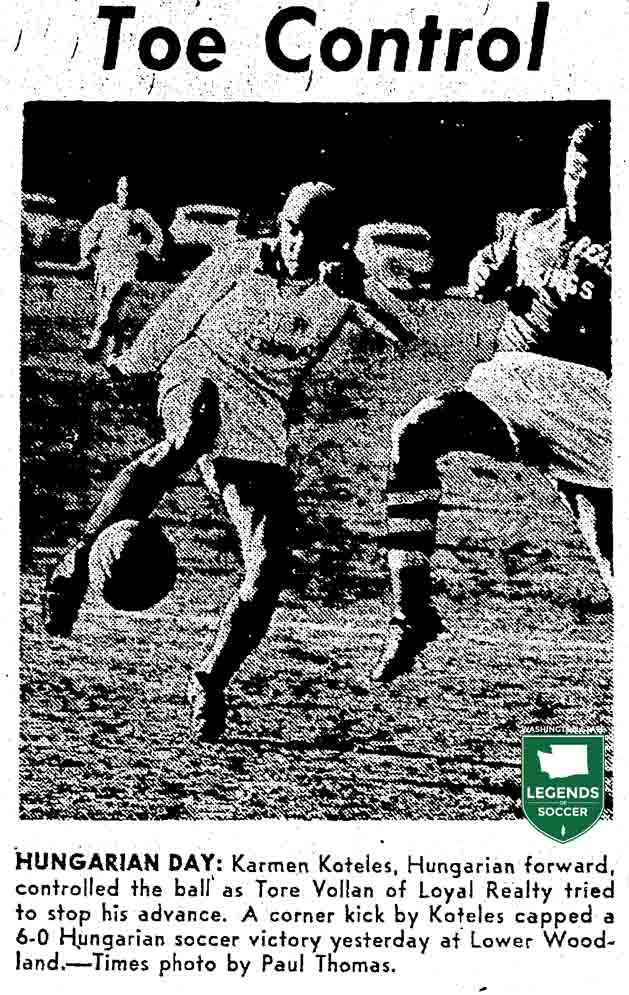 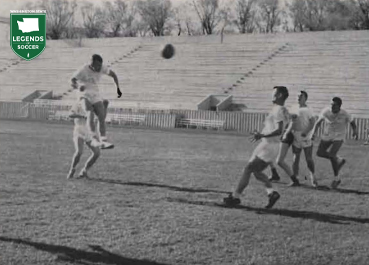 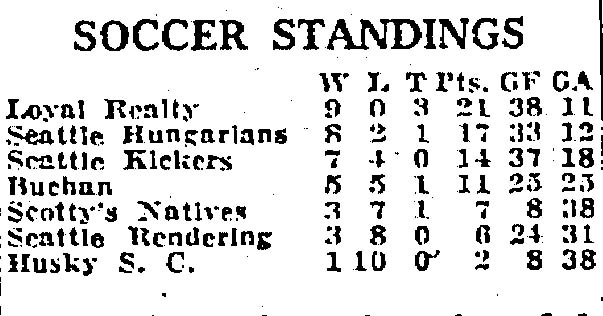 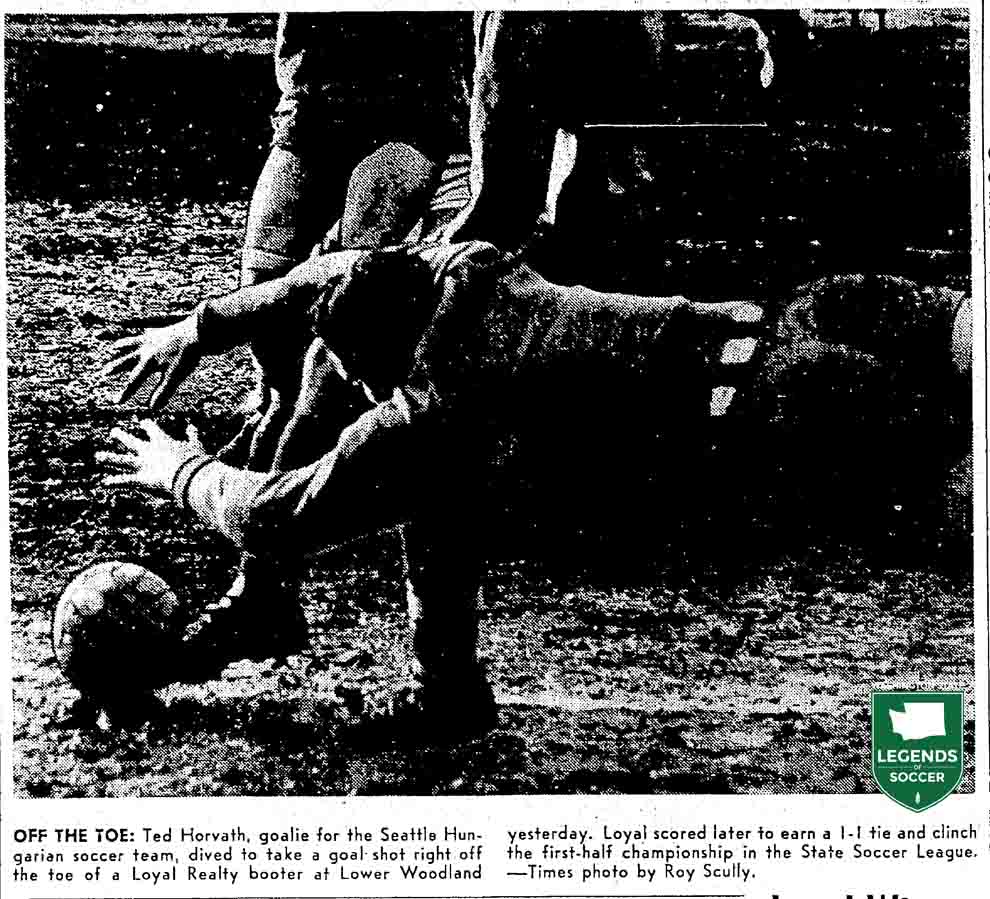 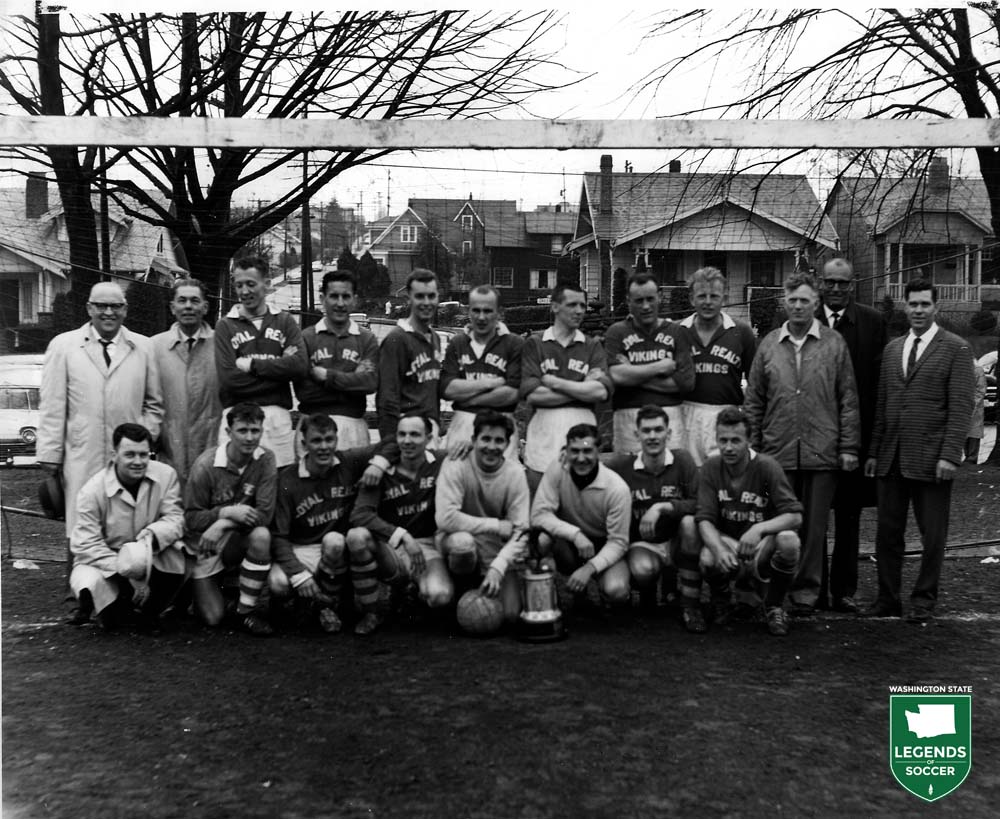 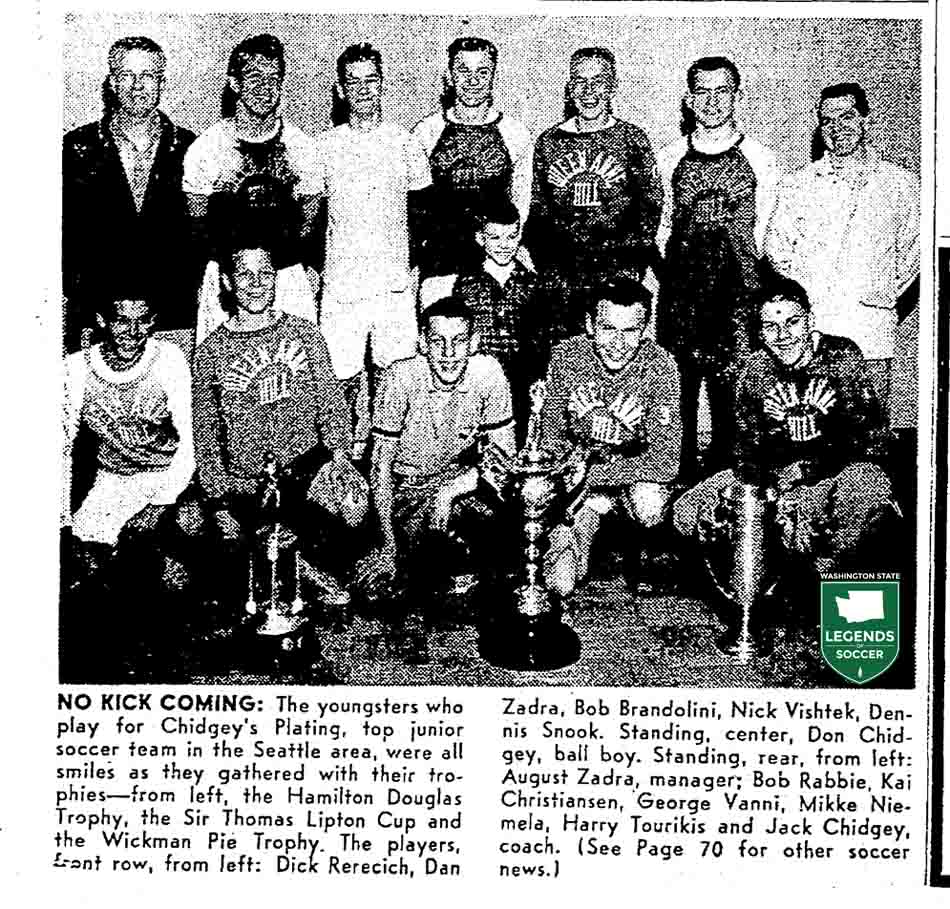 On this Day in History
Defending NCAA Division II champion Seattle Pacific stuns Div. I power Southern Illinois-Edwardsville, 2-1, at Husky Stadium before a nationwide TV audience. It is believed to be the first soccer match televised by ESPN, which became available to 618 cable companies four days earlier. Mark Metzger puts the Falcons on top of the No. 2-ranked Cougars after 23 minutes, and Mark Smith tallies 11 minutes later. SIUE star Don Ebert is sent off in the 78th. SPU goes on to reach the D2 semifinal while SIUE wins the Div. I title three months later. It's the second night of the Husky Classic. The Cougars routed host Washington, 6-0, the night before.
More from 1979 ›
Washington Interscholastic Activities Association announces that the boys' state AAA and AA quarterfinals, semifinals and final are moving from Seattle's Memorial Stadium. Bellevue's Sammamish High School will now host. The reasoning: Sammamish's new turf and wider field is more suited to soccer. Memorial has hosted the final since the WIAA tournament's inception in 1975.
More from 1990 ›
Hope Solo is allocated to St. Louis of Women's Professional Soccer (WPS) ahead of the league's inaugural season. Solo is reunited with former UW teammate, forward Tina Frimpong Ellertson, also an allocation from the USWNT. Spokane's Amy LePeilbet is drafted by Boston with the fourth overall pick Oct. 6. Serving as the seven-team WPS Commissioner and CEO is Everett native Tonya Antonucci.
More from 2008 ›
A yet-to-be-named women's professional league will launch in spring 2013 in eight cities, including Seattle. Bill Predmore, president and founder of digital marketing agency POP, will own the team. "Seattle has a long history of enthusiastic support for professional soccer, which we hope will provide us with a strong base of fans for the new women's club," says Predmore. Sounders Women, which did not pay players, will continue operating a W-League team.
More from 2012 ›
© Washington State Legends 2023.