×
The Challenge: Washington Joins the World

Two-time British Prime Minister Winston Churchill dies at 90. More U.S. combat troops begin fighting in Vietnam, numbering 190,000 by year end. Dr. Martin Luther King and more than 2,600 others are arrested in Selma, Ala., during peaceful demonstrations against voter-registration rules, and President Lyndon Johnson signs medicare into law. In Washington, Interstate 5 from Everett to Seattle is completed. Ivar Haglund begins Fourth of July fireworks over Elliott Bay. Known as the Seattle Rainiers since 1938, the city's PCL team is rebranded as the Angels.

The Challenge: Washington Joins the World

When the Northwest League endorsed formation of the U.S. Soccer Federation and then formally affiliated with the national governing body in 1914, Washington effectively became a member of world football. Yet for the next 50 years, the ties between the federation’s Manhattan headquarters and the state, located some 3,000 miles west, were tenuous at best.

Aside from updates on rules or the occasional check on the player’s registry, there was scarce interaction. There was the time a local national team candidate was encouraged to attend a tryout, only to learn that the squad had already been chosen. When Washington’s first two inductees to the National Soccer Hall of Fame were enshrined, proxies accepted on their behalf at ceremonies back east.

Finally, in 1964, a convergence of factors finally bridged the gap, from the Empire State Building to this seemingly wilderness outpost, and Washington’s soccer community took the first steps toward meaningful affiliation with the greater world. Each of those factors were rooted in what was happening in the Pacific Northwest’s largest city.

Postwar Seattle was bustling, about to break free of a perception that it was merely a provincial enclave. Boeing had diversified from to constructing military bombers to giving flight the 707 passenger jetliner. As the 1960s dawned, U.S. commercial air travel was taking off. Furthermore, Seattle’s Century 21 World’s Fair not only raised the collective consciousness of the state and Puget Sound, its ability to draw 9.5 million visitors instilled a newfound confidence in the inhabitants.

One of those Seattleites was a baker and confectioner who loved soccer and dreamt of his hometown club putting Washington soccer on the map. Balint Ducz, whose bakery supplied pastries to United Airlines, used some of that dough to create the Seattle Hungarians and lure his talented, refugee fellow countrymen to form the most entertaining and successful side the state had ever seen.

To prove that point, Ducz dug further into his pockets and made the Hungarians the first Pacific Northwest team to enter the National Challenge Cup. Until 1953, the forerunner of the U.S. Open Cup was far from national in scope no club from west of Missouri had seen, much less held the Dewar Cup. By 1958, however, a southern California club won it. Ducz, who had just founded his Hungarians, no doubt took notice.

Now, in the 1964-65 season, with widespread jet travel effectively fueling his passion project, Ducz paid some $3000 (adjusted for inflation to $27,000 in 2022) to twice take the Magyars to California for matches via charter flights. They reached the second round, and a year later advanced to the West finals.

As The Seattle Times stated, it was all worth it. “Balint Ducz’s wallet will be considerably thinner,” wrote Vince O’Keefe. “But if the Seattle Hungarians come through, Ducz will feel rewarded. It isn’t easy paying for these junkets, but the Hungarians are determined to put Seattle on the national soccer map – even if they have to live on Balint ‘s doughnuts and taffy.”

1965: The Challenge: Washington Joins the World

Beginning in the winter of 1964-65, Washington senior teams begin competing in national competitions.

With an unsatiated hunger for goals, Seattle Hungarians approach the holiday break on a rampage. Boosted by the addition of Geoff Wall, who scores four goals, they bomb Olympia, 10-1, to stay three points in front of Continental. Larry Tamas adds a hat trick for the Hungarians (9-0-1), now totaling 66 goals from 10 matches. Les Fabri also scores four for United Hungarians in an 8-2 demolition of Buchan.

Two months after playing their protested U.S. Amateur Cup match, Fort Lewis and its opponent in that match, Denver Kickers, are disqualified from the tournament. The Soldiers, who lost but initially won a protest because Denver used an ineligible player, are discovered to have themselves used 17 non-registered foreign nationals.

Vancouver's North Shore All-Stars retain the Oldershaw Trophy when they complete a sweep of the series at Lower Woodland. North Shore, which had beaten the Seattle CYO All-Stars in the first leg, win 3-2 (5-2 on aggregate).

Reclaiming their throne after a two-year absence in the PCL, Seattle Hungarians are crowned Northwest champions for a third time by beating Portland's Steinhaus Kickers, 3-1, in overtime at West Seattle. Steinhaus's Willie Heckel wipes out Steve Furjesi's opener to force extra time. Tommy Major and Alex Lennox deliver in overtime.

The Washington Huskies slide to a fifth straight defeat in the season's final game. Portland beats UW, 3-2, at Union Bay Field. Players represent 10 countries in all, from six continents::, including Australia, Canada, Ecuador, England, Iceland, Lebanon, Nigeria, Norway and West Germany. Some of the Europeans are members of the varsity ski team. Among the Americans are eight in-state residents.

A chaotic match between Seattle Hungarians and Continental is abandoned after 52 minutes when the latter team abruptly leaves the Lower Woodland pitch. The first half is marred by vicious tackling and repeated protesting of officials' calls. A fight results in ejections for both sides. Steve Furjesi beats an offside trap to put the Magyars ahead, and when Tommy Major converts a penalty, there are more protestations, resulting in a second Continental and their manager to be sent off. The whole team followed.

B.C. Sugar is Sweetest in Five-a-Side

B.C. Sugar of Vancouver successfully defends its title in the 22nd annual Seattle Five-a-Side at West Seattle. Sugar's Brian travis scores the only goal in the 1-0 victory over Seattle Hungarians in the final. The Canadians had come from 3-nil down to beat Fort Lewis in the semifinals. The Hungarians had dominated their first four games and held the tiebreaker in corners (2-1) prior to Travis's last-minute score. A record 32 teams from Portland to Nanaimo take part.

Fort Lewis informs state officials that they cannot continue play due to increased military commitments to the ongoing war in Vietnam. All results involving the Rangers (they were tied for third at 5-3-0) are expunged, and some remaining players find new teams, such as player/coach Geoff Wall with the Hungarians and Constantine Tagios with Continental.

Geoff Wall's Fort Lewis stuns Seattle Hungarians, handing the Magyars their worst loss in their seven-year existence in the state league and Pacific Coast League. Constantinos Tagios hits for four goals and player/coach Wall adds two more in an 8-3 hammering on the base. After the Hungarians take a 2-nil lead in the first 15 minutes, the cohesive team play of the Rangers takes effect. It's 3-2 by halftime, and Tagios scores three times in the second half.

Seattle Hungarians sponsor Balint Ducz applies to rejoin the Pacific Coast League for the following (1965-66) season, provided Interbay Field is open. The Hungarians, who lacked a suitable facility in their initial PCL two-season run, have dominated the state league since their return, going 16-1-1.

Derek Mallinson, 40, is named UW soccer coach just 10 days prior to the first game, at home against Skagit Valley College. The Huskies' first three seasons were guided by Ron Jepson, who was attending graduate school. A native of England, Mallinson also coaches youth on the Eastside, and he’s president of Lake Hills SC.

Fort Lewis takes over first place in the state league following a 7-0 beating of Buchan, coupled with Loyal Realty's 3-1 loss to Seattle Hungarians. Geoff Wall nets a hat trick for the unbeaten Rangers (3-0-2). Goals from Tommy Major and Les Mueller in the final five minutes are the difference for the Hungarians.

One of the most competitive campaigns in state league annals ends, not surprisingly, with favorites Seattle Hungarians returning to the throne. The Hungarians (10-1-1) defeat Buchan, 3-1, at West Seattle to overtake idle Fort Lewis (9-1-2), the only side to defeat them. By winning the second half, the Magyars, who won the first half as well only to battle injuries and fatigue from involvement in the U.S. Challenge Cup, can dispense with any playoff for the overall title.

Seattle Hungarians score first but cannot hold on in San Francisco, losing a regional semifinal to Greek American AC, 2-1, at Balboa Park. The visitors go in front when John Phelps chips the keeper in the fourth minute. But the Greek Americans dominate the second half, tying and then winning on Jim Frame's drive from 15 yards in the 50th minute.

The fourth annual exchange of youth players from Washington and British Columbia continues to grow. Ten B.C. teams visit the Eastside of Lake Washington, and just as many teams head north on the first of three successive exchange weekends. Over a thousand boys now play on the Eastside.

“
It isn’t easy to pay for these junkets (to California), but the Hungarians are determined to put Seattle on the national soccer map – even if they have to live on Balint’s (Ducz, club sponsor) doughnuts and taffy.
— Vince O'Keefe, Seattle Times columnist, on the entry of Seattle Hungarians into the National Challenge Cup
“
I have kicked field goals both ways with the side of the foot and with the toe. The soccer-styled kick is better. You can get much more force and snap because you use the whole side of the foot instead of a pointed toe. We European boys have kicked that way all our lives.
— Hungarians forward and B.C. Lions football player Les Mueller on the advent of NFL soccer-style kickers 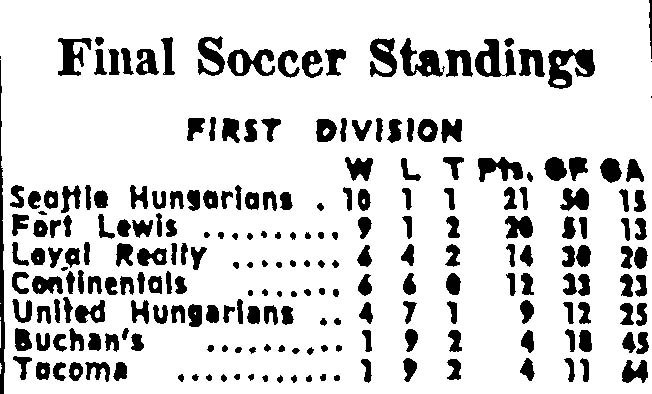 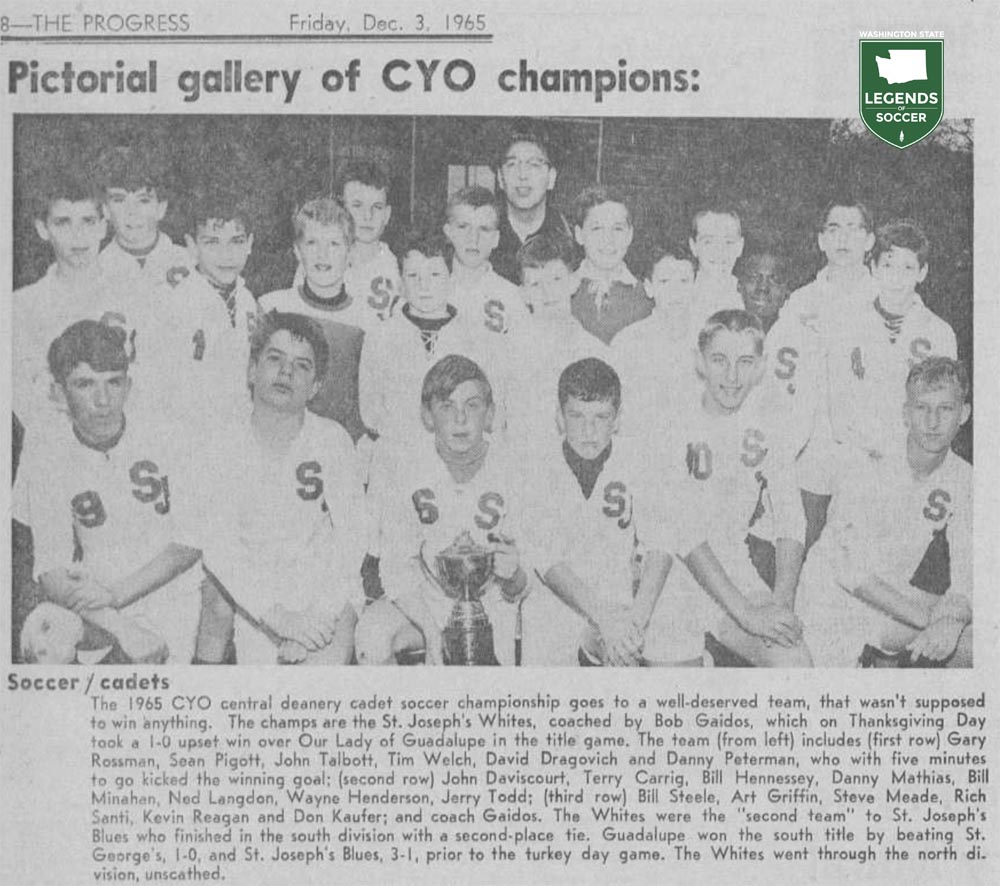 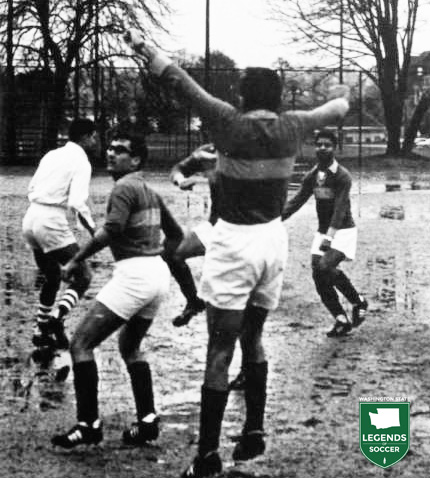 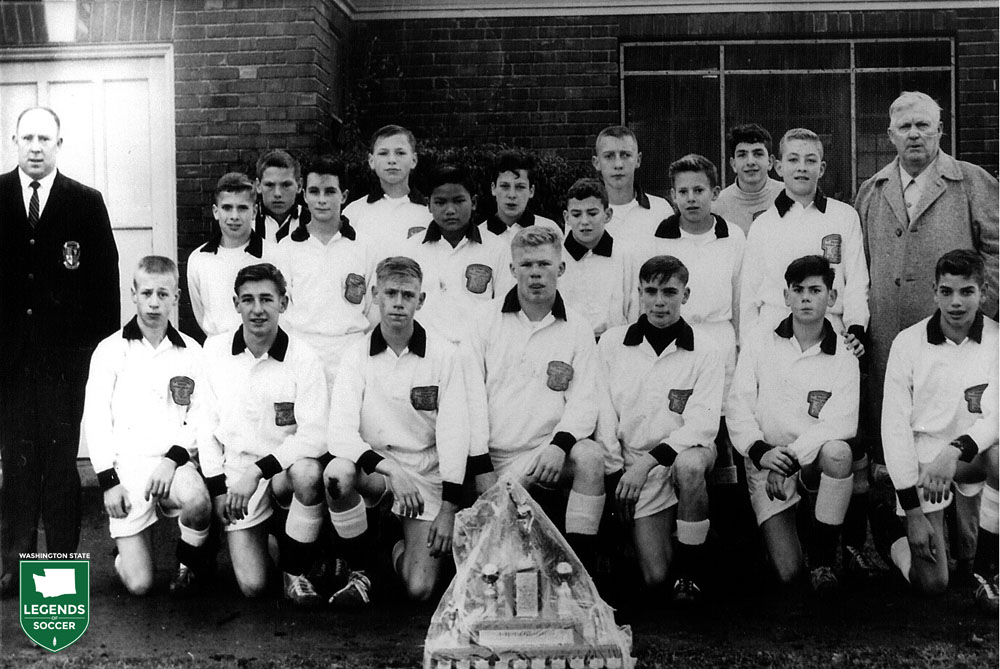 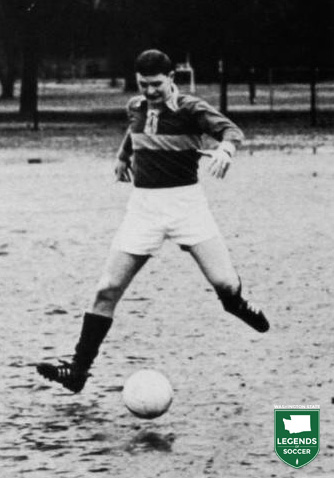 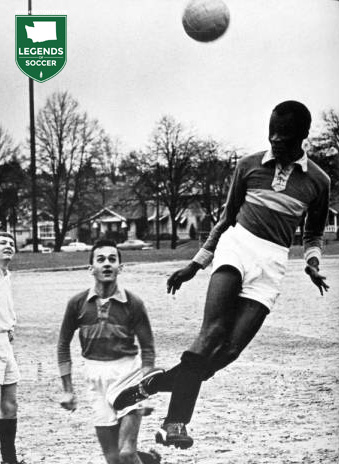 On this Day in History
Two late goals lift Western Washington to a 2-1 comeback victory over Seattle University at Civic Stadium for the Vikings' first GNAC championship. Paul Nissley delivers the game winner, his league-leading 15th goal of the season, in the 84th minute off an assist from Gus Zadra. The defending champion Redhawks play without two of their top three scorers. Although Western wins its final seven games, they miss making the postseason. Cal State Dominguez Hills, which WWU beat earlier, is given a berth. Nissley, a sophomore from Mount Vernon is voted GNAC player of the year and Travis Connell is coach of the year in his second season.
More from 2002 ›
Morgan McCoy’s goal in the 3rd minute of overtime lifts Washington into the second round of the NCAA tournament with a 2-1 home win over Stanford. Jason Boyce had staked the Huskies to a 1-0 lead.
More from 1997 ›
Geoff Aunger strikes 2 minutes into overtime as Sounders rally late to tie and beat Milwaukee, 2-1, for their sixth straight win.
More from 1997 ›
Jack Goldingay is presented the prestigious Charles E. Sullivan Award by the Puget Sound Sportswriters and Sportscasters Association for his contributions to athletics. Goldingay is recognized as the founding father of youth soccer on the Eastside as well as the Canadian Exchange program. The Birmingham, England native always looked out for the "little guy" and engaging "the odd man out."
More from 1970 ›
© Washington State Legends 2023.