In a bold series of moves, the resident club in the City of Destiny determined it was time to go for it. Midway through their third season, the Tacoma Stars seized the moment and made some historic moves to rise above the rabble.

In a span of 10 days, the Stars jettisoned their coach, traded the top scorer and broke open the bank to acquire the biggest star in MISL history. Up to that point, Tacoma had trudged along, 27 games under .500. Bob McNab had been named head coach, then demoted, then promoted – all with little effect. Finally, follow a 2-12 stretch, president John Best began flipping switches.

Alan Hinton, with a history of guiding teams to the playoffs, including the Sounders from 1980-82, was a known quantity to several members of the team and the existing and potential fan base. During the first two seasons, the Stars had averaged just over 6,000. That number would rapidly rise with the arrival of Steve Zungul.

The Serbian striker was a five-time scoring champion, three-time MVP and, moreover, a five-time MISL champion. Together with Preki, Tacoma’s emerging starlet, Zungul, 31, was envisioned as the key to the Stars’ quest of winning titles. The Lord of All Indoors did not come cheaply.

Zungul, whose 516 career goals and 840 points far outnumber those of any MISL rival, cost $200,000. He reportedly receives a $150,000 signing bonus on top of $200,000 annual contract. The Stars are 12-17 prior to the deal, after which top scorer Dale Mitchell is traded. Zungul would proceed to win yet another scoring championship and MVP award.

During the final two months of the regular season, Tacoma plays over .500 (11-8) to earn a playoff berth. An upset of Wichita leads to a semifinal series with defending champion San Diego. Despite being eliminated by the Sockers, it’s clear the Stars have become a regional attraction, averaging 16,505 in their four home postseason dates, including 19,476 in their final outing. It was a trend that would carry-over into 1986-87, in which they started 12-2 and averaged near 10,000.

There was also a key change to for FC Seattle Storm. Jimmy Gabriel, the onetime Sounders captain and head coach who had been integral to forming the club and played for its state league forerunner, departed at the end of the season. His next stop: England and joining Harry Redknapp at Bournemouth.

One local side with a championship tradition, Seattle Pacific, would burnish that reputation. The Falcons, despite a relatively slow start, got stronger down the stretch and became the first NCAA Division II program to repeat as champion. SPU pulled over 4,100 to Memorial Stadium for the 4-1 victory over Oakland (Mi.). That was the second-largest collegiate attendance. The third and final edition of The Big Kick (NCAA Division I championship) draws 4,652 to the Tacoma Dome after two years at the Kingdome.

After two middling seasons, the Tacoma Stars ownership goes all-in, changing coaches and acquiring the Lord of All Indoors.

Cliff McCrath, Seattle Pacific coach, is presented the NSCAA Honor Award in St. Louis. McCrath is coming off a third NCAA championship at SPU, and he has also served as NCAA Rules Committee Secretary-Editor.

Tacoma native Brent Goulet scores the 107th goal of his career, believed to be a collegiate record, in Warner Pacific College’s 3-0 win over Pacific (Ore.). Goulet surpasses the 106 of Erskine’s Sam McGinty, set in 1970.

After a stretch in which the Tacoma Stars (11-16) lose 12 of 14 games, they fire coach Bob McNab for a second time, and hire former Sounders coach Alan Hinton. Although Hinton and Stars president John Best have had troubles working together previously, those teams also won. In Vancouver, the Whitecaps had a 24-6 record and their attendance more than doubled from the previous year to 26,000. When Best joined the Sounders as general manager in 1982, the club was 4-9 and Hinton wound up guiding them to the Soccer Bowl.

SPU Topples No. 1 Team on Road

Highline’s Pepsi Stompers claim an eighth state cup title in 10 years, winning a second consecutive girls U19 championship while Federal Way’s Cheetahs earn a fourth championship in six seasons, this time the girls U15. The Cheetahs have already begun fundraising $50,000 toward becoming the first U.S. youth team to visit China, June 27-July 14. They will play three games and also participate in clinics and cultural exchanges.

Night of Champions Goes to UCLA

Defending Division I champion UCLA, unbeaten in 24 games, visits defending Div. II champ Seattle Pacific for an exhibition. The Bruins win, 2-1, before 3,100 at Memorial Stadium after the Falcons’ Scott Cairns is sent off. Shaun DelGrande deflects in Paul Caligiuri’s blast in the 44th minute.

Seattle’s Joan Dunlap-Seivold scores in her U.S. National Team debut vs. Canada (2:0) at Blaine, Minn. Dunlap-Seivold was named to the team by Anson Dorrance, her collegiate coach at North Carolina, where she had been a 1984 second team All-American. It was Dorrance’s first game as USWNT coach and the first meeting with Canada. Three other Washingtonians play: Sharon McMurtry, Lori Henry and Cindy Gordon.

Big Kick III, the NCAA Division I championship game in the Tacoma Dome, is won by Duke, 1-0, over Akron. It’s the first NCAA championship for the Blue Devils in any sport. Duke features Everett’s Jason Weighter and Hermann Trophy winner John Kerr. Only 4,652 (8,000 had been projected) attend, and coaches of both teams criticize the artificial turf.

Tacoma clinches its first round series in four games (3-1), by beating the Wichita Wings for the third straight game, 3-2 before 17,094.

Tacoma’s Brent Goulet, a junior at Warner Pacific, starts in his U.S. National Team debut vs. Canada (0:0) in Miami.

John Polzin’s goal with 15 minutes left lifts Western Washington to a shocking 1-0 home win over Washington. John Reilly posts the shutout. “This is probably the biggest win in the history of our varsity program,” said Bruce Campbell. The Vikings had not beaten the Huskies since their formative club days, in 1974.

Betty Ellis, a grandmother and first female to officiate a U.S. professional game in 1980, coaches Tahoma girls to state AA title, 2-0 over Edmonds after upsetting undefeated Mountlake Terrace, 5-1, in the semifinal. Stephanie Johnson scores both Tahoma goals in the final. Federal Way wins girls AAA title over Issaquah, on penalties (0-0 4-3).

Two members of the Tacoma Stars, Bob Lenarduzzi and David Norman, start for Canada in its World Cup opener, a 1-0 loss to France in Leon, Mexico.

A record crowd of 19,746 in the Tacoma Dome sees the Stars eliminated in the MISL semifinals in four games (3-1) by eventual champion San Diego, 8-5.

Stars Streak Out of the Gate

Tacoma wins a record eighth game in a row, 7-6 over Wichita, behind two goals apiece from Steve Zungul and Godfrey Ingram. Stars avenge their opening-night defeat, the only blemish in their first nine games.

U.S. Youth Soccer West regionals begin at Redmond’s Sixty Acres with Gov. Booth Gardner serving as honorary tournament director. Over 1,100 hotel rooms are booked on the Eastside. Over 200 volunteers are enlisted to work event operations. Some $100,000 in costs are covered through vendor exhibit fees and concessions.

Mexico's World Cup begins, and Puget Sound area residents are able to watch 42 of 52 games via Group W Cable’s Channel 29, a public access channel. All audio is in Spanish.

A fireworks rocket shot into Memorial Stadium sparks an early morning (1:40 am) fire that causes $100,000 damage to the playing turf. Consequently, FC Seattle is forced to move its remaining four home games to Renton Stadium.

Jefferson’s Jimmy Weber connects on a header 8:48 into overtime for the Raiders’ fourth straight Class AAA state championship at Memorial Stadium. The 3-2 win over Mead is Jefferson’s 78th game without a loss. TJ lost 30-goal scorer Ray Hoff to an injury in the 11th minute.

After reaching the women’s national final for the third year in row, Tacoma’s Cozars fall to Virginia’s Wild Fires, 3-1, in overtime in St. Louis. Lisa Boyer put Cozars ahead in the 28th minute. Five members of the Cozars are chosen for the U.S. National Team’s trip to the Mundialito in Jesolo, Italy: Gretchen Gegg, Lori Henry, Joan Dunlap, Cindy Gordon and Michelle Akers.

Steve Zungul, MISL career leader and five-time scoring leader, is acquired by Tacoma from San Diego. He debuts Feb. 7 and scores his first goal against the Sockers, his former team, Feb. 9.

“
It's a new challenge for me, to help get this team into the playoffs. This team wants to be a champion. In the future it can become a champion, in the long run. I'm like a missionary. I live for the game. I want to leave something to those future soccer players.
— Steve Zungul, after joining the Tacoma Stars in midseason
“
Peter Hattrup is the best player to come out of college in the last 10 years, in my opinion. He not only has the ability, but he has that confidence. Some would call it arrogance, but I like that in a player. Most rookies come in here quietly and go off somewhere by themselves. Not Peter Hattrup. He's walked right in there, in the middle with the (Steve) Zunguls, everybody.
— Stars coach Alan Hinton after selecting the Seattle Pacific star No. 4 overall in the MISL draft
“
At least they will all be Americans when they get going. That was a big complaint when I was here last time, about the foreigners and the fact the team was changing year to year. Fans couldn't relate to new teams every year.
— Former Sounders sweeper Nicky Reid, after his touring Manchester City team defeat FC Seattle
“
At times, it looked like a ping pong match, the ball went so fast.
— Duke coach John Rennie after Blue Devils win Big Kick on Tacoma Dome's artificial turf
“
Federal Way has great youth programs, and the parents and coaches really get into it. I had 10 players last year who played for Goalpost and they won the U16 national title a couple years ago.
— Jim Judson, Thomas Jefferson coach, crediting community support for the Raiders’ 78-match (74-0-4) unbeaten streak
Collegiate Men's Records
Collegiate Women's Records
State Youth Recreational Cup Winners
Washington State Youth Champions
WIAA Championship Games 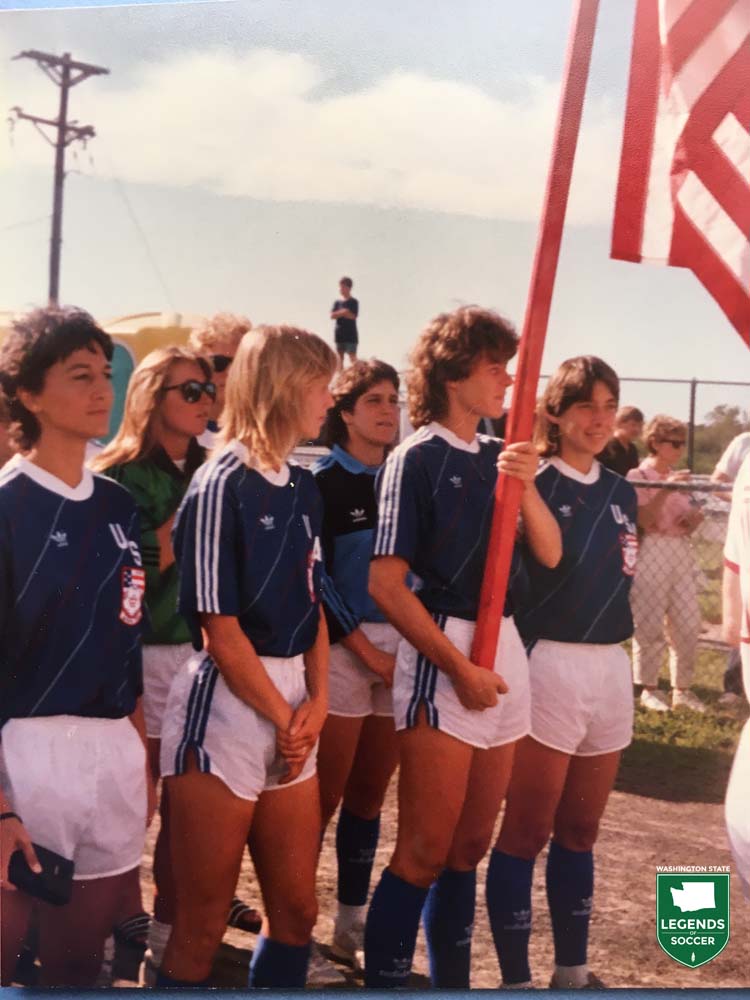 Sharon McMurtry, bearing the flag, was chosen as U.S. National Team captain for the 1986 North America Cup, a series vs. Canada in Blaine, Minnesota. To the left of McMurtry are Joan Dunlap and Gretchen Gegg, and to her right is Lori Henry. (Courtesy Sharon McMurtry) Ann (?), Kim Wyant, Joanie Dunlap, Gretchen (Zigante), me, Laurie or Lauren (?). 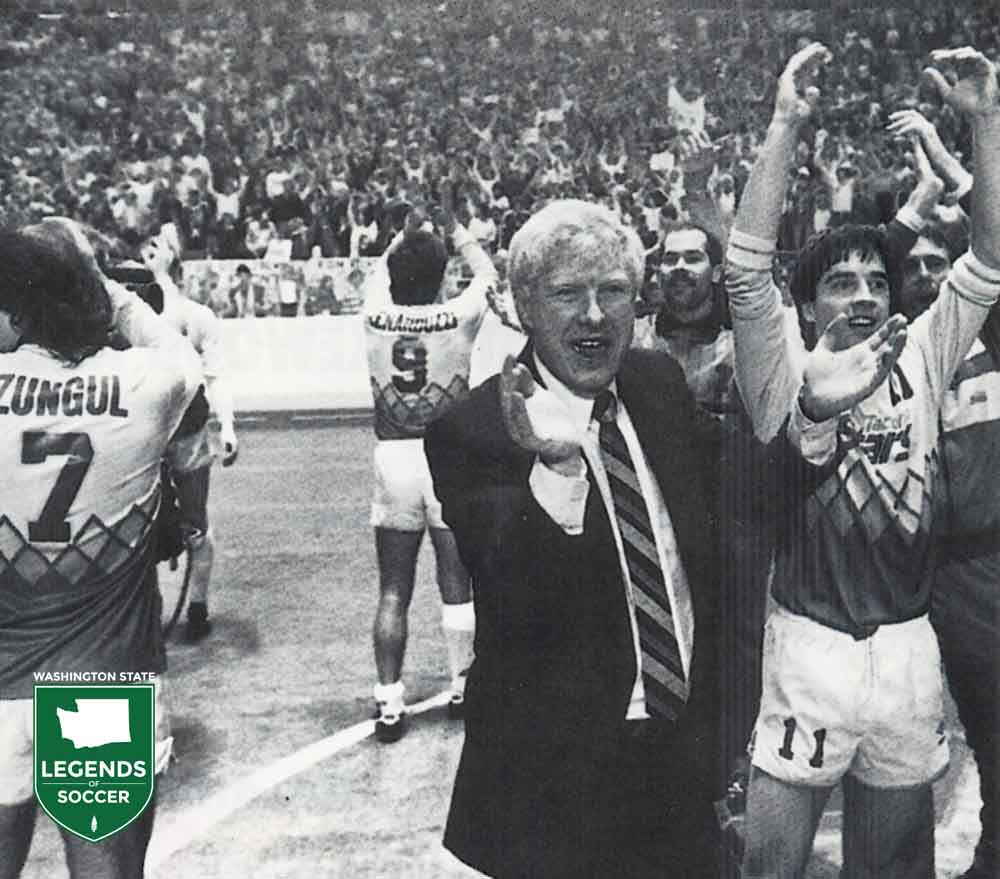 Steve Zungul, Preki and Alan Hinton had the Tacoma Dome crowds large and loud by the end of the club's third season. 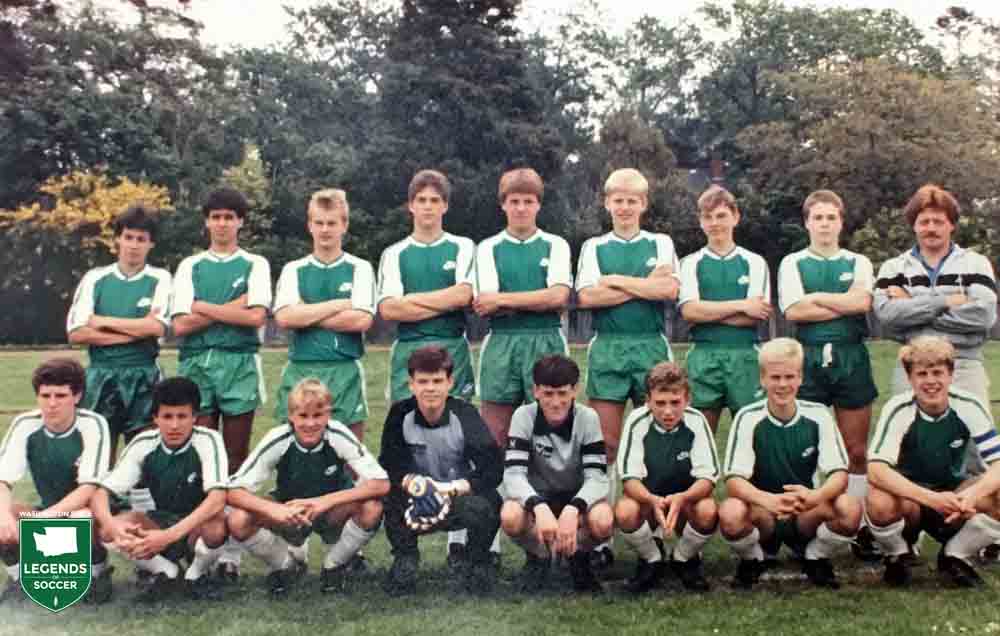 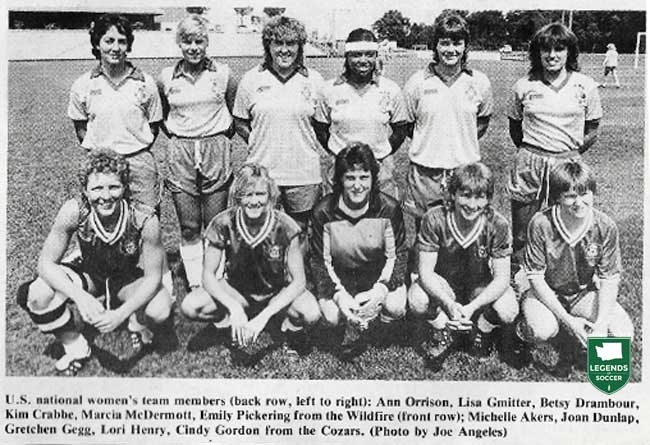 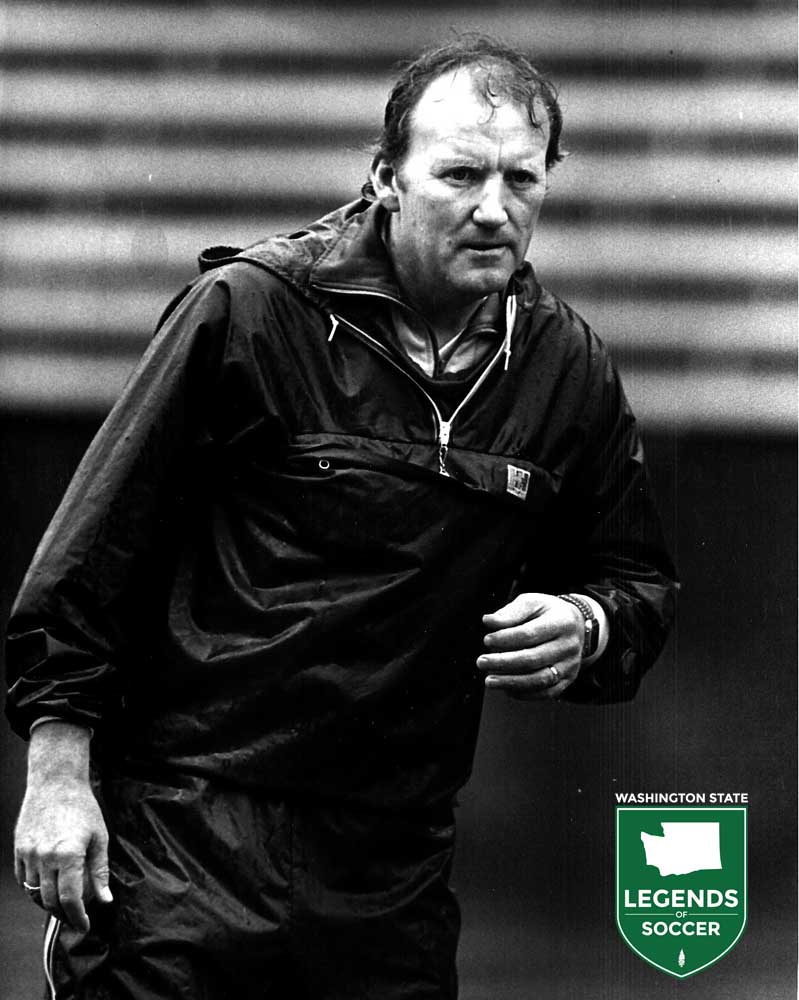 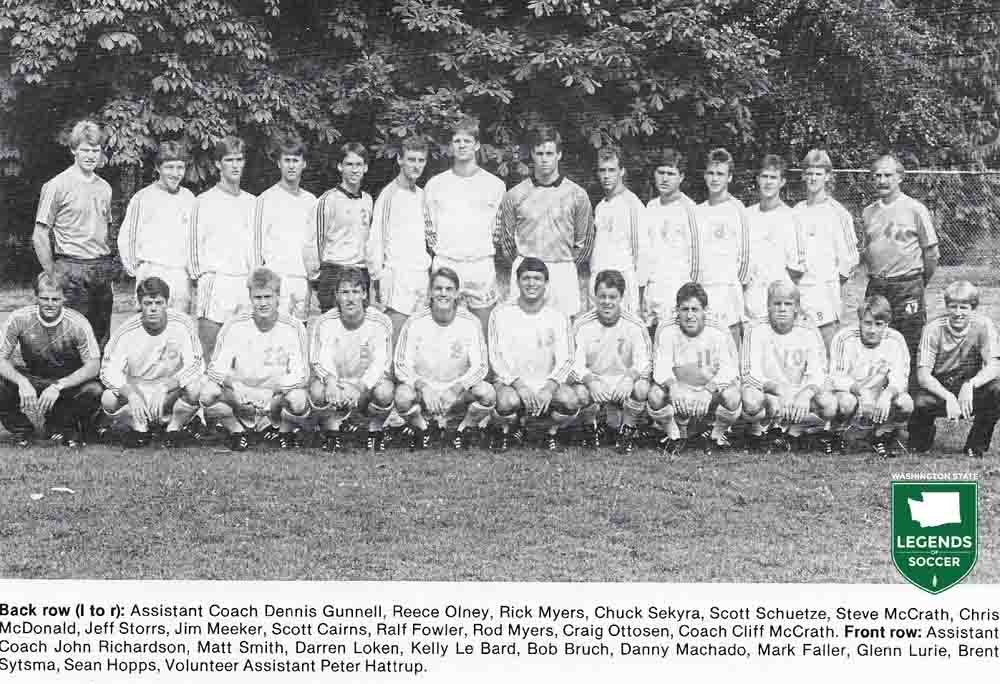 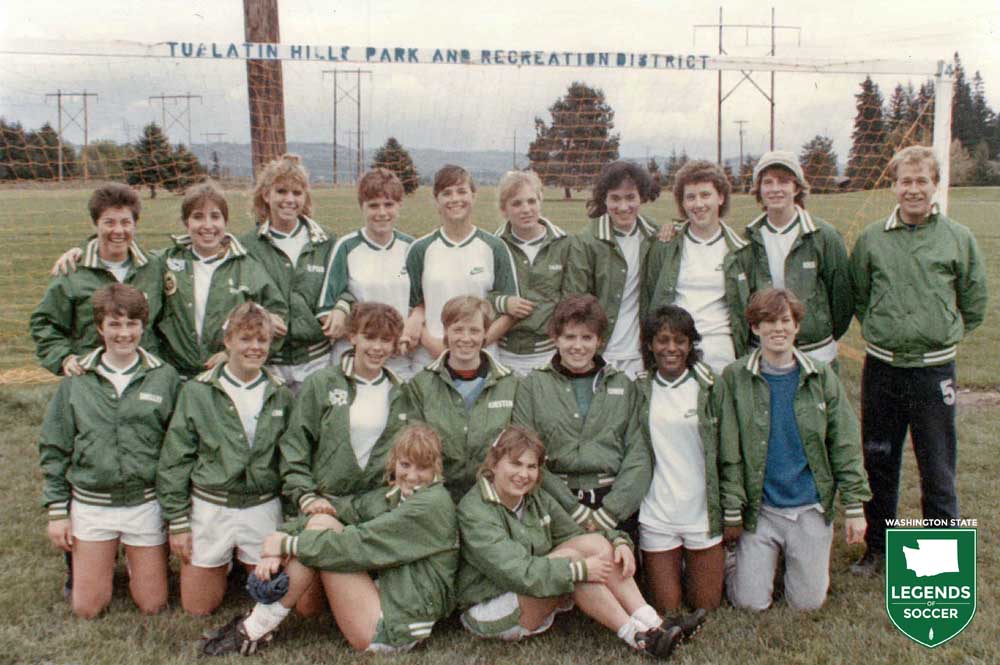 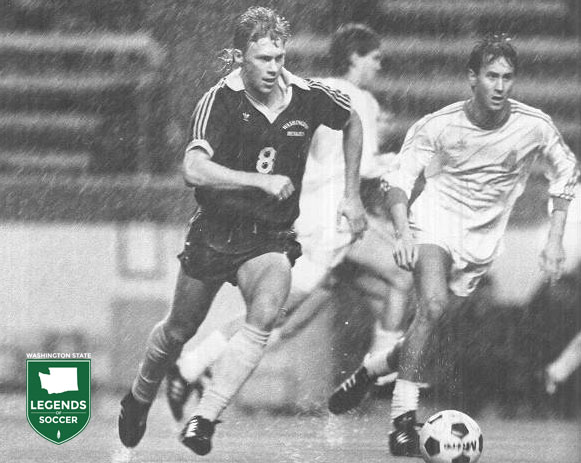 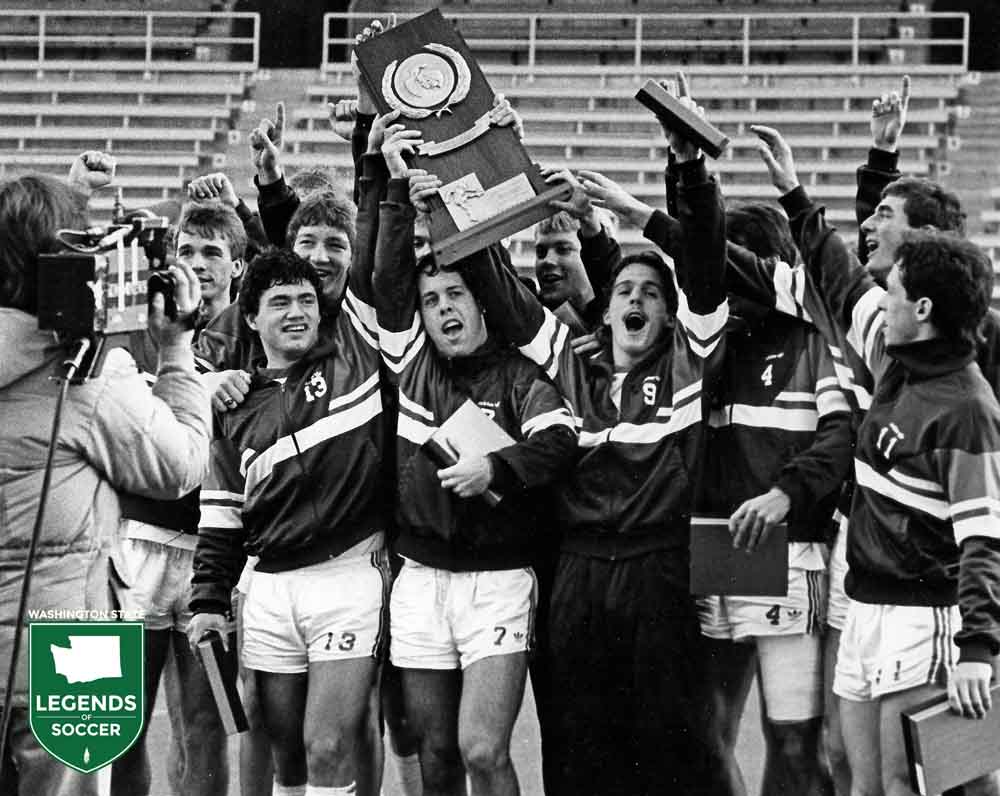 Seattle Pacific celebrates its fourth NCAA championship and the only one won at home, in Memorial Stadium. The Falcons defeat Oakland (Mich.), 4-1. (Joanie Komura photo) 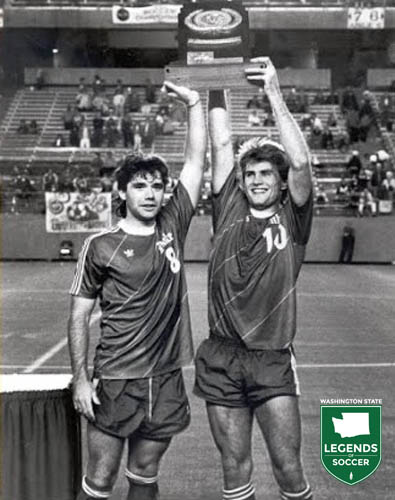 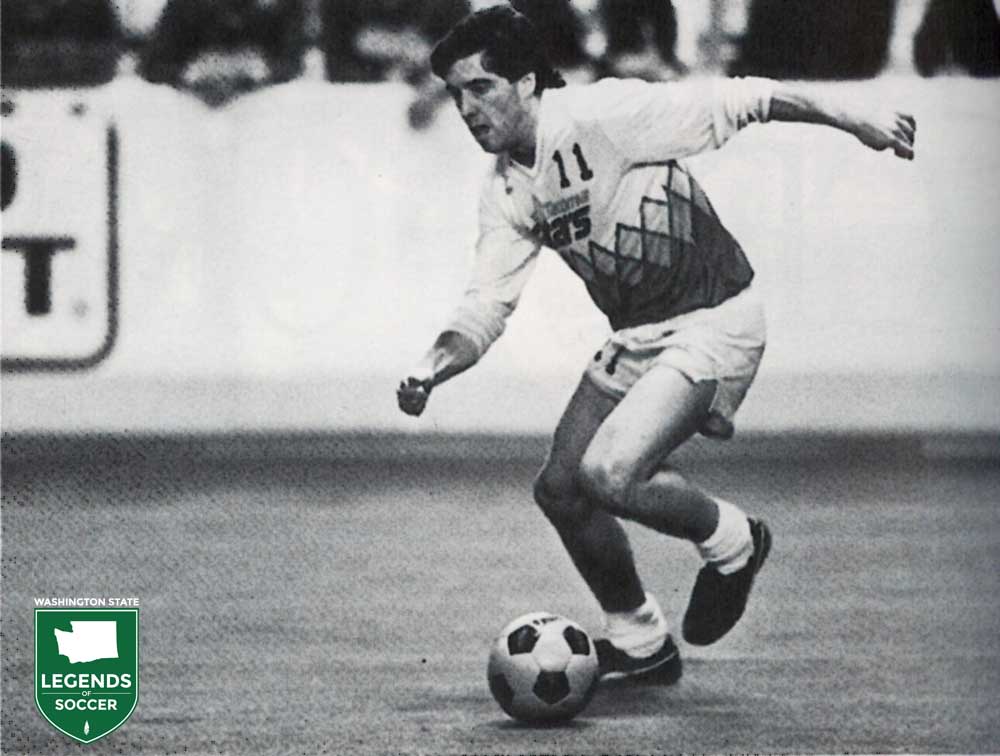 At 22, Preki begins coming into his own as an offensive force for the Tacoma Stars, scoring 41 goals in his first MISL season. 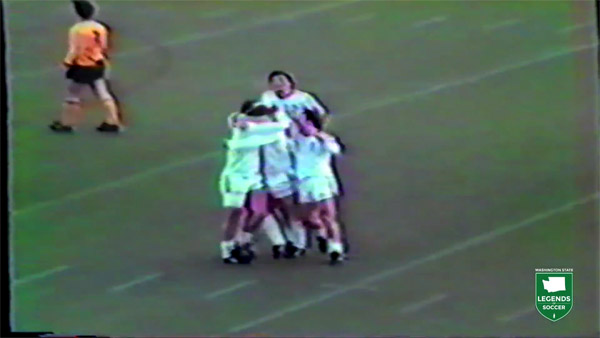 On this Day in History
WSFA officials decline to sponsor a stop by England’s touring Huddersfield Town in the spring. Huddersfield goes on to finish mid-table of the first division and plays friendlies versus local selections in Vancouver and Calgary, as well as five other cities across North America.
More from 1955 ›
Considered a bellwether for whether Seattle could support a team in one of the two new professional league, FA Cup runner-up Chelsea visits Memorial Stadium. The young Blues (oldest starters age 26), featuring $225,000 signing Tommy Baldwin, beat the Northwest All-Stars, 5-0, before a crowd of 6,400.
More from 1967 ›
Chris Henderson announces he will sign with the USMNT and forego his final two years at UCLA. Henderson has started the last 16 games for the U.S. He was the fourth-youngest player on the 1990 World Cup team.
More from 1991 ›
Tacoma Strikers win the first USYSA U16 boys West Regional at Steilacoom, Wash., blasting the Valley Eagles of Van Nuys, Calif., 7-3, on two goals each from John Graves and Mark Peterson.
More from 1975 ›
© Washington State Legends 2020.